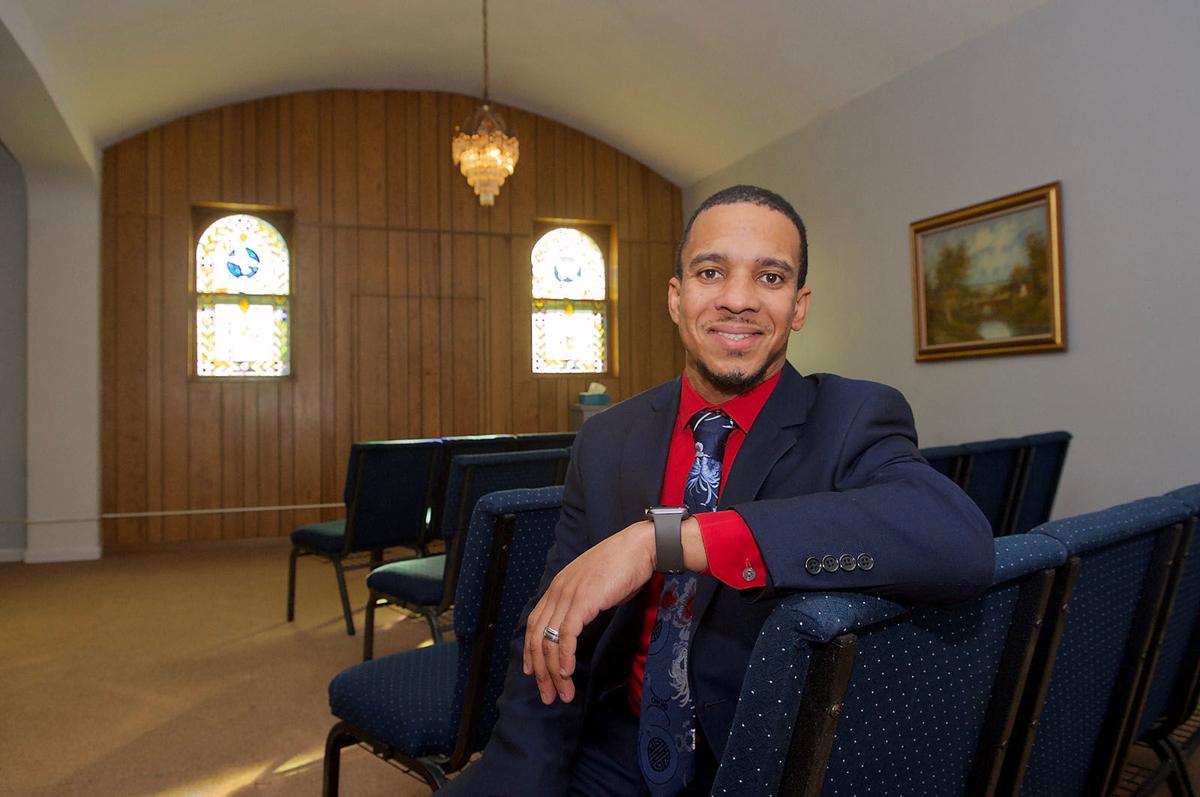 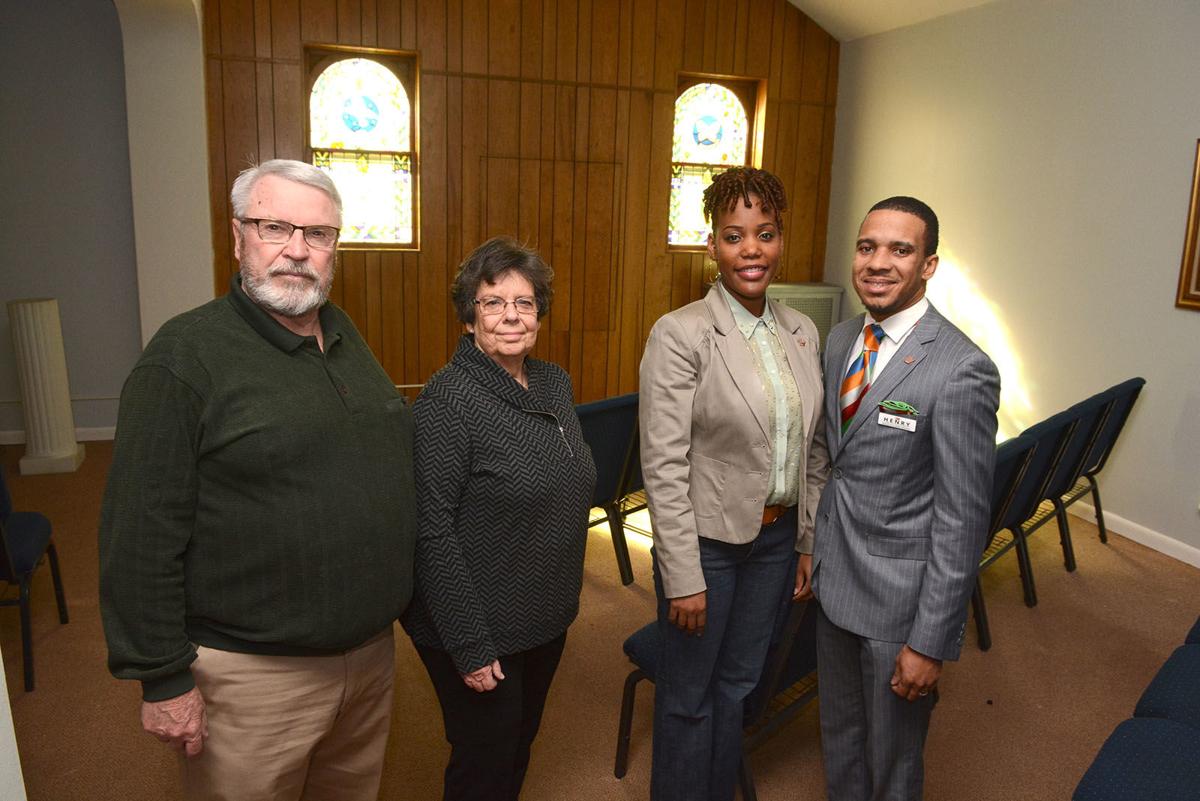 Brandon and Guankita Henry acquired Gebken-Benz Mortuary – which opened in 1886 – from Larry and Kay Benz and on December 22 opened Henry Funeral and Cremation Services at 2842 Meramec St. in South St. Louis.

Brandon Henry, age 32, opened his own funeral home on December 22, Henry Funeral and Cremation Services, which made him (as far as he knows) the youngest funeral home owner in St. Louis, as well as the only African-American funeral director in South St. Louis. Although he is bringing something new to the industry, he is also standing on the shoulders of an enormous legacy – that of the Gebken-Benz Mortuary, whose building he took over.

Gebken-Benz Mortuary was founded in 1886 and the building Henry acquired from the Benz family has been standing since 1904, so Henry spent much of his first month there renovating – “Giving it a little TLC,” as he said. He excitedly pointed out some of the architectural features of the Meramec Street building – arched plaster ceilings, large wooden doors, and stained glass with little hourglasses on it. However, Henry has changed some features of the building, such as removing the dated carpet from the hallway and repainting some of the rooms.

Though Henry is young, he has a long history in the funeral services business, dating back to when he was 17 years old. As a high school student, he interned at Wade Funeral Home.

“I guess the passion for serving people just evolved from there,” he said. “So I just kind of went on services and just learned about how to treat people in services, and what went on at a funeral home.”

After high school, he became a St. Louis County police officer, and continued in that job for seven years. After Ferguson, however, he changed his mind about how he wanted to serve his community: through funeral services.

As Henry was on the hunt for a way back into the business, fate brought him to Larry and Kay Benz, the couple who had recently put the former Gebken-Benz funeral home on the market.

His wife’s family lives in South St. Louis, and leaving a family function he drove past the building. He was inspired to contact the family about the status of the property is – just days after they decided to sell the building.

“I got this message, and I don’t know who he is, I don’t know anything about him,” Kay Benz said, “Then he came in, and this relationship just clicked. We could sit with Brandon for hours and just yak yak yak – about the industry, and how it’s changed, and our families.”

When Kay, Henry and Larry Benz sit together, their conversation flies back and forth, referencing people in the neighborhood, different funeral home directors, and how their children are doing (Henry’s first child was born while he was in negotiations to buy the building).

“We’ve had other people come in that were funeral directors, a couple of them, and it was just like, ‘No, we don’t really want this,’” Larry Benz said. With Henry, by contrast, he said, “We could tell what kind of funeral director he would be. Not a fly-by-night guy.”

Though the Benz family legacy in funeral services will not be carried on by their own sons (who now work in business and IT), they were able to find someone to carry the 131-year legacy of the Gebken-Benz funeral home into the 21st century. Henry plans to add some things to the funeral home to make it more amenable to millenials, such as Wi-Fi. “You go anywhere else, you just expect a business to have Wi-Fi,” Henry said. “And most other funeral homes don’t have Wi-Fi. They may not even know what Wi-Fi is.”

Henry and the Benzes have talked at length about changes in the funeral industry over the years. They agree that the amount of time spent on visitation tends to be shorter now, and that cremations are more popular. But, as Kay Benz puts it, “The traditional funeral’s always been going on, and still is.”

Henry is aware of his role as a supporter of families going through one of the hardest things to do: laying a loved one to rest. As such an important part of the community, he spent much of his first month on the job getting as involved with the neighborhood around him as possible.

Henry is trying to be that pillar of the community by meeting with all neighbors and knocking on doors. (He spoke with the principal of the school down the street the day after his interview with The American.)

“By me being the only African-American funeral director in South St. Louis, I think it’s very imperative that we be a business that is involved with education, and involved with other issues that may deal with the community in this neighborhood,” Henry said.

That community involvement has already extended to his hiring people from the neighborhood.

“I had a lady across the street, she knew that we were new and she just wanted to know what she could do,” Henry said. “She was like, ‘I can clean, or something!’ So she came by yesterday and cleaned the funeral home, so we’re already hiring people in the neighborhood. She was a godsend.”

For Kay and Larry Benz, letting go of Larry’s great-grandfather’s funeral home has been emotional. Larry grew up around the funeral business, and then watched his own children grow up in and around Gebken-Benz funeral home. “They grew up playing funeral director,” he said. But they are enjoying not having to care for the property anymore.

“Just, like, the other day, it was calling for ice, and I was thinking, ‘Boy, I don’t have to run down and throw salt down,’” Larry laughed, and Henry interjected, “I mean, you still could if you want to! Don’t let me stop you.”

“I left you a couple bags of salt back there,” Benz said, to which Henry replied, “I know, and they came in handy!”

It’s not just maintenance tips being passed on from Benz to Henry – Henry says that many of the families who have come to Gebken-Benz funeral home for generations have called and said they still want to work with him.

Henry also sees this as a match made in heaven: “I walked in and, well, you can feel the love in this building.”

On being a blessing