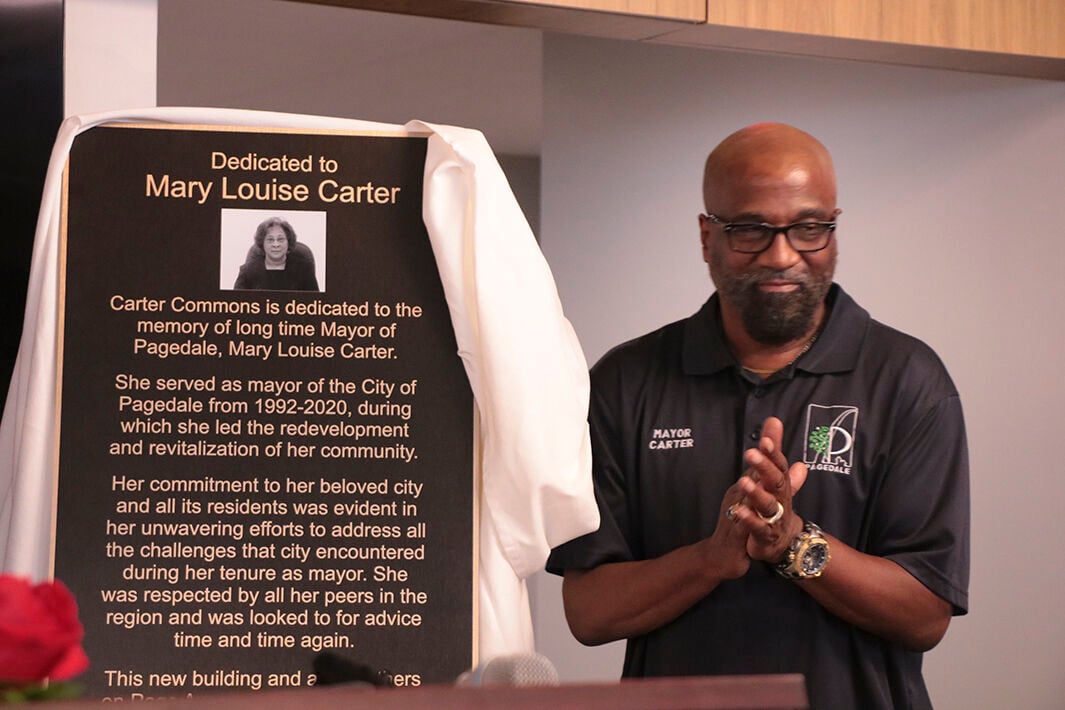 Danny Carter with the plaque of his mother Mary Louise Carter at the grand opening of Carter Commons in Pagedale on Saturday, July 31. 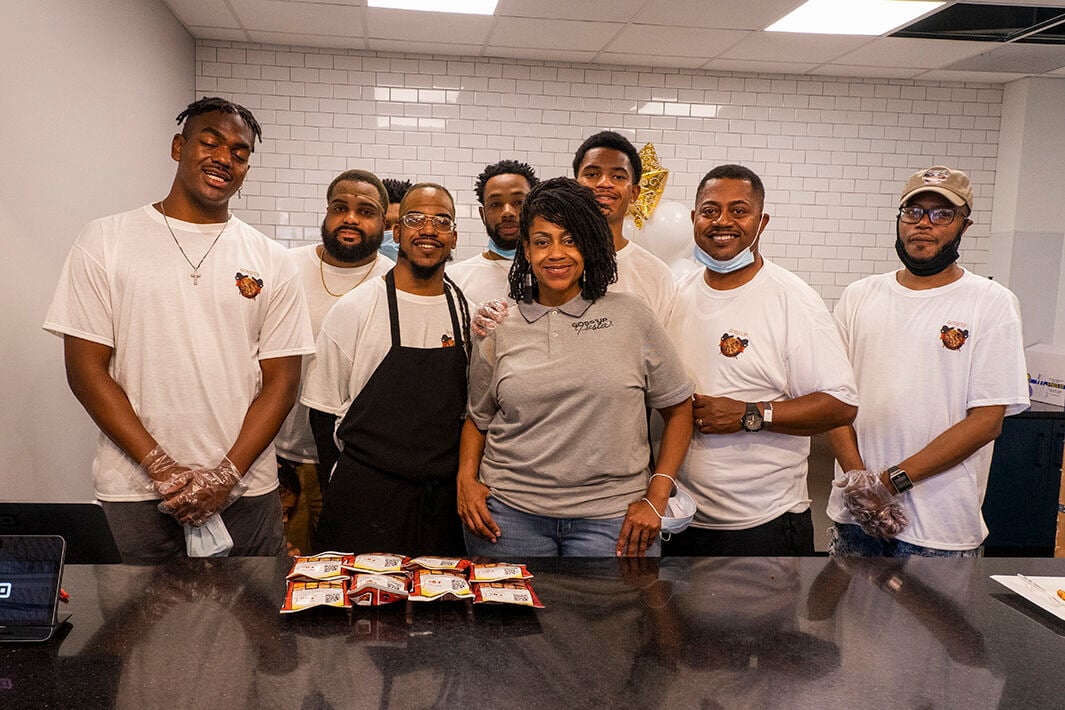 Quiana ‘Queen’ Chapple, owner of Goss'up Pastas Catering, LLC in the grey shirt is surrounded by her staff on Saturday, Jul. 31, 2021, at the grand opening celebration for Carter Commons in Pagedale. 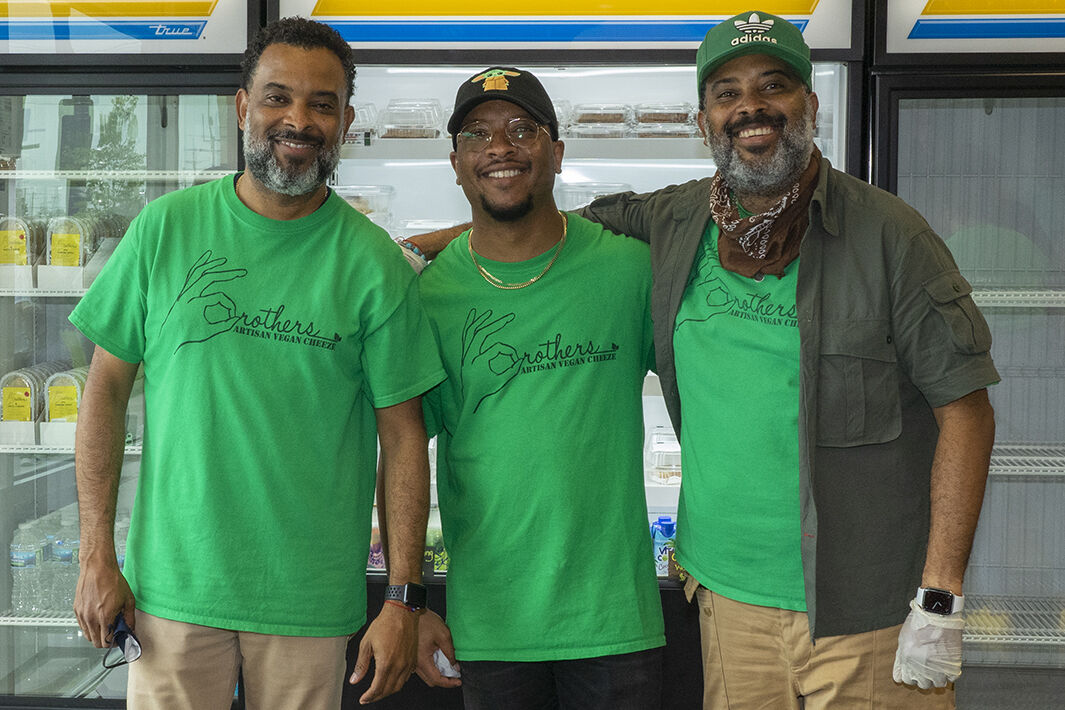 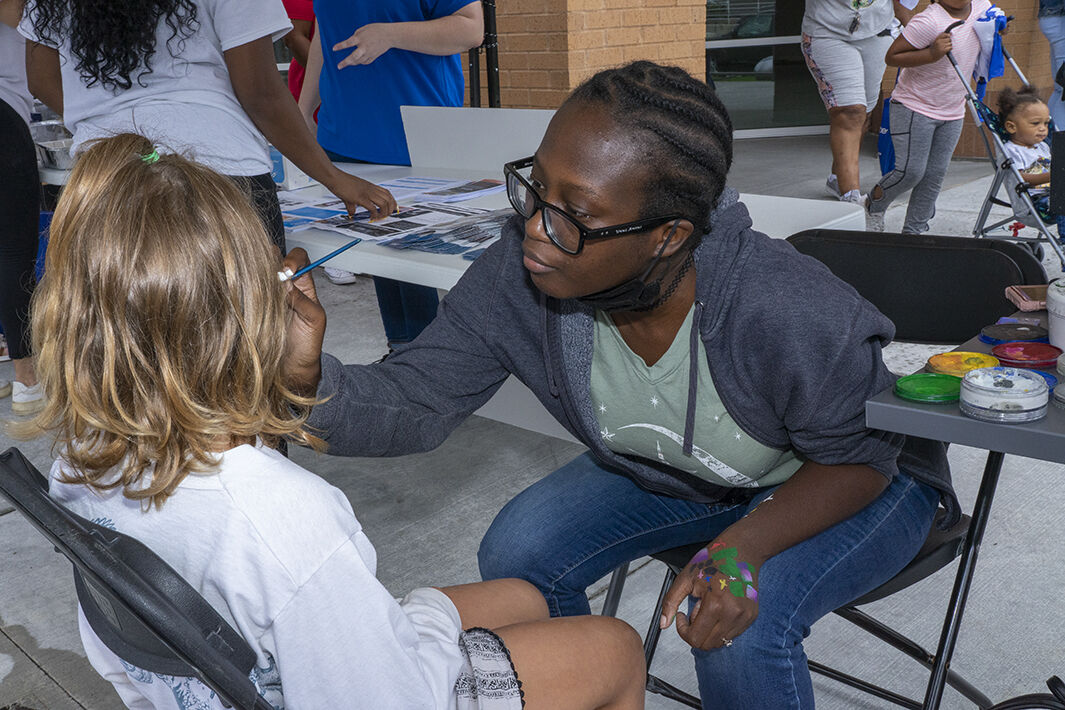 Qiuana “Queen” Chapple has operated restaurants in the Jamestown, Chesterfield and West County malls and her Goss’Up Pasta is now part of the growing Pagedale downtown business community.

“Two years ago, Beyond Housing reached out to me and asked if I wanted to take a spot in the revitalization program,” Chapple said during the center’s grand opening on July 31.

“I ended up joining the team. It has been everything and more than I expected.

Chapple grew up near the Carter Common location at the intersection of Page and Ferguson Avenues in Pagedale.

Goss’Up will offer catering, as well as serve meals in the Carter Commons food court and a second-floor event area called “A Meeting Place.”

Six of the seven inaugural business in Carter Commons are minority owned, according to Beyond Housing.

The seventh, Propel Kitchens, is a new nonprofit commercial kitchen that will teach participants skills and knowledge that could lead to culinary careers. It will also be a production partner for other Carter Commons businesses.

Marlon Austin, who owns Three Vegan Brothers with his brothers Mark Austin and Brian Austin, said communication and facts were important in their decision to open in Pagedale.

“I was so impressed with all the studies that were completed on this community (by Beyond Housing) and all the information that was presented when they reached out to us about this location,” Marlon Austin said.

“We focus on helping heal our community. No white flour. No sugar. Those our killers in our community,” he said.

While Beyond Housing has a $75 million investment in Pagedale redevelopment, President and CEO Chris Krehmeyer said the community is making it happen.

“This is not a Beyond Housing idea,” he said.

“This is community built. This is how you build community. Everything that is here, is here because the community said it wanted it to be.

“It’s not about one building. It’s about being transformational, not transactional.”

Carter Commons is named for longtime Pagedale Mayor Mary Louise Carter, who died in 2020. Carter served as mayor from 1992-2020. Mayor E.G. Shields was elected in 2020.

“Mayor Carter is saying, ‘this is not the end. There is plenty of work to be done,” Shields said.

Burn 365 Fitness is owned by kinesiologist and former Pagedale police officer Shameka Smith. This is the company’s second location and offers group training and personal coaching.

The clothing boutique Girlfriend’s Closet, which carries unique, small-quantity styles. It is a second location for owner Brittany Wayne, following the first at 3236 Parker Road in Florissant.

Healthy Habits Smoothies was established in 2015 and is also owned by Brittany Wayne. The Pagedale shop will offer smoothies, protein shakes, smoothie bowls, salads and breakfast.

Missouri Home Health and Therapy, founded by Dionneshae “Dionne” Forland in 2005, provides physical, speech and occupational therapy and skilled nursing services. It also offers state-funded in-home care and consumer-directed services. Its office is on the second floor of Carter Commons.