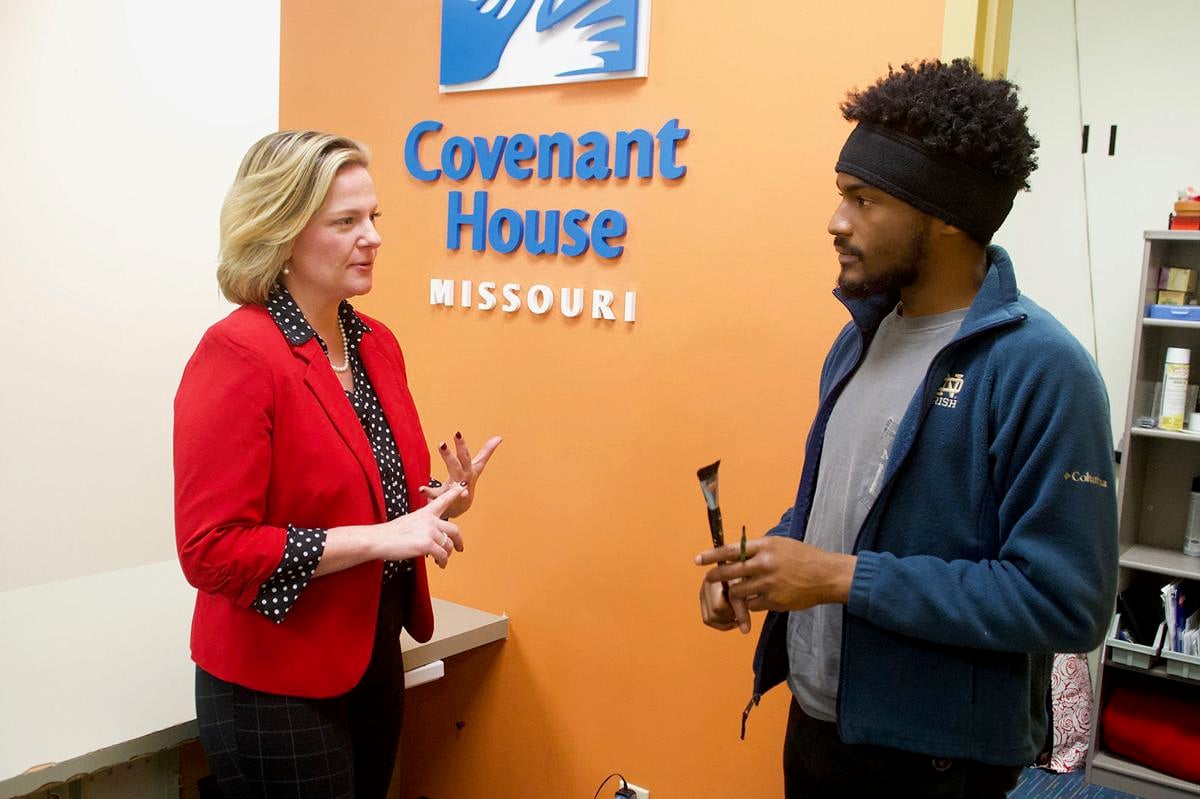 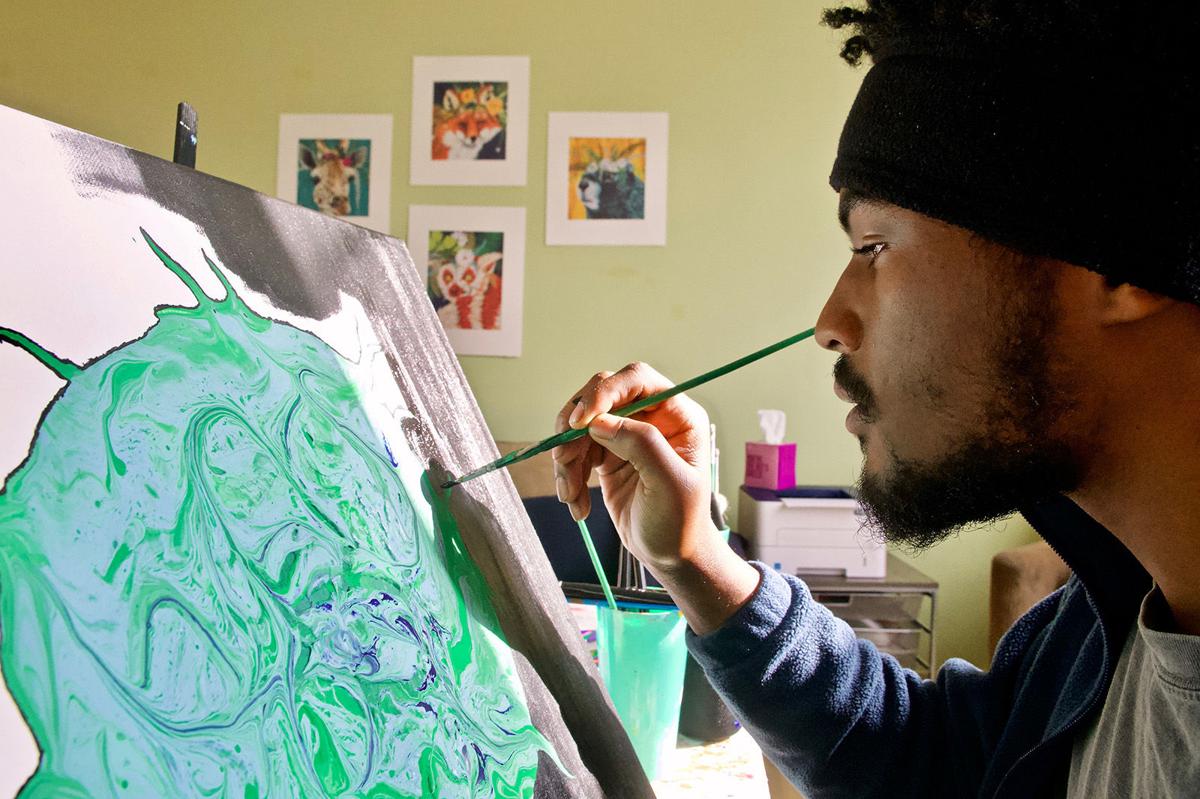 Joe Robinson, 22, a resident in Covenant House’s Transitional Living Program, relaxes by working on a painting. He appreciates Covenant House’s familial atmosphere. “It makes a lot of people feel safe,” he said.

Jessica Erfling, CEO of Covenant House Missouri, estimates that there are between 600 and 1,000 young people sleeping on the streets every night in the St. Louis area. She would know: Covenant House is nearing its 20th year of work to bring that number to zero.

Covenant House Missouri, an affiliate of Covenant House International, was established in 2001. It offers 24/7 crisis housing for young people between the ages of 16 and 24, along with additional emergency shelter whenever the temperature is above 90 degrees or below 30. It also has a more long-term housing program, the Transitional Living Floor, which can house young people for up to 24 months, though this program only has 20 spots due to limited space. Its population hovers around 75 percent African-American.

Covenant House also offers several services that help young people to get and retain their own housing through stable jobs and good emotional and physical health.

One of the young people taking advantage of those services is Joe Robinson, who is 22. He has been living in Covenant House’s Transitional Living Program since September and recently landed an internship at LaunchCode, which trains people in coding and helps them get a job in tech. He is one of three young people who have landed jobs through Covenant House’s career services recently – two through LaunchCode and one as a sterile processor with BJC HealthCare.

Robinson was connected to LaunchCode through Covenant House CEO Jessica Erfling. He asked for a meeting with her shortly after arriving at Covenant House, he said.

“I didn’t want it to be just sitting down and us talking. I had to think of something to do,” Robinson said. “I said, ‘I just found a chess board. Do you play chess?’ And she said no, so I said ‘We can meet, and I’ll teach you!’”

At that first meeting, he told Erfling he wanted to be a programmer, and she connected him with LaunchCode leadership through Covenant House’s career support services.

Now, Robinson and Erfling are engaged in an ongoing chess competition, though by Robinson’s account he still usually wins.

“I was kicked out of the house the day after Christmas,” Robinson said. “It was a little bit messed up. I was couchsurfing for a little bit. I was 19, 20, 21 – just trying to find my way. And then finally, once I ran out of options of places to go, I stopped being stubborn and came to this place. I was accepting help, accepting that I’m not in the position that I’d like to be in, and the longer I wait to do something about it, the harder it’ll get.”

When he came to Covenant house, Robinson said, he was struck by the familial atmosphere. “It makes a lot of people feel safe,” he said.

Covenant House employs two full-time career support professionals. One of those people is Patricia O’Brien. For her, youth homelessness is personal – at one point in her life, she, like many of the young people spending time at Covenant House, was unhoused because her full-time minimum wage work was not enough to pay for all of her necessities. In addition, as a transgender woman, she feels a special affinity for the 40 percent of homeless youth who are members of the LGBTQ community.

“There was a young woman who came out to her parents as transgender,” O’Brien said. “I knew her from a support group in the community. She got kicked out of her house for being transgender, so that to me was just something that really hit home and was really personal.”

O’Brien splits her time between helping young people prepare resumes and get ready for interviews, and developing relationships with potential employers.

“A lot of what I run into is just stereotypes that they’re homeless youth and therefore they need jobs at, you know, fast food places,” O’Brien said. “So the big challenge is to show people that these are very competent people who can handle the good jobs – getting people to stop seeing them as people who are perpetually poor and see them as people who can get that living-wage job, just like you and me.”

Fundraising programs like Covenant House’s sleep-outs, in which people spend a night outside in solidarity with homeless youth and listen to Covenant House residents speak about their experiences, help provide connections between the nonprofit and employers for young people. Last November’s Executive Sleep Out, in which 68 executives slept outside in the Covenant House courtyard in the rain, raised over $385,000, Erfling said. The next sleep-out will target young professionals and will be held on Friday, March 20.

Ramona Curtis, Communications specialist for Covenant House, said that they are still recruiting young professionals for this sleep-out – and for its Young Professionals Board.

“So, contact us if you’re interested in helping us build out our young professional board,” Curtis said.

“There are a lot of folks out there who want to help homeless youth, they just don’t know how,” Curtis said. “So part of what we do is we connect with them, and we let them know.”