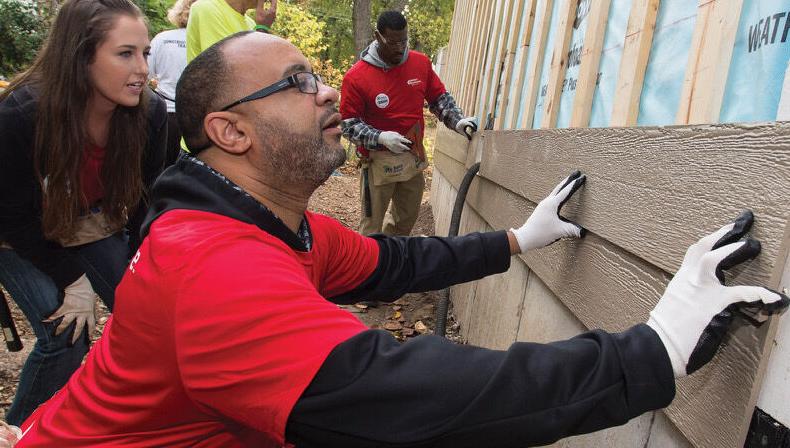 Working with Habitat for Humanity, Alex Fennoy of Midwest BankCentre helps build a home in University City in 2018. The Bank had about 15 volunteers joining the project, including  Steven Manning (in the background), an assistant branch center leader. 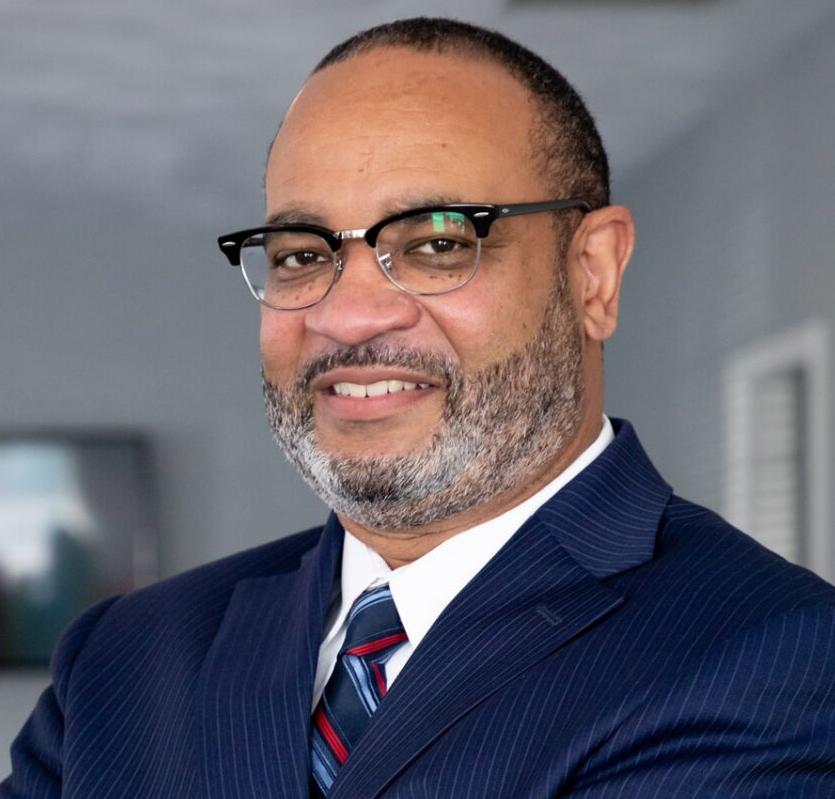 St. Louis-based Midwest BankCentre, a major community bank with more than  $2 billion in assets, plans to make $200 million in community and economic development loans over the next five years, with up to 80% of the money being spent in the St. Louis metro area, a bank executive told the American.

Announcement of the lending program, which kicks off in 2021, comes as activists push corporate leaders to address the pernicious impacts of racial and social inequality, and as the nearly year-long global pandemic pushes many small businesses into bankruptcy.

While the initiative is not a direct result of the devastation of 2020, the year’s events did put the need for action into sharper relief, creating a greater sense of urgency.

“We were talking about it before 2020,” said Alex Fennoy, the bank’s executive vice president for community and economic development.  “My feeling is that it would not have been as aggressive without being in the midst of everything that 2020 has been.

“I don't think it would have, to be honest. [The year] had, in my opinion, a very positive effect in pushing me and others to think ‘how much more can we help?’”

The announcement also comes weeks after the American Bankers Association Foundation awarded its sixth annual George Bailey Distinguished Service Award to Fennoy, 52, and co-winner Detra Miller, of M&T Bank, for their efforts to expand banking services to underserved communities. The association’s highest individual honor is given to a non-CEO banker who has shown “outstanding initiative, effectiveness and inspiration to others.”

“At a time when our industry is looking for meaningful ways to expand access to banking and promote financial inclusion, Detra and Alex provide incredible examples for other bankers to follow,” Rob Nichols, ABA president and CEO said in a statement.

The award is named for the irrepressible character played by Jimmy Stewart in the Christmas movie “It’s a Wonderful Life,” who was motivated largely by his love for his hometown.

Fennoy grew up an only child in East St. Louis. He sees the lending initiative as an extension of work he began when he joined the bank in 2010, focusing on historically underserved communities. He joined Midwest following a career in commercial lending at major institutions including PNC, Regions Bank and Bank of America.

"Our goal at Midwest ... is always, always a big tent philosophy,” he said. “How can we bring in more people and businesses that have been out of mainstream banking? How can we bring them in and do our part to help revitalize and bring historically disinvested neighborhoods, areas [and] communities up to the level that they ... want to be?

“We want to be a part of those that spur economic development.”

When Fennoy joined the bank he said his initial focus was on reaching area residents who used expensive check cashing and lending services — which can lead to more than $1,000 annually in fees and other costs —  rather than establishing a relationship with a commercial bank.

He also helped foster partnerships that resulted in profitable bank branches being established in the largely Black community of Pagedale and at Friendly Temple Church in the Wells-Goodfellow neighborhood of north St. Louis.

As part of the SBA’s Paycheck Protection Program, launched in response to the coronavirus pandemic, the bank made more than $206 million in loans. Nearly 90% of the 1,400 loans were issued in amounts under $150,000, he said.

“We really got to the heart of what the program was intended to do,” Fennoy said.

Though most of the loans will be issued with market-level interest rates. Fennoy said businesses and organizations will benefit through increased access to capital, which will add to the tax base and help spur job creation.

The program will focus on lending “because that's the key for people having success,” in low- to moderate-income areas or to businesses owned by minority individuals, Fennoy said.

The bank board “is saying ‘Alex, we trust and believe in what you're doing’ and ... it's just inspiring to be able to have that.