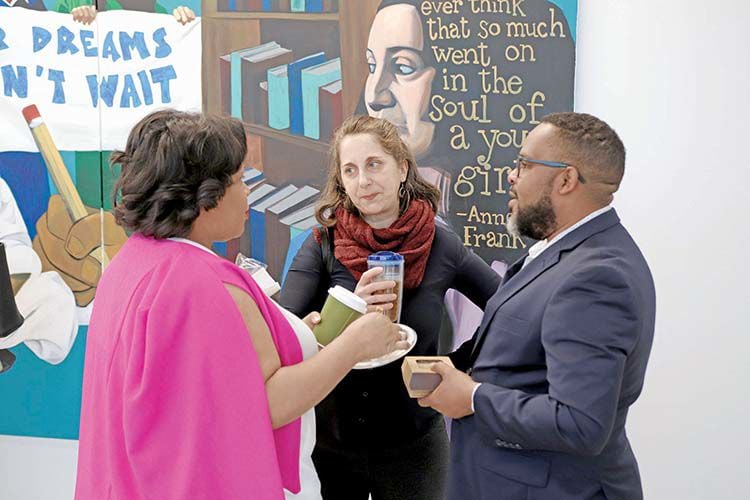 Ellicia Lanier, Katie Kaufmann, and Julius B. Anthony visited at WEPOWER's launch of “The Early Childhood Education Playbook” at the Deaconess Center for Child Well-Being on January 9. 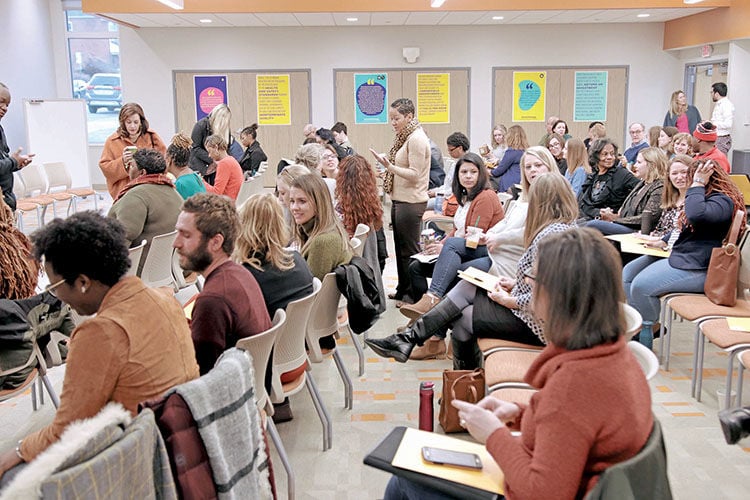 The 14 WEPOWER Tomorrow Builders fellows recently released a report titled “The Early Childhood Education Playbook: A Saint Louis Community-Led Response to the First Step to Equity Report.” The fellows, a majority of whom are women of color and educators, spent the past year speaking with over a thousand St. Louis community members to attempt to identify and map out solutions to the problem of early childhood education inequity.

Now in the second year of their fellowship, they are taking their plans and attempting to turn them into reality – and make it easier for black and brown educators and the children they care for to succeed in early childhood education.

The roadblocks standing in their way, as outlined in the Playbook, are numerous. For educators like Treasia Foster, who works at the Harris-Stowe State University William Lacy Clay Early Childhood Center, those roadblocks include modest pay. For other members of the Tomorrow Builders cohort, like Rochelle Bea, obstacles include struggling each year to find the funding necessary to pay the exorbitant costs of re-accreditation for her childcare center – without which she would be forced to go without accreditation at all.

The costs of teacher retention, professional development, maintenance, and accreditation more often than not fall on the educators themselves and the parents of children in the centers. This means that tuition for early childhood care is often prohibitive, which leads to a little more than half the young children in St. Louis city and county (47,219 out of 89,132 children ages 0-5) going without licensed care.

The Tomorrow Builders fellows spent a year comparing their experiences at different early childcare centers and sharing their perspectives from other roles, too – there are school board members, activists, and school district employees in the cohort, along with early childhood educators.

Fellow Rochelle Bea said that being part of such a diverse group of individuals made her realize that inequities in education are not just something to be put up with, but rather something to be changed.

“I grew up in North St. Louis, I’m familiar with North St. Louis, so it’s just numb to me that different parts of the city get different services,” Bea said. “At first, I just thought we had to suffer through it.” But working with the other Tomorrow Builders gave her hope: “To work with a group of individuals that demanded that all children be offered the same opportunities was great.”

In the Playbook, the Tomorrow Builders fellows call for the creation of a new nonprofit to coordinate center regulation and development and share resources, knowledge, and data between early childhood educators across the area. Some coordinating nonprofits attempting to fill that role have existed recently.

The Playbook states that the St. Louis Regional Early Childhood Council, which was founded in 2017, disbanded last July, though its parent nonprofit, Vision for Children at Risk, still exists. This leaves an opening for a broad, region-wide coordinating nonprofit, which is what the Tomorrow Builders hope to create – this time, “with a new leadership structure, particularly with greater representation from those impacted by the system.”

“This should be a community-led organization that sets a strategic agenda to both strengthen and grow the current early childhood education (ECE) system, as well as magnify the importance of ECE by increasing public awareness,” they explained in the Playbook. “[The nonprofit] should be charged with system design and implementation, as well as advocacy.”

Joey Saunders, director of the Tomorrow Builders fellowship, said that this as-yet-unnamed nonprofit may be more than just an idea, though with interest from potential funders, it could be established as early as this year.

“We actually have attracted interest from funders,” Saunders said. “Because this whole thing has been seen as such an energizing and inspiring effort, people are actually willing to invest in these community members and the vision we co-created.”

In addition to the creation of a coordinating system, the Tomorrow Builders are advocating for a future in which more government money is brought into the early childhood education system, so the burden does not fall so entirely upon parents and educators. Right now, though many programs are technically state-funded, “Missouri has one of the lowest reimbursement rates in the country,” according to the Playbook. That means early childhood educators and parents are left to bear the brunt of costs, without the reimbursement that they would need to break even.

Tomorrow Builder Adrienne Pennington, for example, has to pull together funding from many different sources to keep her childcare center afloat. “You just have to know how to budget, and raise funds and use other resources, financially,” she said. She often relies on in-kind donations and is forced to borrow money to make ends meet.

In the county, they propose a one-cent sales tax to be directed towards early childhood education centers. In the city, where a sales tax is, according to the playbook, “not an option,” they suggest a 2 percent budget allocation in the upcoming fiscal year.

As far as a St. Louis city tax proposal goes, the Tomorrow Builders said it would cost a family making $25,000 a year about $93 in taxes per year. “If that same family has a child 0-5 who benefits from this program by being in high-quality ECE, their maximum return on investment stands to be $20,353 each year,” they state. The county proposal would have a similar outcome.

The Tomorrow Builders cohort have received positive feedback on their plan from community members at their various early childhood centers and educational establishments. Now, as they enter the second year of their fellowship, their challenge will be to mobilize their communities to make it happen.

“Everybody’s ecstatic about it,” said Bea. “They’re very excited, especially as it relates to the north of Delmar situation. It takes a special person to care for children, and I think this industry just wants to be respected.”

In the end, Bea said, the point of this effort is not just to enhance kindergarten readiness: it will make St. Louis a safer place to live, too. Children who receive high-quality early childhood education, she pointed out, are 70 percent less likely to be arrested by age 18.

“Once we start teaching at a very early age for children to have empathy for others, effectively communicate, use their words to think and be positive and secure in their actions,” Bea said, “then it’s a solid foundation to make the city safer.”

The full text of the Tomorrow Builders “Playbook for Early Childhood Education” can be found at https://www.wepowerstl.org/tomorrow-builders-fellowship.

A slight return to your regularly scheduled programming

Is Kanye’s presidential run a tactic to help Trump?