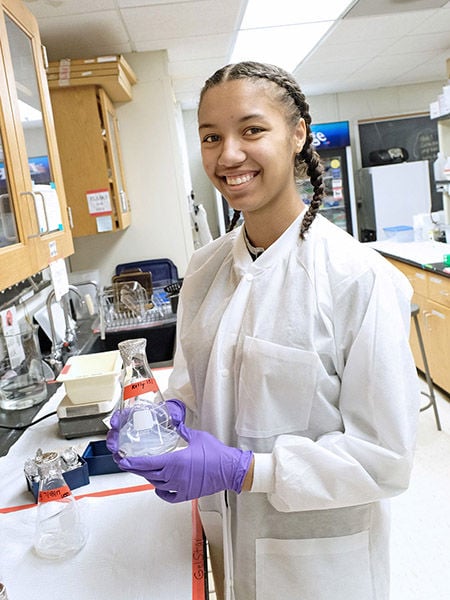 Kelly Warren, a student at Jennings High School, tested Galapagos bird DNA for the parasite that causes avian malaria in Patty Parker’s lab at University of Missouri–St. Louis this summer. A generous anonymous donation made the program free for 13 Jennings students and paid each $12 per-hour as interns. “I feel more imaginative than I did before,” Warren said, “like I’m starting to think of different relationships between animals, like the geese on campus, for example.” 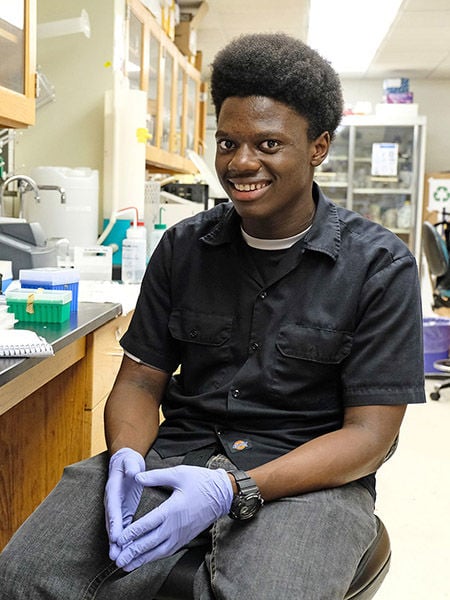 David Friend, a student at Jennings High School, worked this summer at University of Missouri–St. Louis as a paid intern in both a chemistry lab and a joint biology and physics lab. In the biophysics lab, he earned a co-author credit on the lab’s research paper for an academic journal testing extinction points for yeast.

Kelly Warren, a student at Jennings High School, tested Galapagos bird DNA for the parasite that causes avian malaria in Patty Parker’s lab at University of Missouri–St. Louis this summer. A generous anonymous donation made the program free for 13 Jennings students and paid each $12 per-hour as interns. “I feel more imaginative than I did before,” Warren said, “like I’m starting to think of different relationships between animals, like the geese on campus, for example.”

David Friend, a student at Jennings High School, worked this summer at University of Missouri–St. Louis as a paid intern in both a chemistry lab and a joint biology and physics lab. In the biophysics lab, he earned a co-author credit on the lab’s research paper for an academic journal testing extinction points for yeast.

Opportunity. That’s what 13 Jennings Senior High School students will tell you was afforded them this summer at the University of Missouri–St. Louis.

The juniors and seniors held paid internships and conducted six weeks of collegiate research alongside UMSL professors and graduate and undergraduate researchers.

Previously, the program specialized in biology, chemistry, physics and psychology internships, but this year it expanded to include the fields of music and education as well.

A generous anonymous donation not only made the program free for the students but also paid for the $12-per-hour income each intern earned. The support allowed them to pursue academic interests full time in lieu of a summer job.

Many of these students come from single-parent households and help out with family finances where they can. It could be a challenge to afford similar pre-collegiate summer programs that cost easily in the thousands of dollars but are the exact opportunities these college-bound high school students seek out.

“I wanted to help provide the same kinds of high-quality experiences that students from more affluent districts have,” Parker said. “These students are truly gifted and mature beyond their years. They can focus and master highly technical skills. They have tenacity, curiosity and grit, on top of their innate talents.”

“Beeing fly in the lab,” the title to the final presentation on Kyrnn Peoples’ research, might come as a surprise to those that know Peoples. He’s not the biggest fan of bees.

Even so, he spent the summer studying bumblebee and fruit fly cognition in the lab of Assistant Professor of Biology Aimee Dunlap. Specifically, he tested the insects’ decision-making, memory and learning using homemade flowers filled with nectar and observing the insects’ flower preference.

Peoples came to the summer internship program to gain more science experience. It was first suggested to him by UMSL alumnus and Jennings Superintendent Art McCoy, who has mentored Peoples since he came to Jennings High School after twice switching schools.

Beyond gaining science experience, Peoples found one of the best outcomes of the program was gaining other perspectives.

“At Jennings it’s majority African-American, but here there are backgrounds from all over. I met people from the Galapagos, South America, just all over,” he said.

Peoples intends to go into engineering and is considering bioengineering after his internship experience.

“I’ve enjoyed every last week,” Peoples said. “New experiences every day, and it helped me get over my fear of bumblebees too.”

“I’ve always gotten either an A or B in it,” she said. “I just like to see how things work on Earth and different outcomes.”

This summer Jackson researched gene regulation in cyanobacteria in Professor of Biology Teresa Thiel’s lab. She learned about DNA transcription, creating cytoplasmas and the cloning process.

Looking to the future, Jackson wants to work with children and possibly apply her science skills as a pediatrician or pediatric nurse. She’s also considering traveling the world to help children globally.

“I’m interested in what other struggles are out there,” she said. “And not only struggles, but what people can do to become successful mentally with all the obstacles that come their way.”

No matter what, Jackson knows she’ll need a college education. She’ll be the first in her family to earn a degree.

“Growing up, nobody ever went to college,” she said, “so I just want to do something different, not repeat the same cycle everybody else repeated.”

A returning intern, David Friend worked on two separate projects, trying his hand at a chemistry lab this summer while continuing in the joint biology and physics lab in which he had previously worked.

“I chose this program because I wanted experience in an actual research lab,” Friend said. “It’s also a really good learning experience both for working with professors and seeing what campus life is like.”

In chemistry, Friend interned in the lab of Professor Eike Bauer, analyzing reactions and testing catalysts’ efficiencies. The research involved determining at what temperature and energy level a catalyst operated most effectively, helping increase production.

In biophysics, Friend worked with Associate Professor of Biology Wendy Olivas and Professor of Biophysics Sonya Bahar to simulate an extinction project using yeast. He set different parameters to test and find the exact turning point at which the yeast would live or die.

Not only did Friend contribute to the project, but he also learned this summer that he’ll be a co-author on the lab’s research paper for an academic journal.

“I never would have thought I would have my name on paper, especially at 17,” Friend said.

Friend isn’t yet decided on a career or field of study, but he’s set on one thing for sure – he’s going to college.

This summer Nykayla Sampson faced her internship like a challenge.

An aspiring screenwriter, she could have taken the comfortable road and chosen an internship outside of the sciences. Instead, Sampson chose to intern in the microbiology lab of Assistant Professor Lon Chubiz.

“There’s no limit to what you can do or what you should do,” Sampson said. “You never know what you’re going to write about in the future.”

Sampson said she certainly came up with a lot of material in the Chubiz lab, where she researched Salmonella and E. coli bacteria in the protein PSLT026.

Sampson joked about the serious amounts of pipetting the research had her doing, but more than anything she said she’ll remember the independence the lab helped grow in her. After her mentors demonstrated a technique, they trusted her to do it on her own.

“It’s really triumphant when you realize what to do, with what machine, how it works and why you’re doing it,” Sampson said, “and to know you did it on your own.”

In the Parker lab, Kelly Warren tested Galapagos bird DNA for the parasite that causes avian malaria. It got her considering the world in new ways.

“I feel more imaginative than I did before,” Warren said, “like I’m starting to think of different relationships between animals, like the geese on campus, for example.”

Warren caught herself asking questions like: Is it bad for them to stay on campus, where they’re around people so much? Are they exposed to more things?

“Those questions I probably never would have thought about before getting in Dr. Parker’s lab,” she said.

Warren vacillates between wanting to be a veterinarian or pharmacist. Working in the Parker lab has tugged her back towards her love of animals. One early morning she even learned how to catch, properly hold and sample birds.