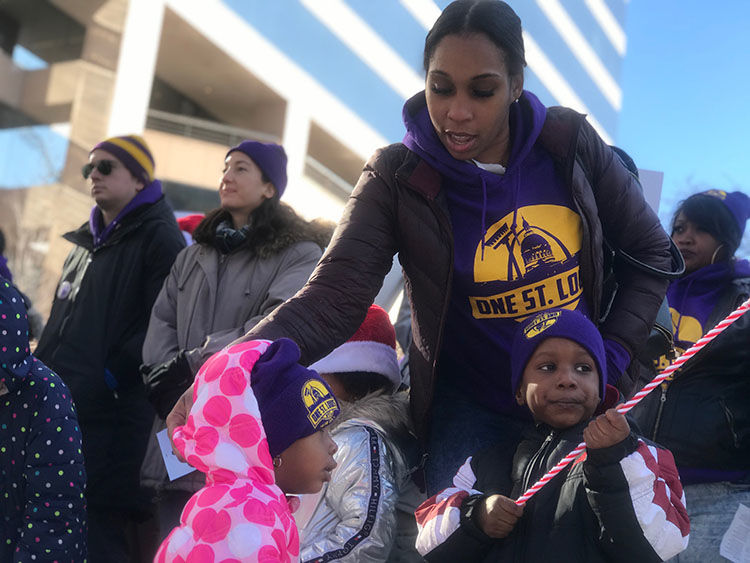 Samantha Hayes, a janitor who works at the Ritenour School District, brought her children along on a rally held December 19 that started outside Peabody Plaza then marched through downtown St. Louis. 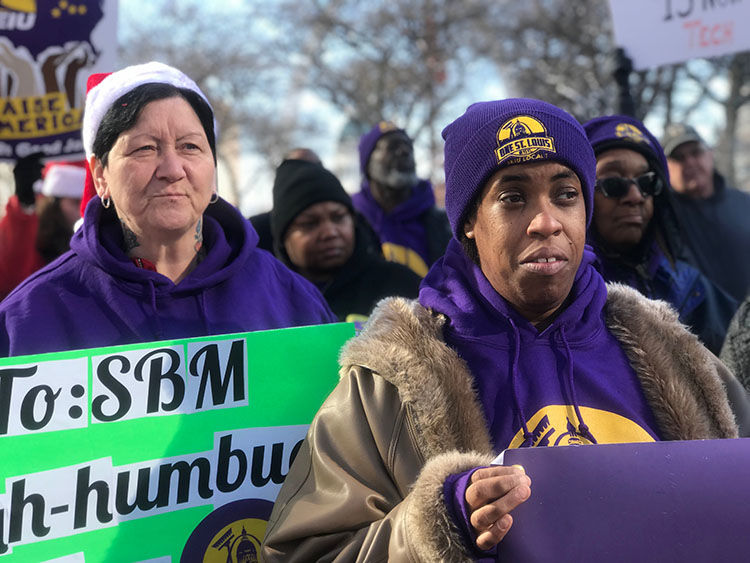 Michelle McNeal came to St. Louis a year ago to start a new life with her daughter and six-year-old grandson. She currently cleans 1010 Market St. in downtown St. Louis, while she and her family live in a homeless shelter or hotel room. Her wage is $10 an hour, and that isn’t enough for her and her family to get on their feet, she said.

“We are ordinary people, and we are trying to live a life just like everyone else,” McNeal said. “We want to maintain a life like everyone else. If you take a walk in someone else’s shoes, you won’t be so quick to judge and slow to rise.”

Since October 24, McNeal and other SEIU Local 1 janitors have been fighting for $15 an hour wages through their contract negotiations, which affect more than 2,100 janitors. Many of these janitors work at Wells Fargo, U.S. Bank, Met Square and other downtown institutions, said a union spokesman. Their contract expired on January 8 without this increase.

The St. Louis American reached out to Clean-Tech Company representatives, who negotiate the union contract, and has not yet received a response.

However, the janitors are not only fighting for themselves. On October 23, SEIU janitors joined elected officials and community leaders to kick off the “One St. Louis” campaign, which urges higher wages to protect working families.

On Friday, January 17, Mayor Lyda Krewson signed an executive order, establishing $15 per hour as the new minimum wage for all City of St. Louis Civil Service Employees. This increase will be effective mid-February. Late last year, the St. Louis Board of Aldermen voted unanimously to support a $15 wage for St. Louis janitors. Major employers and institutions, including Washington University, Target and St. Louis Treasurer Tishaura O. Jones’ office, have also announced plans to raise wages to $15 for employees.

State Rep. Rasheen Aldridge (D-St. Louis) remembers leading Fight For $15 walkouts in the spring of 2013 as an 18-year-old fast-food worker.

“People called us crazy,” Aldridge said. “Over time, low-wage workers have been able to push the narrative of what a living wage is throughout the country.”

Aldridge said he hopes the mayor’s announcement will have a positive influence for the union janitors’ contract negotiations. Janitors believe these policies will help address the economic and racial segregation preventing the St. Louis region from moving forward.

“While janitors will lead the way for One St. Louis, they will not stop until all working people — graduate workers, fast food workers, healthcare workers and more — earn the $15 and win the good union jobs they need to thrive and make our region more fair across racial lines,” according to a SEUI statement about the campaign.

Local 1 janitors who live and marched in Ferguson believe little has changed for working families in North City and North County in the last five years since the Ferguson uprising.

“With the region’s black residents three times more likely than white residents to live in poverty and the racial income gap widening in recent years, the call for $15 aligns with the Ferguson Commission’s recommendation to make the St. Louis region more equitable across racial lines, with $15.69 the average wage necessary to afford a basic two-bedroom apartment in the city,” according to the union’s statement.

The median wage for regional janitors is $10.75, leaving them struggling to put food on the table for their families, it states.

Eugene Hubbard, 70, has been a janitor for the last 20 years. He began receiving Social Security checks at 62, but it’s not enough to retire on, he said. He has seven children, 16 grandchildren and 11 grandchildren.

“My wife tells me I always wanted a baseball team,” he said, laughing.

Hubbard helps to pay insurance policies and other things for them. Many of the janitors enjoy what they do, he said, and with the current health and sanitary requirements, it’s a technical and skilled labor position.

He explained that Dr. Martin Luther King Jr. went down and fought alongside the sanitary workers for better wages.

“We are going through the same thing,” Hubbard said. “And it will help your community because the more money you have, the more you can spend in the community.”

An ‘aggressive call’ for nonviolence: Coalition plans marches for peace on MLK Boulevards in STL and ESL