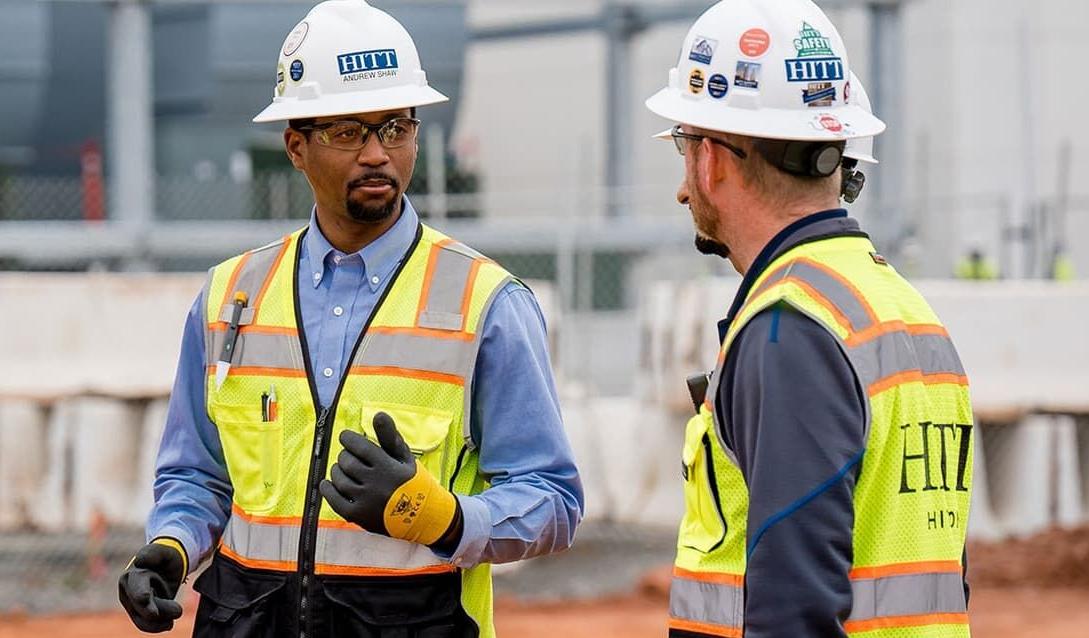 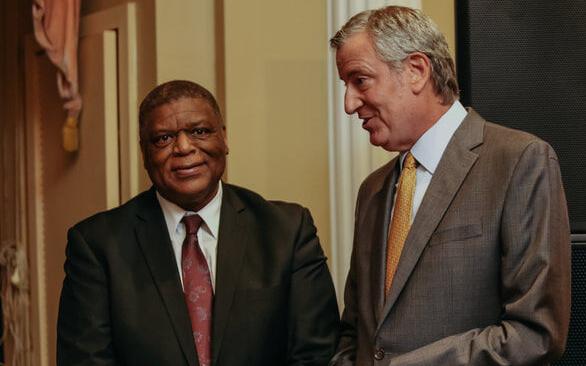 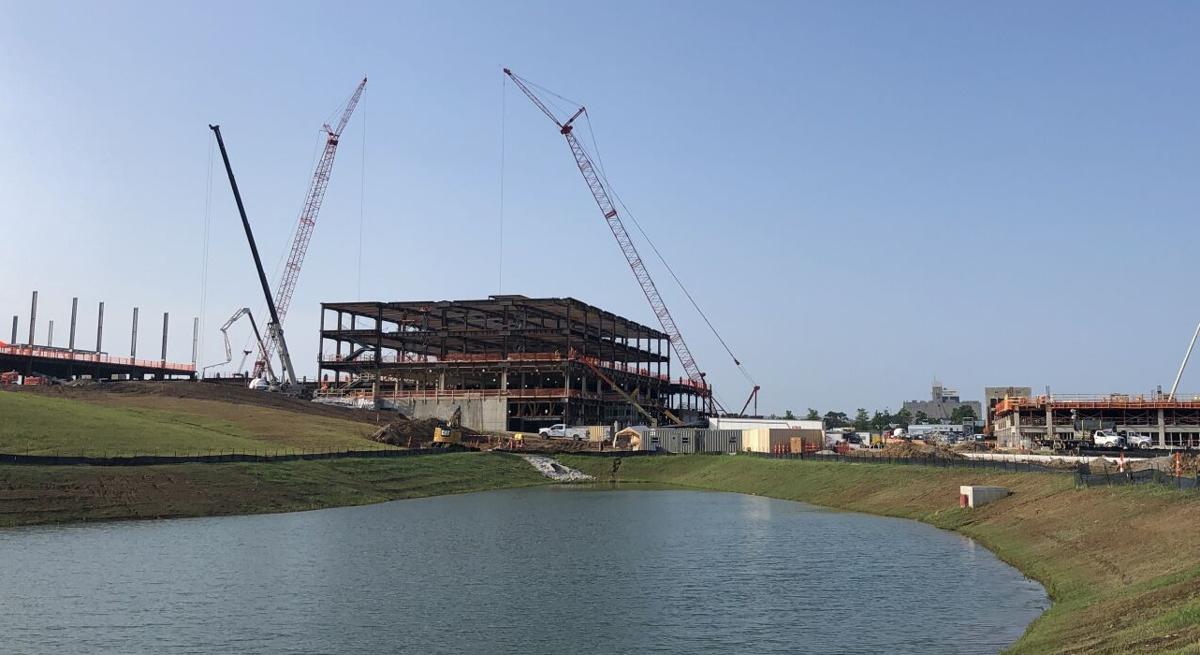 Construction continues at the $1.7 billion St. Louis campus of the National Geospatial-Intelligence Agency informally called Next NGA West. The main contractor said in October 2021 it had not yet met minority business contracting goals but ultimately expects to. 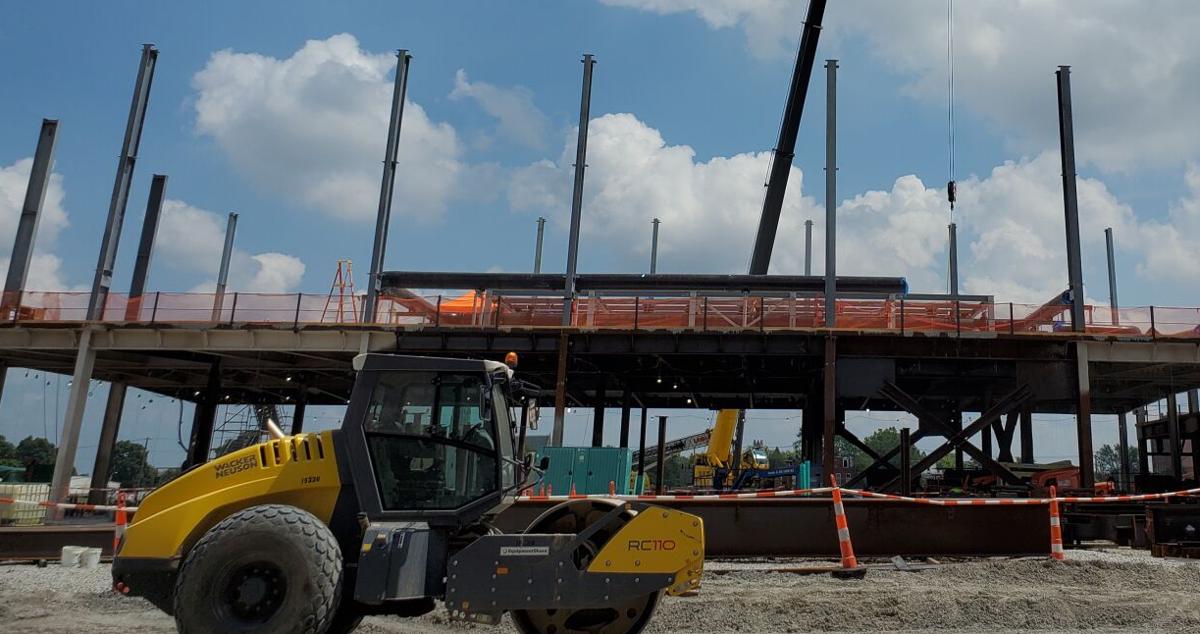 Construction continues at the $1.7 billion St. Louis campus of the National Geospatial-Intelligence Agency informally called Next NGA West. The main contractor said in October 2021 it had not yet met minority business contracting goals but ultimately expects to.

McCarthy Building Companies and HITT Contracting, the joint venture building the $1.7 billion, under-construction campus of the National Geospatial-Intelligence Agency, recently announced the project has surpassed its goal of awarding 28% of all subcontracted dollars to small businesses.

“What that’s saying is: there are opportunities that are wide open for minorities to step up.”  – Jason Bortz, owner of Select GCR.

The news release on the project did not mention two years into the construction project, St. Louis-based McCarthy and Falls Church, Va.-based HITT are about halfway to their voluntary goal of awarding 25% of subcontracting dollars to minority-business enterprises.

At least $151.8 million of a roughly $536-million budget for subcontractors has been awarded to firms that meet the federal standard for small businesses, the companies said. According to the joint venture, contracts to companies owned by racial and ethnic minorities thus far total about $64 million.

The largest federal investment in St. Louis history still has more than two years to go before completion. A spokeswoman for the joint venture said the companies feel they will meet the minority contracting goal by the project’s end.

How much people of color, particularly those near the 97-acre campus and in the broader St. Louis region, will benefit from the project has been a question since the headquarters’ plans were announced in June 2016.

A Florida-based consultant who works with companies seeking government contracts sees the distance to the minority contracting goal line as an opportunity for businesses to step up.

However, Wendell Stemley, director emeritus of The National Association of Minority Contractors, said he’s concerned the gap may never be closed, as he’s seen in other major construction projects.

“It never gets better,” Stemley, referring to past projects he’s tracked, said. “Their assertion is that ‘we're not done yet. It's going to get better later.’ ‘Get better later’ has not worked.”

The Jefferson and Cass avenues campus in the St. Louis Place neighborhood will replace the current NGA facility south of downtown. The campus will include a more than 700,000-square-foot main office building, two parking garages, a visitors center, a delivery inspection facility and a utility plant. The U.S. Army Corps of Engineers’ Kansas City district is responsible for managing the design, construction and delivery of the campus, the release said.

Before the November 2019 groundbreaking for the campus, a joint project of NGA, the Army Corps and the U.S. Air Force, McCarthy HITT hosted an outreach event for small, minority-owned and women-owned businesses interested in working on the project casually called Next NGA West or N2W.

In 2017, Premier Demolition, a local minority union contractor, received a $311,000 demolition contract by St. Louis to help pave the way for the construction project.

Between the January 2020 start of construction and November 2021, the joint venture’s movement toward the minority contracting goal has been slower than the speed at which contracts have been handed out to small businesses, which could have annual revenues of up to $16.5 million and are often owned by white men.

McCarthy HITT said the “larger portion” of the $151 million that went to small businesses was awarded to companies with less than $10 million in revenue.

The $64 million committed to businesses owned by racial or ethnic minorities is out of $536 million, or 12%. The 25% minority contracting goal is laid out in the “project-specific inclusion plan.”

Based on classifications established by the U.S. Small Business Administration, many small, minority-owned firms fall into the subcategory of small, disadvantaged businesses. The federal project goal for such businesses on the NGA job is 5%, according to Heather Cirre, a manager in small business contracting and outreach for McCarthy.

There are “ongoing efforts to maximize the number of minority-owned businesses working on this project over the next couple of years,” she said.

Stemley said the way minority spending is allocated in some contracts, “you might end up with zero African American participation. We’ve heard [promises] before without any results.”

In a statement issued in October, the minority contractors’ association pointed to what it called “the under-representation of Black business” on the Las Vegas Raiders’ Allegiant Stadium, a $1.97 billion project on which McCarthy was part of the design/build team. There was “very little African American participation in the Raiders stadium project,” Stemley said.

A spokesperson for the stadium could not be reached for comment. Stemley is not the only one keeping an eye on minority participation.

McCarthy HITT’s portion of the $1.7 billion NGA project is about $700 million, according to data on usaspending.gov. According to the website, the team will earn at least $672.2 million if the current contract is fulfilled and up to $727.8 million if certain contract options are exercised. Some of the work McCarthy HITT will do itself and is not open to small or minority-owned firms.

Through early November, the largest single “sub-award” listed on usaspending.gov is the $138.98 million awarded in 2019 to Fenton-based Sachs Electric Company for electrical and low voltage systems.  [check]

Of the total subcontracts issued on the project to date, 29% were awarded to minority-owned businesses, according to the spokeswoman. Due to the size of the project, McCarthy HITT has been focused on “making sure subcontract size is evaluated carefully so that trade partners take on scope appropriately matched to their capacity,” McCarthy’s Cirre said.

In the meantime, more contracts will be handed out, even though the majority of work in the main project contract has been awarded, according to the release. Prime subcontractors are “continuing to engage small, minority-owned, and women-owned businesses as next-tier subcontractors,” the release said.

Cirre said the joint venture expects to hit the minority contracting goal by the end of the project, adding, “McCarthy HITT continues to seek ways to support minority-owned businesses and help them build their work capacity during this busy St. Louis construction market.”

Jason Bortz, owner of Select GCR, a Tampa-area consulting firm, said the revelation about the contracting status should serve as a clarion call to minority-owned firms.

“What that’s saying is: there are opportunities that are wide open for minorities to step up,” Bortz, whose firm helps businesses get the necessary certification to bid on government jobs, said. “Make sure that they're certified and go out there and start bidding on these jobs. They probably have a tremendous chance and an opportunity to make a ton of money and be involved in something big. To me, the flags are waving: ‘hey minorities, there's a ton of opportunities here.’”

He said by acknowledging the minority contracting goal has not been met, McCarthy HITT is “scrambling, pretty much yelling from the mountaintop: ‘Come on minorities, submit some bids.’”

According to the news release, the team has reached out through various databases and sources to nearly 5,000 small, minority, women-owned and veteran-owned businesses.

At least 18% of the workers on the construction project are people of color, which exceeds the federal requirement of 14.7% minority workers, the joint venture said in the release. Female trade workers make up about 5.7% of Next NGA West’s construction workforce.

“McCarthy HITT has worked diligently to achieve these numbers considering labor shortages affecting the entire construction industry that have made hiring a national challenge, particularly for women,” Cirre said in a statement.