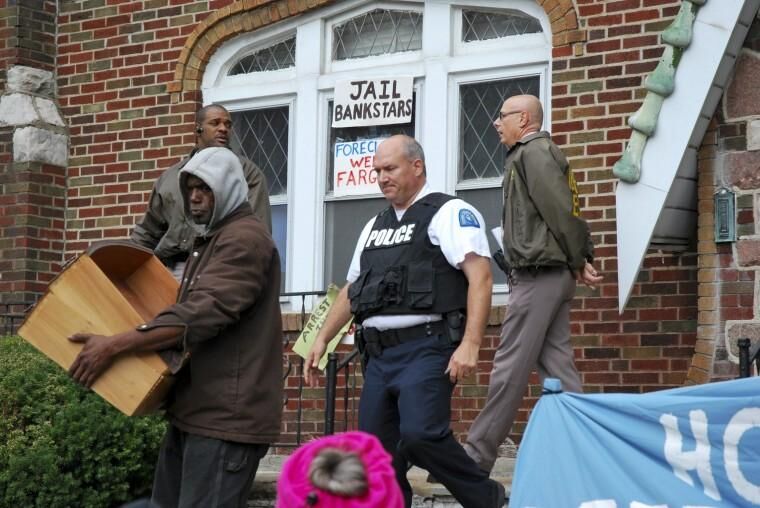 A homeowner was evicted from their home of 20 years on Penrose Street in North City by Sheriff's deputies and police in this file photo from October 2012. Since March, 1,154 eviction cases have been filed in the City of St. Louis, according to the Eviction Lab at Princeton University. When the moratorium on evictions lifts, many of these cases will result in evictions. 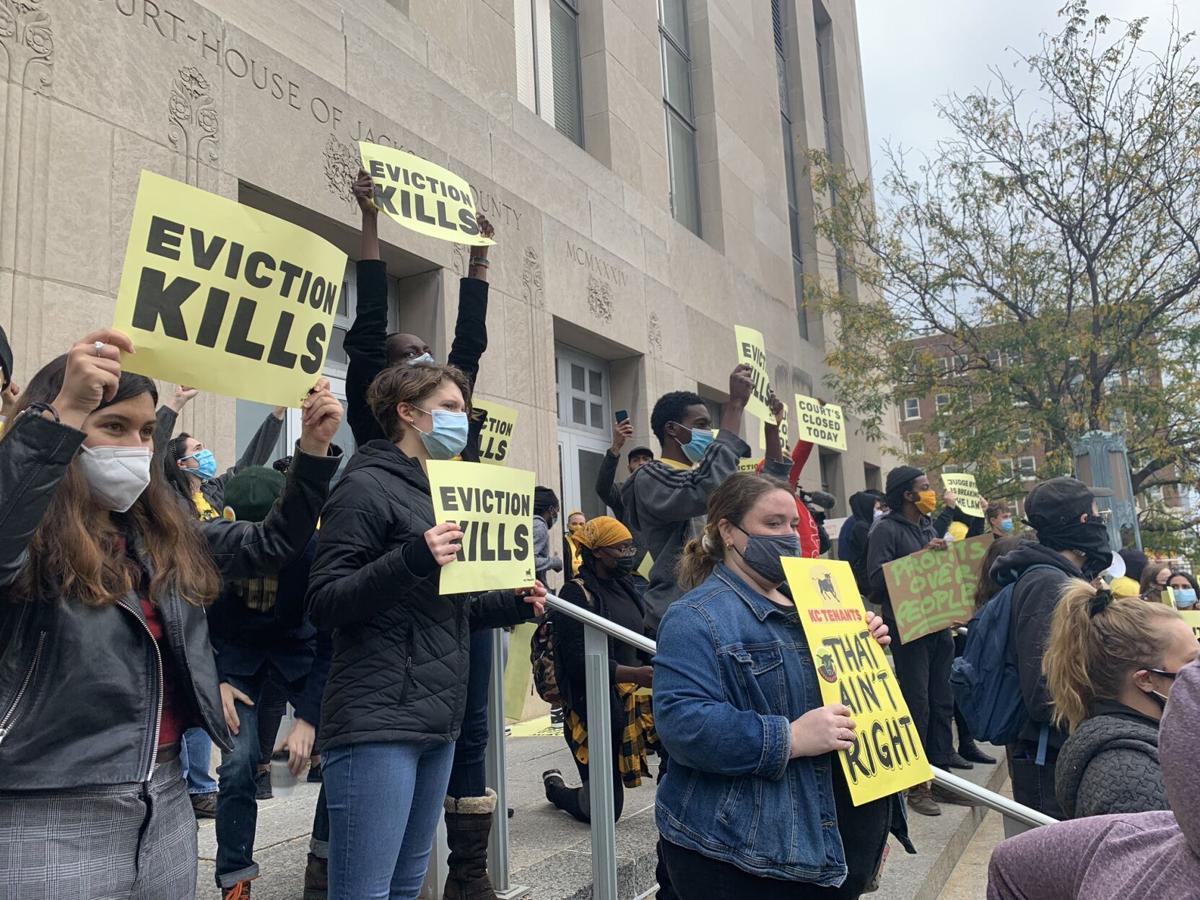 The group KC Tenants leads a protest against evictions on Oct. 15, outside of the 16th Circuit Court of Jackson County in Kansas City

Phone calls from families on the verge of losing their homes have jumped 300 percent at Catholic Charities of Southern Missouri.

“And we’re getting more and more phone calls every day across the whole southern Missouri in our offices — not just Springfield, but it’s Poplar Bluff, over in Cape Girardeau and in Joplin,” said John Lunardini, senior vice president for operations for the agency.

Families are not able to pay their rent, mortgage or utility bills, he said. In every story he hears, there’s a strong sense of uncertainty and fear. Some people said they aren’t getting the work hours they had been before the pandemic. Others had to change jobs because businesses closed down.

In the meantime, they had to leave their apartment and need help getting into a new place, he said.

Like housing agency directors throughout the state, Lunardini fears what will happen when the federal moratoriums on evictions expire December 31, including the Centers for Disease Control and Prevention (CDC) moratorium and Federal Housing Administration (FHA) moratorium on foreclosure and eviction.

“At that point, we think that the need is just going to even jump trifold,” he said. “And the last thing you want is anyone to be evicted in the winter months. No family should be out in the cold in the winter, here in Missouri.”

While Lunardini fields calls for help, the money set aside to prevent homelessness is sitting in the state treasury.

The Missouri Housing Development Commission will decide in November how to distribute CARES Act funding for homeless prevention approved by Congress in March through the Emergency Solutions Grant Program (ESG).

That is in addition to $4.1 million from regular funding in the grant program also part of this year’s state budget.

The housing commission hasn’t been able to deliver the money because it didn’t get guidance from HUD on its use until September 1, said spokesman Brian Vollenweider.

The delays are frustrating, said state Rep. Kip Kendrick of Columbia, the ranking Democrat on the House Budget Committee.

“Are the feds slowing down any decision made at the state level, or is this MHDC dragging their feet on getting the money out the door?” Kendrick said. “Clearly it has been needed for a while, and the not-for-profit agencies need time to prepare for what will be an increase in evictions and homelessness around the state.”

“There’s a backlog piling up right now, and those folks are in danger of eviction as soon as the protections lift.” – Glenn Burleigh, Metropolitan St. Louis Equal Housing and Opportunity Council

The program is designed to provide emergency assistance to persons who are currently homeless, very low-income persons at imminent risk of homelessness, and persons fleeing domestic violence.

“We are currently working on an allocation plan for these funds,” Vollenweider said.

Catholic Charities is one of the many agencies that receives ESG funds every year to provide housing and utility assistance, but that money has almost run out, Lunardini said. Catholic Charities has not received any of the ESG funding from the CARES Act, he said.

“When the legislature comes together for the special session and allocates those out to agencies, especially like ours, it’s going to go a long way to help those as we all struggle through this new normal of COVID,” Lunardini said.

In St. Louis County, sheriffs have 250 eviction judgements backlogged. So, when the moratoriums are lifted, the sheriffs will be forced to serve these evictions.

The CDC moratorium and some circuit court orders, including those issued in St. Louis City and St. Louis County, are preventing people from physically being removed from their homes due to the pandemic. However, they do not prevent landlords from filing for evictions in court or stop a judge from granting an eviction order. Those eviction orders will sit on the local sheriff’s desk until the moratorium expires.

“There’s a backlog that is essentially piling up right now,” said Glenn Burleigh, community engagement specialist for the Metropolitan St. Louis Equal Housing and Opportunity Council. “And those folks are in danger of eviction as soon as the protections lift.”

In St. Louis County, for example, the sheriffs have 250 eviction judgements backlogged, according to a spokeswoman from the 21st Circuit Court. So, when the moratoriums are lifted, the sheriffs will be forced to serve these evictions and remove individuals from their homes.

Since March, about 2,700 eviction cases have been filed in St. Louis — 1,542 in St. Louis County and 1,154 in the City of St. Louis, according to the Eviction Lab at Princeton University. In the Kansas City area, there have been 2,027 filings since March 15.

And even since the CDC moratorium was put in place on September 4, more than 90 evictions have been filed in Boone County, 340 in Greene County and 470 in Jackson County.

Evictions will also disproportionately harm communities of color— and particularly Black women. From 2012 until 2016, Black women renters in Missouri, on average, had evictions filed against them at more than double the rate of white renters, according to the ACLU of Missouri.

“There could really be a tsunami of evictions, when the moratorium ends,” said Jeanette Mott Oxford, director of policy and organizing for Empower Missouri.

Both the tenants and landlords will benefit from rental and mortgage assistance.

“And if the landlords go under because they can’t meet their bills, it has a ripple effect that deepens the economic downturn for our whole state,” she said.

Missouri is one of only seven states that never issued a statewide moratorium on evictions, according to the Evictions Lab. And the CDC moratorium does not automatically prevent evictions. Tenants have to present a declaration form that says they have been affected by the pandemic.

The housing council has distributed about 2,500 flyers about the CDC moratorium requirements throughout the St. Louis area, explaining that people aren’t automatically protected.

“Educating folks around that has been somewhat difficult because in the news, it can sound like it’s a big thing, and everything stopped,” Burleigh said. “And that’s not really what happened. Really, these court cases are still rolling. And tenants have to use this affidavit to invoke it.”

That’s why housing advocates are urging Parson and legislators to pass a comprehensive eviction ban statewide during the special session.

“Certainly, there’s a lot of ways that people are kind of getting around the eviction ban, or making it really difficult for tenants to prove that they’ve been affected or to prove that they’re in need,” said Sarah Owsley, policy and organizing manager for Empower Missouri.

People can also be evicted for not paying their utility bills, so a shut-off ban is also necessary, she said. The ESG funds are the correct path to provide necessary assistance, she added.

However, advocates argue that Parson needs to go one step further. In August, Empower Missouri, EHOC and dozens of other agencies and housing experts signed a letter urging the governor to make funding available to property owners if they cancel rent payments and arrears, do not pursue formal or informal evictions, and adhere to a set of strict conditions for the protection of Missouri tenants and their families related to receipt of public funding.

The governor has resisted those calls, telling reporters “we’re not going to do an order for the entire state to allow people not to pay your rent.”

“There’s a process in place for that, and that system needs to work,” Parson said at the time.

However, another problem is that a very small percentage of people facing evictions have legal representation, and they’re forced to try and represent themselves on a video call or by phone. Several states have allocated funding for tenant representation because they’ve found it decreases the number of eviction judgements.

“It’s vitally important that we keep people stable and housed during this pandemic, especially since we’ve been told right, there’s no real treatment,” Owsley said. “The solution to this is to stay home. That’s the medicine, right? Stay home and stay out of the community.”

“It’s much more expensive to get people rehoused after they’ve lost everything then it is just to keep them where they are,” said Yusef Scoggin, who oversees St. Louis County’s homeless services. “So that’s where we want to target the bulk of our resources.”

St. Louis County received a total of $4.8 million in ESG CARES Act funds directly from the federal government. Normally, they receive about $500,000 in ESG funds.

“That’s recognition of the magnitude of the problem,” he said.

The state’s allocation of ESG funds will not go to places like St. Louis County, but will go directly to the agencies doing the work through the state housing commission.

Whatever happens in Missouri’s special session will likely be a drop in the bucket of the need, advocates said.

“What was in the CARES Act, that wasn’t enough,” Burleigh said. “And as this drags on, even people who qualified for assistance are going to max out if they haven’t already maxed out, and then they’re going to fall behind.”

A September U.S. Census household survey found that 13% of Missourians owed at least one rent payment, and that it was higher, much higher among Black and Latino households.

“We need a robust package of aid,” she said. “A lot of Missourians are hurting and over 40 percent have lost income since March. So, we’re in a mess.”

Rebecca Rivas is a reporter for The Missouri Independent:missouriindependent.com. The Independent’s Rudi Keller contributed to this story.

These Pandemic moratoriums have really gotten out of hand. In Missouri a tenant group actually sued a Circuit court judge, saying landlords (or any citizen providing housing) who had people living off them for free had no right to court access at all.

No, the Fifth Amendment of the Constitution guarantees every U.S. citizen the right to due process and that means a judge and their day in court, and thank god this was upheld.

Small landlords have been bankrupted by these orders, and it was unfair to force them to bear the brunt of COVID nonworkers without any assistance. As well as to deny them access to the courts. Let tenants who refuse to pay the rent they agreed when they got the apartments fairly prove in court they can't pay rent.

The Orwellian edicts need to end.