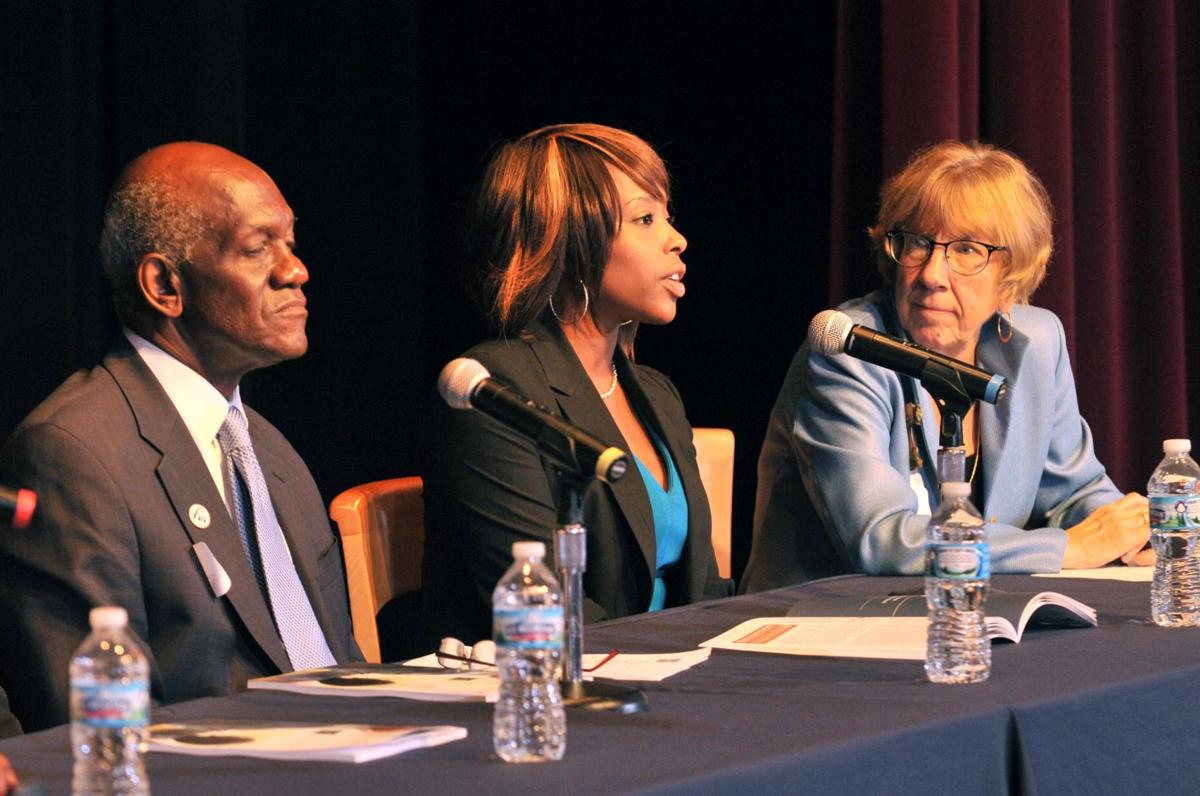 Ronald Jackson and Sue Stepleton listened as Roosevelt High School Principal Crystal Gale discussed identifying behaviors that may be the root of why a student lacks attention in the classroom during a community forum convened by "For the Sake of All" researchers recently at the Missouri History Museum. 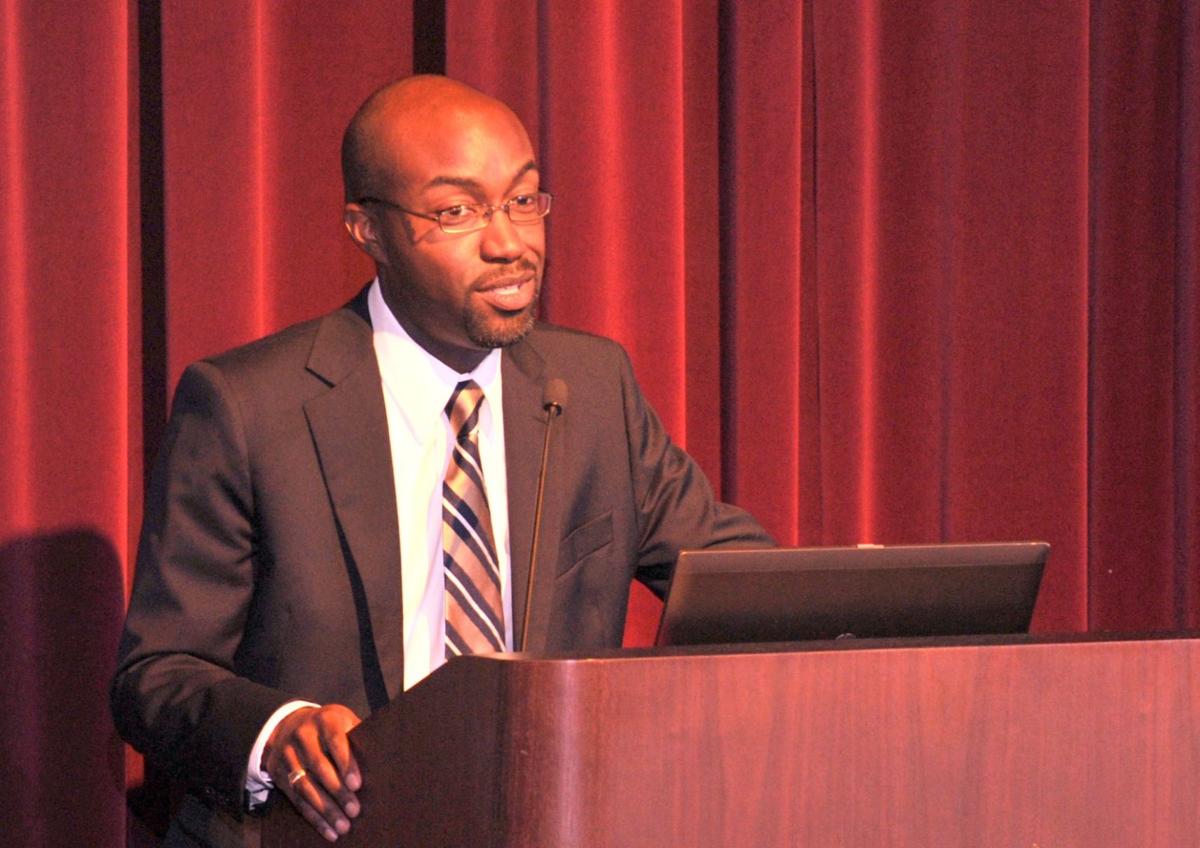 Ronald Jackson and Sue Stepleton listened as Roosevelt High School Principal Crystal Gale discussed identifying behaviors that may be the root of why a student lacks attention in the classroom during a community forum convened by "For the Sake of All" researchers recently at the Missouri History Museum.

Creating economic opportunities was the focus of a recent public brainstorming session for organizers of For the Sake of All, a report released earlier this year that highlights health disparities in St. Louis city and county.

Lead researcher Jason Q. Purnell of the Brown School at Washington University put together a panel of leaders who described their community-minded approaches to develop economic opportunity for young people in St. Louis.

Rebecca Bennett, founder and principal of Emerging Wisdom LLC and the InPower Institute, facilitated the discussion. She asked panelists what excited them in the area of workforce development, financial services and creating economic opportunities for low- to moderate-income families in the St. Louis area.

Tishaura Jones, St. Louis Treasurer, has been working to establish an Office of Financial Empowerment and has brought forth new programs and resources related to financial literacy.

“We are opening an Empowerment Center in City Hall in the Treasurer’s Office, because we realize people visit City Hall for a myriad of reasons and 90 percent of them are not pleasant, so we want to change that trajectory and give people a reason to come down to City Hall for something good.”

“What they do is similar to what we’ll be doing,” Jones said. “They give each kindergartener in a public school a $50 deposit-only account and if you’re eligible for free-and-reduced lunch, you get an extra $50. I don’t know if we have the money to do that, but, we are going to give every kindergartner in a public or charter school $50 on an account at a local credit union.”

Additionally, Jones said the Wells Fargo’s Hands on Banking program will provide financial education and the office will raise funds for incentives for kids who are making positive strides in school.

“We are doing this because I personally think it’s the government’s responsibility to eradicate poverty,” she said.

Michael Sherraden, the director of Washington University’s Center for Social Development, said he was excited about the efforts of the City Treasurer. Washington University has been studying a similar project, SEED for Oklahoma Kids, which gave 1,346 children a $1,000 college savings account at birth.

“All of the curriculum and the math computations were contextualized to the health discipline, so you might be doing dosage calculations and things like that,” Nunn said. “It’s kind of tweaking your interests in terms of what you want to be in terms of your career goals.”

Edward Bryant, president of the St. Louis Minority Business Council, said there are opportunities to look forward rather than back in regional entrepreneurship.

“I am looking at ways to make that entrepreneurial ecosystem more economically inclusive so that we don’t just become another bunch of hip young white guys,” Bryant said.  “That ecosystem needs to look more like the entire region.”

Attendees became participants when asked to list on one notecard related activities from their communities that are creating economic opportunities.

The most animated discussions came from responses listed on the second notecard – what attendees thought was missing from the equation. They came back with financial education beginning early in life, guidance in career paths, parenting skills training, key influencers and persons most affected by economic and health disparities.

She said also missing are people outraged at having 92 municipalities in St. Louis County. “That is the most ridiculous, ineffective way to govern, and how are we going to get them together and realize it?” Kalish said.

Race and its role in persistent economic disparities never came up, until attorney Eric E. Vickers called it out for the audience to consider.

Vickers asked Purnell, a social psychologist, why can’t this community just have a frank discussion about race.

“Race discrimination – that’s what Ferguson is all about – that’s what these young people are talking about,” Vickers said. “They are being treated differently, and they are not the only ones saying it. Every black person in this city is saying it right now.”

The forum was made possible by the Missouri Foundation for Health, Focus St. Louis and Washington University St. Louis.

In early 2015, the For the Sake of All project will take an in-depth look at early childhood development in the St. Louis area.

For more information about the report, forum or related activities, visit forthesakeofall.org.

For the Sake of All

Sisters, we are here to help you change the world

Talk to us – we’re listening

Who of you by worrying?