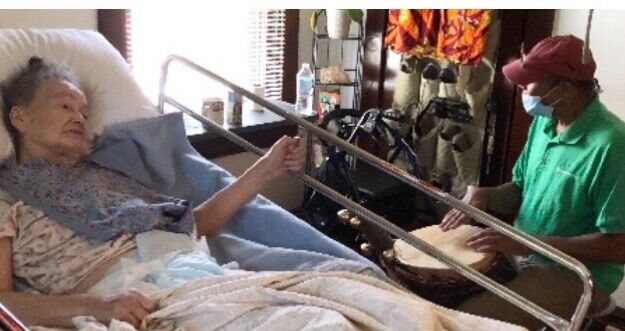 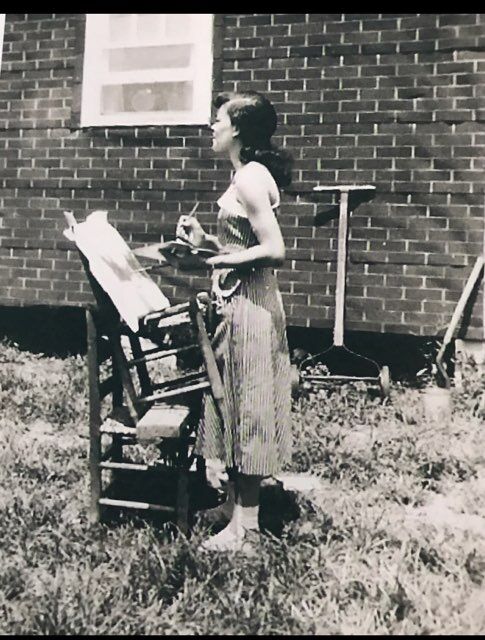 To “transition,” in western society, means someone has died and moved on to the great beyond. The African tradition of “transitioning,” however, is a lengthier process. Since death is perceived as the beginning of a person's deeper relationship with creation, much attention is given to complementing life before a person dies.

This was a challenge for local musician, artist, and educator Mike Nelson, affectionally known as “Baba Mike.” Nelson’s mother, Pauline, 91, suffers from late stage Alzheimer’s and other life-threatening maladies.

Pauline was an accomplished artist and photographer. Nelson’s father Edward, who passed in 2010, was an environmental engineer. His parents introduced him to African culture and tradition as a child in their home in the Greater Ville Neighborhood. The neighborhood was once the center of St. Louis black culture. It was the home of notables such as Chuck Berry, Arthur Ashe, Dick Gregory, and Josephine Baker. As a youngster, Nelson studied jazz trumpet and arranging under artists Oliver Lake, David Hines and Lester Bowie.

In March, as the Coronavirus was spreading throughout the United States, Nelson and his siblings concluded that their mother, who had a stroke while living with his sister, needed to be in a nursing home. The process, he said, was a nightmare.

“This country has made a total mess out of hospitalization care for the elderly,” Nelson said. “I had to keep one ear to the news and one ear to what they (nursing home officials) were saying. All of it, from the White House, the health department…they all seemed to making it up as they were going along.”

Nelson’s frustrations intensified as he visited facilities for his mom. Individuals between 85 or older are among those with the greatest risk of severe COVID-related deaths. None of the facilities, Nelson said, would reveal if residents had or had not died from the virus. He was searching around the time when nearly 32,000 residents and almost 700 employees of federally licensed nursing homes nationwide had died from the virus.

Nelson’s final decision was made after the family was told they could place Pauline in a home but, due to mandated health restrictions, they could not visit her.

“That’s not the way she should go,” Nelson said. “Respecting (African) tradition, it’s important how an individual spends their final weeks, months or years. Would she have music, could she look out a window? All this is important before she crosses over and becomes an ancestor.”

Nelson decided his mother was going back to her house in the Ville. Since she had been battling illnesses for four years, the house needed serious repair and updating for his bedridden mother. Trees had to be cut down, mounds of trash and unneeded furniture was hauled away. The only upside of the restoration process was retrieving a treasure trove of his mother’s paintings and photographs, Nelson admitted.

After weeks of grueling work, Nelson and a neighborhood handyman had the one-bedroom house ready. His mother’s “hospice bed” was situated in a freshly painted room. A picture of her late husband hangs on the wall along with some of Pauline’s paintings and photographs. Nelson even planted colorful, flowers outside her bedroom window.

Nelson was determined to make music a part of Pauline’s transitional process. He has studied Djembe and West African music from master drummers from Senegal and Guinea and Trinidad. Nelson, who travels the country as a performer and lecturer has performed with the St. Louis Symphony, China National Orchestra as well performed with a list of well-known recording artists.

Pauline’s family was active in Nashville’s civil rights movement in the 1960s. Her sister, Bernice Johnson Reagon, is a composer, scholar, social activist and founder of the all-black female a cappella ensemble, Sweet Honey in the Rock.

The family arranged for Pauline to have a 24-hour caregiver at home.  As soon as she was moved in, Nelson initiated his music sessions, playing familiar songs for his mom.

“I’d play drums and sing her favorite songs; freedom songs, protest songs like ‘We shall Overcome.’ My mother gets peace from those drums.”

Alzheimer’s had taken its toll on his mom. She recognizes him, Nelson said, but communication is limited.

“In the beginning, her responses were ‘yes, no,’ short and to-the-point,” Nelson said. “Other than that, all she did was moan and cry.”

Then one day, shortly after he started his music therapy, Pauline, responding to his drums, reached out, held his hand, and said, “that’s nice.”  A few days later, she asked Nelson, “raise me up.” Now, family members and the caregiver can take her out of bed for short stints to sit on the front porch to look at her flowers.

“Some people say it’s just a coincidence, but I don’t believe that,” Nelson argued. “She’s doing so much better now and it’s because of the drums, they have healing vibrations.”

Nelson’s theory is not far-fetched. Music is known to have stimulating effects on the brain, the body, and human emotions. Medical institutions such as Scripps Mercy Hospital San Diego, New York-Presbyterian Allen Hospital and UChicago Medicine, a not-for-profit academic medical health system in Chicago are all using music as a soothing treatment for COVID patients.

Medical research had nothing to do with Nelson’s method of helping his ailing mother. His actions were motivated by African traditions, a gift Pauline and Edward gave him as a child. Nelson said he is acting in the spirit of that tradition:

“My mom gave me the gift of life. She brought me into this world. I’m not going to miss the opportunity to return that favor.”