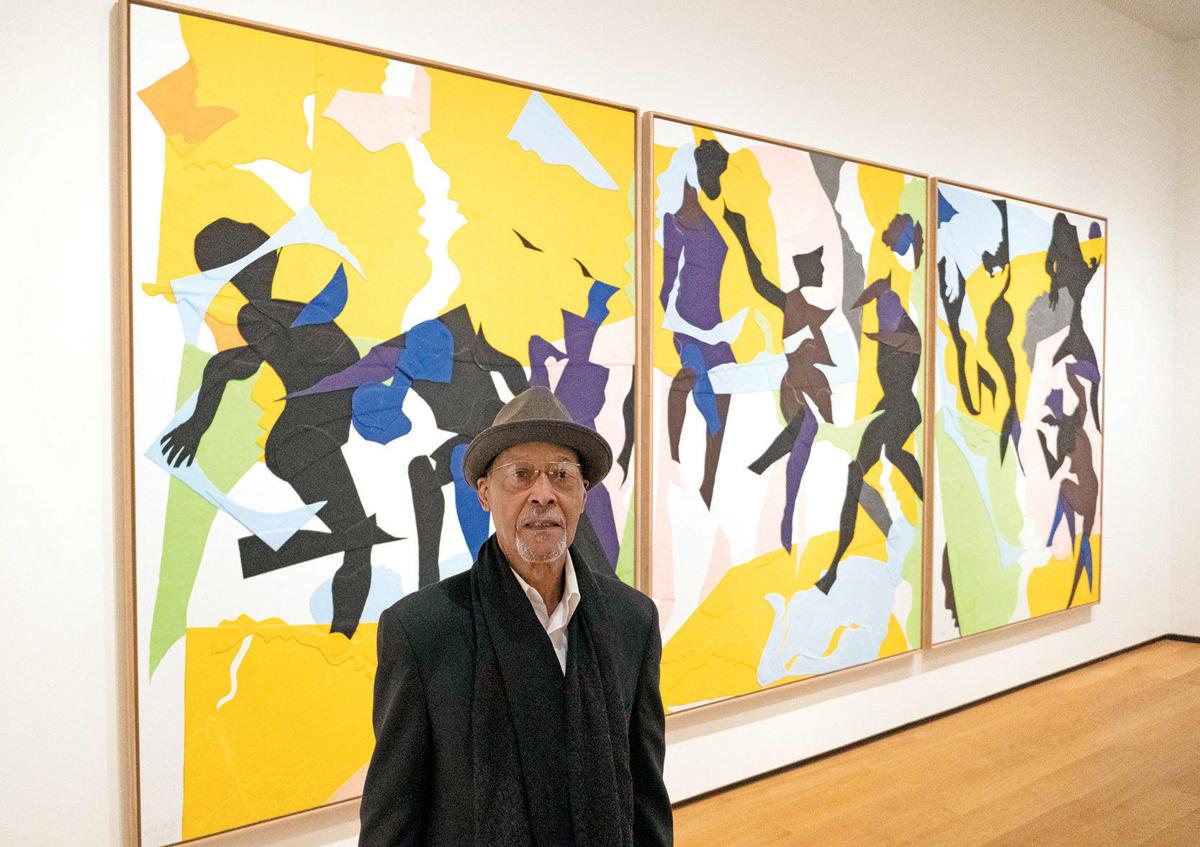 St. Louis native Oliver Lee Jackson stands in front of one of his multi-paneled works currently on display at the National Gallery of Art in Washington, D.C. 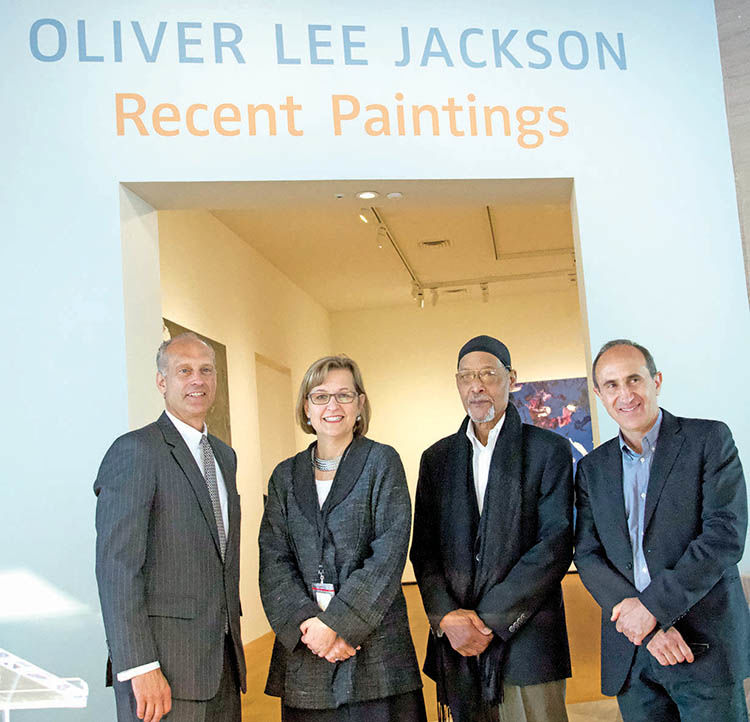 “This is the show. I hope you like it. That’s about all that I have to say,” St. Louis native Oliver Lee Jackson told the crowd in April during the press conference for the opening of “Oliver Lee Jackson: Recent Paintings” at the National Gallery of Art in Washington, D.C.

He thanked the crowd and stepped away from the podium. That was it.

According to National Gallery senior curator and director of Modern Art, Harry Cooper, it was typical Jackson. Cooper pointed out just before the artist offered his 20 or so words to introduce the most nationally prominent exhibition of his career, Jackson wants the work to do the talking.

“It really doesn’t matter – as you have told me – who is making the art or who is looking at the art,” Cooper said. “It’s about the art itself. And this art is here because it deserves to be here. It’s about quality and value. That’s what the National Gallery is about.”

“We are honored to have Oliver and his dynamic paintings join our tradition of presenting the work of leading contemporary artists here in the East Building,” said Kaywin Feldman, director of The National Gallery of Art. “Over the course of his long career, Oliver Lee Jackson has evaded definition. He continuously experiments with new mediums, styles and materials. His work is abstract, but also rooted in the human figure. It’s evocative, but not necessarily representational.”

When he does speak about it, Jackson doesn’t talk about his work like many artists would– carrying on about where the inspiration was drawn from, what it means and the idea he hopes the work expresses.

“I’ve made works that I didn’t know if I liked them. – or I didn’t like them – but I knew they were correct,” Jackson said. “What makes it right? Well, what was the intention? If I stand before a work and I’m going to take that time – my time – to be still, it better be worth it.”

His intention is “to activate.”

“I’m not ever interested in stories. They have a beginning, middle and end,” Jackson said in a film created by the Gallery in his Oakland studio aptly titled, “There Is No Story.” “I’m interested in the images relating to one another in such a way that they call up and create tension. The tension between them activates the viewer.”

Ideally the implications of that activation are wide open for interpretation.

“There is no story. There is no storyline to follow. There are a series of effects and they should add up to opening up the viewer to a world that has a clear feeling,” Jackson said. “Let the painting lead you. Let it do, standing before you, what it does. Most people want to interpret it before they let it do to them what it does.”

Being activated by Jackson’s work is a feeling that Cooper has known for more than two decades. While working as curator of Modern Art, Cooper presented Jackson at the Harvard Art Museums when he organized “Duo: Oliver Jackson/Marty Ehrlich.”

It featured a series of paintings by Jackson and a music soundtrack composed by Ehrlich. The exhibition was dedicated to their friend and collaborator, World Saxophone Quartet co-founder, saxophonist and composer Julius Hemphill. “Duo” was inspired by Ehrlich, Hemphill and Jackson’s experiences in St. Louis (Ehrlich and Jackson are St. Louis natives).

Jackson, a graduate of Vashon High School, spent several years as an artist, arts collaborator, arts educator and community activist in his hometown before leaving, finally locating to the Bay Area in the early 1970s.

“If we were in Japan, Oliver Lee Jackson would be what they call a living national treasure,” Cooper said. “And that really involves mastery of techniques, of genres and of traditional methods. He has done that not just in painting – which is the focus of this show – but sculpture, printmaking of all kinds, drawings and collaborations of artists in many other mediums.”

According to Cooper, Jackson is also a master of invention.

“You will see in so many of these paintings, things that nobody has really done before,” Cooper said. “Things that he has invented over years or in a moment – there is a lot of improvisation and a lot of inspiration inside the exhibition.”

“Oliver Jackson paintings at [the] National Gallery,” famed contemporary artist Glenn Ligon said via Instagram to caption a handful of paintings from the exhibition, “Born in 1935 and kicking [expletive] ever since. Some of you all must have known about this, but I’m being schooled. Congrats to curator Harry Cooper for enlightening me.”

The reward for Jackson would be if Ligon is schooled and enlightened by the art and not him. He’s pleased that he never reached the point of artistic vanity – which can present challenges to the creative process.

“Either I’m a devotee to the work, or I want the work to make people know me,” Jackson said. “That’s not what I want. I want the art to be able to do what it does – to stand apart from me.

It doesn’t need me to present itself. It’s whole. It ain’t me.”

There is a major Jackson painting, Alchemy (1977), currently installed in the Contemporary art galleries at the St. Louis Art Museum.

What part of death don’t you understand?