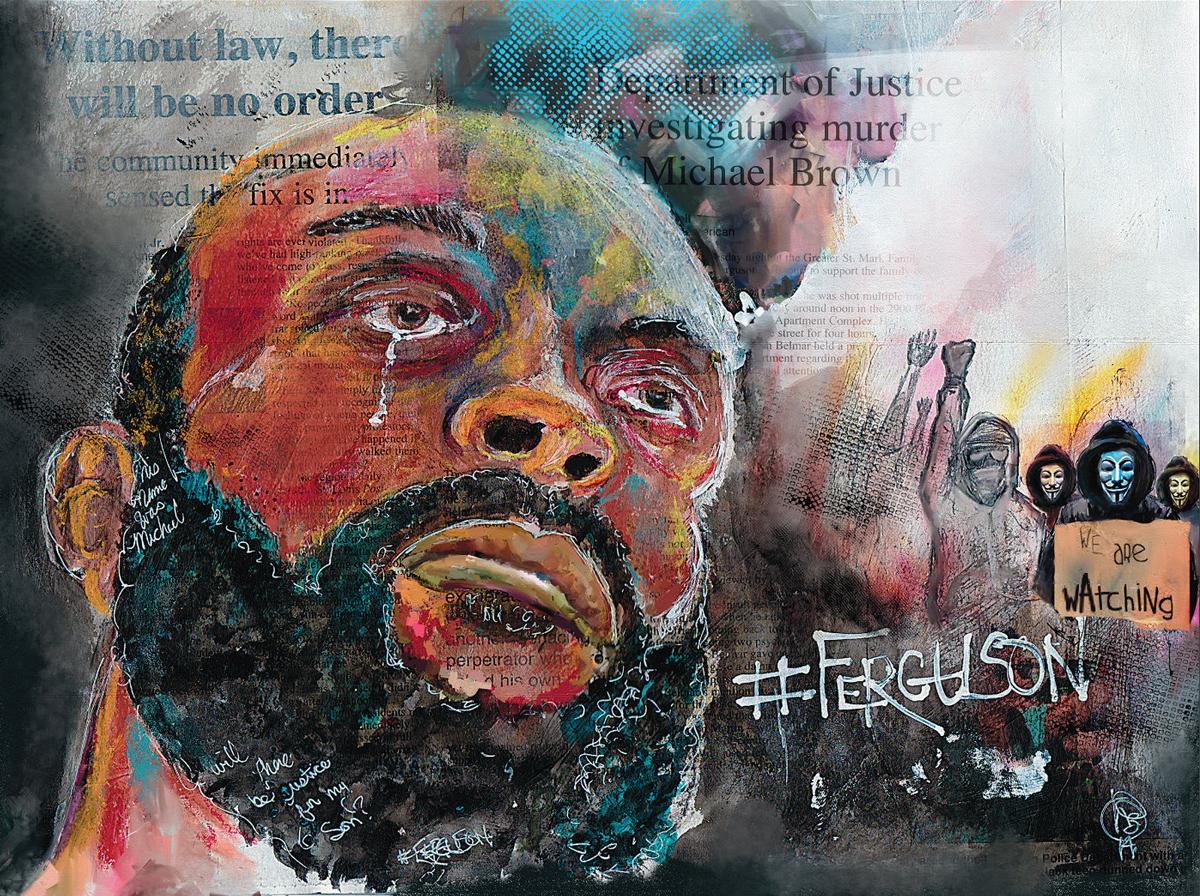 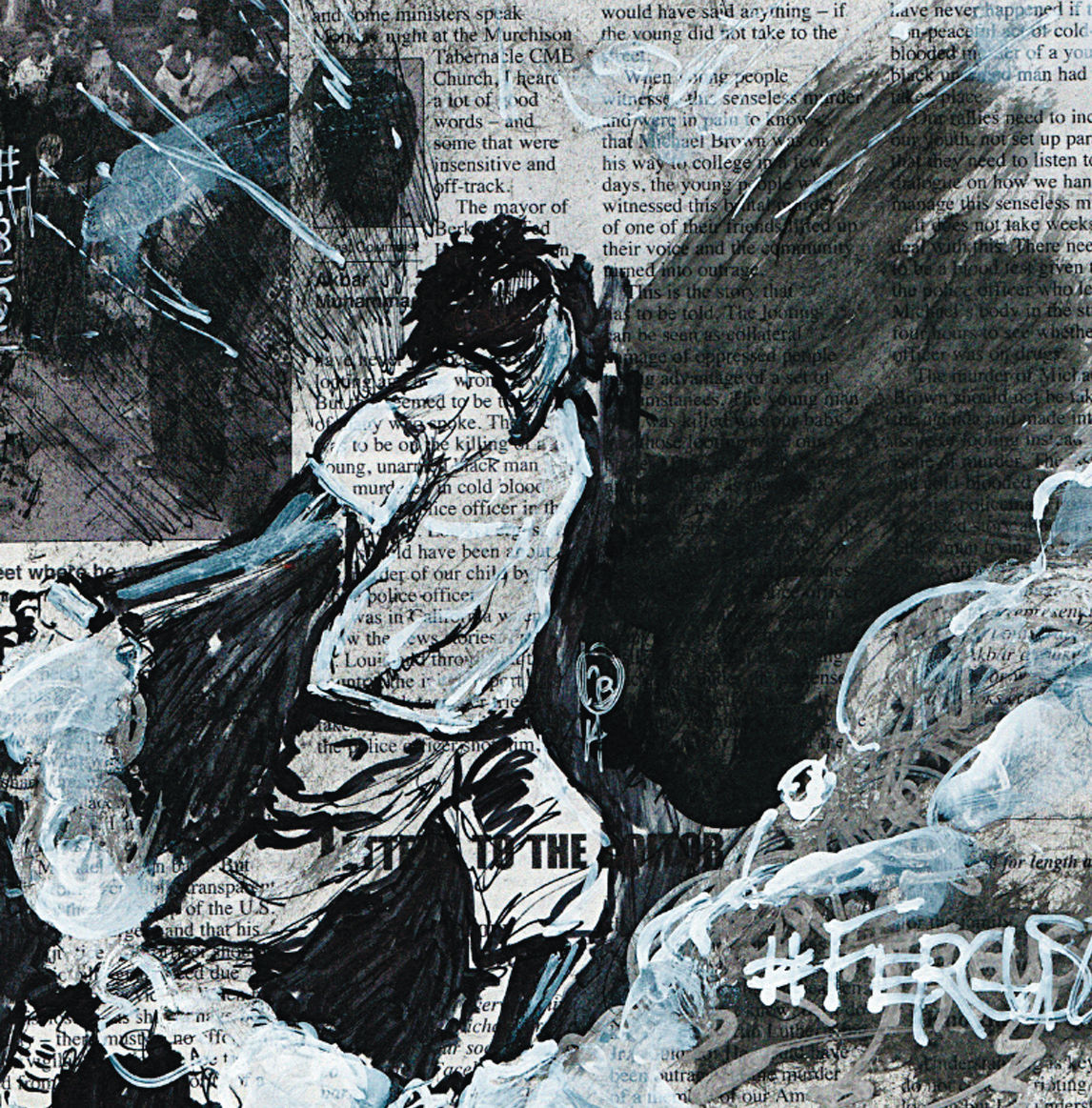 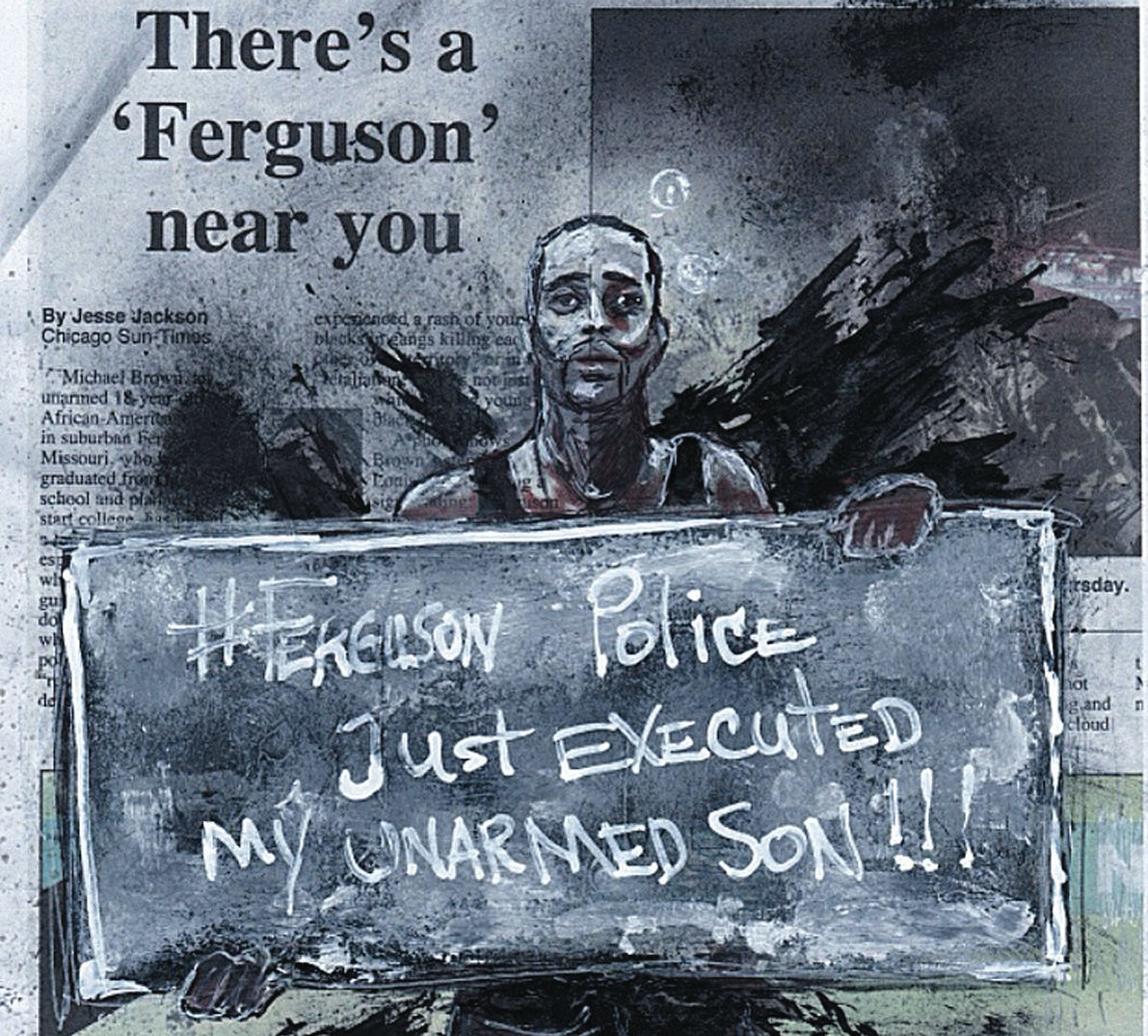 “Using The St. Louis American, let me take what I had going on in my head and how I’m dealing with this situation – and what I want to say about it through my art – and lent credibility to my voice,” said creative artist and graphic designer Howard Barry.

Since the August 14 edition of The American hit newsstands across the city and county, Barry has been using the pages related to the Michael Brown tragedy as his personal canvas.

That Thursday’s paper was a front-to-back commemoration of the thoughts, feelings and perspectives that emerged in response to Brown’s death and the subsequent community outrage that would ultimately capture the world’s attention.

“I needed something to lock it in for me – kind of like they do with hostages where they make them take a picture with that newspaper to stamp the time and the date,” Barry said. “I wanted that for me. I didn’t want it to be another one of those things where we get mad and then we move on.”

Barry has created more than 50 pieces of art with pages from The American as his backdrop.

“For me it was kind of like therapy,” Barry said. “I had to find some kind of way of dealing with what was going on, but not just being another angry voice.”

The killing of unarmed teen Michael Brown on August 9 at the hands of Ferguson Police Officer Darren Wilson hit especially close to home for Barry as a resident of neighboring Northwoods.

A working visual artist and designer, Barry is currently pursuing his undergraduate degree at University of Missouri – St. Louis. He returned to his childhood passion of art after a traumatic brain injury forced him to leave the military after 10 years and return to his hometown.

“I would find myself trying to go on with my everyday life, but I’m going down West Florissant and the roads are blocked and I’m seeing everybody’s reaction,” Barry said. “I would come home and try to work and be so frustrated that it was coming out in other things that I was doing. I had pieces I was working on, and every facial expression was angry.”

While carrying on with his usual Thursday ritual of picking up the paper, Barry stumbled upon a creative outlet to channel his rage.

He made the pages of the paper cry with images that captured Michael Brown’s parents reacting to the teen’s death. Antonio French, who had been on the frontlines of Ferguson, was depicted with a face twisted and tired from the daily frustrations of peaceful protests marred by an overly aggressive police force.

“Going through the paper and some of the images that I had in mind, the headlines and the articles seemed to be a perfect fit,” Barry said. “I had to go get more copies of the papers, because once I started with them, they just kept coming.”

A native of neighboring Kinloch who was once a young black male teen targeted by police, the connection with the Michael Brown tragedy was more than a geographical one for Barry.

“I grew up knowing that there were people who for arbitrary reasons put a bull’s eye on me,” Barry said. “My dad wouldn’t let me go into Ferguson or Berkeley or the surrounding areas for that reason. He was constantly coaching me on what to say when I encountered those officers and made me aware that my life was on the line.”

Barry wants to have an exhibition in the near future to showcase the work and – strictly due to demand – is selling reprints of select pieces. He said he will donate a portion of proceeds to organizations that are helping bring healing to Ferguson.

“In the future when people talk about this, I want to show people it wasn’t just a story that you read about in books,” Barry said. “These were people with years of emotional hurt, things that they’ve been choking down for years, and they finally said, ‘Enough is enough.’”

Everything you need to know about the CARES Act Rebate