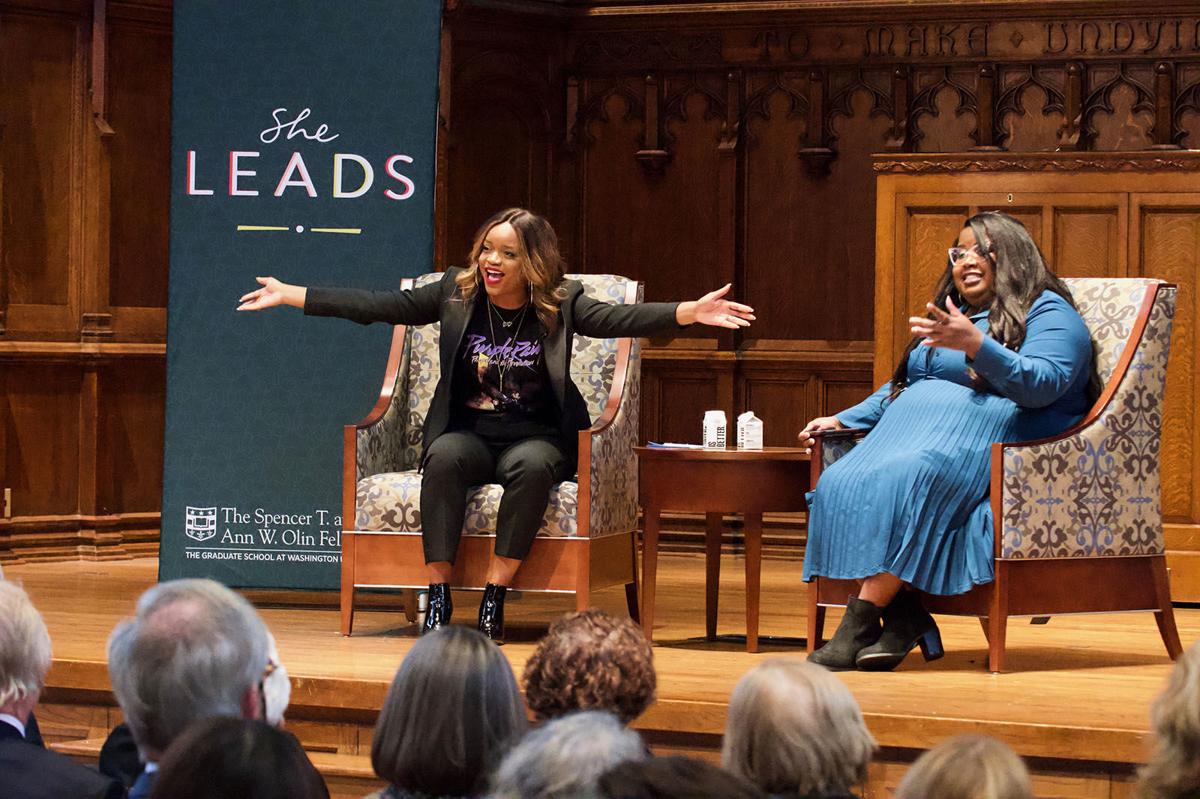 Brittany Packnett Cunningham and Kayla Reed spoke during the opening talk for She Leads, a women’s leadership conference presented by the Spencer T. and Ann W. Olin Foundation and Washington University, Thursday, October 24 at Graham Chapel on the Campus of Washington University. 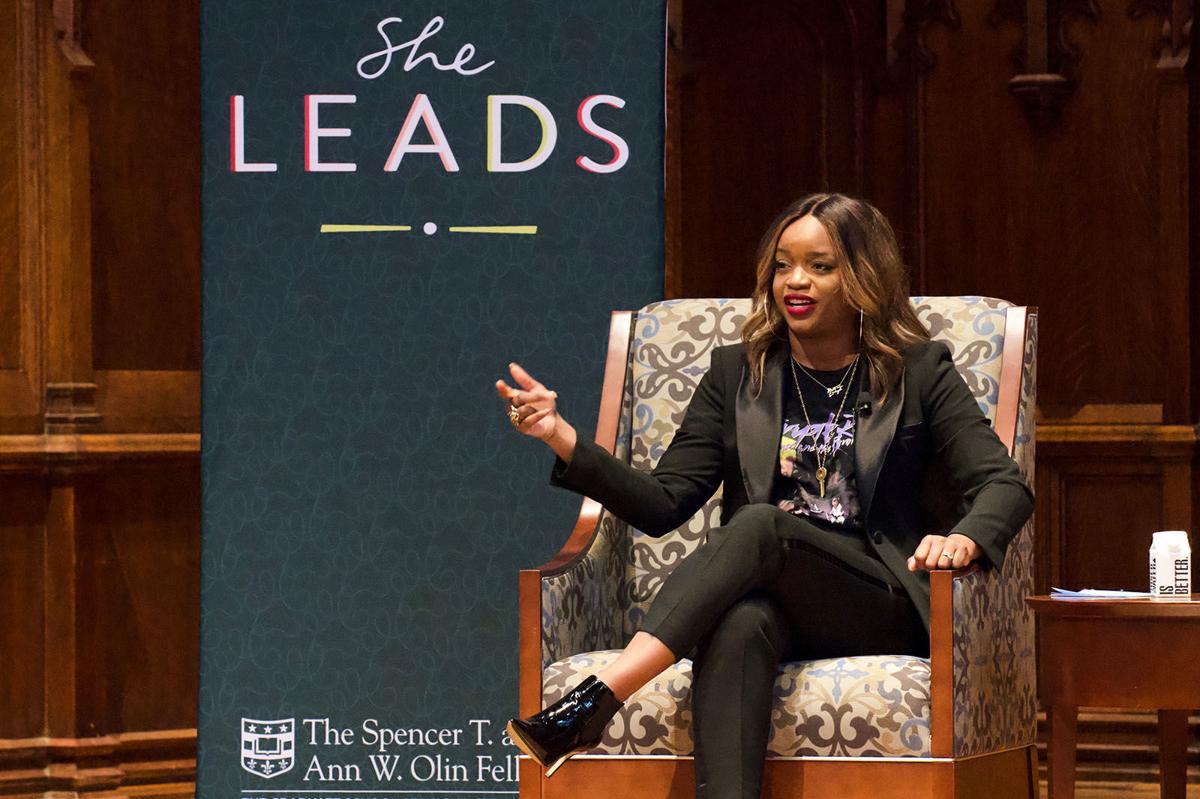 “There were folks in the room who didn’t know anybody who was marching in the streets of Ferguson except for me,” Brittany Packnett Cunningham said at She Leads, a women’s leadership conference presented by the Spencer T. and Ann W. Olin Foundation and Washington University on Thursday, October 24.

While introducing the opening talk for the She Leads conference Thursday, October 24 at Graham Chapel, Dean Diana Hill Mitchell, director of the Spencer T. and Ann W. Olin Fellowship for Women in Graduate Study, delivered one of many “aha” messages that came over the course of the two days.

She was quoting the words of Benjamin Godfrey, who founded Monticello College 1838 on what is now the campus of Lewis and Clark Community College in the Illinois city that would later be named in his honor.

He had an indirect hand in the conference that was about to commence, nearly 200 years after he became an educational pioneer with a higher learning institution for women to develop their intellect and fuel their curiosity.

When Monticello closed in 1971, endowments from the school became the Monticello Foundation – which three years later was poured into the program currently helmed by Hill.

They marked the 45th anniversary of the fellowship, which has given nearly 400 women the opportunity to pursue graduate and post-graduate studies, with the She Leads conference. Over the course of two days women leaders from all walks of life gathered to discuss their roles and the work of making space for the next generation of lady bosses.

They shared how they first met five years ago as a result of the protests in response to the death of Mike Brown, an unarmed teen fatally shot by a Ferguson police officer on August 9, 2014.

“A few weeks into the movement, a couple of nights before I met Brittany, there was a really harsh night of protest,” Reed said. “There was a lot of violence and brutality towards the protestors. I was a pharmacy technician at the time and said, ‘Listen, we’ve got to figure out some safety precautions. How do we make sure that everyone who comes out makes it home safe?’”

Reed organized a meeting to further discuss her concerns at Wellspring Church. A couple of the other frontline protestors thought it would be a great idea to invite Cunningham – who had also been demonstrating – to Reed’s meeting. Cunningham had not long since returned home after working as an educator and in educational policy in Washington, D.C.  to serve as executive director of Teach For America St. Louis.

“Brittany comes in with markers in one hand and what I call a massive Post-it note in the other,” Reed said. “We talked about everything – like how to send signals to each other.  The meeting was broken up into groups. I was like, ‘That was the most productive meeting I’ve ever been to. Who is this woman?’”

Both of their lives changed after that meeting.

“Being an executive director, in a seat that is well respected in the community, meant that there were folks in the room who didn’t know anybody who was marching in the streets of Ferguson except for me,” Cunningham said. “There were so many times where I knew my job was to help translate the frustration and justified anger, the wants and desires of the people on the street that I had audience with.”

Reed became a full-time activist. Cunningham brought her work as a Ferguson activist to her position.

Cunningham’s work in Ferguson led her to co-found Campaign Zero. She also was an appointed member of the Ferguson Commission and President Barack Obama’s Task Force on 21st Century Policing.

Cunningham said it was her responsibility to use her access to shift the demographics by giving others a seat at the table – to “kick the door open so wide and drag in 10 people who look like you so that the room looks completely different when you’re done.”

Cunningham said part of making that room look different is grooming girls to be leaders.

“We help young girls internalize the wrong messages very early when they exhibit those type of skills,” Cunningham said. “We tell them that they are bossy and that nobody likes someone who is bossy. That’s not true. We like people who are bossy, as long as they are men. We don’t have a problem with little boys telling everybody what to do on the playground. But as soon as a girl exhibits those skills, we try to redirect her to a much more quiet existence.”