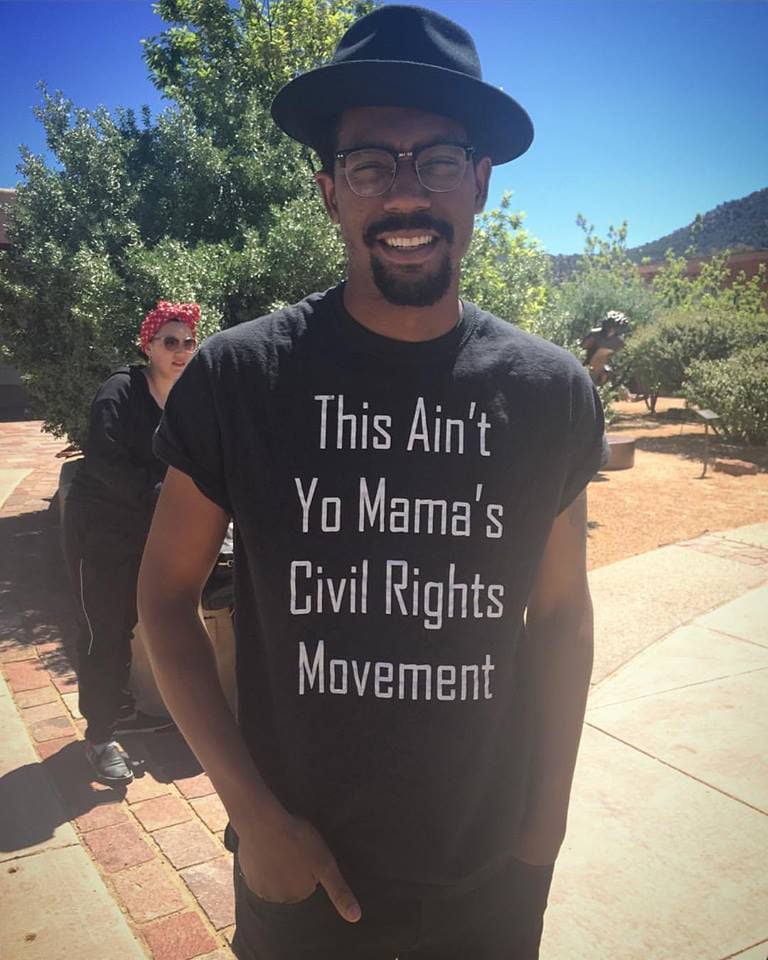 Local artist and activist Damon Davis is calling for a boycott of Contemporary Art Museum St. Louis, based on a current exhibit and a gallery talk devoted to it, while museum director Lisa Melandri is encouraging Davis and others who share his outrage to talk to her about it.

Davis was enraged by Kelley Walker’s exhibit “Direct Drive,” which opened on Friday, September 16, followed by a gallery talk by the artist and Jeffrey Uslip, the museum’s chief curator, on Saturday.

Uslip writes of one set of works in the exhibit: “Walker’s ‘Black Star Press’ series comprises images of racial unrest that have been digitally printed on canvas, silkscreened with melted white, milk, and dark chocolate, and rotated in ninety-degree increments.”

Here is Davis’ take, posted on Facebook on Sunday: “Kelley Walker, a white man, takes images of black women, and photos of black people being attacked by police and dogs, and smears toothpaste and chocolate on the images. This work is offensive to black people, black women in particular, and the black struggle for freedom that we and our ancestors have been engaging in since this country was founded.”

Davis, a versatile African-American artist best known for his positive creative responses to the Ferguson uprising, went to the gallery talk on Saturday already having formed this strong opinion. “I went to this talk to specifically ask Walker why he chose these images to use and what this art means,” Davis wrote.

The provocative New York-based artist, however, was not equal to answering this local audience member his work had provoked.

“When confronted with an actual black person, Walker became flustered and angry and had no actual answer for why he was using these images,” Davis wrote. “When he couldn’t answer my questions, the curator, Jeffrey Uslip, interjected and tried to explain for him. Walker and Uslip never answered my questions, and were both rude and condescending to myself and multiple people that asked questions that both related to race and not.”

Melandri, who was present for this exchange, does not dispute Davis’ account.

“I acknowledge and recognize that was a difficult situation and that people who were asking questions weren’t given answers,” Melandri told The American. “For that, I absolutely apologize. This is a space that welcomes questions and people who expect answers to their questions.”

Melandri encourages Damon and anyone else who has questions about the exhibit to contact her (lmelandri@camstl.org) and has since reached out to Davis and others. His Facebook post calling for a boycott of the museum had more than 500 shares and dozens of supportive comments by press time.

“I feel that it’s important and essential to us as an institution to reach out to artists who have expressed discomfort, unhappiness and whatever negative feelings they had, and try to work with them,” Melandri said. “We want to talk to everybody and ask, ‘Now, what shall we do together?’”

Judging by Davis’ original post, the only thing that the museum could do “together” with Davis is to take down the exhibit, which is scheduled to hang until the end of the year, accompanied by a monograph with contributions by a Museum of Modern Art curator and a New Yorker staff writer.

“I am asking for everyone in this community that understands how damaging this is to join me in this boycott until this work is removed and the museum issues a formal apology to the black community and the black members of their staff for this disgusting display,” Davis wrote.

The museum posted a formal apology that the dialogue at the gallery talk was so inadequate and unhelpful, but Melandri defended Walker’s work in the exhibit.

“Kelley’s work is about reusing, transforming, recycling images that are very salient in our society,” she told The American. “He makes us rethink various moments in our history and culture and try to decide what we as individuals feel about those moments. His work is so deeply engaged with history and culture that it’s a wonderful place to hold a mirror up to our current society. That’s why we feel this work is important and should be seen.”

Davis insists the work is, if anything, a distorted and dangerous mirror that reveals more about the artist than the public – and that it should not be seen.

“Schools take black children to this gallery,” Davis wrote. “When they see these images, they are being told that their bodies, their history and their stories are disposable and always up for use by any privileged white man and institutions that feels like using them to get some press.”

While Melandri agrees with Davis’ description of the gallery talk – and respects his opinion of the art work itself as a valid response that deserves to be heard and discussed – she pointed out one mistaken inference in his Facebook post. Davis said a video of the gallery talk was deleted, but Melandri said it was only livestreamed and the museum does not have legal rights to post it.

Kelley Walker, contacted via the New York gallery that represents him, did not return a request for comment.

To speak to the museum director about the exhibit, email her lmelandri@camstl.org. For more information on the museum or exhibit, visit camstl.org.

This is a very critical issue and gallery talks need to be open to many viewpoints. But when art is offensive to people and cannot be defended by the artist, something is very, very, very, wrong. Why was this artist's work chosen? I had a first visit to the museum planned, but will postpone it until there is an apology by the artist and the museum. Having worked in a museum for 2 years, a former art teacher, and active in the arts until becoming very ill, and earned my acceptance from my black students in an urban high school, I understand these issues. I will support the boycott and truly hope museum curators and educators will take time to research the fallout that is possible when hosting a controversial artist. This artist could not defend his work. That is unacceptable. Don't create "art" if you don't understand the subject you chose.

It used to be conservatives who railed against art they felt was obscene or offended their sensibilities.
I say the following as a self described progressive , albeit one who doesn't toe any party line: this sort of behavior is why the term "regressive left" is a thing.