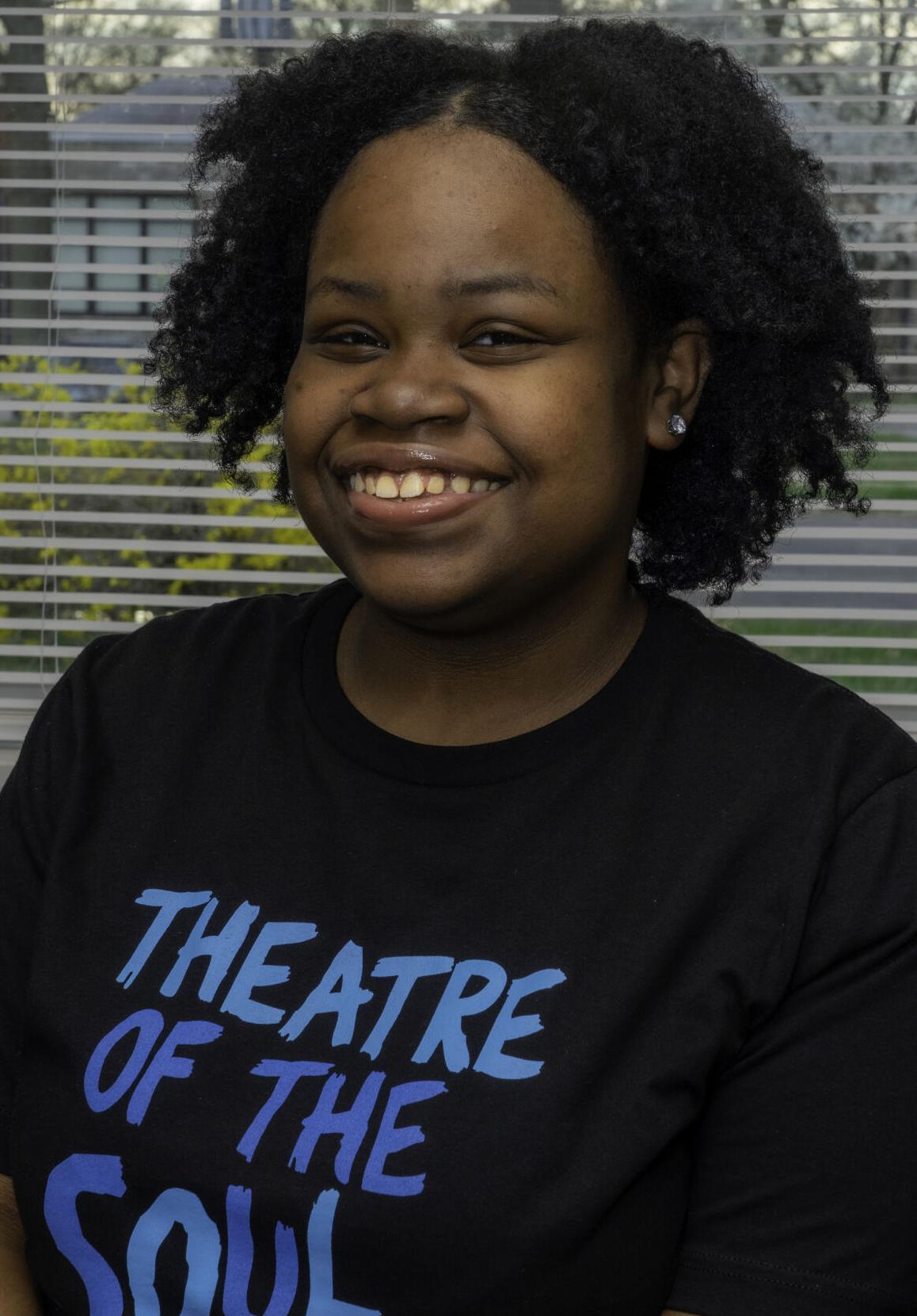 Kimberly Jenkins at her home on Mar. 30, 2021. She is currently taking classes in visualization and improv and talked about how much she enjoys the improv.

Kennedy Jenkins had a bit of trouble with the tongue-twister she practices at home. The 15-year-old, grade 9, Hazelwood East student has been involved in the Black Rep’s six-week Summer Performing Arts Program for the past four years. Children, ages 8-17, receive instructions in acting, movement, voice, writing, creative costume crafts and more.

Her mother, Kelley D. Harvey, thought the program would be a good fit for her active but somewhat withdrawn daughter. Harvey is a published author and is an active participant in plays at her church. In one production based on the Wizard of OZ, Kennedy played the lead role and had to belt out singer, Tamela Mann’s gospel song, “Take Me to the King.”

“She was kinda shy,” Harvey remembered. “I thought she could have sung it with more confidence. But since she’s joined the Black Rep, her confidence in performing has gotten better, which is what I was hoping for.”

At the time, Kennedy had her sights pegged on dancing. Always supportive, her mother signed her up for dance classes with Dance Plus Studio at an early age. Once Kennedy followed her mother’s advice and joined the Black Rep, acting superseded dancing.

Acting has given Kennedy a way to cope in perilous times. She’s been taking virtual learning classes for about a year, which she found lacking:

“At first, it seemed like the teachers and students were very confused. It (virtual learning) wasn’t as organized as it is now,” Kennedy explained. “The isolation and not being able to go anywhere made me really sad. I like going out, driving, seeing places like the new aquarium, I like being on the road.”

The coronavirus did delay the usual start date of the summer program last year, but the young actors were able to gather albeit with strict safety and social distancing requirements. It was a good thing for Kennedy whose world was also rocked by the murder of George Floyd by a Minneapolis police officer in May of 2020.

“I was in elementary school when Mike Brown was killed but I remember not understanding why we are judged by skin color at all. It made me upset and sad,” Kennedy said. “When it happened again with George Floyd, it gave me flashbacks to 2014. The racism and stuff hit me really hard.”

Kennedy credits Tyler White, the director of the summer arts program and the Black Rep staff for encouraging students to discuss challenging issues like police brutality. Those conversations, she said, were crucial for her:

“They talk to us about how to stay safe and how to interact with police. Some of my Black Rep friends are really into those issues. I am, too, now. But talking about it helped a lot.”

Learning the art of acting has changed how Kennedy watches television programs and movies.  She’s not thinking about becoming a director or set designer at this time but now she’s aware of the intricacies involved with making movies and TV shows; like lighting, set designing and visuals. She’s a big fan of actress Keke Palmer and actress Elizabeth Olsen, of Marvel’s “WandaVision” and movies from the Marvel Universe.

Kennedy has acted in the end-of-the-summer Black Rep production students put on for families and friends. She’s performed in the Black Rep’s plays “Freedom to Me” and “Keisha” and played the role of “Janie” in the 2019 Black Rep and COCA collaboration, “Four Little Girls: Birmingham 1963-2019.”

Kennedy, who’s up for playing comedy or serious roles, is attracted to crime shows. She’s trying to better her game at emoting and projecting in serious roles. She believes “Ms. Tyler” has homed in on her aspirations. During a recent class exercise, Tyler singled Kennedy out for a role of a mother whose child had just been gunned down.

“It was like screaming and yelling and stuff,” Kennedy recalled. “I’d never done anything like that before and I kept messing up. Finally, Ms. Tyler said, ‘Kennedy, I want you to do this but if you can’t, I can give it to someone else’.”

“I knew she was trying to push me. So, when she said that, I got it right. I had to go deep down but I was really proud of myself that day.”

Kennedy is going deep in her desired profession. She’s already looking to enroll in a historically black college or university that offers acting courses. She said aspiring to the life of a thespian is helping her navigate the perilous worlds of COVID-19 and police brutality and so much more:

“Acting gives me hope in times like these. I’m focused on how great I can be as an actress. I’m taking this time to perfect myself and work on my creativity.”