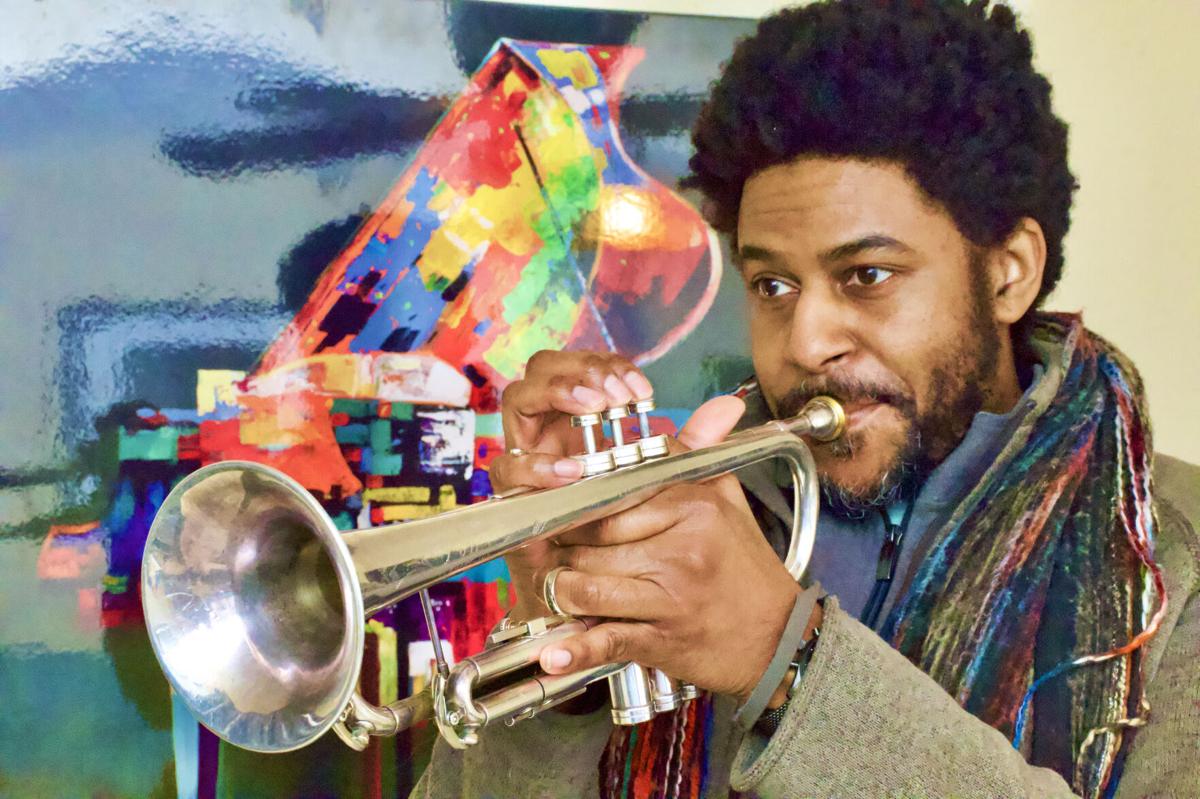 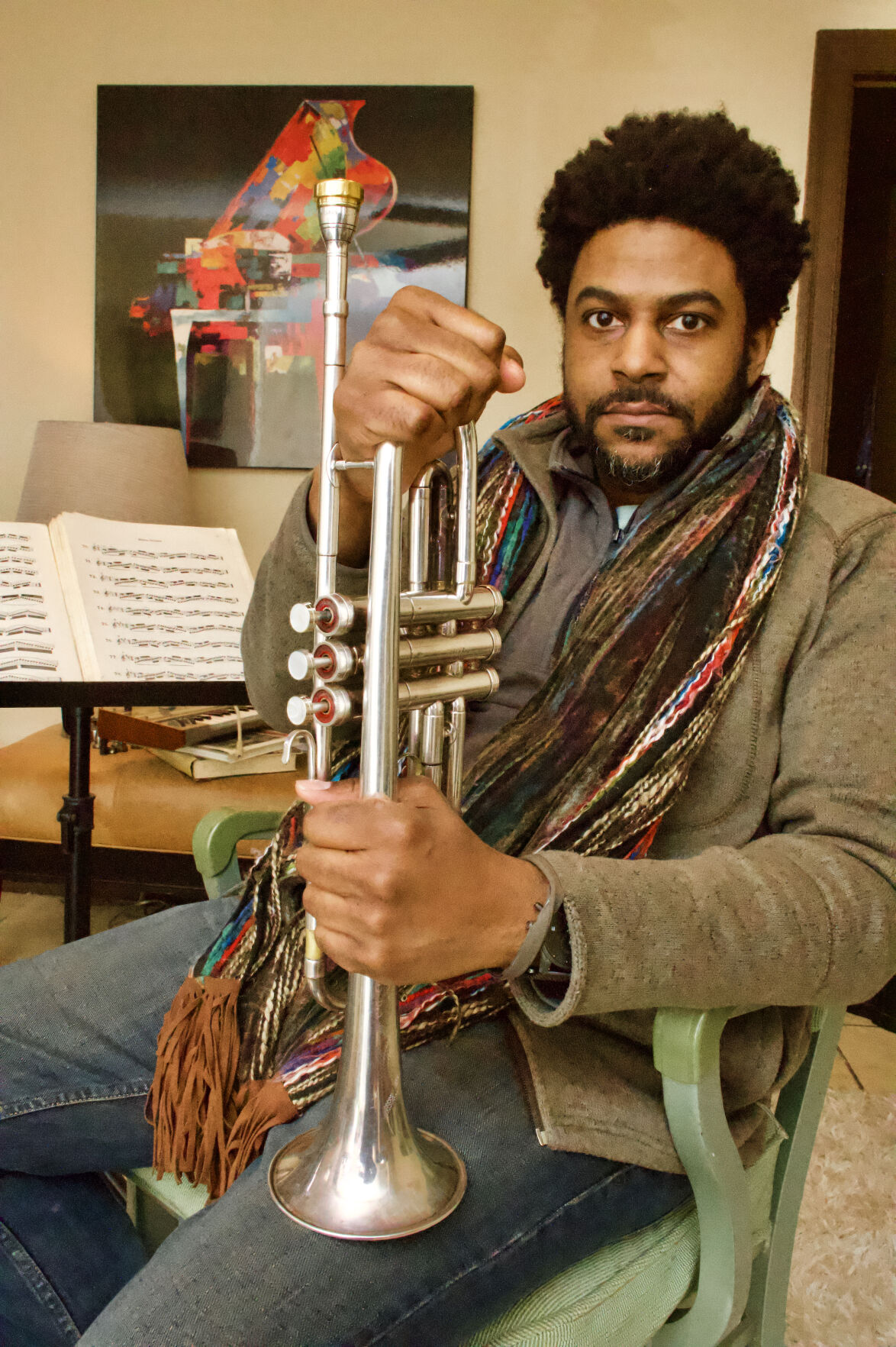 Davis spoke to the artistry of music-making. But for Kasimu (pronounced KAH-see-moo), Taylor, 47, a trumpet player since the age of eleven,’ the “silence” Davis described has a more devastating meaning these days:

“My last paying gig was in late January. During the first month or two of the lock-down, I wasn’t doing anything. I had this lack of motivation because my whole livelihood was basically gone. I was trying to figure out how to keep income coming in. It was just a stressful time.”

COVID-19 was not the only stressor in Taylor’s life. He said he’s always been passionate about political, social and racial happenings. He recalled how his funk intensified in mid-May:

“We had the whole thing with a crazy president and a totally stressful environment. I was not only struggling financially, I struggled with my purpose,” Taylor confessed. “What part does music play in this madness, what’s my purpose? And then the George Floyd stuff popped off.”

In a way, Floyd’s murder by a Minneapolis policeman, sparked Taylor’s rebound:

“I felt I couldn’t do another show without addressing that (incident), Davis admitted.

He channeled his anger into an ensemble piece titled “George Floyd” that he wrote and performed at the Grandel Theatre’s open-air series in September. The piece was inspired by comedian Dave Chappelle’s “8:46” standup performance in June:

Taylor crafted somber and angry rifts to accompany Chappelle’s looped voice as he said things like: “I can’t tell you, as a man watching another man go through something like that, what it makes you feel like.” Taylor was comforted when the audience, who he feared might find the piece too militant, seemed to resonate with his work.

Writing and performing the song reminded Taylor of his “purpose” as a musician. The 2019 Showtime documentary, “Hitsville: The Making of Motown,” was another motivator:

“There was a part in the documentary where Dr. King met Berry Gordy (founder of Motown Records) in Detroit,” Taylor recalled. “King told Gordy that Motown’s music had helped his movement, it helped desegregate America. It reminded me that you should never discount the impact that music has had in social change.”

Racial awareness has been a part of Taylor’s reality since the tender age of three. At the time, his mother and father (Gary and Mary Taylor) lived on Howard Street off Jefferson Ave. with their four children. Taylor, the middle child, remembers peeking out the back window of his home and seeing two policemen harass his father in the back alley.

“He had driven to the store to get something. He told me later that while driving home he noticed the cops staring at him. I guess because he dared to make eye contact with them, they followed him home, told him to get out the car and harassed him.”

There were other racial incidents in his life, like the time when he was 13 when he and his brother were kicked out of a downtown mall by a security guard who found them suspicious.

Taylor found comfort and camaraderie with great trumpeters like Miles Davis and Lee Morgan. He remembers when he first started playing the trumpet, listening to early recordings of the two artists such as Miles Davis’ “Young Man With A Horn, released in the early 1950s and Morgan’s “The Sidewinder” (1964).

“They made me want to sound like them, especially Miles. He didn’t compromise his style or vision. He was always evolving and trying something different. Plus, he had that cool look.”

Taylor stuck with the trumpet through his school years at Humboldt Middle School (now Humboldt Academy of Higher Learning), Central Visual and Performing Arts High School and later at Webster University’s jazz studies program. He fondly recalls his first paying gig at the age of 12 when he was paid $60 to join an ensemble group for an Easter performance at Gethsemane Lutheran Church on Hampton Ave.

Other paying gigs came at the age of 19 starting with his “friend and mentor,” alto saxophonist, Chad Evans. He went on to play with a local salsa band, El Caribe before joining the Dr. Zhivegas band, at the age of 23, for about seven years. Taylor has gone on to establish his own ensembles; a jazz band called “Kasimu-tet” and “Howard Street,” a soul & R&B group. At the beginning of 2020, he had gigs and themed shows (like his 2019 Miles Davis tribute) lined up for the entire year. But, because of COVID-19, most were canceled.

Taylor has gotten by with financial assistance from family and friends, nonprofit grants, unemployment insurance and the government’s stimulus check. These days, he describes himself as “optimistically pessimistic.” In reflection, he said he has found something positive in the “silence” brought on by the pandemic:

“I feel like I needed the down time,” Taylor explained. “Artists are always on the go, always looking for that next thing. The virus allowed me to slow down. I’ve been vegging out, watching Netfix, listening to music, studying various method books and focusing on how to be better when stuff finally opens back up.”

Other than being a better musician, Taylor has one more simple desire:

“I just want to get back to the stage sharing the gift of music and making money on a regular basis again.”