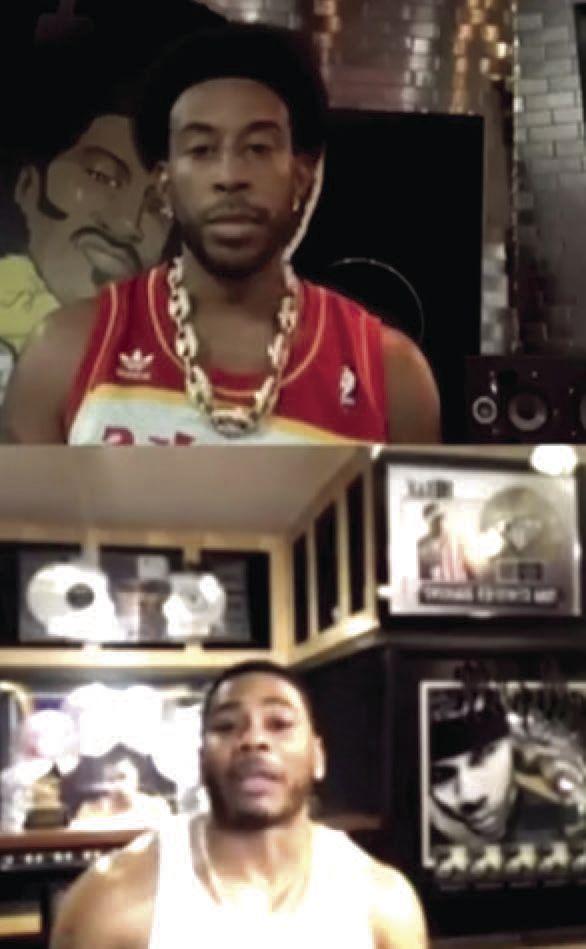 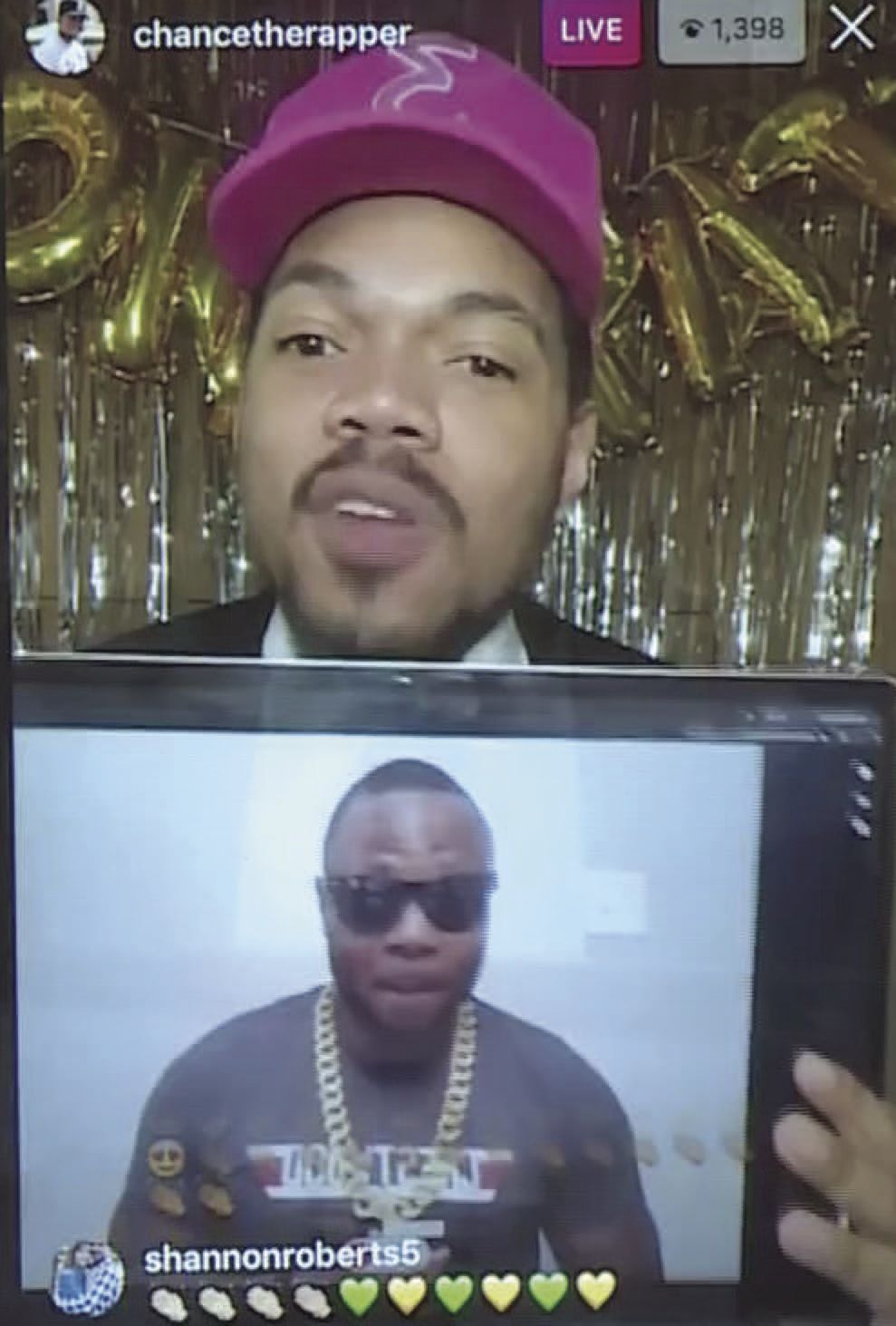 Chance The Rapper and Crestwood Elementary School PE Teacher Darrion “DC” Cockrell chatted over Instagram Live as Chance recognized Cockrell for his work as an educator at the inaugural Twilight Awards presented by Chance and Box Tops for Education on Friday, May 8.

So here’s the thing. By now the whole world has had a cackle at the expense of Nelly’s internet woes. I think my favorite was the one that took his frozen screen and made abstract art from it. It wasn’t his fault. In the words of the musical false prophets Milli Vanilli, “blame it on the rain.” Ultimately, it was the song choices that ended up giving Ludacris the victory for the latest Verzuz battle that has helped us tremendously in passing the time as we stay perched because of The Rona. To make it St. Louis plain, on my mama Nelly has the better playlist between him and Ludacris. It wasn’t just because I’m ALWAYS rooting for the home team. Ludacris had an unfair advantage in that his early work as a DJ clearly taught him how to curate a playlist.  I will accept that with the exception of “Tip Drill,” Nelly chose the wrong songs to pit against Ludacris. It was like a game of spades gone wrong. People always talk about the player who wastes spades by cutting hearts, but this was an example of what happens when you hoard your Ace of Spades and jokers until the opposition is already up by six books. That being said, I was happy to see Ludacris be so determined to see the battle through even if the thunderstorms were set tripping all over Mo’s Wifi. And I give double points to Luda for giving Chingy a moment while the service was spotty – and triple points for being so graceful when he talked about Nelly’s contribution to hip-hop and repping for St. Louis. They both deserve props for how gracious they were over the course of the three-hour event. They were a bit too chatty… okay, more than a bit. But the bottom line is this. Luda ruled the battle and showed the power of a perfectly arranged playlist. But Nelly is the boss of the hits. If you were looking for more shade, or any sort of admission for me, I’m sorry to have disappointed. I will say that I got a good kee-kee from Luda shouting out Ali, as an “I see you, but I’m not going to bother addressing your accusations.” Oh, and before I go, let me just say that Spice Adams and Affion Crockett are the lowest of the low for their reenblactment of the whole doggone battle. I’m not going to sit here and say I didn’t cackle, but they were still low down, dead wrong and quietly dead on. Does anybody remember if Spice was holding a Raising Cane’s cup during his Nelly portrayal?

STL on MTV. Since I’m already talking about our city having a major national platform, I might as well mention what happened Monday night on MTV. Actually, it was MTV, MTV2 and VH1 at the same doggone time. After cleaning up awards during film festival season and being nominated for an Academy Award, the world finally had the chance to see what the buzz was about when “St. Louis Superman” made its way to television. The cameras followed Bruce Franks Jr. as he battled rappers and introduced legislation in the fight against gun violence in honor of his big brother, who was tragically killed at the tender age of 9. The film gave insight into why he fights so hard for the community he loves and how he was activated to make a difference through politics. I must say that I had a feeling when he was strictly known as “Oops in the Building” that he might make it to MTV. This was not how I imagined it to go down, but it was beyond what I could have imagined or expected. The documentary was a great look and I hope it inspires others to get busy about being the change they feel like they need to see. Shout out to Bruce for being so transparent. I’m sure that you have saved lives by inspiring others to put their mental health and wellbeing first – and understanding the power and importance of making self-care a priority while pursuing passions and purpose.

Virtual Mayday parade’s $80K payoff. Thanks to The Rona, for the first time ever in my whole entire life I did not spend my third Sunday in May assuming that everyone was jealous of me as I showcased my drip up and down the May Day parade route. I was a nervous wreck that because the parade was cancelled, that Annie Malone Children and Family Services Center would suffer tremendously from a financial standpoint. We tend to forget as we get a chance to get dressed up and fanatically root for our alma mater as they bop down the block in that hot band gear – Normandy, Sumner, Riverview Gardens and U. City, I’m talking about you – that the parade is the biggest source of fundraising revenue for the center. They were bracing for a $100K deficit. But Bold Moves team of Koran Bolden and Vanessa Townsend (and a whole heap of folks giving and helping out on their behalf) worked with Annie Malone to make sure that didn’t happen. Folks from all across the city, county and country came through in the clutch for the first-ever virtual parade on Sunday. It almost felt like the regular parade when William C. Harris and their white limos kicked things off with their motorcade. But when Pat Washington did her own personal remix of “Bag Back (Gimme 50 Feet) for the sake of social distancing, I knew things were going to be different. But the virtual parade, with City Treasurer Tishaura Jones as its Grand Marshal, made lemonade out of lemons when it came to the coins. I was so proud of my city standing up – over 2,000 folks came through with the kind of money that folds – $80K to be exact. Shout out to all the folks who contributed with their talent and time – like Rhoda G., D.J. Climate and other folks – to make the virtual parade worth watching. Oh, and a special shout out to Fox 2’s Elliot Davis for his initial $5,000 donation. And I would be foolish if I didn’t bow my quarantine foam roller bangs to all the people at the organization who serve children and families in need – which is more than likely made greater by The Rona. Does anybody else already have their parade outfit in mind for 2021? I have a feeling I will be so hype after my first absence that I might just get a plus-size dance team uniform custom made and shamelessly insert myself by marching behind my favorite performers. The techniques I observed from Baton Bob all those years ago while almost running somebody off the road every time he tooted and high kicked down Kingshighway might finally come in handy.