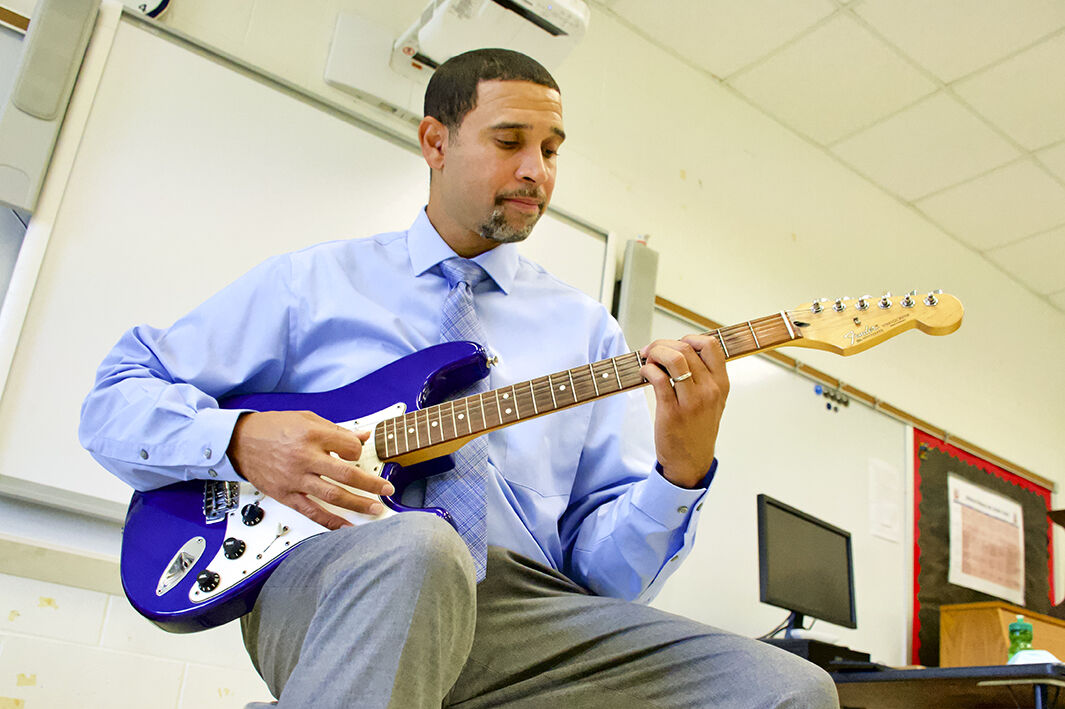 James Young, 44, grew up surrounded by music. His father was a drummer in a touring band, Nobody’s Perfect, and Young followed the band on international tours, including stops in the Philippines. Young’s grandmother sang in church, “And we always sang around the house,” he recalled.

So, though it “wasn’t plan A to be a music educator,” becoming a musical theatre teacher was a great fit for Young. He has served the Ferguson-Florissant School District for 14 years and is receiving accolades for his teaching ability.

“I think it was others that called it out of me,” he said, recalling a time as a teen when his great-grandmother looked at him and pronounced, “you’d be a great teacher.”

But he did not immediately follow his great-grandmother’s calling. After spending his teen years growing up in Kinloch, Young enlisted in the Army. Afterwards, he says he drifted.

He started playing guitar in his own local band, but was unsure what he wanted to do beyond that.

“I went back to school for music,” he said. “But my grandmother said, ‘why don’t you consider music education…so you can have a plan B’?”

That Plan B turned into Plan A, as Young discovered a great love for the work of teaching young people.

His grandmother, a former Ferguson-Florissant teacher, even came into the classroom sometimes to help him out. And through those years, he learned that teaching was not about him: it was about his students.

In particular, Young is focused on culturally responsive teaching — teaching young Black kids who are growing up not far from where he grew up in a way that makes sense given those kids’ culture and life experiences.

“A culturally relevant learning environment, for me, looks like being sensitive and aware of where my students are coming from,” he said. “Using my own background, my own interests…but also keeping my ear to the street a little bit and doing things in a way that lets them know that their strengths and their interests are relevant in the classroom.”

He is rhythmic in his teaching — literally. Young puts concepts to a beat whenever he can and teaches musical concepts like melody and harmony via rhymes.

“Beat is a pulse, rhythm is a pattern like planets 'round the sun, like Jupiter and Saturn,” he claps and chants, and encourages his students to make improvised rhythms with body percussion or bucket drums.

Like everything else, though, Young’s classes had to undergo drastic changes over the past year due to the pandemic. He’d planned on putting on “The Lion King Jr. The Musical,” but instead created a Google Site showcase of students’ work in music, dance and art.

Instead of onstage, students performed alone in front of their screens at home—a format that, Young notes, is something some students were more familiar and comfortable with. Thanks to apps like TikTok, students who were “shy and reserved” in in-person school became superstars when asked to engage in musical theatre through their screens.

“So the aim shifted,” Young said.

“From what we can do live, to how we can produce something in a recorded version.” But some things didn’t change: Young’s greatest goal, online or in-person, was to help them cultivate happiness and confidence in themselves.

“I want students to gain a sense of confidence in who they are, and a sense of professionalism, so they can grow and become confident individuals when they leave here,” he said.

“I don't anticipate everybody growing up to be, you know, a Broadway musical star, but everyone needs to learn. Students need to learn how to present themselves in the best way possible.”