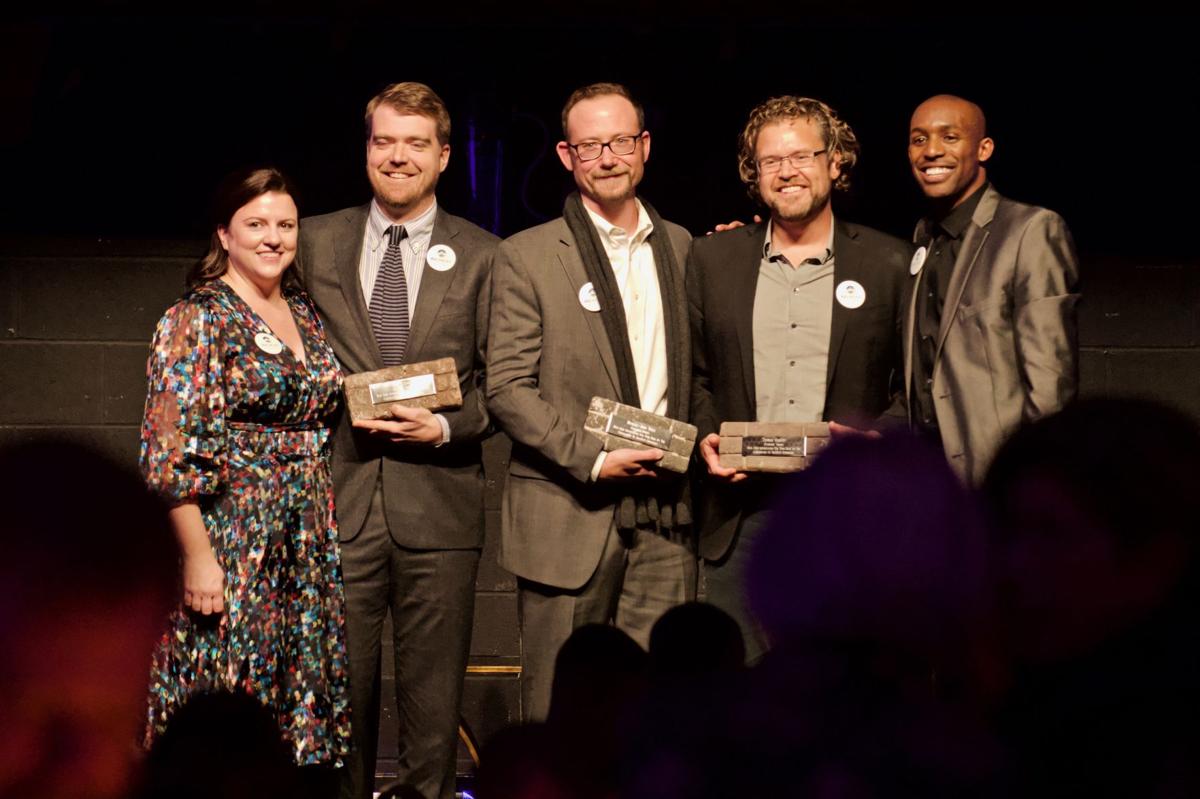 Jacki Langum, director of Advocacy, for ArchCity Defenders, and Blake Strode, its executive director, bracketed ArchCity Defenders cofounders John McAnnar, Michael-John Voss and Thomas Harvey at the celebration of its 10th anniversary at the Stifel Theater on Friday, November 8. 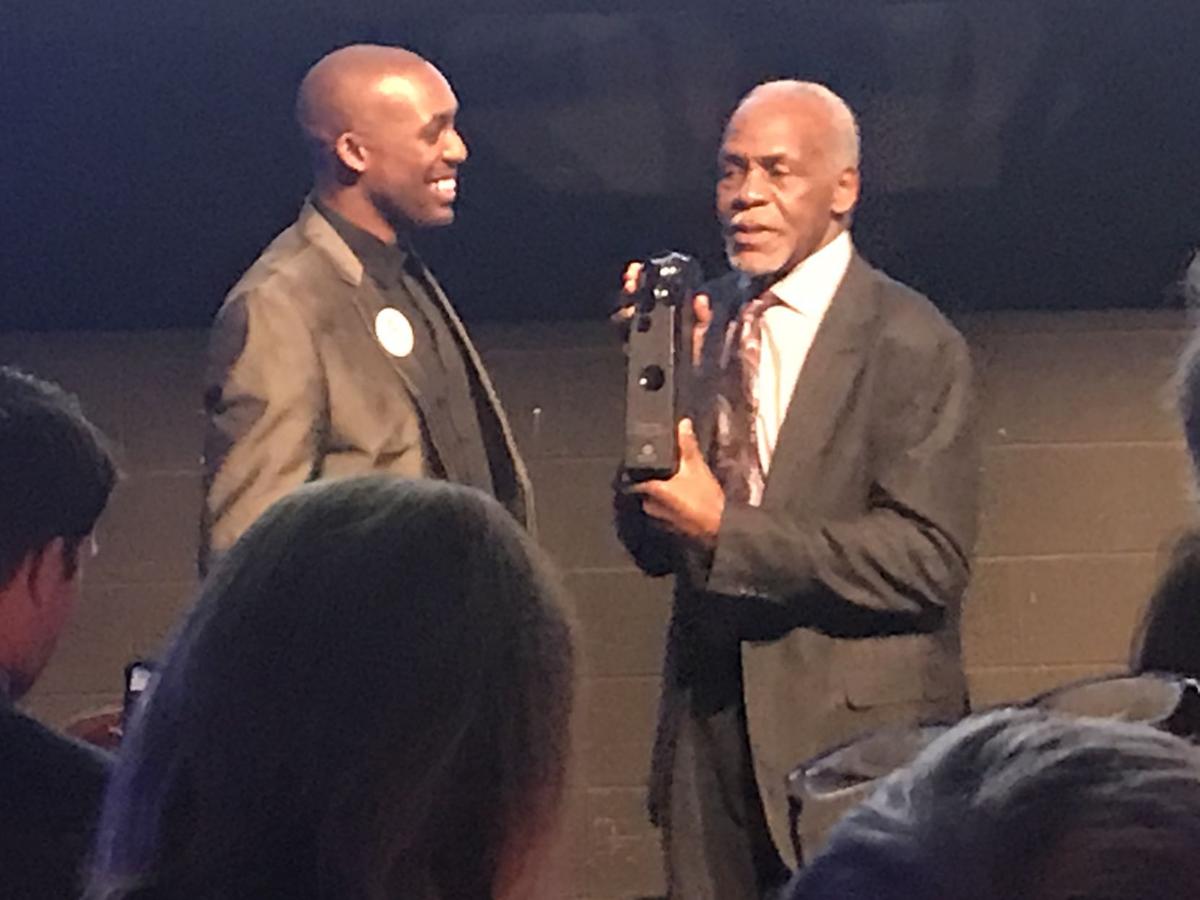 Jacki Langum, director of Advocacy, for ArchCity Defenders, and Blake Strode, its executive director, bracketed ArchCity Defenders cofounders John McAnnar, Michael-John Voss and Thomas Harvey at the celebration of its 10th anniversary at the Stifel Theater on Friday, November 8.

The cofounders of ArchCity Defenders – three white male graduates of Saint Louis University School of Law – deliberately recruited black leadership for their civil rights firm a few years ago, and this decision set the tone for its 10th anniversary gala held Friday, November 8 at the Stifel Theater in downtown St. Louis.

Executive Director Blake Strode – the board’s unanimous decision to succeed cofounder Thomas Harvey at the helm – presided over the gala, along with Kayla Reed, leader of ActionSTL and Strode’s buddy and ally.

This young, black leadership brought spirit and sass to the celebration of 10 years of elevating the poor and undermining systematic racism, mass incarceration, and their mashup in the St. Louis County municipal courts and St. Louis Workhouse.

For example, the superhero capes.

“You guys are going to hate me,” Strode said as he surprised Harvey and his fellow cofounders Michael-John Voss and John McAnnar with a fitting. As Strode and Reed know, the cofounders cringe at the notion of white saviors coming to the rescue of oppressed black and brown people. Yet there they were being fitted with superhero capes in front of hundreds of people.

Harvey, who became the eloquent and passionate voice of ArchCity Defenders during the Ferguson unrest, could barely be kept onstage for a minute. The most memorable line from the cofounders came from the less-well-known Michael-John Voss, who remains with the firm as its special projects director. He said the night was a celebration of the firm’s clients, “their truth and their voice,” then disappeared into a large, diverse crowd of people powerful in many different kinds of ways.

Strode and Reed also pivoted away from the typical anniversary gala, which drones on reciting victories and milestones that the people who care enough to attend such an event already know (and, probably, helped to make happen). Instead, they staged a live recording of the podcast that they produce for ArchCity Defenders, “Under the Arch” – with a very special guest.

The young, black leaders summoned black elder energy to celebrate the anniversary. Danny Glover was in the house. And Danny Glover did not bring that celebrity cameo routine familiar from so many star turnups – that 20-minute set speech that the audience feels like it has heard before because the celebrity obviously has spit it out so many times before.

This was Danny Glover, at home with his shoes off, talking to family from the deep recesses of his soul and his memory. The podcast episode, once edited, simply must be heard for his epic expression of compassionate humanity.

For example, he remembered visiting Venezuela with Harry Belafonte when Hugo Chavez was president. Chavez, of course, was trying to show his celebrity freedom fighters the highlights of his administration and his nation, but Belafonte insisted on being taken to see some prisons.

Chavez wanted to know why.

“Because my people are there,” Belafonte said.

As Reed, a preacher’s kid, said, “The doors of the church are open.”

“These guys save people’s lives,” said Katie Plax, MD, who directs public health centers for area youth for BJC HealthCare and knows something about saving lives.

Strode and Reed closed the gala proper (before the lobby afterparty scored by Kim Massie and band) with a traditional element of the fundraiser, the live hustling for dollars. Reed led the way brashly in the spirit of a preacher’s kid who sees God watching approvingly as the collection plate is passed among the faithful.

In the lobby were poster board displays that told more of the traditional story typically recited from the stage at such a milestone anniversary. It chronicled ArchCity Defenders’ amazing rise from a “crazy idea” (Harvey said) in the heads of three penniless, heavily indebted, law school graduates to a national model for holistic legal advocacy.

Danny Glover got the memo.

“You know where exactly they stand in relationship to building community,” Glover said of ArchCity Defenders, “and drawing upon our ability to build constructive change.”

Get involved with or donate to ArchCity Defenders at www.archcitydefenders.org.