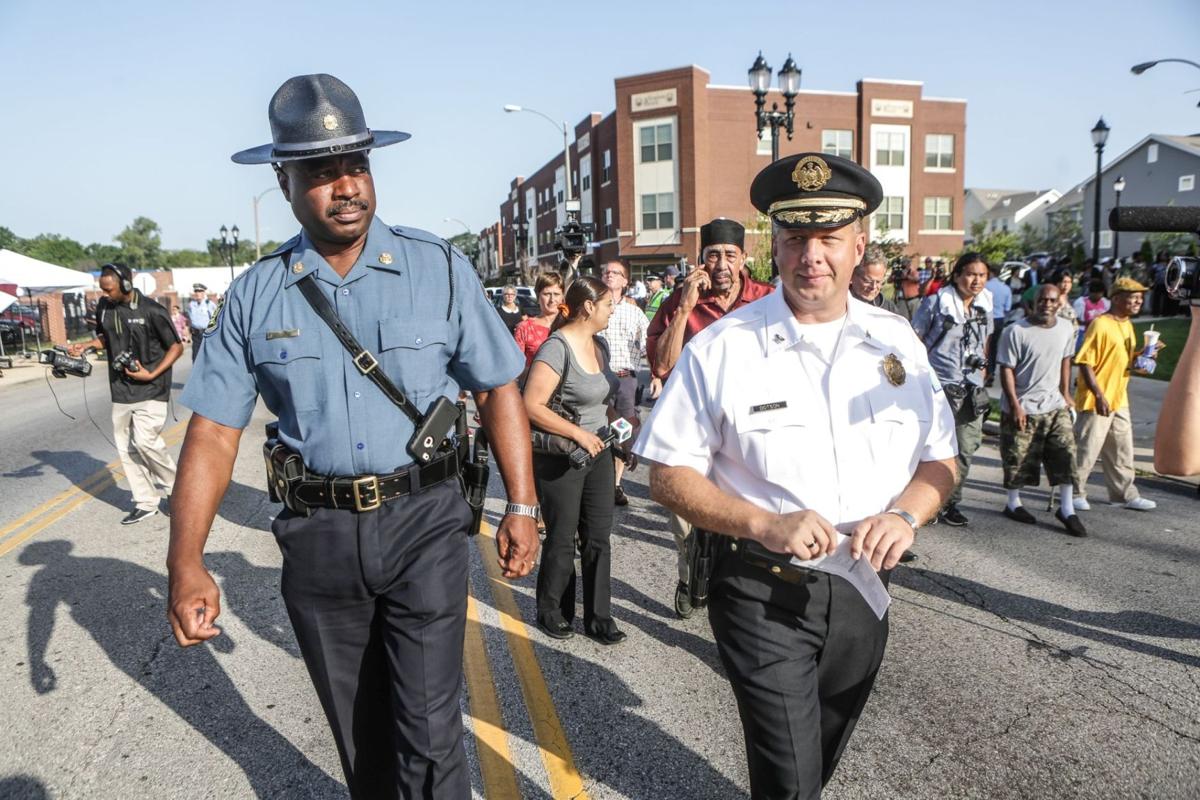 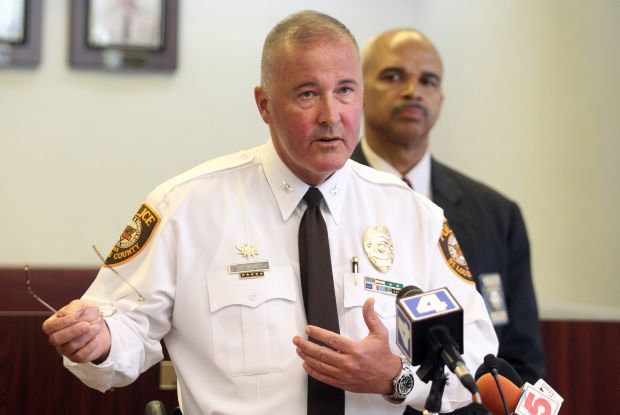 St. Louis County Police Chief Jon Belmar responds to a reporter’s question during a press conference responding to Department of Justice widening its civil rights investigation of police departments in the county. Standing near is County Police Board Chairman Roland J. Corvington.

St. Louis County Police Chief Jon Belmar responds to a reporter’s question during a press conference responding to Department of Justice widening its civil rights investigation of police departments in the county. Standing near is County Police Board Chairman Roland J. Corvington.

Belmar said he expects that St. Louis County Prosecutor Robert P. McCulloch will release the report to the public at a press conference in the event that the St. Louis County grand jury does not indict Wilson. Belmar said McCulloch promised to notify him the moment the grand jury reaches a decision. McCulloch’s office told The American he expects a decision in mid- to late-November.

McCulloch reportedly has been pressured by some school districts and businesses to make the announcement on a weekend, due to expected unrest. Police sources in St. Louis city and county tell The American an announcement on Sunday, November 23 is possible, despite the fact that Thanksgiving is the following Thursday.

Belmar spoke to the news staff of The American along with St. Louis Metropolitan Police Chief Sam Dotson and Missouri State Highway Patrol Captain Ron Johnson. They form the leadership of the Unified Command that will police the protests being planned in response to the grand jury announcement. Given Missouri laws pertaining to police shooters and the racial demographics of the grand jury – nine white and three black jurors, as empaneled by a district judge before the August 9 killing of Brown – most protestors do not expect for Wilson to be indicted.

Gov. Jay Nixon has announced that a statewide police response is being organized in expectation of the decision, which suggests Nixon – formerly the Missouri Attorney General and a longtime ally of law enforcement – does not expect an indictment.

Nixon announced that police were coming to St. Louis “from all over the state” once a decision is announced, but Belmar told The American Nixon only referred to state troopers under Johnson’s command. Belmar said that no police officers from other departments in the state will be mobilized.

Belmar also said self-deployment by area police officers would not be tolerated, as it was during the unrest in August, which he said led to some of the worst embarrassments, such as the St. Ann police officer who lost his job after being caught on camera threatening to kill protestors.

“When people self-deploy, they don’t check in, they don’t understand the rules of engagement,” Belmar said. “People will have to check in.”

There also have been protests in North St. Louis in response to the fatal police shooting of Kajieme Powell on August 19.

This arrangement removes Johnson from any specific command responsibility. His leadership in the Ferguson protest zone, directed by Gov. Jay Nixon after declaring a State of Emergency, had a calming effect in August. Johnson at first replaced the militarized SWAT team tactics introduced by Belmar with a community policing model. However, police under Johnson’s command also at times resorted to riot gear and crowd dispersants, such as tear gas, and most protestors have ceased to see him as a clear alternative to Belmar.

Johnson is a black man from Ferguson. He speaks movingly of being a black man who gets racially profiled when he’s in civilian clothes and as the father of a black son he has to warn about the police. But his very presence in the Unified Command renders him suspect to many protestors. On November 12, Tef Poe – the St. Louis writer/rapper who emerged as a Ferguson protest leader – released a single, “War Cry,” that dismisses Johnson as a “house (slave),” couched in expletives and using an offensive racial epithet.

Johnson said the three police commanders have “lived this” and lived it “together – physically and emotionally.” He insisted – despite the police build-up of a new arsenal of crowd dispersants and Nixon’s tough talk – that the Unified Command has learned some lessons.

“You’re going to see we’ve been listening to peaceful protestors and we’ve learned some things,” Johnson told The American. “But I don’t think what we are bracing for will be as bad as we expect it to be – or as bad as some people want it to be.”

Belmar insisted that his heavy-handed militarized approach to the August protests – which were presented to the United Nations as acts of torture by protestors’ legal supporters last week – saved lives. “Think of the problems we didn’t have,” Belmar said. But he will go so far as to admit “there were inappropriate actions on both sides.” He also said the next wave of police response to protests “will not have the same optics, necessarily,” as seen in August. When Belmar speaks of “optics” he is referencing the world-notorious images of police officers under his command pointing high-powered rifles at peaceful protestors with their hands in the air.

“People say we’re preparing for war – we’re not,” Dotson told The American. “We’re preparing for peace. We just have to not infringe on the rights of other people. We have to keep everybody safe and arrest the people responsible for violence. We’ve talked to peaceful protest groups and asked them to work with us to help make things safer.”

A nationally organized group that advocates violence against the state has been present in Ferguson and St. Louis since the early days of the protests, when residents of Canfield Green first told The American that “white men who dress hip-hop” taught young protestors new chants and showed them how to make improvised firebombs known as Molotov cocktails. Many activists from this group were arrested on August 18, resulting in an immediate calming of protests, but others remain and some of those arrested previously have returned.

Belmar said police remain concerned about several sets of agitators, mostly from outside of the region but also from inside the protest group. The three commanders agreed that – despite the efforts and vows of peaceful protestors – potential violence remains a concern that they are prepared to address. If necessary, they said, police will don riot gear and use crowd dispersal agents after giving due warning to protestors.

They also agreed that the KKK is not a violent group that should concern the public or protestors, despite violent threats from someone purporting to represent the Klan.

“Let me handle this one,” Belmar said, when asked about those threats. “The only problem we’ll have if the KKK comes in is the hotels changing the bed sheets. They’re the biggest bunch of bed-wetters. Those guys are a bunch of punks.”