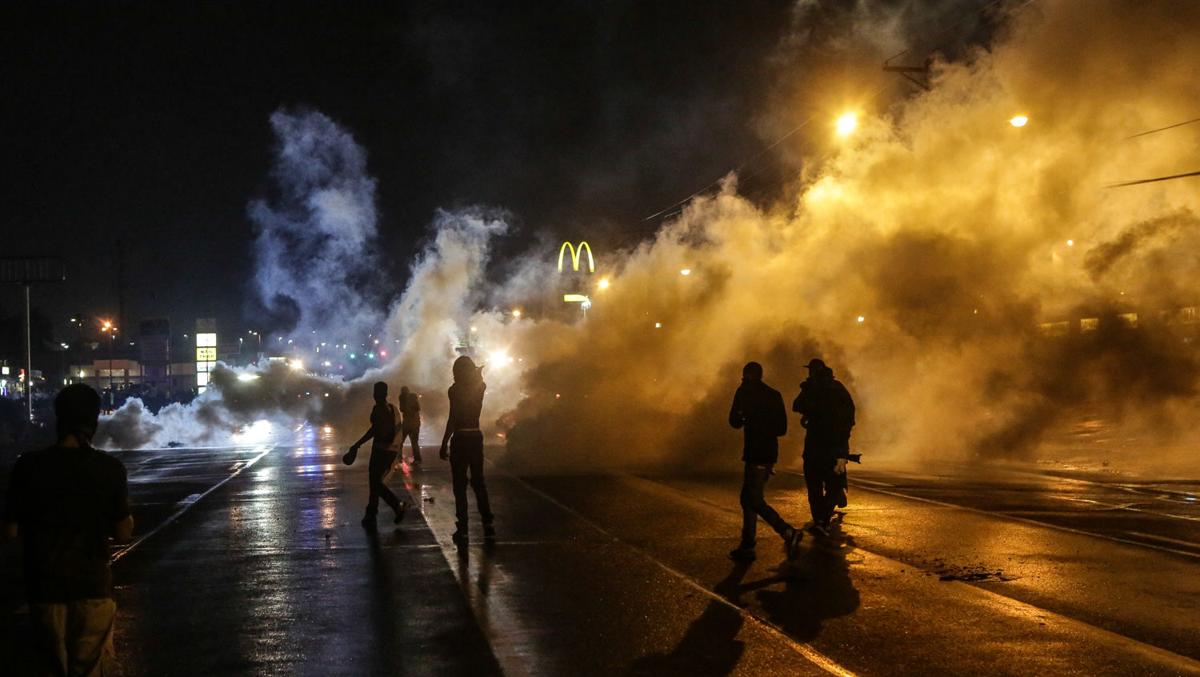 Protesting youth were stranded on the street after curfew when Missouri Gov. Jay Nixon declared a state of emergency and midnight-to-5 a.m. curfew in Ferguson. 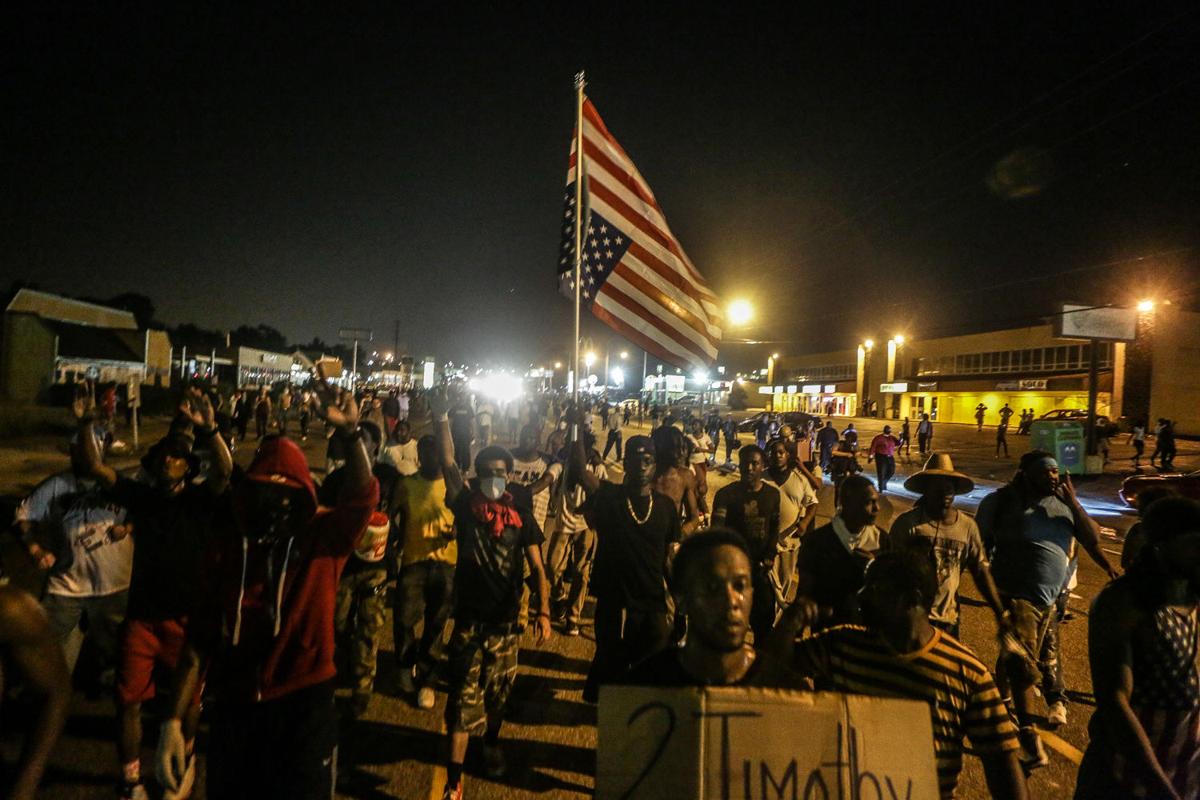 Protesting youth were stranded on the street after curfew when Missouri Gov. Jay Nixon declared a state of emergency and midnight-to-5 a.m. curfew in Ferguson.

“There is a passage in the scripture that says what the devil meant for bad,” said Pamela Meanes, “God allowed this mother to birth an angel to bring a face to police brutality.”

Her brief, poignant remarks during a rally in Brown’s memory at the Greater Grace Baptist Church on Sunday reflect the inspirational phenomenon that was birthed from this horrific tragedy.

For nearly two weeks the world has been tuned in to a small municipality of St. Louis County.

And yet before August 9, there were people born and raised in the greater St. Louis area who didn’t even know Ferguson existed.

When Darren Wilson shot Michael Brown dead on that Saturday afternoon in the Canfield Green Apartment Complex, all hell broke loose – and it has yet to subside.

The sad fact is that there is nothing new about an unarmed black man dying at the hands of law enforcement.

But with Brown’s death, push came to shove. And the community that witnessed it happen still refuses to stand down in their demand for justice.

Whether it was the way he was publicly shot and left to lie in the middle of the complex entrance for four hours, police and prosecutor ignoring the community’s demand for answers;, or a lack of respect for the family, the spirit of the Civil Rights Movement was resurrected on West Florissant Avenue and Canfield.

“Out of this has come the strangest bedfellows you can imagine,” said Stefan Bradley, associate professor of African-American studies at Saint Louis University. “Everybody has been forced into a coalition that they couldn’t have created themselves.”

The community took to the streets as a collective – from all backgrounds, ethnicities and walks of life – to say “enough!” and to show that they won’t be moved until justice is served.

There have been all sorts of sidebars – from the excessive force imposed on journalists from around the nation at the hands of the police, the violation of the rights of protesters, and the implication that Ferguson had long forsaken the majority of its residents.

Negative spins on the coverage have been prevalent as well.

Brown’s character was brought into question, thanks to the release of surveillance footage of Brown allegedly stealing cigars by the Ferguson Police – as they were announcing the name of the officer who fatally wounded Brown.

The vast majority of peaceful protests have included a small percentage of looters and outside agitators – who have been erroneously all lumped together.

“There is this whole narrative of these protesters being labeled as rioters – it speaks to the whole black criminality issue,” said Justin Hansford, a professor of law at St. Louis University. “When what you have is youth with courage who stood up and amplified their voices.”

A small percentage of violent incidents get the bold face print above the fold, but the most compelling story is the resilience and unification of the masses to fight for justice and challenge a flawed policing system that has antagonized blacks – black men, in particular – throughout the nation for decades.

“We are not looters, we are liberators,” Rev. Al Sharpton said to those in attendance at Greater Grace. “Ferguson and Michael Brown Jr. will be a defining moment on how this country deals with police and the rights of its citizens – and to address how police behave in this country.”

They’ve been forced out of school. They can’t go outside. They have watched their neighborhood become a battlefield where protesters stand against police. Some have even been caught in the crossfire while attempting to peacefully protest with their family.”

“There are lessons being taught,” said Donald M. Suggs, publisher and executive editor of The St. Louis American. “One of them is that it’s dangerous to be young and black and speak out. It’s as if the police reaction to these protesters is saying, ‘This is what happens when young African Americans amplify their voice.’”

And while Michael Brown’s death took the strained relationship between black men and police from the boiling point to explode before the eyes of the world, there is an opportunity in the wake of this tragedy.

The conversation around building better relationships between law enforcement and black citizens have taken center stage – as are the need to develop systems and policy for successful policing within the African-American community.

“You all ought to be thankful to the Brown family for Michael,” said Captain Ron Johnson, the Missouri Highway Patrol official charged with overseeing law enforcement operations in the midst of Ferguson’s unrest.  “Michael’s going to make it better for our sons.”

What happened to Micheal Brown is no doubt a tragedy. As a father of four I pray daily to not receive that type of news. But the reaction of the public is bothering me. Why do we pick and choose which horrific events we focus on, that we march and scream for justice? I have included a little story i found on the internet. Since I live just a couple of hours away I heard of the story. Justice was served in this case, but the reaction to this story was minimal at best. What is wrong with us?
You won't recognize me. My name was Antonio West and I was the 13-month old child who was shot at point blank range by two teens who were attempting to rob my mother, who was also shot. A Grand Jury of my mommy's peers from Brunswick GA determined the teens who murdered me will not face the death penalty...too bad I was given a death sentence for being innocent and defenseless.

My family made the mistake of being white in a 73% non-white neighborhood, but my murder was not ruled a Hate Crime. Nor did President Obama take so much as a single moment to acknowledge my murder.

There is not a white equivalent of Al Sharpton because if there was he would be declared racist, so there is no one rushing to Brunswick GA to demand justice for me. There is no White Panther party to put a bounty on the lives of those who murdered me. I have no voice, I have no representation and unlike those who shot me in the face while I sat innocently in my stroller - I no longer have my life.

So while you are seeking justice for Micheal Brown, please remember to seek justice for me too. Tell your friends about me, tell you families, get tee shirts with my face on them and make the world pay attention, just like you did for Micheal.