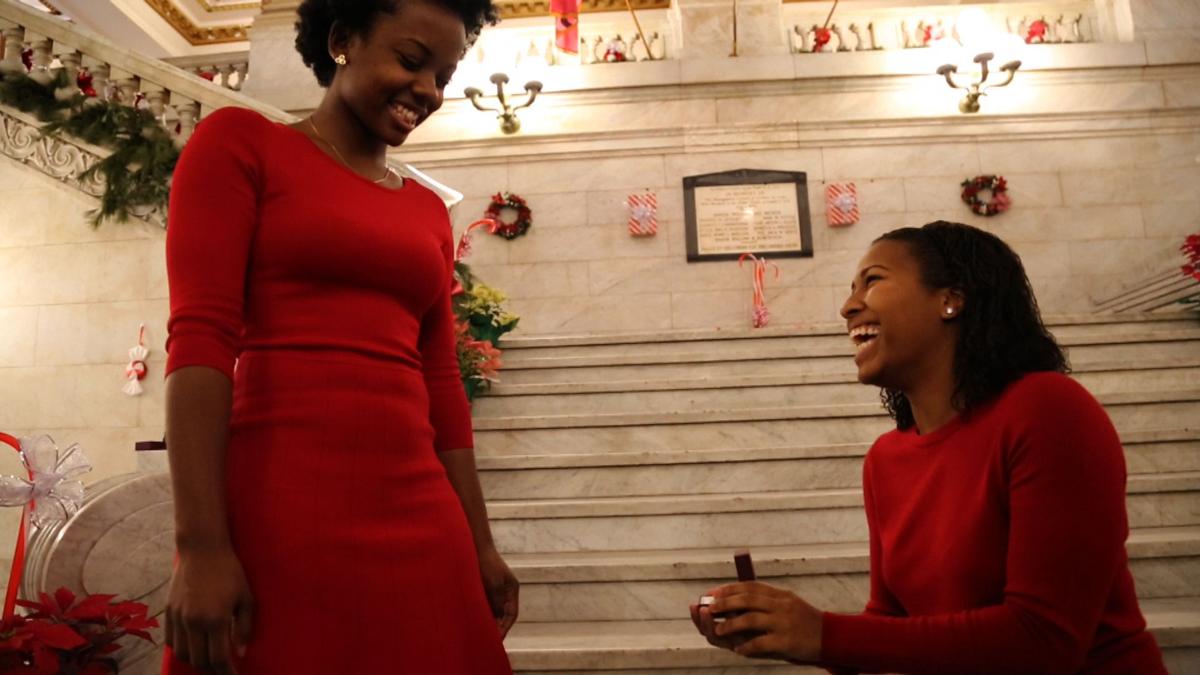 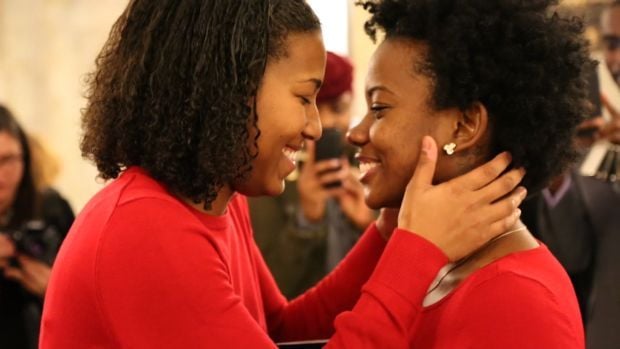 Ferguson protest leaders Alexis Templeton and Brittany Ferrell got engaged and registered to get married at St. Louis City Hall on Tuesday, December 16. 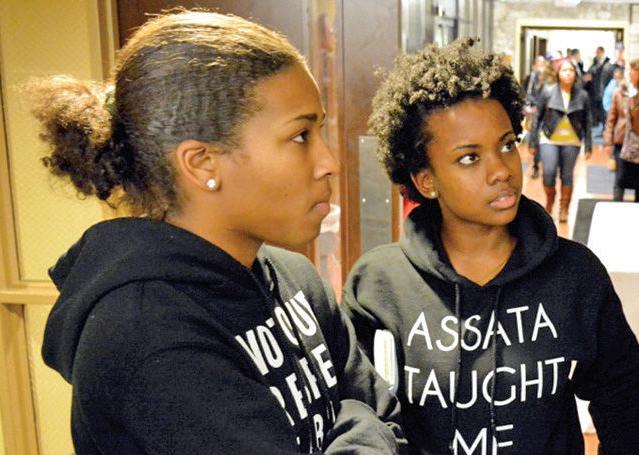 Ferguson protest leaders Alexis Templeton and Brittany Ferrell got engaged and registered to get married at St. Louis City Hall on Tuesday, December 16.

Ferguson protest leader Brittany Ferrell remembers the first time she saw Alexis Templeton step out of the car at the Ferguson Police Department in mid-August.

“She had on an UMSL shirt,” said Ferrell, 25. “I was like, ‘Oh, hey.’ I embraced her just because she was there. You hug people and you welcome them, especially in a time like that.”

From that moment, Templeton, 20, said it was if they had no choice but to be connected.

Both are Ferguson residents and University of Missouri – St. Louis students who chose to put school on hold after Michael Brown Jr.’s death and devote themselves to organizing against police brutality. They founded Millennial Activists United with Ashley Yates – all black women in their 20s – and have since become some of the most prominent faces and voices of the Ferguson movement.

In the midst the movement’s intensity, they fell in love.

On Tuesday, December 16 at about 2 p.m., Ferrell and Templeton arrived at St. Louis City Hall to get married – something that only became possible a month before in Missouri. On November 5, a state judge overturned Missouri’s constitutional ban on gay marriage. The Slay administration has been a strong advocate for marriage equality.

Surrounded by supporters on the marbles steps of City Hall’s rotunda, Templeton told the story. “Last night, we were sitting in the kitchen and she asked me, ‘Would you marry me?’ I said, ‘Absolutely. As a matter of fact, I’ll do it tomorrow.’”

Templeton added, “Since she’s made me happy for 130 days, I want to make her happy for the rest of my life.”

To a chorus of “awwws” and the flashing of cell phone cameras, Templeton got down on her knee and proposed officially to Ferrell.

“One hundred and thirty days ago, I fell in love with somebody and her six-year-old mini me,” Templeton said to Ferrell in her proposal. “I didn’t expect you to want to be with me … other than fight on the front lines with me. You have every single piece of my heart.”

They applied for and received their marriage license, which means they have 30 days to be married by an officiant or judge. Although several members of the clergy were present who could have led a ceremony that day, the couple decided to wait and plan a wedding.

“There’s going to be a lot of food, drinks, happiness,” Templeton said. “I’m going to be the DJ – music over the people,” referring to her Twitter handle @musicoverpeople.

After they received the license in the small office, the crowd chanted, “Black love matters.”

Throughout the event, police were speckled throughout the halls and entrances. They even asked activist DeRay Mckesson when he arrived if they were trying to shut down City Hall. He told them, “No.” It was just two people celebrating their love and trying to get married.

In fact, one of the supporters arrived carrying a sign that read, “All we want to do is take the chains off! (and put a ring on it.)” The sign references part of MAU’s mantra that is often chanted during protests, “We have nothing to lose but our chains.” Ferrell said part of MAU’s mantra is also to love and support each other.

Jamell Spann, a 21-year-old Ferguson resident whom the couple called their best man, has been friends with Templeton since before the day Ferguson Police Officer Darren Wilson shot and killed Brown on August 9.

“We came to this unspoken agreement that we wanted to be active in history and fight for the freedom for our people,” he said of Templeton.

Through continuously standing on the front lines, they also came into contact with Ferrell.

“Day in and day out, I’d lock arms with these two and stand in the face of quite literally tyranny and oppression, as they shoot rubber bullets at us, as they shoot tear gas at us,” he said. “It didn’t matter what the National Guard and the police threw at us. As long as we were together, we built power together and fed off each other’s love and energy.”

Spann said watching them grow as a couple and as a unit has been an awe-inspiring experience.

“It’s like watching poetry write itself,” he said. “Seeing them stimulate each other mentally. Seeing them bounce ideas off each other. Seeing them plan and plot such magnificent actions to further people’s consciousness, to wake people up. It gives me more than hope.”

As they walked out of City Hall, they laughed as Spann jumped up and down shouting, “Revolutionary love, love, love!” They all raised their fists to the air.