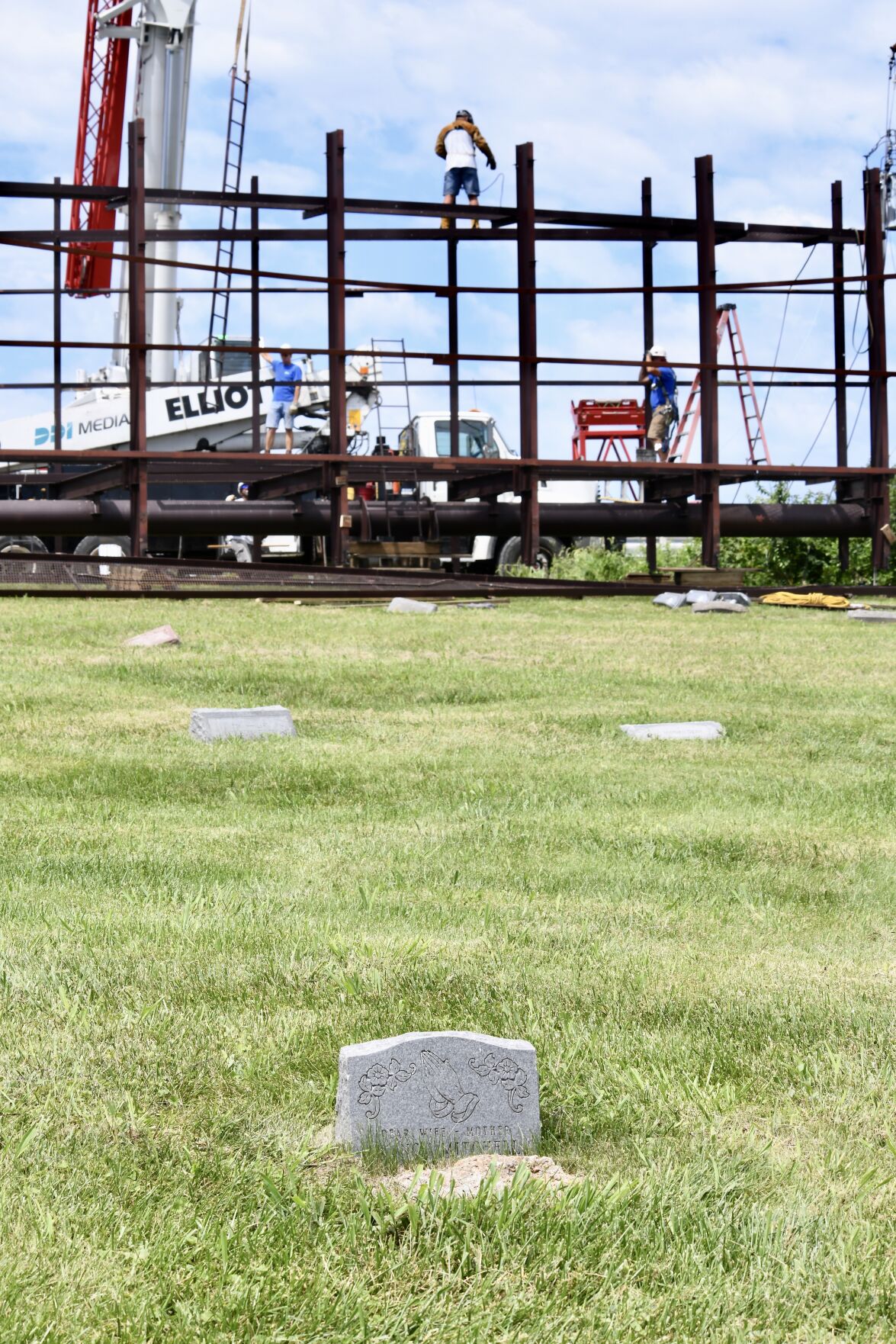 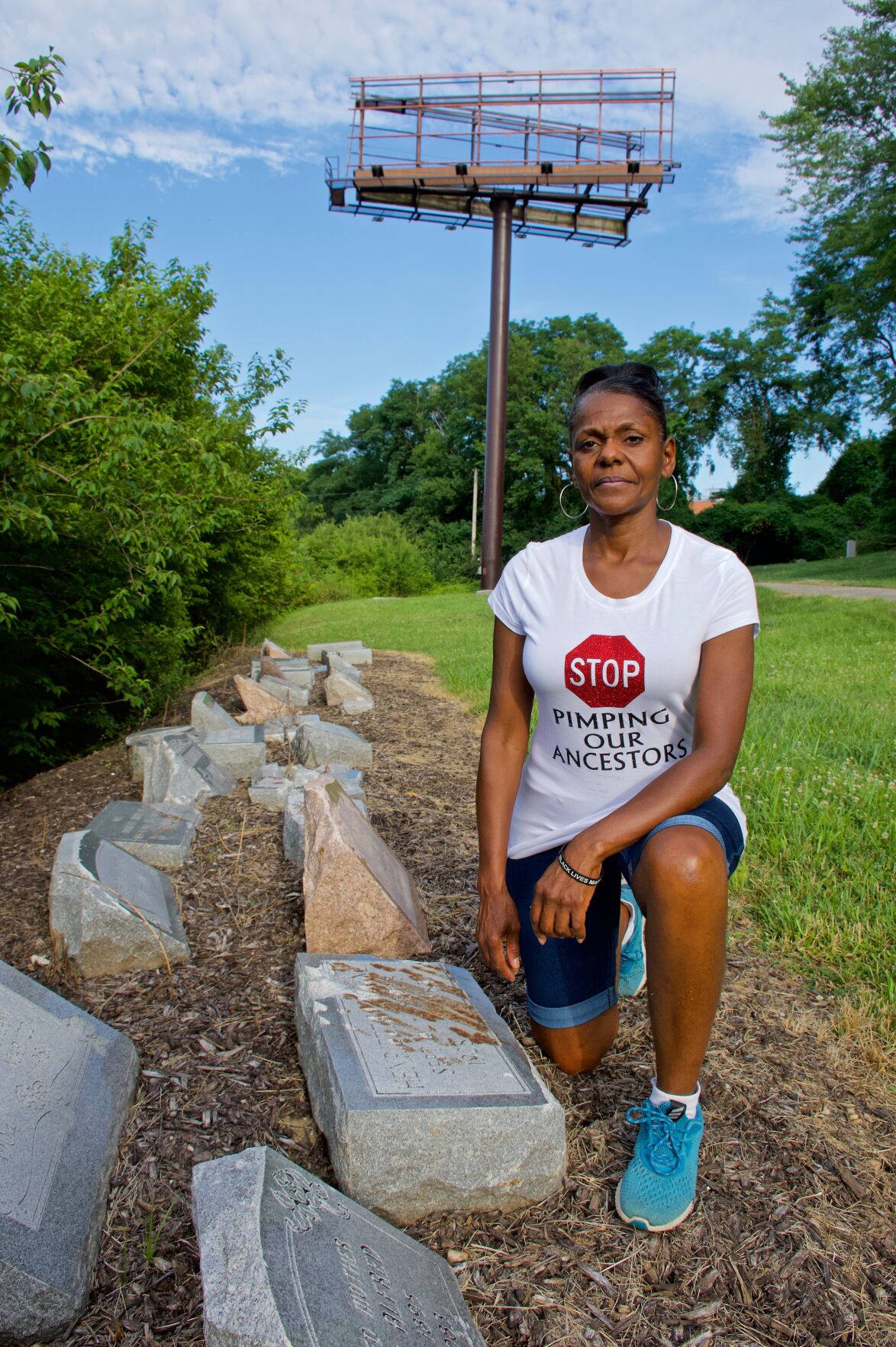 Activist Wanda Brandon, standing near headstones that were placed off to the side n Washington Park Cemetery so that land could be cleared for billboards owned by DDI Media.

UPDATED Aug. 19 – Mourners paying respects to their loved ones buried at Washington Park Cemetery have, since the 1980s, visited the historically Black cemetery under the shadow of 6 large advertisement billboards towering over the headstones. That is no longer the case.

On Monday, August 17, the billboard structures started coming down. This was pursuant to the settlement of a lawsuit that activist Wanda Brandon filed against the St. Louis-based outdoor advertising company DDI Media, which owns the billboards and the strip of land they stand on. The last of the three structures came down on August 19. On July 9, they had agreed that the billboards would be removed by December.

Brandon, 59, has been a cemetery cleanup volunteer since 2016, part of a small group that maintains the overgrown and decaying cemetery. Washington Park has fallen into disrepair since its days as what Brandon describes as “the most beautiful place African Americans could be buried” in the 1970s. It has passed through the hands of a series of owners who amassed back taxes while failing to maintain the property. DDI Media bought the strip of land along the highway, which abuts several graves, in 1985.

These days, the volunteers work to clear brush and prop up crumbling or overturned headstones, but have not until now been able to do anything about the billboards.

DDI Media, according to Brandon’s organization the Washington Park Cemetery Anti-Desecration League, agreed to remove the billboards “under the observation of a designee of the St. Louis County Office of Diversity, Equity and Inclusion.” They agreed this removal would be done “with little disturbances to graves.”

For Brandon, this project is personal: her mother, who died when she was 5 years old, is buried in the cemetery, as is her grandmother and several other relatives.

“It’s been a battle,” Brandon said. “So many people told me, ‘Oh, they ain’t going to do nothing about those billboards; that’s just the way it is. White people are gonna do what they do.’ But I never let that faze me.”

The billboards have carried fewer and fewer advertisements in recent months. Since mid-2018, the Washington Park Cemetery Anti-Desecration League has been sending letters to companies that had advertised on the billboards informing them where their ads were placed. Some groups whose advertisements had been placed there, such as the St. Louis Public Library and Blueprint4Summer, expressed concerns over the location of the billboards. At least one company ended up pulling their advertisement purchase altogether.

“The billboards disrupt the peace, beauty, serenity and noncommercial nature of the cemetery,” Brandon’s 2019 lawsuit said. “They defile and divest the cemetery of its sacred nature. The presence of the billboards serves no public interest and have no relation to, and are in conflict of, the purpose and use of the land as a cemetery.”

As such, Brandon and her attorney Mary Coffey argued for an injunction that would require all billboards to be removed from the cemetery on graveyard desecration grounds. In their lawsuit, they argued that regardless of who owns land in a cemetery, that land must legally be used for cemetery purposes.

“There is common law about cemeteries that says you can’t just decide that a cemetery’s not a cemetery anymore,” Coffey said.

Although the billboards were on DDI Media property and as such not part of Washington Park, it can still be legally construed as cemetery land, as there are undeniably headstones on the land the advertising company bought.

“Once it’s dedicated for use as a cemetery, it has to be preserved that way and the dignity of the place respected,” said Coffey. “So, it was our contention that the billboards were not consistent with the use of the property as a cemetery and were kind of disrespectful to the land’s dedication as a cemetery.”

Vince Miller, president of DDI Media, said in a statement to The American that his company had been involved in discussions with community members regarding the cemetery’s future for “many months,” and had made their own maintenance proposal for the future of the cemetery shortly before they were sued.

“While we had hoped to be part of the solution to address the long-term future of the cemetery, we are not willing to go through ongoing and costly litigation to help,” Miller wrote.

DDI media maintains possession of the contested portion of the cemetery now that the billboards have been removed.

Though the billboards are down, massive sections of the cemetery are still in disrepair – some covered in weeds too thick for a person to walk through. So, Brandon said, the Washington Park Cemetery Anti-Desecration League will continue its work to restore the cemetery to the beautiful resting place it once was.

Although the volunteers have worked diligently with the billboard issue and cleaning the cemetery, it disturbs me to see the head stones sitting over to the side. I personally saw that in 2 separate areas. Where she is standing in the picture is in the back part of the cemetery but there were also a group of head stones towards the front. I hope and pray they replace the head stones to its rightful place because it is very disturbing if they do not. In that case, the billboard issue is irrelevant.