Just before midnight on December 22, 2012, St. Louis City Officer Steven Pinkerton saw an African-American man at the Quiktrip parking lot, at 3410 South Kingshighway, and thought he was a robbery suspect, according to Pinkerton’s statement in the police report.

The man, 39-year-old Kerwin Harris, did not commit the robbery, police learned later, but he ran when Pinkerton pointed his gun at him and told him to raise his hands. Pinkerton, who is white, tackled Harris and used a chokehold until Harris went limb because he feared for his life, Pinkerton stated in the police report, though chokeholds were banned. Two other white officers, also stating they feared for their lives, tased Harris six times in order to “get him to comply” and then handcuffed him, according to the police report. Harris was pronounced dead at 12:38 a.m. on Dec. 23, 2012.

Sgt. Keith Barrett of the St. Louis Metropolitan Police Department said, “There is an ongoing investigation being conducted by the Internal Affairs Division; however, we do not have any details to provide.”

The details of this case were included in a report released today by the Ethical Society of Police (ESOP) — though Pinkerton was not named. The 60-page report outlines the alleged practice of systemic racism within the police department and makes suggestions for reforms in the City of St. Louis.

“The murder of George Floyd on May 25, 2020 caused America to grapple with police reform and what that looks like in various communities,” the report states. “In St. Louis City and County, structural and blatant acts of racism and corruption have had unparalleled harm on civilian and uniformed minorities.”

On June 15, Pinkerton made a social media post about George Floyd and neck restraints, and he was placed on paid desk duty, according to ESOP’s report, though again Pinkerton was not directly named. Barrett said the investigation into the post is ongoing. The American requested a comment from Pinkerton through the St. Louis Police Officers Association (SLPOA), and his comment will be added if received.

It took until this moment, in the midst of a national movement for racial justice, for Pinkerton’s social media posts to have even the potential of repercussions — eight years after he used a chokehold in an arrest that ended with a man dying.

Pinkerton has been reported multiple times for posting demeaning, racist comments about the black community, the report states. In a Facebook post, Pinkerton once wrote, “Black people are pathetic. You don’t want to be treated equally, you want favored treatment. And you wonder why there is so much animus toward you?” 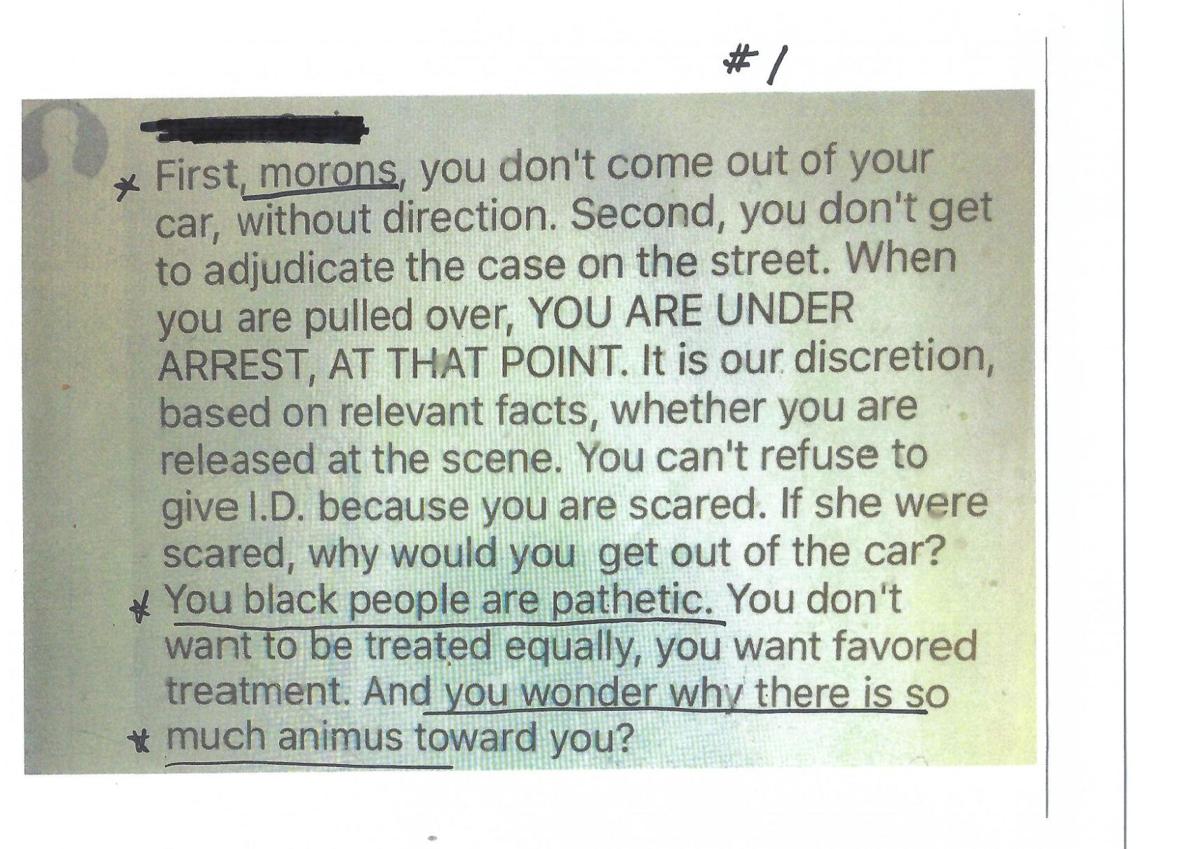 Heather Taylor, president of ESOP and a city homicide detective, was the scene supervisor for Harris’ case.

“I had questions about it then,” she said. “And I have them now.”

The officers were never charged or disciplined, according to ESOP’s report, and Pinkerton is still employed at the department, police said.

“Like so many other cases, this case is incredibly tragic, leaving families to pick up the pieces after officers have killed their loved ones under the ‘color of law,’” the report states. “In this case, the officers were allowed to violate policy and hide behind being in fear of their lives while killing an unarmed man.”

ESOP’s report calls for all current and prior cases where death has occurred during a use of force incident to be reviewed by a grand jury. These cases should be co-investigated with the Civilian Oversight Board and the Circuit Attorney’s Office, it states.

‘Not just one thing’

The Ethical Society of Police was founded in 1972 by African American police officers to fight racism in SLMPD and the community. The authors and contributors of the ESOP report are current officers, former law enforcement officers and civilians with the city’s police department.

A major contributing factor to police long-standing issues with racism and inequities stems from the police department never fully being incorporated into the Civil Service system, the report states.

The St. Louis Fire Department has parity in pay with the police department, it states, but the firefighters are still bound by the civil service rules like other city workers — though their disciplinary process is tailored to their line of work. However, even after the city gained local control of the police department in 2013, police officers didn’t come under those civil service rules, and they need to, it states.

“By allowing SLMPD to function as a half city department and half independent organization with rules that conflict with Article XVIII of the Charter, the City has created a system that allows individual decisions to rule instead of consistent rules similar to other city employees,” the report states. “This has also hindered community support, harmed the retention of African American officers, impeded the promotion of African American officers, has allowed unfair discipline, emboldened employee corruption, lowered morale among employees, and resulted in numerous civil lawsuits.”

And then, there is the issue of the St. Louis Police Officers Association and its collective bargaining agreement with the city. That agreement expired in June, and Director of Personnel Richard Frank has not renewed it.

“The SLPOA has become more emboldened with protecting corrupt, violent, bigoted, and sometimes racist officers,” it states. “Officers of all races not held accountable for their actions have cost taxpayers millions of dollars. The actions of these officers will have a financial strain on taxpayers in the City of St. Louis for decades to come.”

In 2016, SLMPD and the City of St. Louis settled $4.7 million dollars in lawsuits dating as far back as 2011, ESOP’s report states, and those numbers increased as more lawsuits were discreetly settled. In 2017, there were numerous reports of excessive force by city officers during the Jason Stockley protests.

“After disturbing examples of outright police brutality and corruption were exposed, the St. Louis City Counselor's Office increased its budget by 110% to cover lawsuit payouts in 2018,” it states. “The budget was $2 million before the Jason Stockley protest, and increased to nearly $4 million dollars.”

Nearly 350 SLMPD officers were named in a class-action lawsuit for an unlawful “kettling” technique, excessive use of force, and illegal arrests from 2017, it states. “The class-action lawsuit has yet to be settled and will likely surpass the $4 million budget,” according to the report.

The report lists 25 recommendations which include creating a trauma-informed form that will let families know what their rights are when their loved one is killed by law enforcement. The form should include a summary of the incident, the medical examiner’s findings and the police report.

It also states that the Department of Personnel must mandate the hiring of social workers to assist divisions with juvenile disturbances, domestic violence calls, unhoused/homeless services, and mental health calls. They also recommend stronger protection for whistleblowers in the department, more sustainable community outreach efforts, a standardized matrix for hiring and disciplining employees, among many other things.

“It’s a lot of systemic racism,” Taylor said. “There are a lot of old and antiquated ways that are the problem. It’s not just one thing.”