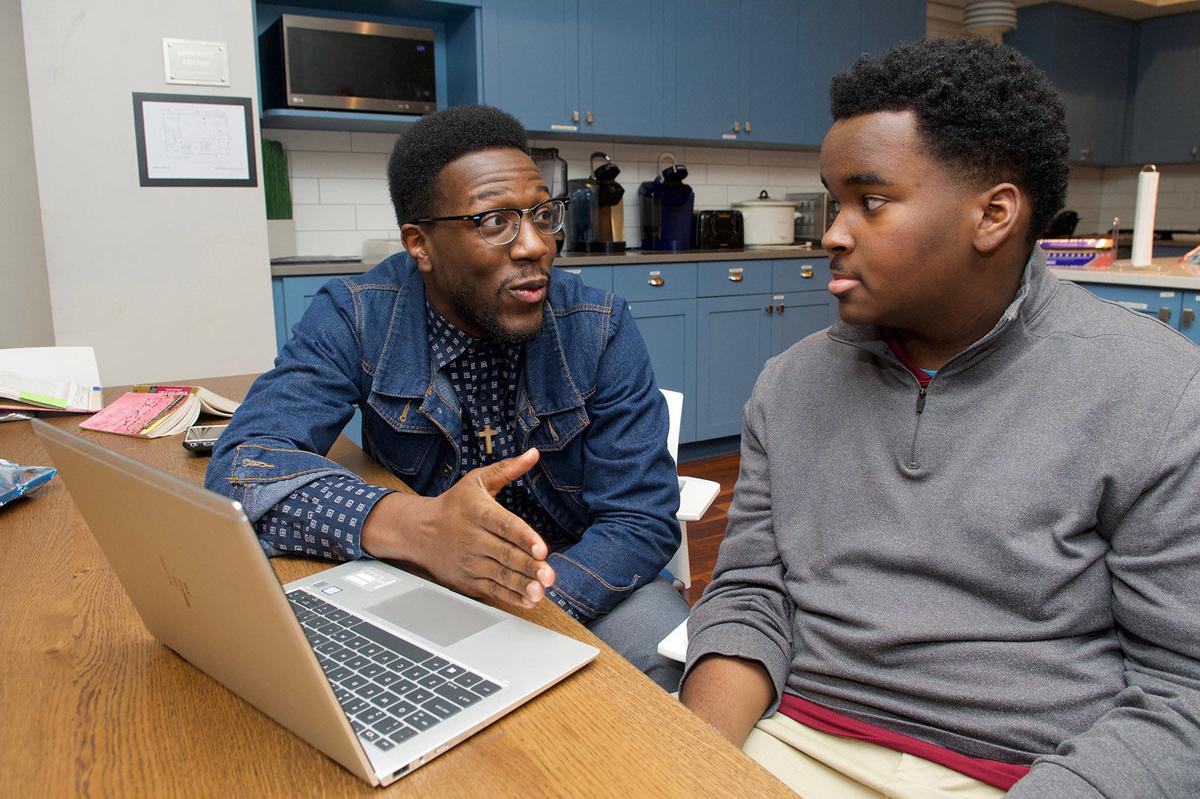 Seth Akakpo-Lado, a former resident at Boys Hope Girls Hope house in Richmond Heights, explained a math concept to resident scholar Zion , 15, at the house on January 27. A native of Togo, Akakpo-Lado went on to graduate from Washington University and now works as a patient experience specialist at an ocular surgery clinic. 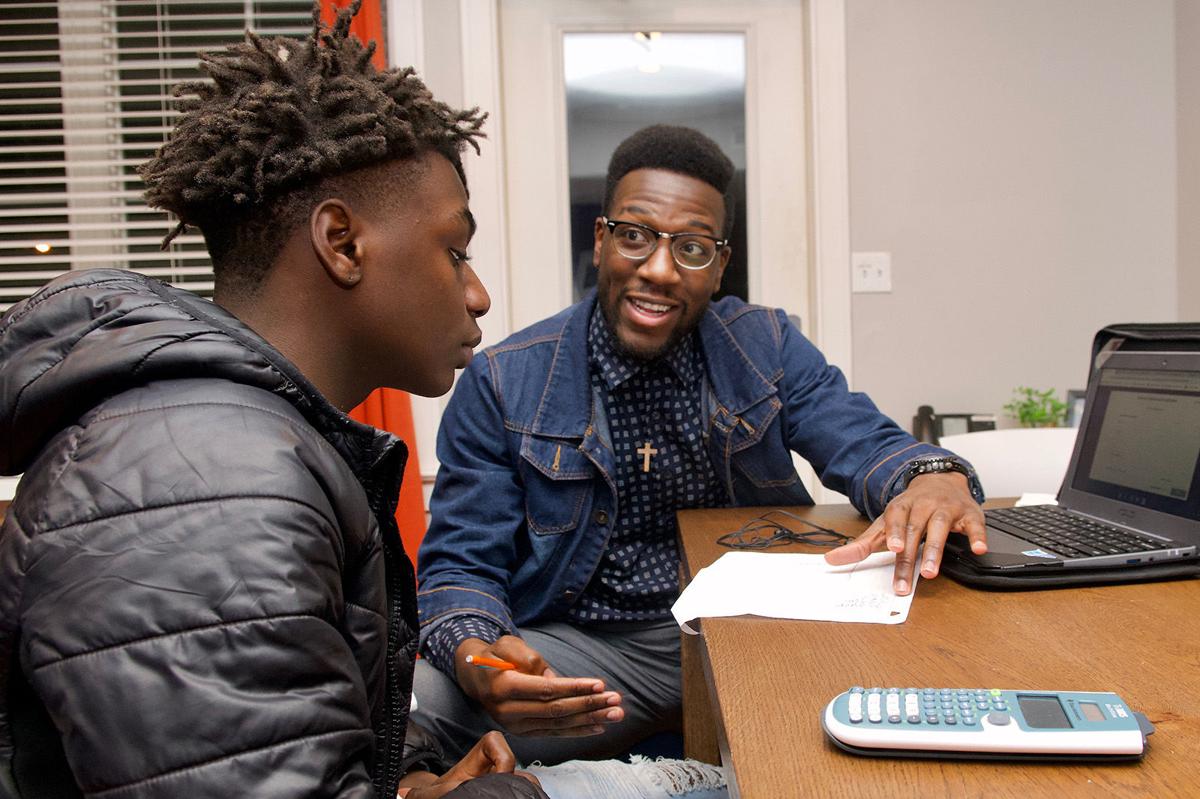 When Seth Akakpo-Lado began the 6th grade at Herzog Elementary School, he had just immigrated from Togo, West Africa and spoke no English, so he was put into the third grade instead. His teachers quickly realized that he was a fast learner, though, especially when he started finishing all his work early, despite not having learned English fluently.

“I would breeze through my assignments and then go to the library or just walk around the school,” Akakpo-Lado said. “And they couldn’t really tell me not to, because then I would pretend that I didn’t understand them!”

He became close to office staff members and helped them out with various tasks. Soon, Akakpo-Lado’s teachers redirected some of his energy towards holding a French tutoring workshop for the other students in the afternoons.

The principal of Herzog Elementary had a sister who volunteered with Boys Hope Girls Hope, a nonprofit that for 42 years has provided a residential educational program for students from economically challenged backgrounds. Akakpo-Lado, the principal at Herzog knew, would benefit from the faster-paced living environment that Boys Hope Girls Hope would provide.

Within two years, Akakpo-Lado had moved in to the Boys Hope Girls Hope house in Richmond Heights, where he would live as part of a cohort of 10 boys and 10 girls for the next seven years. He studied in Incarnate Word Parish schools in Chesterfield before and then at Washington University.

Today, Akakpo-Lado is still heavily involved at Boys Hope Girls Hope. He serves as a tutor, mostly in math, and also gives the students life advice about topics like religion.

“It’s been a fun and winding road, but now I’ve come back,” he said. “I stop by once a week, usually on Thursdays, to tutor in various subjects and just to kind of still be present as a mentor if they need someone to chat with who’s been through the experience.”

He often advises them on what it’s like to be a child from a Protestant background going to Catholic school, as most of the children at Boys Hope Girls Hope are. Boys Hope Girls Hope sends students to DeSmet, St. Joseph’s Academy, Loyola Academy, SLU High, and other Catholic schools, along with its local school district, Maplewood-Richmond Heights.

“For a lot of these kids, that’s not their background, so they struggle with that,” he said.

As Boys Hope Girls Hope requires students to spend most of their time away from their families starting as early as fourth grade, maintaining a familial atmosphere is critical to the program’s success, Akakpo-Lado said.

“Although Boys Hope Girls Hope kind of disrupts the traditional family environment, they try vehemently to maintain a sense of normalcy for the scholars,” he said. “They’ll have an established time when all of the boys and all of the girls will come and eat dinner together and share about their days. They’ll have that kind of established routine.”

The boys all live in one house, and the girls in another. Each student shares a room and bathroom with one roommate, making use of spacious common areas. “The boys I lived with, they became my brothers,” Akakpo-Lado said.

Boys Hope Girls Hope tries to keep the students’ connection with their families strong. Students go home for a weekend every month, as well as for holidays, and there is no limit on parents visiting the school. Akakpo-Lado said he visits his two younger siblings “at least every week,” as they follow in his footsteps at Boys Hope Girls Hope. Some parents visit every few days for dinner.

“I admire our parents,” Executive Director Cassandra Sissom said. “It’s a sacrifice. Trusting us to take the lead on some things and not see your child every day, and trust that we’re going to protect them and love them and care for them – that’s an amazing feat.”

Once students leave Boys Hope Girls Hope for college – 100 percent of its scholars pursue some kind of post-secondary education – the program continues to provide them support. There are currently 32 alumni in college, according to Sissom.

Akakpo-Lado credited Boys Hope Girls Hope with his preparedness to take on the challenge of four years at Washington University.

“We learn routines about sharing space, the kind of things that you have to learn, especially when it comes to college, where you have to work around a roommate and come up with an agreement about how to live together in a civil way,” he said.

“I went into college already knowing how to do a lot of the things that college required of me, to the point where I was helping my fellow college students because they were still pretty new to it.”

Now, Akakpo-Lado works as a patient experience specialist at an ocular surgery clinic. “My role specifically is to build a connection with all of our patients, and to make them feel at ease about their surgical process,” he said. He learned these skills at Boys Hope Girls Hope.

He had been “bouncing around these three cultural groups” – white, African-American and African – “and being the one person that never really belonged anywhere,” he said, when “Boys Hope Girls Hope kind of taught me the value of embracing that.”

This helps him at work with patients at the ocular clinic – and in the community.

“A lot of the kids in West County, they didn’t know what life in North County and Ferguson was like and had some vast misunderstandings. I became an advocate for white people sometimes, where I’d be the kid who went to DeSmet around my friends from North County or my African friends. I never belonged, but that became the one thing that pushed me to be a voice.”