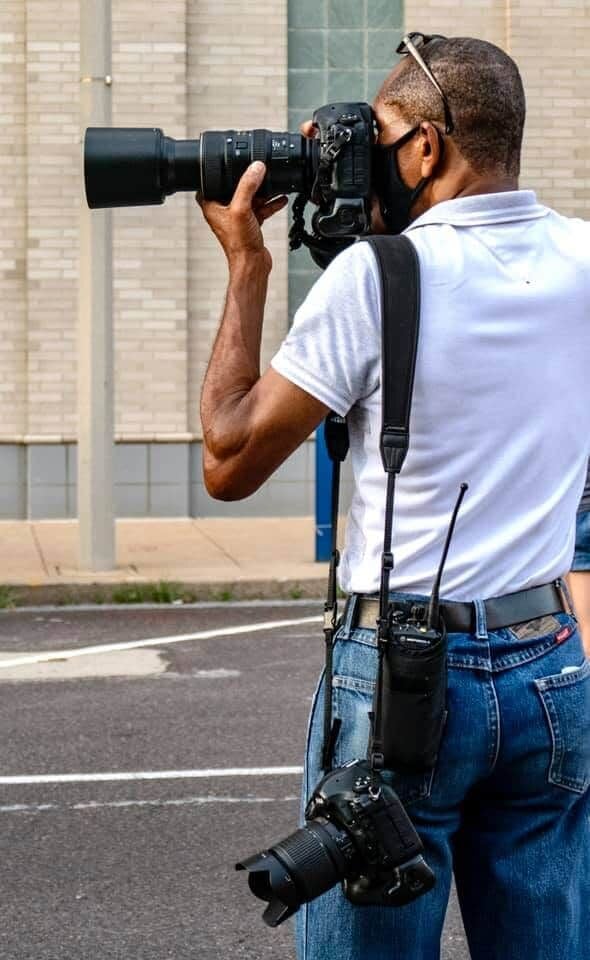 Wiley Price masked up while capturing a socially distant shot 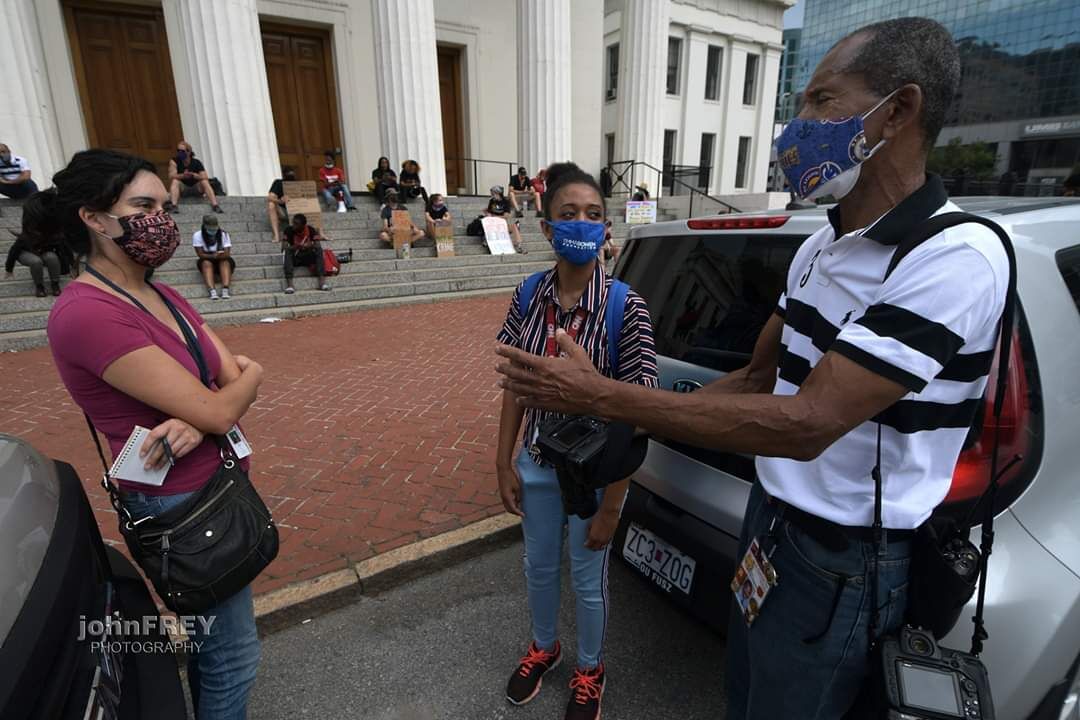 Wiley Price speaking with journalists during a protest outside the Old Courthouse in June.

For more than 40 years, Wiley Price has been documenting Black St. Louis history in real time. Experience has given him a keen sense of knowing which frames from his constant companions – a pair of Nikon cameras that typically dangle from each shoulder – will have significance.

He’s seen it all. And has the photos to prove it. But nothing could have prepared him for how the logistics of his life’s work would change due to a global pandemic.

“I knew I would have to be out there,” Price said. “Because the role of The St. Louis American – and what the community has come to expect from us – is to tell our story within the story. In order to tell that story, the stay-at-home orders that we were given couldn’t possibly apply to me.”

In mid-March, he started self-deploying by driving across busy intersections and through historically Black neighborhoods to photograph residents in their environments.

“When you are a photographer, your job is to be on site,” Price said. “You can’t take a picture through a phone. There is no way around it. I’m not a portrait photographer or someone who shoots objects on a table. I shoot people for a living. When is the last time I took a picture and somebody wasn’t in it?”

He wanted to use his photographs to counter the narrative that Black people weren’t taking the pandemic seriously. He anticipated taking pictures of people with masks and gloves on walking down the street, at bus stops and going about their day-to-day routines in full protective gear. Instead, the busy streets usually known for hustle and bustle were like dirt roads in ghost towns.

“That first day when they really asked everybody to stay home, I was driving down Tucker into downtown from the South Side,” Price said. “It felt like it was Sunday morning, and it was a weekday.”

That’s when it hit Price that he was about to document history yet again.

“It was like, ‘This is really happening,’” Price said. “I have never used Grand or Kingshighway as much as since COVID happened, because there had been nobody in the streets. And every day those first few weeks felt like a major holiday on Highway 40.”

Initially, the Black people he saw that were brave enough to come outside were reckless enough to not cover up.

“That first month was a struggle,” Price said, even though he was relentless enough to consistently give people a visual of the new normal in response to COVID-19.

The turning point came one afternoon when he was riding through the Ville. He saw a teenager sitting on a wall with a mask on maneuvering his cell phone with blue surgical gloves.

“It was about the time when older black people started to rumble about younger black people not taking this seriously,” Price said. “I ran across this kid. He might have been 16 years old and went to Sumner. I practically wrecked my car to swing back around a whole city block to find this kid again to get this picture.”

The boy admitted to Price that his classmates and friends had been teasing him about his masks and gloves. “He told me, ‘I really think we need to do this,’” Price said. “I said, ‘You are right – and you are a special kind of person.’” He submitted the photo in the hopes that other young people would see the teen and follow suit.

“That was my whole point in going out every day early on,” Price said.

He wanted to let people know this is something they need to be taking seriously by showing other people doing what they need to do to protect themselves from the virus as they went about their daily lives.

“I felt like a medical worker in that way,” Price said. “Like my job is to be there with the people – no matter what – and to help build awareness, but through photos.”

He tries to stay as safe as he possibly can while on assignments, but Price knows that there are no guarantees.

“And at 64, I’m not fooling myself,” Price said. “I’m in good physical shape to be 64. But I’ve never said to myself, ‘I don’t think you can catch this.’ This thing really scares me, because this is not about being in shape. You can’t fight off the virus just by being in shape. The virus is what it is – and it will come and get you.”

He took the COVID-19 test back in May; it came back negative. But when it comes to human contact, he operates as if he could be carrying the virus. Price wears two masks, carries hand sanitizer in the gear belt that holds his spare lenses and batteries, and washes his hands incessantly throughout the day.

“I am truly convinced that this virus can reach anyone,” Price said. He has disinfectant spray in his car and every time he gets in, he sprays his hands and wipes them down.

Price will be taking another COVID-19 test next week.

Precautions as he continues to go out and shoot have come at a cost to his family life. “I told my sons that I won’t be seeing the grandkids for a while,” Price said. He has only seen his three grandchildren once in nearly five months. He stopped by recently when the family celebrated his youngest grandson’s first birthday with a socially distant party.

His 10-year-old grandson came running up to him. When the boy got within an arm’s length, Price stepped back. “Paw-paw, I can’t have a hug?” his grandson asked, according to Price. “I said, ‘I’m sorry, Trent, but I have to be socially distant.’”

It broke his heart to reject the physical affection of his grandson, but even the thought of infecting his grandson felt far worse.

“I would be blaming myself for that,” Price said. “Because I know as much as I am everywhere all the time for work, he would have caught it from me. I take it very seriously.”

Those aware of his service to the Black community through his profession have voiced their concern for him.

“Every day, somebody says to me, ‘Please be careful out there because you are always out,’” Price said. “Even strangers, come up and say, ‘I don’t know you, but I see you all the time. Please be careful.’”

Price feels like this is the community’s way expressing how much they value his work and The American as a news organization that constantly advocates for them.

“That is uplifting for me,” Price said, “because the people who truly get what I do know that right now I’m walking around in harm’s way.”

But it is something he deems necessary.

“This is exactly the time when we need these pictures most to say, ‘This is what happened in the Black community during this historic time,’” Price said. “To say, ‘This is what we are trying to do to right now to better ourselves and make things better for our community.’ And I consider it a badge of honor to be able to say, ‘I was right there.’”