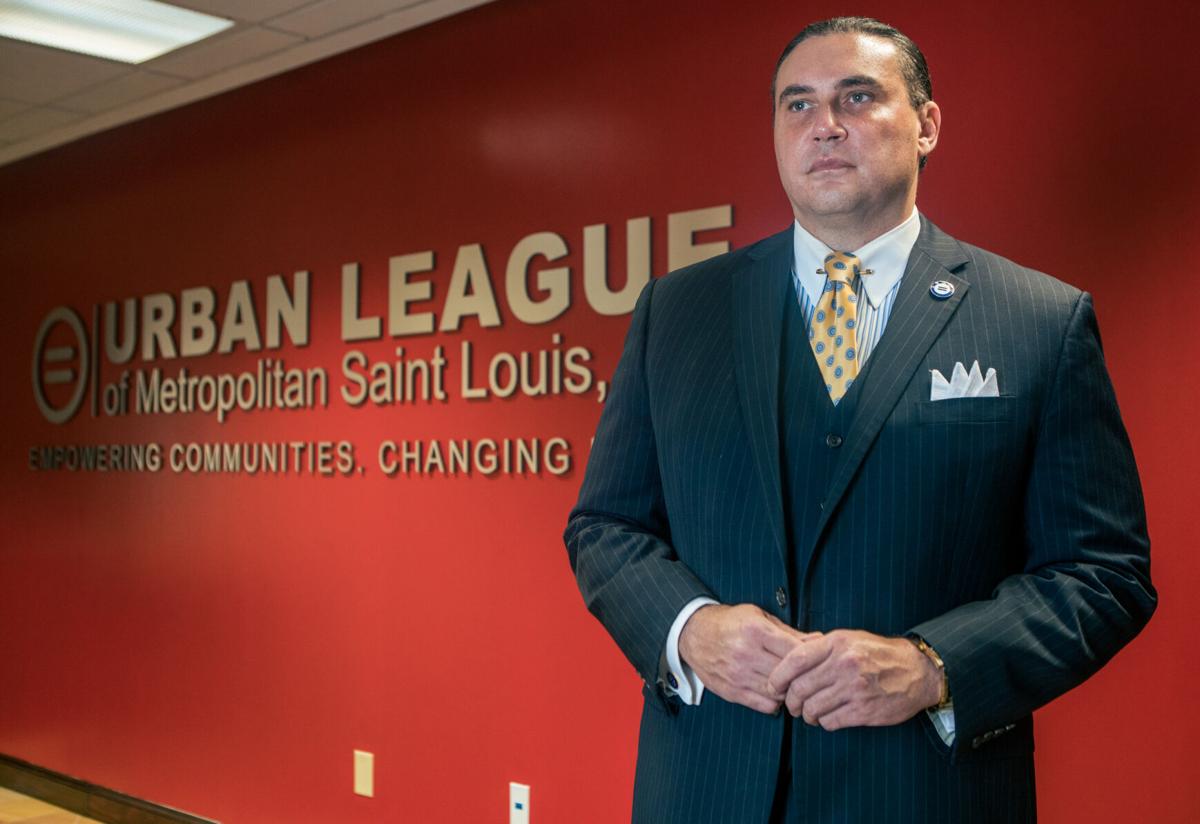 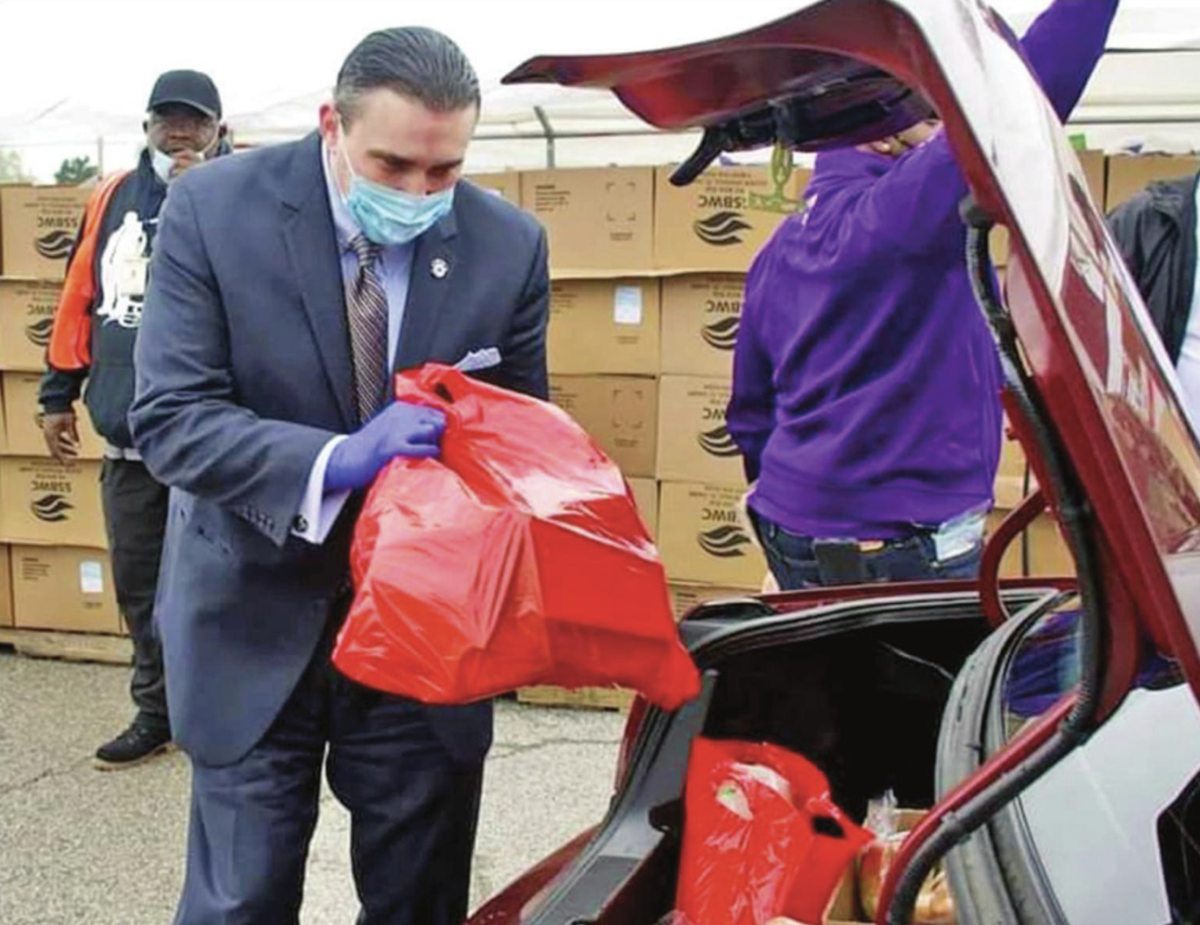 Michael P. McMillan, President and CEO of the Urban League of Metropolitan St. Louis, loaded one of 1,500 packages that included food, toiletries, masks and helpful safety information. They were distributed to the people of East St. Louis and St. Clair County during a drive-thre giveaway at East St. Louis High School on April 17, 2020. 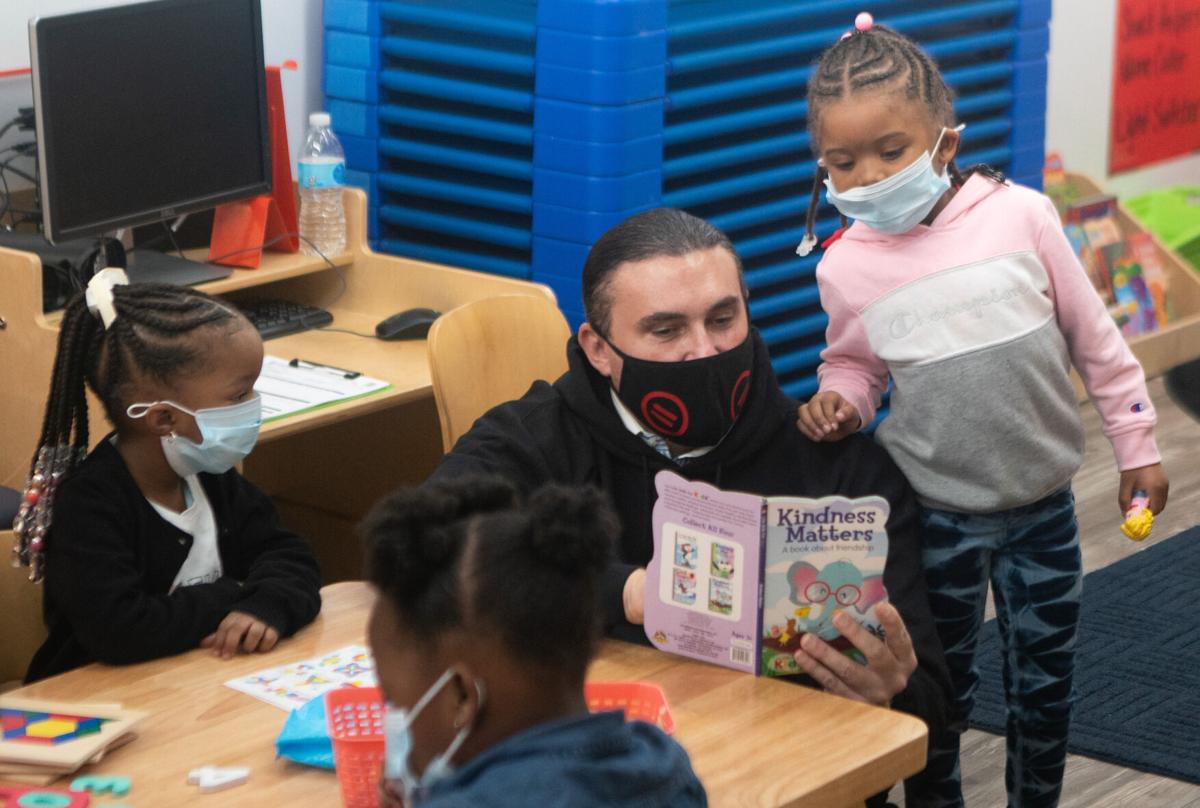 During the Urban League’s recent Christmas food distribution event, lines upon lines of masked and yellow-safety-vested volunteers stood ready to pile boxes full of food and personal protective equipment into the propped-open trunks of the cars snaking around the parking lot.

This event came on the heels of 23 consecutive weeks of food distribution the Urban League ran between April and October of this year, giving out food to “around 85,000 families,” according to Patricia Washington, the Urban League’s vice president of communications.

The man behind this massive effort is Michael P. McMillan, president and CEO of the Urban League of Metropolitan St. Louis. McMillan raised close to $4 million dollars this year toward coronavirus relief, as well as mobilizing corporate and individual volunteers for the food distribution projects.

"It was Michael's amazing individual effort in response to the ravages of the COVID-19 pandemic that made him the unanimous choice as the St. Louis American's 2020 Person of the Year," stated Donald M. Suggs, St. Louis American Publisher and Executive Editor. "His prompt organizing and mobilizing of the right people on his Urban League team and beyond into the larger civic community enabled an immediate large scale response that benefited tens of thousands across the St. Louis region. A passionate, tireless servant leader, he used all of his management skills and personal and professional contacts to extend the invaluable program for weeks and weeks."

As he put it in a recent opinion piece for this paper, “We have provided more than $3.75 million in food to over 85,000 families and distributed more than 300,000 masks, gloves, sanitizer and other protective gear to help stem the virus’ spread.”

“I have never seen anything like this,” Washington said. “People are crying as they come through those lines. Tears flowing. Because they’re so grateful that there’s one less thing they have to worry about this week, and that’s putting food on the table.

Said Kathy Osborn, executive director of the St. Louis Regional Business Council,“I don’t know how Michael and his team did it. But he was able to really mobilize his team and neighborhood volunteers to be able to serve something like 3,500 people in their cars every Saturday.

“He’s just a dedicated person ... there is no off time for Michael McMillan.”

McMillan was not just able to bring together monetary donations, but to convince hundreds of volunteers to put in high-risk hours distributing food.

“To my surprise, in many ways, members in these companies put themselves in harm’s way by going out and volunteering as part of the food drive,” Osborn said. “Not only putting their money into it, but they actually volunteered.”

The COVID-19 pandemic has presented new challenges to a social services system already strained almost to the breaking point: “hundreds and hundreds” of families who had never needed assistance with food before February, according to Washington, suddenly needed that assistance.

And the Urban League’s other work — organizing jobs programs, assisting people with utilities, and other safety net programs — also had to adapt to the conditions of pandemic, which is particularly difficult given that many of the impoverished people that the Urban League serves may not have reliable access to the internet.

“It’s really heightened for us the reality of the digital divide,” Washington said, pointing out that if a home has limited WiFi and that internet bandwidth is already being used for, say, virtual school, the adults in the home cannot then use the internet to figure out how they will keep the lights on in the upcoming month.

Despite these challenges, McMillan has been able to lead the Urban League of St. Louis to continue growing the services it offers: wrapping up construction on its new, $20 million headquarters this month, as well as launching an employment partnership with the Anheuser-Busch foundation.

The Urban League has a history of dealing with crisis: their website notes that “St. Louis operations date back to 1918, when we began with the mission of stabilizing conditions for African Americans as a result of the negative impacts of the East St. Louis race riots.”

Now, the hundreds of people who staff 15 locations and 50 programs continue to strive toward equity in the midst of crisis.

As the pandemic continues, another parallel ‘epidemic’ in St. Louis has not let up: that of the high rates of poverty and its attending violence in this city.

McMillan, who has served with the Urban League of Metropolitan St. Louis since 2013, has consistently focused on tackling these issues.

He established the Save our Sons program during the chaos of the Ferguson uprising in 2014; a workforce training program for young African American men, which has since expanded to include a downtown location as well as its initial north St. Louis County location.

Seventy five percent of the people entering the program are fathers, and half have felony convictions. Here, again, McMillan’s ability to motivate and mobilize others shines through.

As Osborn put it, the men (and now, women) who go through the program trust McMillan, because “when he says he’s going to do something he will do it ... he treats people with tremendous respect. And I think people see that and they respond to it.”

In the upcoming months, McMillan’s ability to fundraise, mobilize and bring people together will continue to be tested, as government funding for pandemic response evaporates because the jobs, homes and security erased by COVID-19 have not come back.

As McMillan put it in a recent interview with the St. Louis Post-Dispatch, “It’s a family collective effort just to try to keep everyone afloat and try to get everyone through this … but we keep forging ahead.”

Washington agreed. “We are now trying to find the money … because the need has not let up. All that’s going to have to be organized again. Because what we’re going to see in December, January, February, is more of the same.”

For his constant work to bring St. Louis together in a time of crisis, The St. Louis American celebrates Michael McMillan as the 2020 Person of the Year.