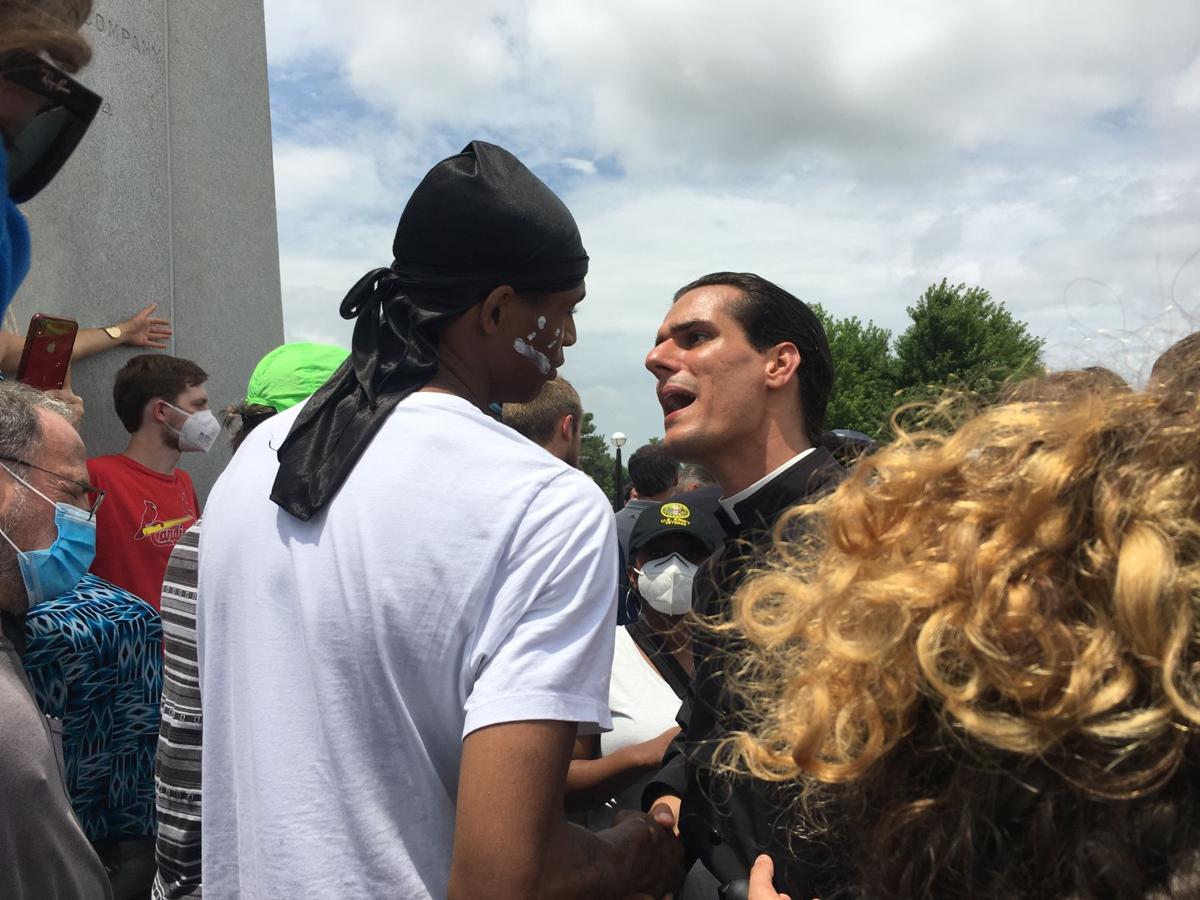 Veteran protestor Low-Key engaged in conversation with a Catholic priest from opposing sides of a demonstration, Some groups, including representatives of the Catholic Church, rallied to defend the statue of King Louis IX. While protestors, citing his history of racism, Antisemitism and Islamophobia, demanded that the statue be removed. 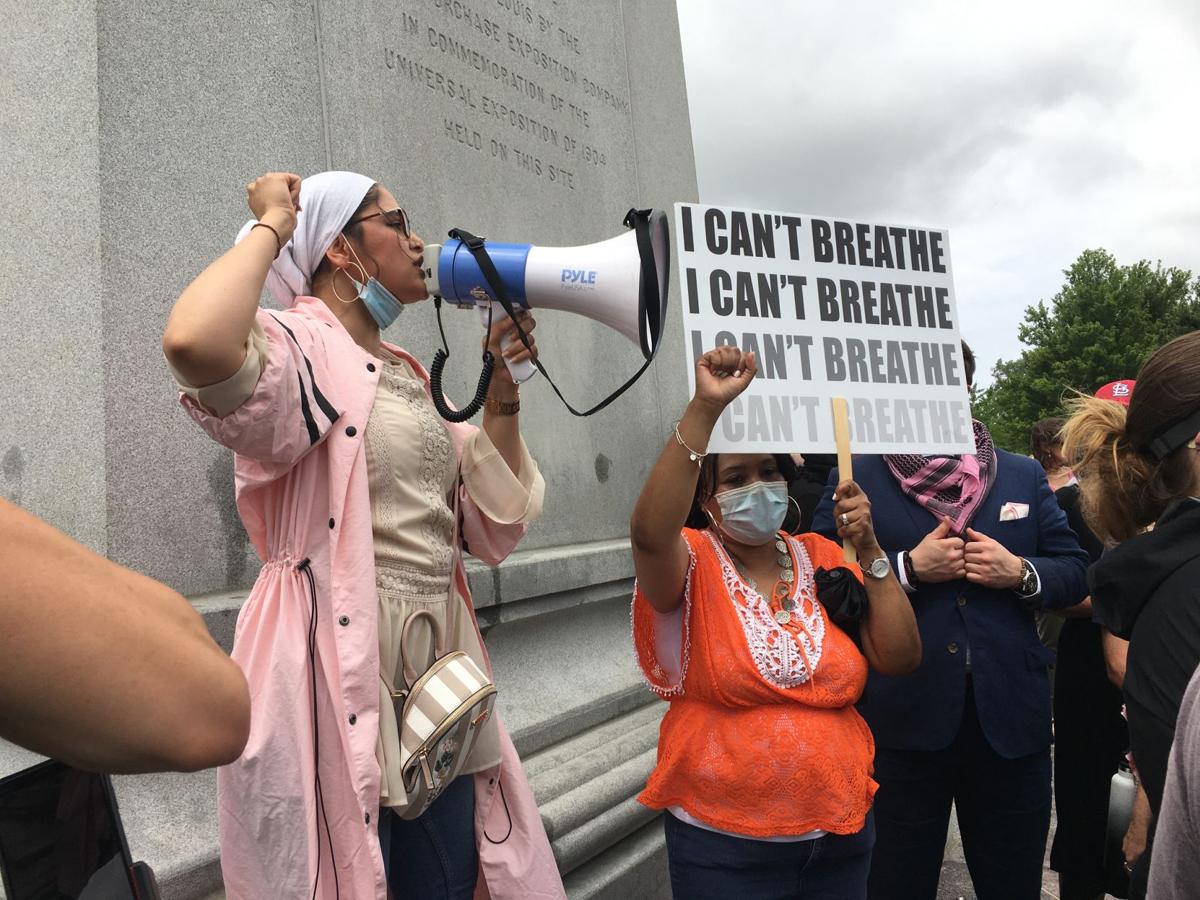 Veteran protestor Low-Key engaged in conversation with a Catholic priest from opposing sides of a demonstration, Some groups, including representatives of the Catholic Church, rallied to defend the statue of King Louis IX. While protestors, citing his history of racism, Antisemitism and Islamophobia, demanded that the statue be removed.

Saturday morning, a rally and a protest made for a clashing of faiths on Art Hill. One group demanded that its anchoring sculpture, a statue of King Louis IX, come down as a token of reconciliation against the generations of hate they feel the statue – which was erected in 1906 – represents. A collective of other groups, including individuals who said they belonged to The Catholic Church and alt-right white supremacists, stood in defense of the statue of our city’s namesake.

Over the past few weeks, statues of racist historical figures such as Christopher Columbus and Confederate soldiers have been removed – either pre-emptively by city and state governments, or by groups of protesters armed with ropes and chains – all over the world as people rise up against racism. The removals have come in the wake of George Floyd’s killing by police officer Derek Chauvin in Minneapolis on May 25 – which sparked global protests that are still underway.

Here in St. Louis, a statue of Columbus in Tower Grove Park was taken down on June 17th.

St. Louis resident Umar Lee, however, is not satisfied. Lee, a Muslim and activist, has worked alongside Moji Sidiqi to start a petition to remove all symbols of King Louis IX of France from the metropolitan area. Louis IX was the only king of France to be canonized in the Catholic church, and the city was named after him by French colonizers in 1764. Lee’s petition hinges on Louis IX’s historical antisemitism. One of the things he was canonized for was orchestrating the burning of thousands of copies of the Talmud – the Jewish holy book – and Islamophobia. He used money he had seized from Jewish moneylenders in his own kingdom to finance two brutal crusades against Muslims in Egypt and Tunisia.

On June 24th, Jim Hoft, of at the conservative blog “The Gateway Pundit,” called “all Catholic and Christian men and their allies” to gather for a prayer rally at the statue that upcoming Saturday. Rumors quickly spread on Facebook and Instagram that neo-Nazi and alt-right groups would be attending the rally.

In response, many local activists decided to take their own stand to call for the statue’s removal and to mobilize against the alt-right.

At around 11 a.m., several dozen Catholics – a predominantly white group – and others, including at least two identified members of the white supremacist hate group the Proud Boys, gathered at the statue to pray and to speak about how they believed it should not come down. While there were five men at the gathering who identified themselves as members of the Proud Boys, those whose names have been confirmed as of this writing are Mike Lasater and Luke Rohlfing.

Alongside the praying Catholic contingent and their more confrontational allies, Lee’s group arrived to advocate for the removal of the 1906 statue. Many in the crowd were the same faces who have been showing up this past month to advocate for racial justice. Ferguson frontline activist and advocate Cathy Daniels explained that parallels can be drawn between this effort and the efforts to remove statues of Columbus elsewhere.

“You need to understand what this means to others,” Daniels said at the rally. “St. Louis was a murderer, a rapist, genocidal maniac...a racist. Let’s call it for what it is...We’re going to do anything to make sure that this edifice to hate is toppled. We’ll make it come down.” Chants of “Black Lives Matter” and “Take It Down” echoed around the statue’s base.

The two groups intermingled, engaging in one-to-one shouting matches. They did not separate until a line of police officers – who had their backs to the Proud Boys and their alt-right colleagues – made them do so.

Multiple priests made their stand in defense of the statue, including Father Steven Schumacher with the Archdiocese of St. Louis. The anti-statue group offered him the megaphone at one point to tell his side of the story, but upon receiving waves of shouted questions from the crowd—who asked what he would say about Louis’ historical antisemitism, and whether or not he understood why they called for the statue to come down – he became flustered. He asked that the group clarify “what antisemitism exists in the Catholic church,” and was then shouted off the megaphone.

Marilyn Aleem-Shaikh, a speaker at the rally to take the statue down, said she was unintimidated by those there to demand that it remain. “I’m not really concerned about it,” she said. “I grew up right next door to a Klan member. My siblings and I were chased to school every day. We were Muslim...they used to pull off our hijabs – and make it hard for us to live. We were the only Black family in our neighborhood.”

“It’s about time we get statues like this taken down, so we have statues that represent all people, not just certain white Christians,” she added. Another activist, who went by PJ, suggested that the statue be replaced with a statue of a Black woman.

“I thought it would be a better representation for St. Louis,” she said. “It would be great for young Black girls and boys to look up to her.” She added that she would not have come had she not heard that white supremacists would be at the rally.

“I didn’t honestly come here to support taking down the statue, per se, but I came here to counter-protest the white supremacists,” PJ added. “My son, he doesn’t deserve to grow up in a world filled with that hate.”

Towards the end of the rally, the crowd’s focus shifted to calls on mayor Lyda Krewson to resign. Krewson made national news for reading the full names and addresses of nearly a dozen of city residents who submitted letters recommending that zero dollars of the city’s budget be allocated to funding for police during a Facebook Live COVID-19 update Friday afternoon.

“It was irresponsible of the Mayor to publicize the names and addresses of her constituents,” St. Louis City Treasurer said via Twitter. “The timing of her disclosure is ironically the day before an alt-right/KKK rally in our city.”

Lee tied in their action of demanding the removal of the statue atop of Art Hill with Krewson – who has received nearly 30,000 online signatures on a Change.org petition created by activist Maxi Glamour calling for her resignation.

“She needs to resign,” Lee continued. “And if she would like to do one thing in closing, she could collect this trash and tear this down.”

This is propaganda. Without the Catholic church there would be no Western civilzation. We feed more hungry, house & clothe more needy, treat more sick, visit more prisoners & educate more students than any other institution on the planet. That statue is sacred to 1.3 billion people. Your reasons for its removal are not based in fact. You are either trying to deliberately mislead your readers or you are ignorant.

One of the things he was canonized for was burning books? You have the balls to bring up book burning? We venerate our statues for a reason. I guess Anti-Catholicism is the only acceptable prejudice. Makes sense since we invite our believers to believe their own reason.

The article only gives contect that reinforces a lefty narrative. Kumar Lee and Moji Sidiqi are described as Muslims who oppose bigotry, but the writer fails to note that the Islamic Ottoman Empire which ruled Eastern Europe, North Africa and the Mideast for centuries maintained legal slavery until 1921. Which is better than Saudi Arabia which allowed black slavery till 1962. Calling all conservatives "altrite" while never referring to BLM as Marxist/Communists is also dishonest. Why don't any of these 'journalists' also point out that Minneapolis' and Minnesota's racist systems are completely run by Democrats?

I was there. There was a group of Catholics kneeling to a picture of Jesus and Mother Mary, praying. There were no proud boys or alt right you quack. You people are despicable.

BLM is a domestic terrorist organization. You failed to cover the brutal attack on an elderly man! What a slanted article!