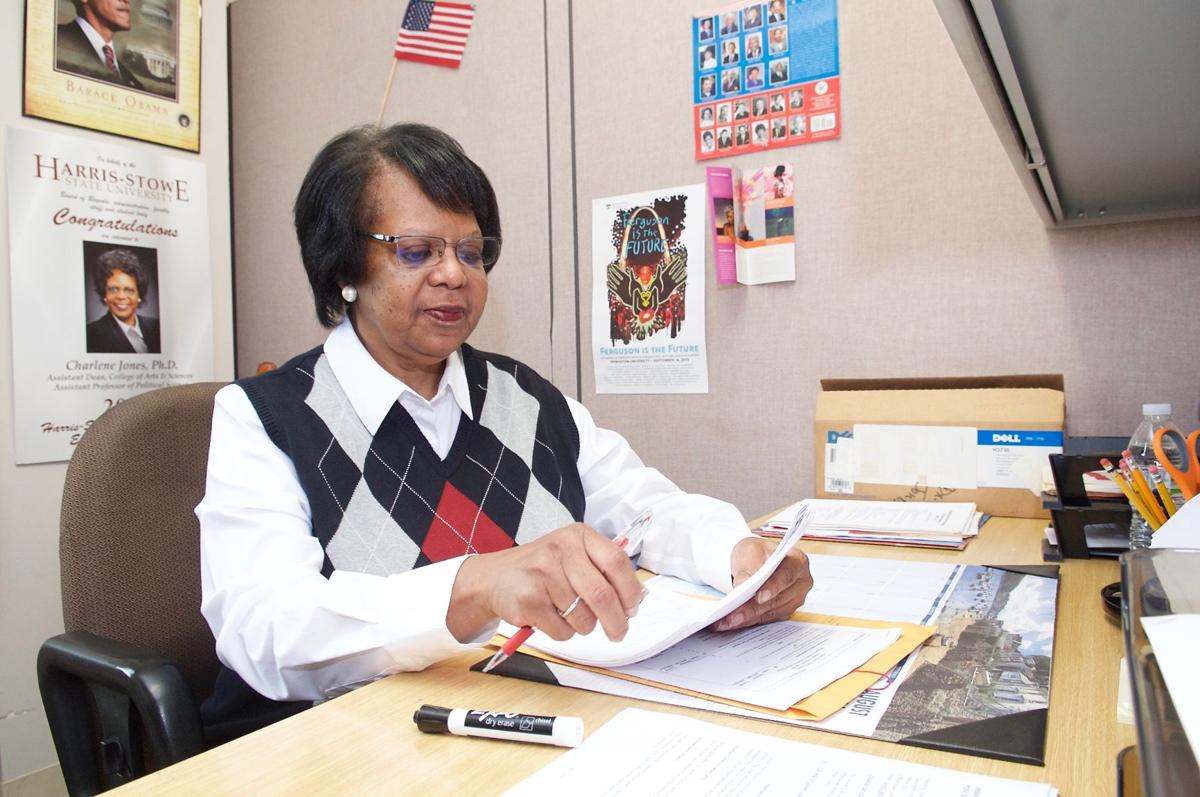 On October 1, Charlene Jones will receive the 2016 Lifetime Achiever in Education award at the St. Louis American Foundation’s Salute to Excellence in Education Scholarship and Awards Gala. Her current position is assistant dean of the College of Arts and Sciences at Harris-Stowe State University. Photo by Wiley Price / St. Louis American 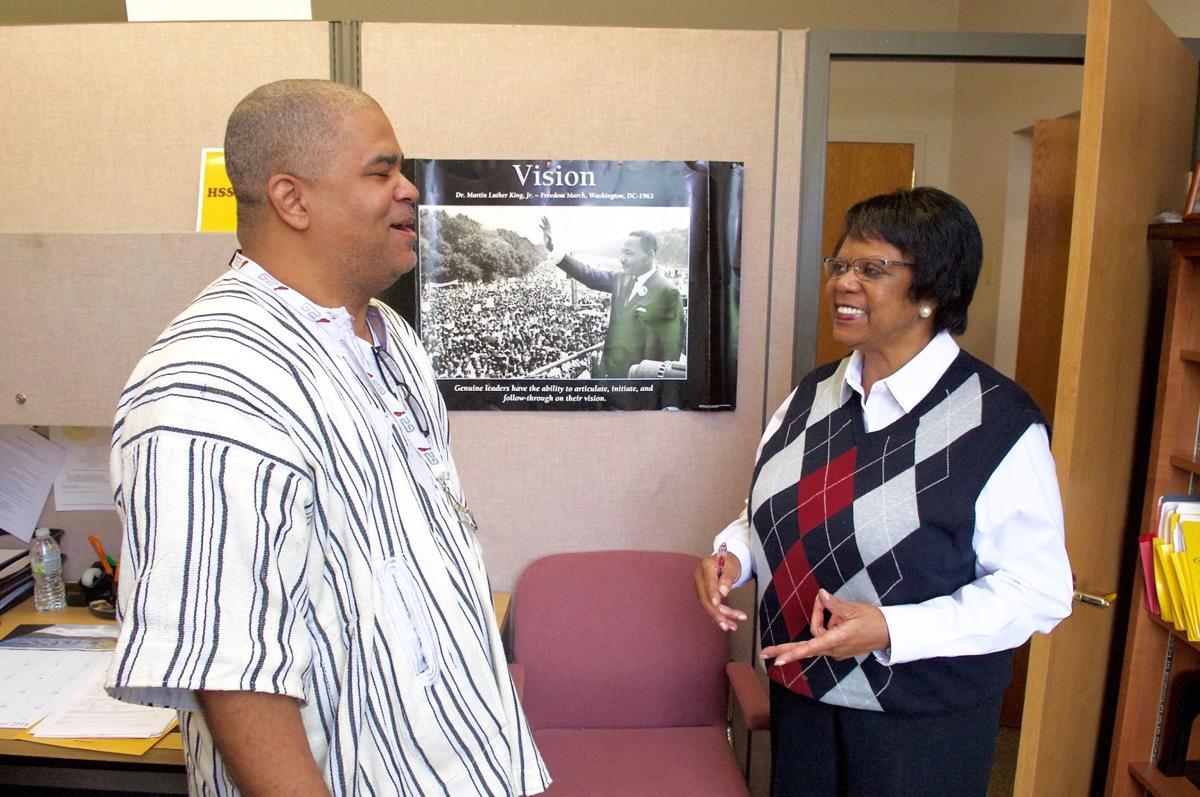 Charlene Jones, the assistant dean of the College of Arts and Sciences at Harris-Stowe State University and a political science professor, spoke with professor Reynaldo Anderson in her office on Wednesday, August 24. Jones will receive the 2016 Lifetime Achiever in Education award at the St. Louis American Foundation’s Salute to Excellence in Education Scholarship and Awards Gala. Photo by Wiley Price / St. Louis American

On October 1, Charlene Jones will receive the 2016 Lifetime Achiever in Education award at the St. Louis American Foundation’s Salute to Excellence in Education Scholarship and Awards Gala. Her current position is assistant dean of the College of Arts and Sciences at Harris-Stowe State University. Photo by Wiley Price / St. Louis American

Charlene Jones, the assistant dean of the College of Arts and Sciences at Harris-Stowe State University and a political science professor, spoke with professor Reynaldo Anderson in her office on Wednesday, August 24. Jones will receive the 2016 Lifetime Achiever in Education award at the St. Louis American Foundation’s Salute to Excellence in Education Scholarship and Awards Gala. Photo by Wiley Price / St. Louis American

Charlene Jones remembers walking to Vashon High School from her family’s apartment in the Pruitt-Igoe housing complex, located at Jefferson and Cass avenues.

Jones, now the assistant dean of the College of Arts and Sciences at Harris-Stowe State University and a political science professor, came from a family of nine children.

“Pruitt-Igoe was a godsend to have the bedroom space for all of the children,” said the 1965 Vashon graduate, “but on the other hand it was so very impoverished.”

Looking back, the housing structure was not conducive to living, with so many people living in a small area, she said. But Vashon teachers didn’t care what neighborhood the students came from; they demanded excellence, she said.

In the late 1990s, Jones was able to give back to the school that supported her success. As a St. Louis Public Schools administrator, Jones led the campaign that passed a $40-million bond issue to build a new Vashon High School. The facility opened in 2002.

“That was phenomenal,” she said. “Students who attend Vashon High School come from the most challenging neighborhoods that you will find in the metropolitan area. To be able to give them a state-of-the-art school that they can learn in, that is something I am very proud of.”

On Saturday, October 1, Jones will receive the 2016 Lifetime Achiever in Education award at the St. Louis American Foundation’s Salute to Excellence in Education Scholarship and Awards Gala.

“The smartest person I know is Charlene,” former city comptroller Virvus Jones said of his longtime, informal campaign consultant and friend. “Tax campaigns are harder to win than candidate campaigns. From my perspective, she is one of the least-known but one of the smartest people in understanding this political environment and how to win campaigns.”

Charlene (not related to Virvus) led the campaign this past spring for a property-tax increase that secured $27 million for the district. It passed with 67 percent of the vote.

Virvus said he first met Charlene while she was a professor and he was a research assistant at St. Louis Community College. Virvus introduced Charlene to then SLPS superintendent Jerome Jones, who was the district’s first African-American super.

In April 1983, the district had just unsuccessfully attempted to pass a bond issue and only received 37 percent of the vote, “which was awful,” Charlene said.

She then developed and managed her first campaign for the district in November 1983, which led the district to its first win in many years.

Charlene said the district’s biggest mistake was believing that all it needed to do was put the issue on the ballot and they would win, she said.

“That has never been the case,” she said. “If you want to win, there’s a full host of things that have to be put in place.”

Charlene held several administrative positions in the district, while simultaneously managing the district’s ballots issues. Those positions included executive director of planning, associate superintendent for personnel, and assistant to the superintendent. She spearheaded the districts’ comprehensive long-range plan, and assisted the Special Administrative Board in coordinating the Saturday Summit – which drew a record attendance of 1,500 parents, staff and community members to begin the planning process.

“As a veteran educator and public servant, her contribution to the St. Louis community is legendary,” said Dwaun J. Warmack, president of Harris-Stowe. “Dr. Jones has been a fierce advocate for improving education opportunities for students for more than 30 years.”

Over the past seven years at Harris-Stowe, Charlene has helped to establish and grow the university’s political science program and serves as a trusted mentor for many students, Warmack said.

“She came to Harris-Stowe just as the country was celebrating its first African-American president, so there was renewed student interest in politics and public service,” he said.

She has harnessed that enthusiasm to increase participation in the university’s Constitution Day celebration, which she established.  The annual event highlights the importance of the U.S. Constitution as the bedrock of our country’s democracy and demonstrates to students how relevant is to their lives today.

Harris-Stowe first offered a political science degree in the 2015-16 academic year. There are currently about a dozen students in the program, and the first students may be eligible to graduate next year.

Charlene’s support for Harris-Stowe precedes her tenure as a professor, since she was an ardent member of the HSSU Board of Regents for several years.

As a high school student at Vashon, Charlene was a National Honor Society member, president of senior band and captain of the cheerleaders. She received a full scholarship to Rockford College and obtained her bachelor’s degree in political science in 1968. She received her master’s in political science from University of Colorado – Boulder in 1971 and her doctorate in public policy analysis and administration from Saint Louis University in 1986.

“What makes her unique is that she is not only educated in the field, she has experience in it,” said former state legislator and attorney Elbert Walton. “Charlene has been one of the leading people in St. Louis who have provided good council and good support in public-policy decision making.”

Virvus said that both he and Charlene’s humble beginnings were influential in their career paths.

“We both were poor, but early on we both concluded that there are two types of power in the world – economic power and political power,” Virvus said. “Given we weren’t born rich and in the middle class, the prospect of getting economic power was limited. But the time when we came along was when the political process was being opened up.”

Charlene agreed with Virvus’ assessment. And early on, she decided that she wanted to use political power to improve education.

“When you win, you win money that can go into the school district to help students,” Charlene said. “The most satisfying accomplishment of my tenure is being able to give students – who would not have the resources otherwise – the resources they need to succeed.”

The 2016 Salute to Excellence in Education Gala will be held at 6 p.m. Saturday, October 1, 2016 at the America's Center Ballroom, following a reception at 5 p.m. Tickets are on sale now. Individual tickets are $85 each/$850 table, and VIP/Corporate tickets are $1,500 table. For more information or to purchase tickets, visit www.stlamerican.com and click on Salute to Excellence, or call 314-533-8000.