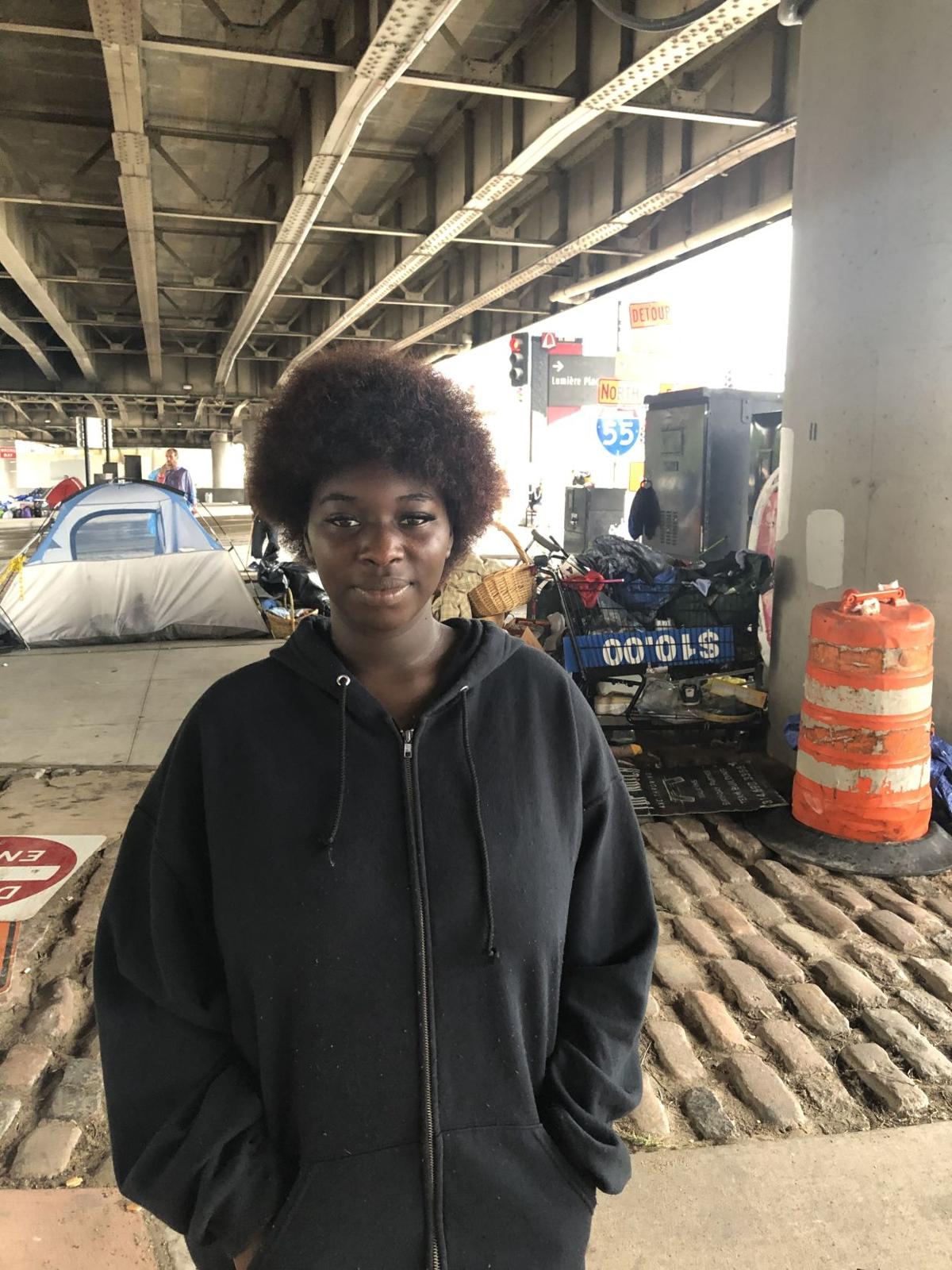 Asia Morgan, 18, currently lives in the encampment with her boyfriend, Demetrius. 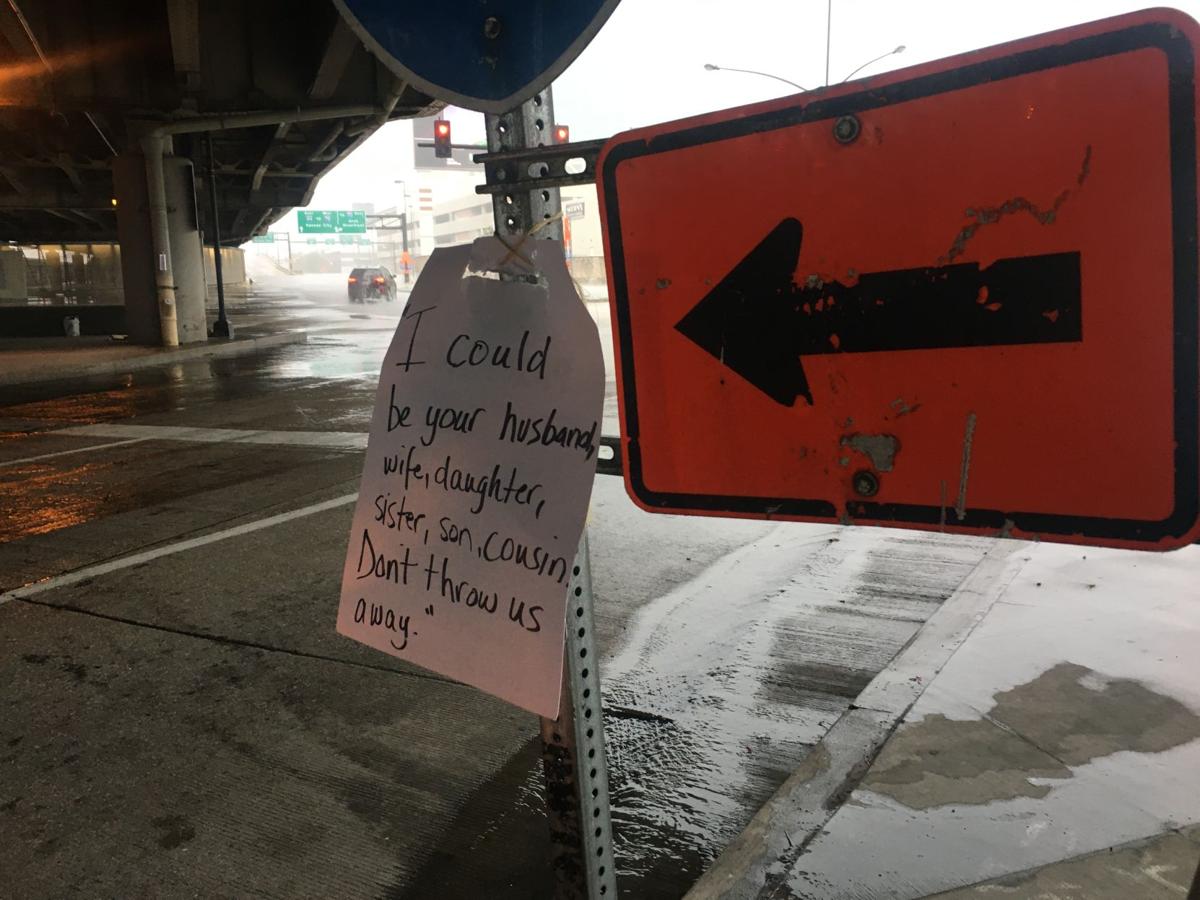 On the day of the planned eviction, unhoused individuals placed signs around the camp. 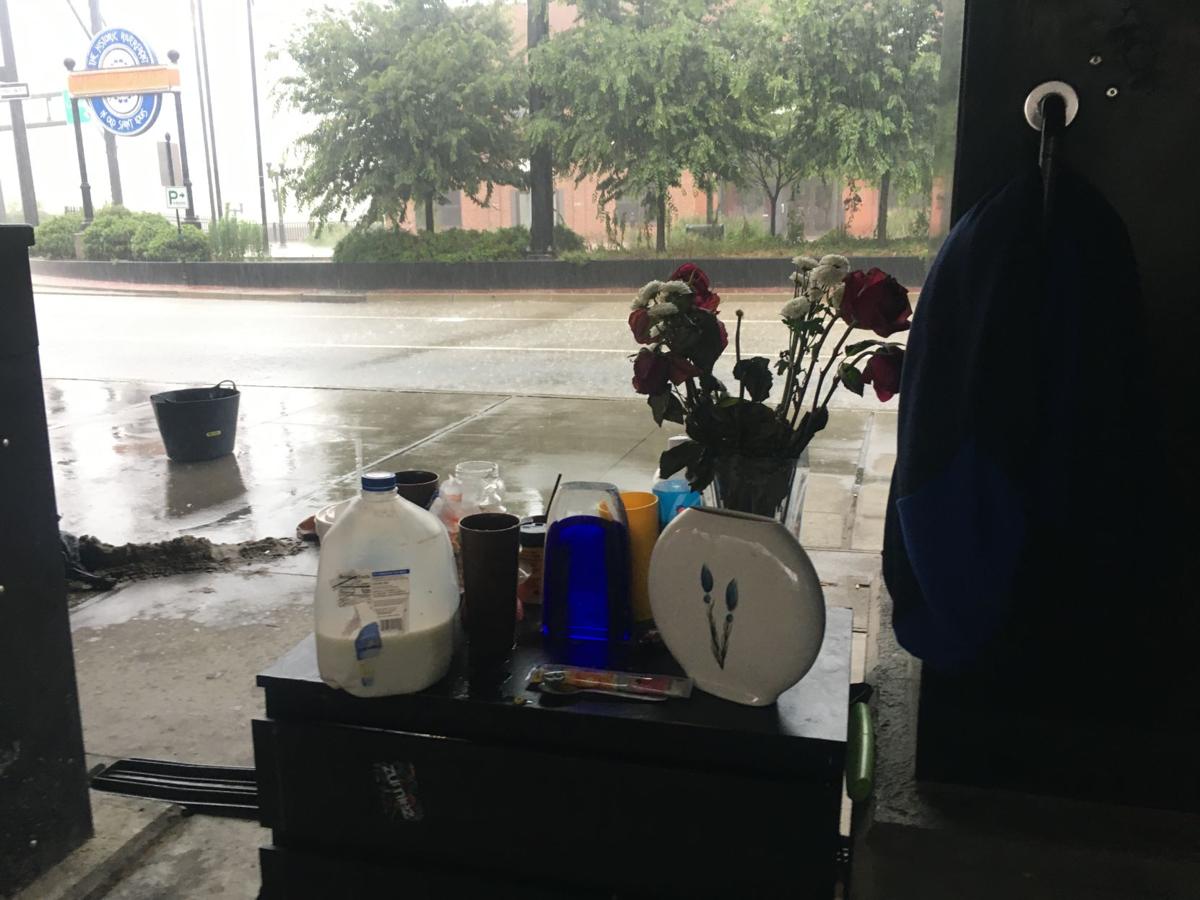 One resident brought a vase full of flowers to the encampment.
1 of 3

Asia Morgan, 18, currently lives in the encampment with her boyfriend, Demetrius.

On the day of the planned eviction, unhoused individuals placed signs around the camp.

One resident brought a vase full of flowers to the encampment.

Asia Morgan, 18, recently aged out of the foster care system. She was left fending for herself on the street, where she made her way to the homeless encampment on Market Street. The City of St. Louis evicted her and the rest of the camp on May 1, citing public health concerns relative to the COVID-19 pandemic.

The city’s temporary housing grant program funded by the CARES act paid for her room at the Red Roof Inn. Three weeks ago, Morgan and her boyfriend Demetrius were out on the street again. According to activist Alex Cohen, the city terminated its contract with the hotel. Morgan joined about 15 other unhoused people living under a downtown Interstate 44/Interstate 64 overpass. She and Demetrius share a tent there as they attempt to get their four-month-old child back from state custody and she nurses a new pregnancy.

They are the youngest residents of the settlement, where several tents and pieces of furniture are grouped together, along with food, coolers, and decorations like string lights and flowers. Buckets were left out the morning of June 30 to catch the pouring rain and keep it from seeping into tents. That morning, however, the mood in the settlement was tense: the city had warned it would evict them.

Eviction notices had been posted around the underpass campsite on June 26. The notices stated that, as the underpass is Missouri Department of Transportation property, the people camped there were trespassing.

MoDOT had expressed concerns to the city about fires and pedestrian access. The city’s eviction notice warned of “potential exposure and spread of COVID-19.” Residents were told to remove all their belongings by 9 a.m. June 30.

Camp resident Nikki was struck by the city’s concern for COVID spread. “They said we don’t have proper sanitation because we don’t have a handwashing station or port-a-potty or the ability to shower,” Nikki said. “If they were so worried about it, then they should have come and medically screened us. They haven’t offered us masks, they haven’t offered us sanitizer, gloves, nothing.”

Advocate Sharon Morrow said that while housed in the hotel, people like Morgan and Nikki did not receive any assistance in finding more permanent places to live. “They received no services,” she said.

Steve Conway, chief of staff for Mayor Lyda Krewson, said that the city contracted with “a couple of different groups that are providing them with the caseworkers” to assist with a range of social services. A spokesperson for the mayor said these services have been offered to people in the tent encampment.

“The last time we heard from the mayor's office was five or six days ago,” Cohen said on June 30, “and they said explicitly nobody’s being evicted.”

On June 30, in fact, no one arrived to take the underpass residents to the Buder Recreational Center Shelter as promised. No city employees appeared. Around 12:30 p.m. the next day, several police officers came to the camp. “The police said that in 10 days they’re going to come mass arrest,” advocate Lisa Winter said on a Facebook live video.

Conway said that rainy weather was a factor in the delay. The 10-day delay does not solve camp residents’ problems finding adequate housing.

“The options they have are jail, live on the street but in a different location, or Buder,” Winter said. “COVID-19 is one of the concerns, but those are communal shelters where you sleep in one room on cots, and if you’ve had any kind of conflict at the shelter, that is not an option.”

And the housing options are likely to become slimmer, as more and more people lose their employment and end up on the street due to COVID-19; the unemployment rate for the St. Louis region is 11.2%, according to the U.S. Bureau of Labor Statistics.

According to the ACLU of Missouri, the state is one of only nine that has not issued a statewide eviction moratorium during the pandemic. “Evictions undoubtedly will disproportionately distress communities of color, and particularly, women of color,” the ACLU stated. “Earlier this year, the ACLU Women’s Rights Project and Data Analytics team found that, on average, Black women renters had evictions filed against them by landlords at double the rate of white renters (or higher) in 17 of 36 states, including Missouri.”

Though the ACLU has filed an amicus brief asking for evictions to be halted, they are still ongoing in Missouri.

Morrow said that the I-64 overpass camp has already seen an influx of new residents due to the uptick in evictions. “We’ve seen an increase of new people,” she said. “They all come down here.” But on July 10, any evictees who seek shelter at the underpass will face arrest.

“We were kicked out of the hotel,” Morgan said. “Now they’re moving us again.”