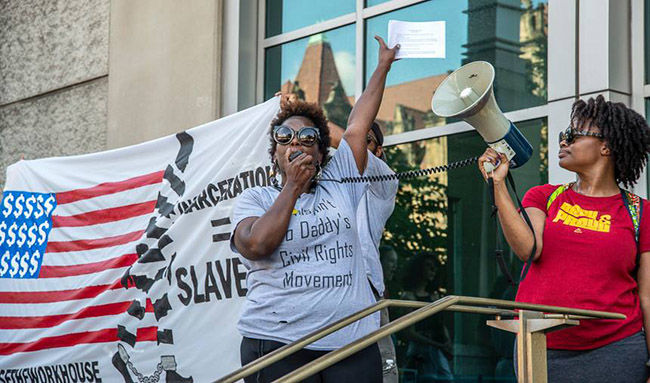 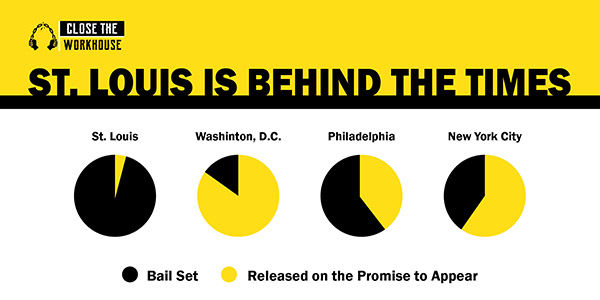 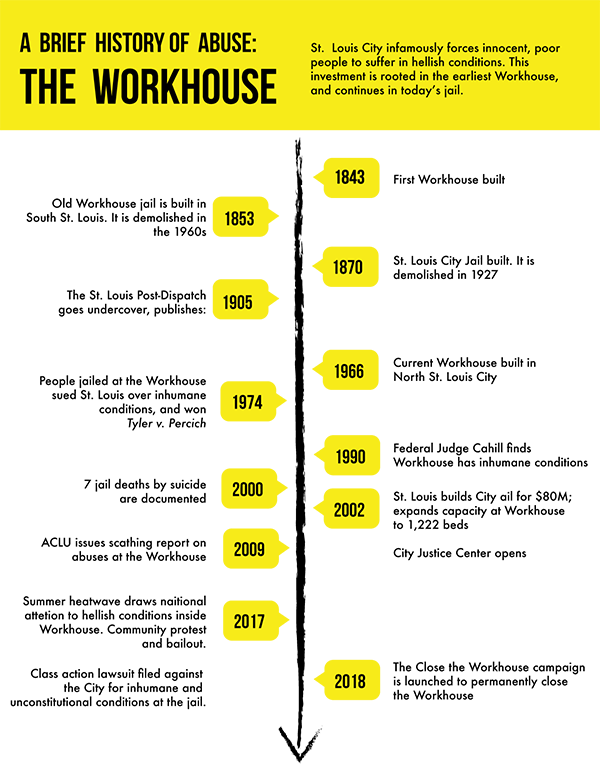 When Inez Bordeaux first walked into the Medium Security Institution commonly known as the Workhouse, she said she could feel the hopelessness. It was festering like the black mold on the walls and rats running under the cell doors.

“You can feel the desperation,” said Bordeaux, a mother of four who was working as a nurse at the time.

In spring 2017, Bordeaux was arrested while driving for failing to report to a probation officer – an officer who had actually never been assigned to her, she said. She landed in the Workhouse with a bond set at $25,000. Because she earned less than $1,000 per month, she wasn’t able to pay even 10 percent of the bond and ended up spending 30 days in the Workhouse awaiting a probation violation hearing.

For the first three days, she was held in solitary confinement because the nurse deemed her a suicide risk.

“I was crying because I was separated from my children and devastated to be in the worst place possible,” Inez said. “And so they deemed me a suicide risk and they took me to the women’s pod and they took all my clothes away. They gave me a suicide smock, and they left me in that room for three days.”

She lost her job and her nursing license, which she spent a year trying to get back. Inez is now a leader in the Close the Workhouse campaign, which was announced on Thursday, September 13 in the form of a 42-page report with that title. The primary authors are four local advocacy groups: Action St. Louis, ArchCity Defenders, the Bail Project and Missourians Organizing for Reform and Empowerment (M.O.R.E.)

“The City of St. Louis condemns hundreds of mostly poor and black people to suffer in unspeakably hellish and inhumane conditions at the ‘Workhouse,’” the report states. “Over 95 percent of people at the Workhouse are awaiting trial and remain incarcerated due to their inability to afford unusually high and unconstitutional cash bonds.”

The​ Close the Workhouse campaign calls for the immediate closure of the Workhouse, a reduced incarcerated population in St. Louis and overall reform to public safety. It provides statistics, along with several first-hand accounts of people who have served time in the Workhouse. It also makes direct calls to action to the mayor, the circuit attorney and the Board of Aldermen.

The campaign calls on the mayor to push forward legislation that would close the Workhouse. It asks the Board of Aldermen to stop approving funding for the Workhouse and introduce legislation to close it. The report gives a lengthier list of recommendations for the circuit attorney, which are detailed below.

The St. Louis American received an embargoed copy of the report and was not able to request a comment about the specific research from Mayor Lyda Krewson and Circuit Attorney Kim Gardner before press time. However, The American did ask Krewson and Gardner about closing the Workhouse and the critiques mentioned.

Krewson did not comment on whether she supports the jail’s closure. Her spokesman stated in an email, “We are committed to reducing the population in our city’s jails in safe and responsible ways. Over the past 12 months, the city’s jail population has decreased 12 percent, mostly from the Medium Security Institution,” or Workhouse.

Funds from Prop 1, which the voters passed this summer, will allow the city to make upgrades to the facility, according to Krewson’s statement.

As the city’s lead prosecutor, Gardner has the power to decline to prosecute certain crimes and to dismiss charges, the report states.

“Current prosecutorial practices result in a cycle of incarcerating poor people and communities of color,” the report states. “Racial profiling leads courtrooms and jails to be unjustly filled with people of color.”

Black people are 85 percent more likely to be stopped by police than white people, it states, “although there are no statistics showing they are more likely to commit crimes.” ​Nearly 90 percent of the people incarcerated at the jail are black, while just under half of St. Louis city residents are black, according to the report.

The campaign is calling on the circuit attorney to recommend automatic pretrial release for individuals charged with misdemeanors, victimless crimes and poverty-related offenses.

In March 2018, there were 107 individuals in the Workhouse for technical probation violations, 16 for driving-related charges and 167 for drug possession charges, according to the report. There were also 225 people who faced what the campaign calls “poverty-related charges,” which include non-payment of child support, trespassing, stealing (not a car or a firearm), prostitution, and receiving stolen property. And 186 people faced what the report deemed to be “victimless charges,” including unlawful possession of a gun, resisting arrest and perjury.

“Kim Gardner has admitted that most people in the Workhouse are facing charges that are not serious and are non-violent, but ​only [about] 4 percent of people in St. Louis are ever offered release on a promise to appear,” the report states.​ “If rates of pretrial release were similar to other progressive cities, like Philadelphia, this would result in the immediate release of 480 people. This move alone would allow us to shut down the Workhouse.”

When The American asked Gardner if she was going to push for automatic pretrial release, her spokeswoman said in an email, “The circuit attorney is committed to ensuring that we have a bail system that focuses on public safety and improving individual appearances at court proceedings. Gardner has already made policy changes in her office that reduce the chances of someone being confined pre-trial solely because of a person’s inability to pay.”

​One year of incarceration costs St. Louis $25,000. The report emphasized the importance of diversion programs that provide opportunities and programs to keep people out of the criminal justice system. Successful pre-plea diversion programs connect individuals with important social service supports while restricting the collateral impacts of the criminal legal system, the report states.

“Gardner’s office has four diversion programs, but they are very limited​ with only 150 participants in over one year,” the report states. “All diversion programs must be expanded, with a special focus on pre-plea diversion.”

Gardner said that the city has several diversion programs with more than 300 participants in them.

“There are no hard limits placed on any of our diversion programs,” Gardner’s spokeswoman stated. “These programs are being managed based on goals, milestones and internal resources.”

Last year, ArchCity Defenders filed a class-action lawsuit against the city for inhumane conditions at the Workhouse, said Blake Strode, executive director of ArchCity Defenders. Now they are calling for its permanent closure.

“This report highlights the systemic disparities and structural racism which has plagued our region for decades,” Strode said. “The Workhouse in many ways symbolizes these destructive forces.”