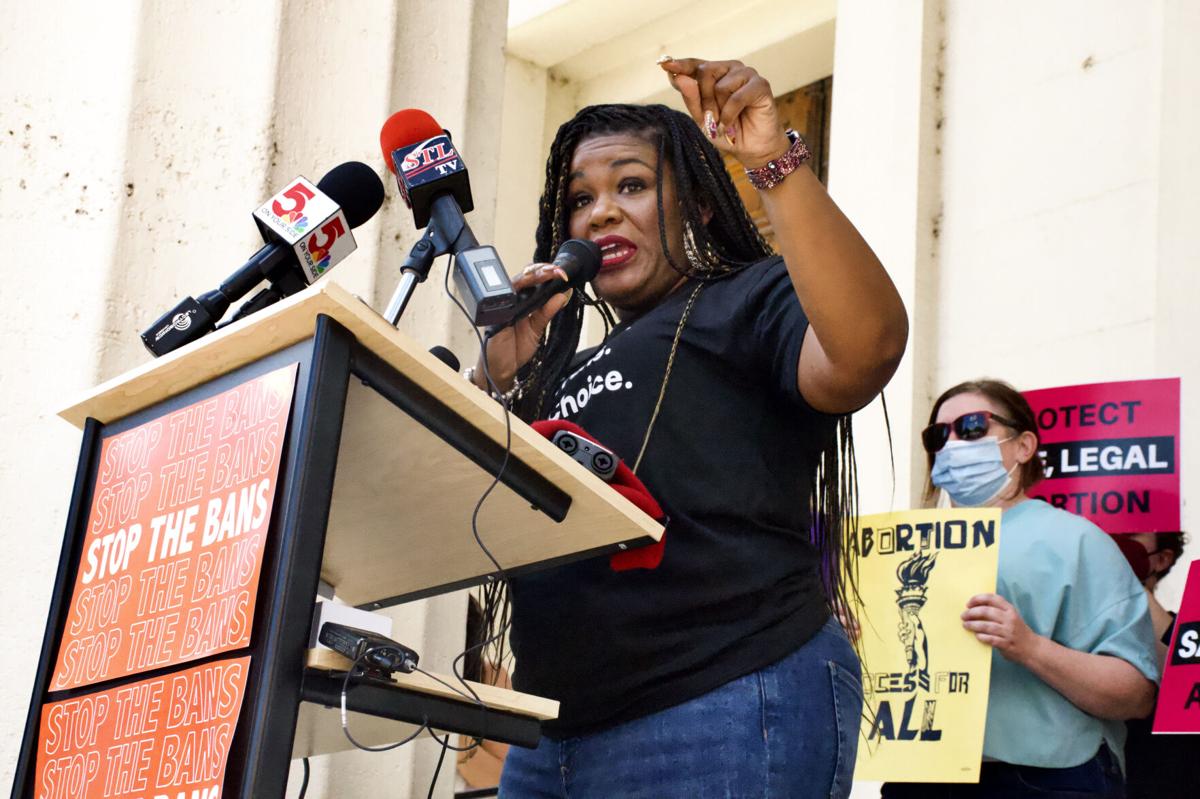 Congresswoman Cori Bush ((D-MO) told a story she had never shared publicly before of a young girl in St. Louis who became pregnant before she was ready, during the reproductive rights rally at the Old Courthouse in downtown St. Louis on Thurs., Sept. 9, 2021. 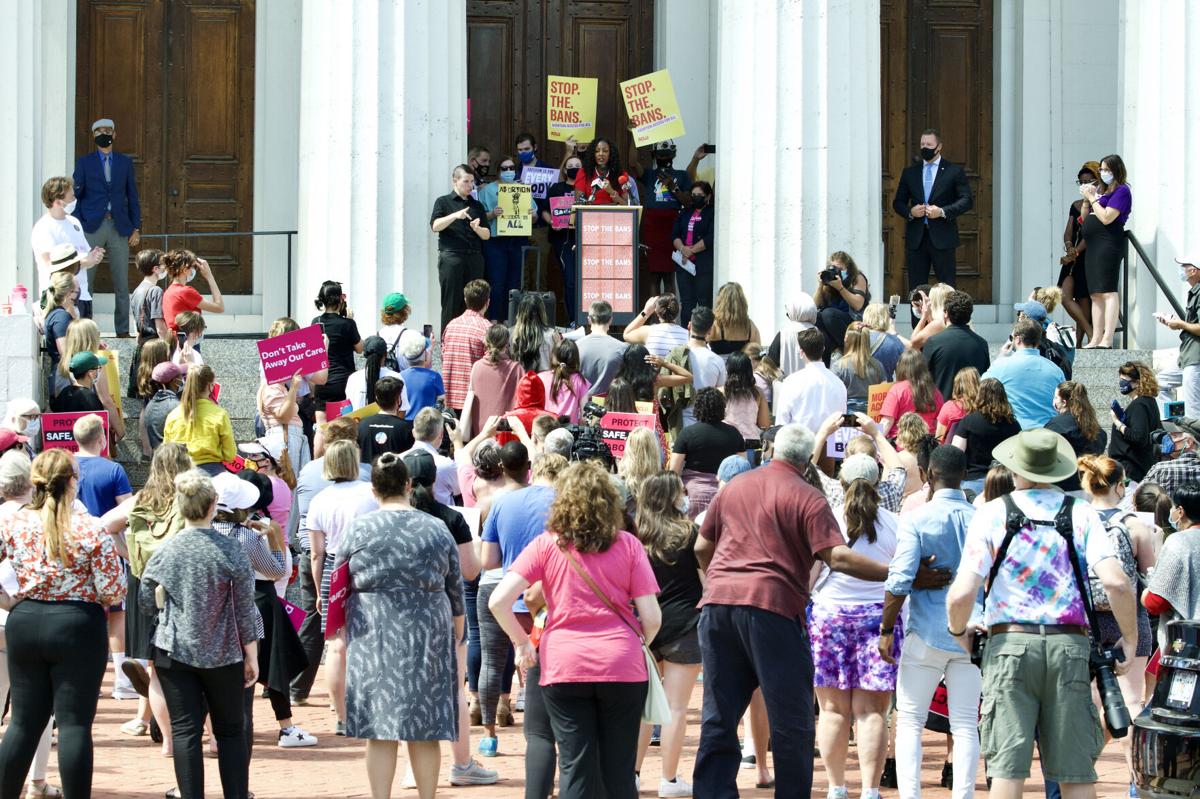 At a reproductive rights rally on the steps of the Old Courthouse Thursday, Congresswoman Cori Bush told a story she had never shared publicly before: the story of a young girl in St. Louis who became pregnant before she was ready, and was ostracized by loved ones after choosing to pursue an abortion. “She went through a lot, but services were available to treat her,” Bush remembered.

“That woman now stands before you as your United States Congresswoman,” Bush said.

Now, Bush is joining Mayor Tishaura Jones and other local lawmakers in pushing back against attempts by Missouri Republican legislators to make abortions illegal in the state.

“If these bills are allowed to pass, each and every one of us will be impacted, starting with Black and Brown and LGBTQ folks first,” Bush said. “Because everyone knows someone who has had an abortion.”

At the end of August, a Texas law took effect banning all abortions after the six-week mark, well before most people even know they are experiencing a pregnancy. Now, in Missouri, State Rep. Mary Elizabeth Coleman, R-Arnold, said she plans to introduce a bill that is similar to the Texas law.

“We are absolutely going to do everything we have in our power to try to eliminate abortion in Missouri,” Coleman said. “And not just eliminate it, but make it unthinkable.”

This is a continuation of a ceaseless push by Republicans in Missouri to eliminate abortions in the state entirely: abortion rights have been heavily restricted in this state for years, with only one functioning clinic providing abortions in the entire state. All abortions in the state are already illegal after eight weeks, though the state cannot enforce this restriction while legal challenges make their way through federal court.

Nonetheless, most people who need abortions in Missouri have long since been managing them themselves or traveling to nearby states such as Illinois to do so. Missouri law requires a 72-hour waiting period between scheduling an approved abortion procedure and getting that procedure done, which advocates say adds another hurdle to the process.

Those who do get abortions in Missouri get them at the Planned Parenthood clinic in the Central West End in St. Louis, which has borne a banner reading “STILL HERE” for multiple years.

So, when the Supreme Court upheld Texas’ decision — and made what many advocates called a move against the landmark Roe V. Wade decision of 1973 — reproductive rights supporters in Missouri were already ready to act.

Yamelsie Rodríguez, president and CEO of Reproductive Health Services of Planned Parenthood of the St. Louis Region, spoke at Thursday’s rally on the Old Courthouse steps, in front of a crowd of hundreds of supporters and a few hecklers.

If patients can’t book appointments at Missouri’s one abortion clinic, they have to go to Illinois, which many patients find financially impossible. And clinics are further strained by the Texas news: patients from Texas are already flocking to St. Louis and Granite City-area clinics to access abortion care, as the states between Texas and here, Arkansas and Oklahoma, also introduce highly restrictive abortion legislation.

In a similar situation last year when Texas Gov. Greg Abbott used COVID-19 to ban abortion, providers in the St. Louis region began to see patients traveling from Texas for care, according to Reproductive Health Services of Planned Parenthood of the St. Louis Region.

“Under this ban, people no longer have control over their lives, they cannot decide when they become parents and something that will greatly impact the trajectory of their life and their income,” Mayor Tishaura Jones said. “Texas patients are now traveling hundreds of miles out of state to receive reproductive health services, and St. Louis will not sit idly by as we see our family in Texas coming across state lines.”

Meanwhile, House Bill 126, the 2019 bill which would ban all abortions in Missouri after eight weeks, will be heard in the Eighth Circuit Court on Sept. 21.

“It’s not a matter of if these bans will spread across the country, it’s a matter of when. And for Missouri, it’s happening right now,” Congresswoman Bush said. She called on Democrats in the U.S. House and Senate to pass an act reinforcing Roe v. Wade, and to move to abolish the filibuster if this act is held up in the Senate.

“We don’t need more reproductive health restrictions,” Mayor Jones said. “Legislators all the way in Jeff City keep telling people here in St. Louis what we can and can’t do with our bodies, and I say enough is enough.”