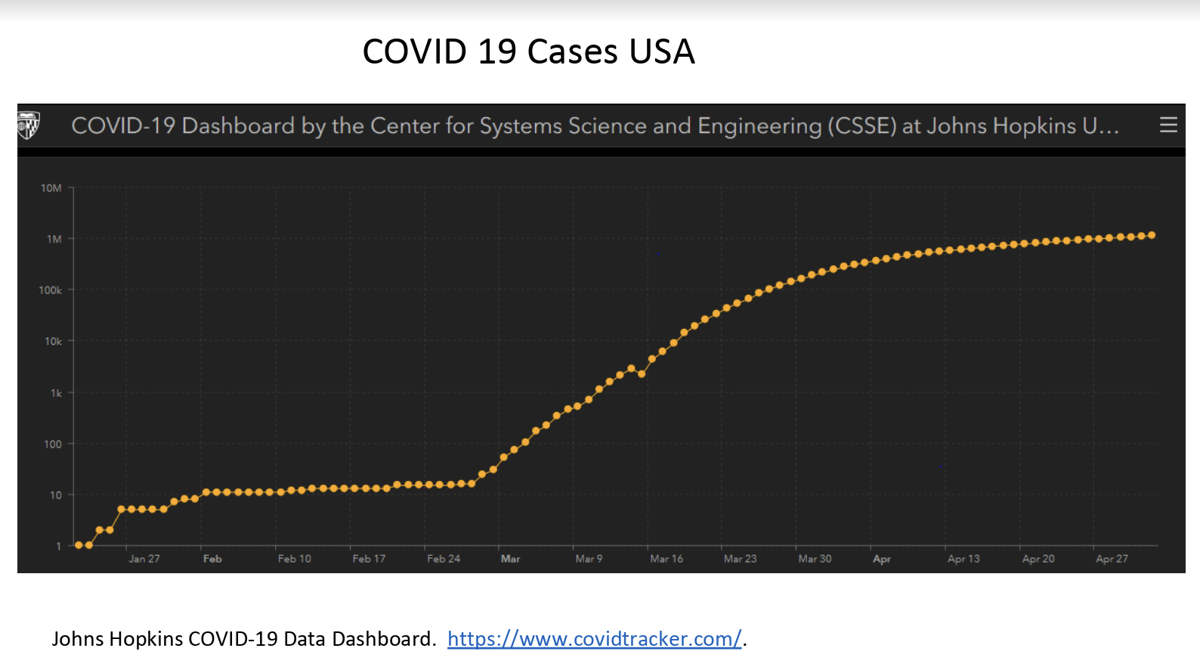 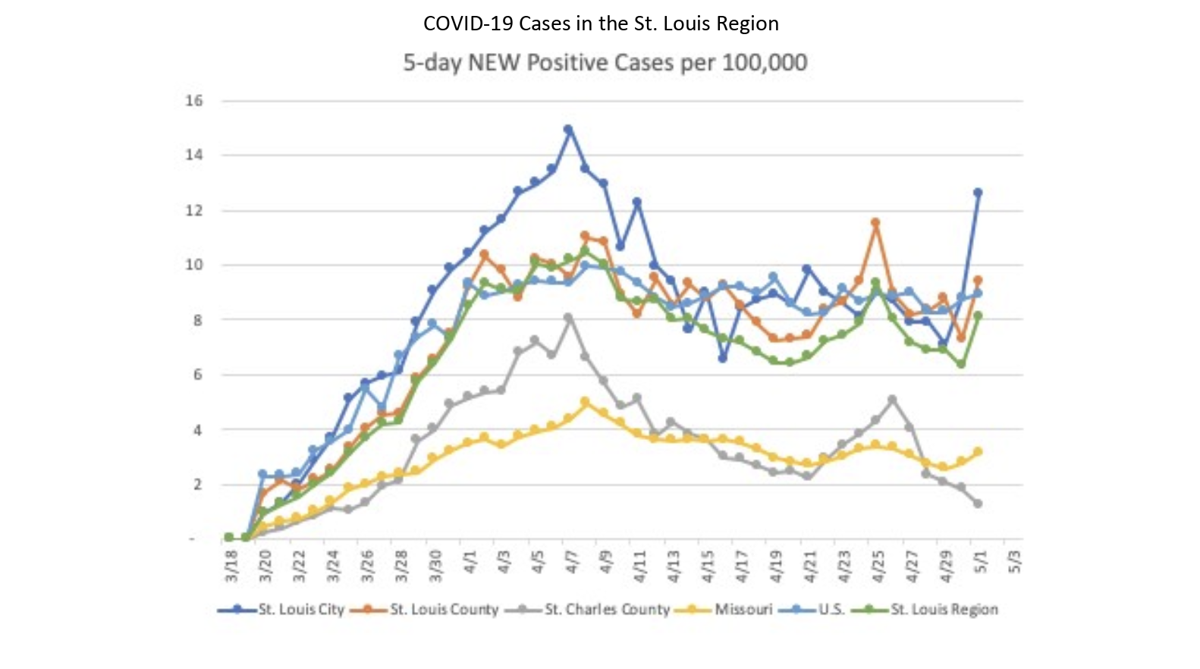 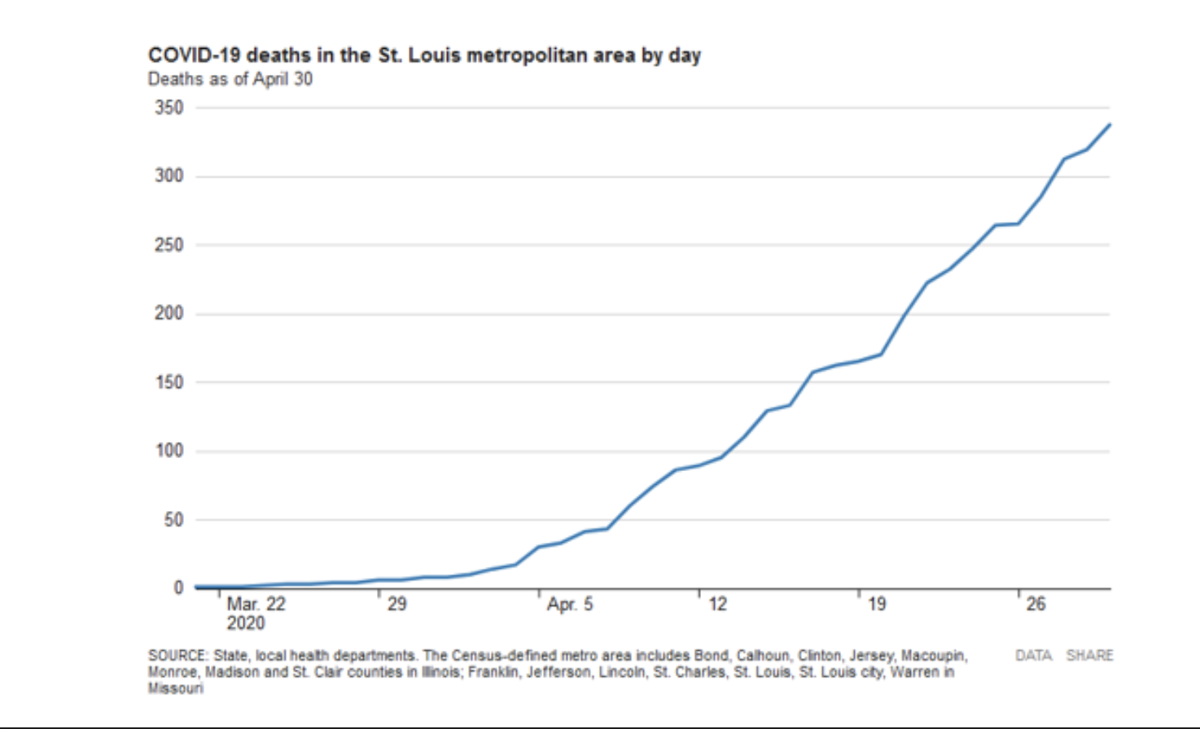 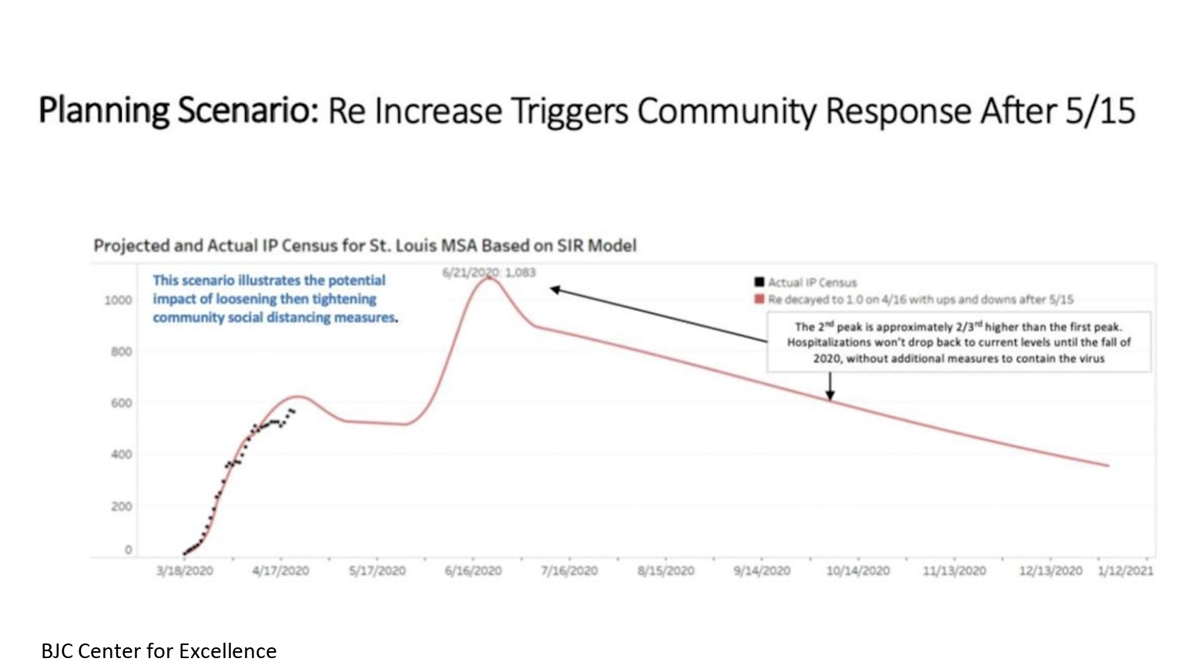 Dr. Will Ross wanted to set the record straight at the City of St. Louis’ Joint Board of Health and Hospitals meeting on Thursday, May 7. The move to lift the stay-at-home orders in the city and St. Louis County on May 18 was not based on epidemiology.

“Let’s make that abundantly clear,” said Ross, a professor at Washington University School of Medicine. “There is nothing that suggests that we are safe to lift the order. The order is being lifted solely on the basis of the adverse effect on the St. Louis economy — not because we are saying it’s safe to return to life because the pandemic is abating. It is not.”

Ross chairs the 13-member board that advises the city’s director of health, Dr. Fredrick Echols, on matters related to public health and hospitals.

At the board’s May 7 meeting, Ross gave a presentation that started with a look at COVID-19 cases throughout the country. He displayed a graph from Johns Hopskin’s Data Dashboard, showing that cases started to rapidly rise in early March and then plateaued by late March, he said.

“If this curve takes two months to increase, it’s going to take two months to decay, that’s the log math,” said Ross, referring to the graph being in logarithmic scale. “That’s why this curve is so important. We started this increase in March and now we’re two months in and this curve is not downtrending. If anything, we are seeing pockets of increase, even here in St. Louis.”

Ross believes that if the region did everything correctly in terms of social distancing, isolation and quarantine, then we would see the curve decline at the same time period — two months.

“If you want to know where this is going, ask the virus,” Ross said, quoting Dr. Anthony Fauci. “This virus is saying if all things went beautifully, we would see a longer decay by July. That’s not likely because we have early introduction of people back into the workplace. And this could put us into August.”

Ross also showed graphs of COVID-19 cases and deaths in St. Louis. The number of cases are at a plateau, but we have not seen a plateau in deaths, he said.

The last slide Ross showed a model of what BJC HealthCare anticipates will happen after the restrictions are lifted on May 18. The model took into account the reintegration of people into the community and very limited testing capacity, he said.

“This is a pretty accurate model — by late June to early July, we will see a peak in hospital cases,” Ross said. “We don’t get back to where we are until October.”

The American asked Dr. Alex Garza, who is the chief medical officer for SSM Health and incident commander for the St. Louis Metropolitan Pandemic Task Force, to respond to the model. He said, “The slide represents a scenario that could occur but should not be taken as a prediction.”

“Let no one on the board be confused,” Ross said. “The lifting of the shelter-in-place orders is not based on how we view the virus will behave.”

The orders to reduce public health restrictions are based on concern of putting people further at risk with closed businesses, furloughs and layoffs, he said.

“That information is so critical because as a health board, we have to realize that our goal is to protect the community,” Ross said. “The concern we all have in public health is because of that second peak as we lift the orders, we are anticipating a doubling of hospitalizations. We have not reached hospital capacity yet, but by July if we are not doing things well, we will reach hospital capacity. That is an absolute statement.”

Ross also pointed to projections from the Wharton School and Chris Murray at the University of Washington indicating that total deaths will increase from 75,000 to 200,000-300,000 because we lifted the shelter-in-place orders too early in the next six months.

After his presentation, Ross turned over the meeting to Dr. Echols to talk about the preparations that the City of St. Louis is making prior to May 18.

As of May 11, St. Louis County has reported 258 deaths and 3932 cases since the onset of the pandemic, and St. Charles had 670 cases and 47 deaths — these counties don't regularly report race data. Between those three counties, that’s 6,115 cases and 391 deaths.

Echols said the numbers of new cases that are being reported each day have decreased over the last two weeks.

“However there is a lot of work to be done, as Dr. Ross mentioned,” Echols said. With the “community mitigation” measures the city’s implemented, the city has been able to reduce the reproduction number, as called R₀, to .09. This means the average number of people who will be infected by someone with the virus is just below one. That’s far below where the region started in March, which is 5.

“However, the concern is when you lift some of these community mitigation measures, then there is potential for the R₀ (pronounced R-naught) to increase,” he said.

Their models show that the reproduction number could go increase to 1.5 after the measures are lifted, Echols said. The city’s “phased approach” will be purposeful, he said. The first-phase guideline requires: maintain six feet of distance between employees and consumers, no social gatherings of more than ten people and strong recommendation to wear masks in public.

It also recommends that vulnerable populations, including those over 65 and/or individuals at high risk of illness, should stay at home as much as possible and avoid social contact to reduce risk of exposure.

Regarding testing, Echols explained that the city has experienced delays in getting testing and Personal Protective Equipment (PPE). However, recently, they received 13,000 test kits. Federally Qualified Health Centers (FQHCs) that are testing in areas hardest by the virus received 3,250 kits each, he said, and the city is expecting another 7,000 kits will also go out to the FQHCs.

Echols expects 200,000 test kits to come in within the next two weeks.

In order for the city to implement Phase 1, various things have to be in place, according to the city’s most recent public health order. Those include a sustained reduction in hospital admissions, hospitals having adequate PPE, and testing for all symptomatic individuals that go to a hospital, among others.

Ross urged the city and county to give out free masks before the orders lift.

“As I said before, the board is not making the call to lift the shelter-in-place orders,” Ross said. “The board understands why the call is made and the board is willing to educate the public and prepare the public. We have to give the public the assurance that on May 18, the masks will be available. If we can’t do that, then we are doing an injustice.”