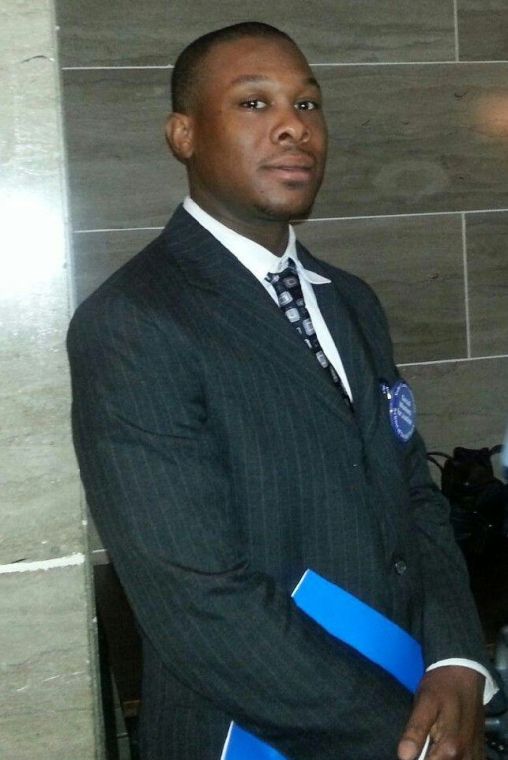 According to medical records, Cary Ball Jr. was shot at least 25 times by St. Louis police, including six times in the back, and killed on April 24. 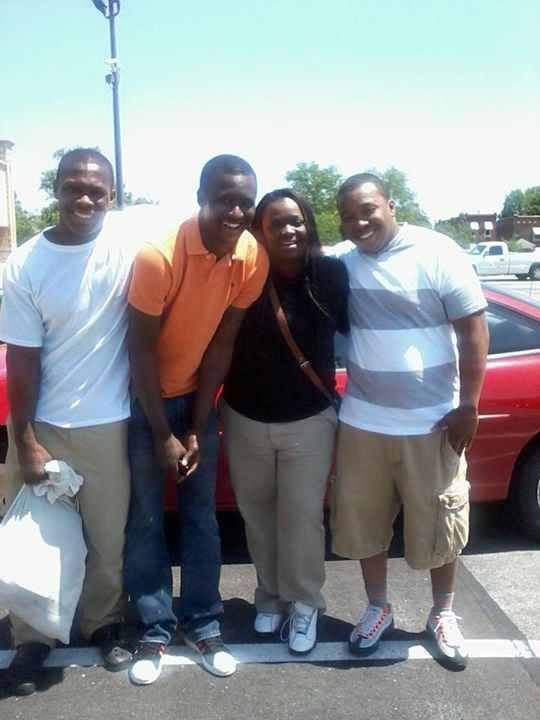 On May 2, 2012, Cary Ball Jr. (left) visited his mother at work with his brother Kevin Morris, 21, sister Ka’Chelle Morris, 19, and his brother Carlos, 24. It was Cary’s first day back in St. Louis after serving time in a Florida penitentiary. 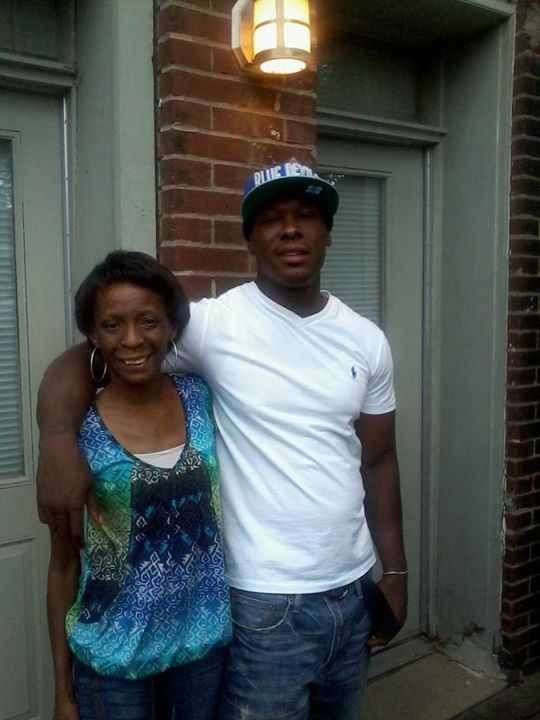 Cary Ball Jr. and his mother, Toni Taylor. According to medical records, Cary was shot at least 25 times by St. Louis police, including six times in the back, and killed on April 24, 2013.

According to medical records, Cary Ball Jr. was shot at least 25 times by St. Louis police, including six times in the back, and killed on April 24.

On May 2, 2012, Cary Ball Jr. (left) visited his mother at work with his brother Kevin Morris, 21, sister Ka’Chelle Morris, 19, and his brother Carlos, 24. It was Cary’s first day back in St. Louis after serving time in a Florida penitentiary.

Cary Ball Jr. and his mother, Toni Taylor. According to medical records, Cary was shot at least 25 times by St. Louis police, including six times in the back, and killed on April 24, 2013.

Residents living blocks north of downtown St. Louis want to know when their nightmares will go away.

When will they stop seeing the image of a 25-year-old man with his hands in the air get shot at least 25 times by police?

“Cary Ball Jr.’s death has caused the community a great deal of emotional distress,” said Carlos Ball, 24, brother of Cary Terrell Ball Jr., who was shot and killed by police on April 24.

“There were kids out on the street who saw what happened. One woman told me her six-year-old daughter now urinates on herself every time she sees a police officer.”

On April 24, Cary Ball Jr. was driving home from his catering job at a downtown banquet hall, when a police car turned on its lights behind him at Delmar Boulevard and 18th Street. Rather than pull over, Cary led St. Louis police on a high-speed chase through the downtown area. He crashed his car on the 1000 block of North 9th Street, grabbed his automatic handgun and started running east on Carr Street.

When residents heard the crash around 9:45 p.m., several came out of their homes. Three residents, who cannot be named because they may be asked to testify in litigation the family is considering, said they saw Cary stop running, throw down his gun and put his hands in the air. Cary started kneeling to the ground, with his hands up, when the two officers came running towards him, residents said.

Residents said they then saw police come up to about eight feet away from Cary, look down at Cary’s gun on the ground and start shooting. Then they handcuffed him. Residents said they expected police to arrest Cary because he had clearly surrendered.

At a 5th Ward community meeting on June 4, Police Chief Sam Dotson said the department has not released a police report on the incident because Cary’s case is under investigation and it could take months before it is completed.

“We are still gathering all the facts,” Dotson told residents.

According to police statements to the media after the incident, Cary pointed a gun at officers and ignored them when they ordered him to drop his weapon.

According to the hospital’s medical report obtained by the family, Cary had six gun-shot wounds in his back, three in his left abdomen, four in his left chest, two in his right thigh, seven in his left upper extremity and two in his left thigh/buttock.

He also had one gunshot wound on the inside of his right forearm – a location that would be easiest to hit if his hands were in the air, said Freeman Bosley Jr., the attorney representing the family. Cary was right-handed, making it more difficult to shoot his right forearm if his arm was extended to shoot a gun, Bosley said.

“I would like to see the officers off the street,” said Toni Taylor, Cary’s mother. “I don’t think you would shoot an animal 25 times.”

Meeting with the chief

On June 7, the family met with Dotson, and the St. Louis City Branch of the NAACP mediated.

Dotson told the family that he was troubled about the number of times that Cary was shot, Carlos said, and that none of the witnesses have said that Cary was pointing a gun.

“He made me really feel that we could trust him, and that he was going to do the right thing,” Carlos said. “He seems very fair.”

“He told me that it was for having tinted windows,” Taylor said. “He had not violated a law.”

The family also handed Dotson a copy of an Internal Affairs complaint that they tried to file on April 26 but were turned away.

Carlos said the Internal Affairs police officer told him and his mother that with the chain of command, the case would eventually end up on his desk anyway, “maybe a year from now.” Dotson told them this was not proper procedure.

After leaving the meeting with Dotson, Taylor received a call 10 minutes later from the same officer who had denied the compliant. He asked her to come and record her testimony at the department.

On May 1, the day of his funeral, Cary was set to receive an Emerging Scholar Award from St. Louis Community College - Forest Park, where he was studying human services and had a 3.86 grade-point average. Cary wanted to be a social worker.

“He was supposed to be at the ceremony that evening, but instead he was getting buried,” Carlos said.

Several fellow students and professors spoke at the funeral. Chris Elliot, an adjunct faculty member in the criminal justice department, told funeral attendees that in his three years teaching at the college, only two students had ever aced his test. Cary was one of them.

“He was well-liked by his classmates and his professors, and we believe he had a promising future as one who would contribute to making our community a better place,” said Jeanette Mott Oxford, executive director of the Missouri Association for Social Welfare (MASW).

On April 10, Cary attended the annual MASW Student Advocacy Day to learn about the legislative process and visited with members of the General Assembly.

“Our theme this year was Medicaid expansion, and Cary joined in MASW’s effort to convince legislators that our low-wage neighbors deserve affordable health coverage,” Oxford said.

Growing up in St. Louis, Cary was always on the honor roll, Taylor said. At Sumner High School, he competed with an Academic Olympic Bowl team until his junior year in 2004, when his family moved to Florida to help care for Taylor’s mother. Cary had never committed a crime in St. Louis. In Florida he got into trouble.

“It was a really hard time for the family,” Carlos said. “He watched my mom work so hard and struggle. He didn’t like it.”

Taylor said Cary was depressed. One month before the family was set to return to St. Louis, an older friend convinced Cary, then 17, and two others to rob several stores, including a Subway and Blockbuster, with a toy gun. Cary served three years in prison for armed robbery and returned to St. Louis in 2007.

In September 2008, Cary and three family members became innocent victims of a drive-by shooting upon leaving a store. After that, Cary suffered from post-traumatic stress disorder, Carlos said, and decided to obtain a gun, even though it is illegal for a felony offender to carry a gun.

“Cary was terrified, the way that I was,” Carlos said. “I was also innocently shot in my head in a cross fire. I didn’t get a registered gun until I was shot.”

Not long after he got the gun, Cary was pulled over by police for running a stop sign. Taylor said he was very cooperative and disclosed to police that he had a gun. The police reported it, and he served two and a half years for breaking probation back in Florida. He came back to St. Louis in May 2, 2012.

Cary’s decision to run from police on April 24 was poor judgment, Carlos said, but he never hurt anyone.

“Just because he had the gun doesn’t mean he had to die,” Bosley said.

Carlos said, “As a family, all we want is justice and for those officers to be held accountable for their actions.”

da fisherman...as it is stated in the article...Cary did not point his weapon toward the police officers...there's not one witness who can attest to that...29 shots fired can not be justified...6 shots in the back cannot be justified...the truth remains that Cary tossed the weapon before the police fired on him...this was flat out overkill and I feel that those officers should be fired from the force and brought up on charges..."wrong on every turn"??? Cary was a good young man who made a couple of bad decisions in his young life but no one deserves to die the way that he did...if you can't see the unjust in this then you're pretty much lost...

Pick your battles carefully people. This guy was wrong at every turn and the cause of his own demise. Sorry, but I know the truth hurts.