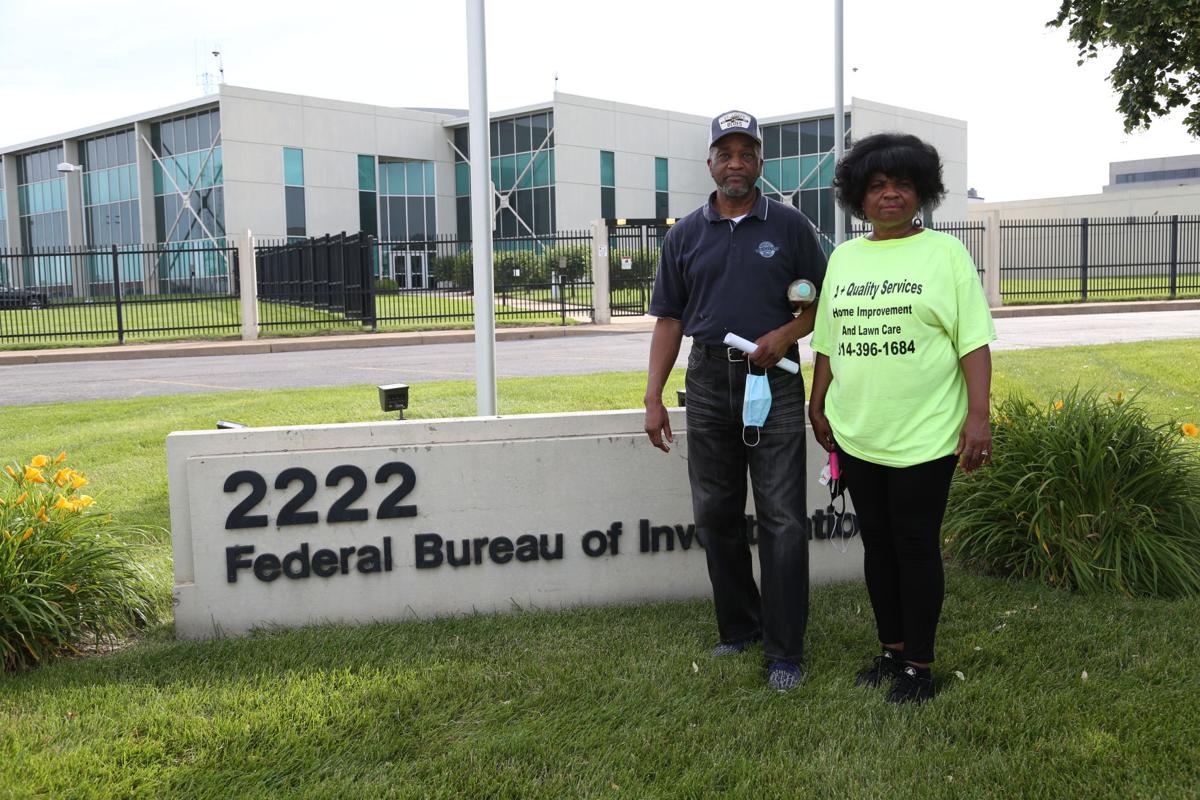 Frank and Janet Avery, parents of Ferguson activist Michael Avery, decry the federal detainment of their son without bond, at a press conference on June 5 in front of the F.B.I. main office in St. Louis city. Michael is charged with allegedly inciting a riot through his Facebook posts. 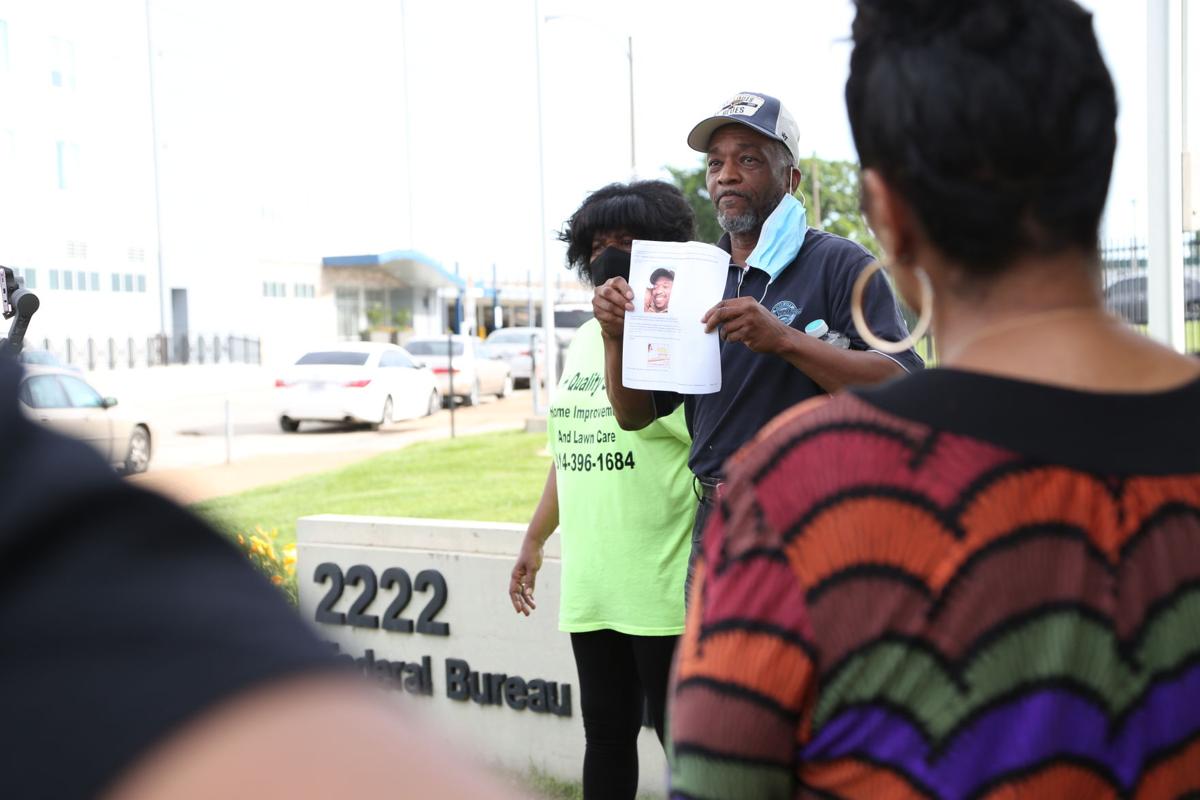 Frank and Janet Avery, parents of Ferguson activist Michael Avery, decry the federal detainment of their son without bond, at a press conference on June 5 in front of the F.B.I. main office in St. Louis city. Michael is charged with allegedly inciting a riot through his Facebook posts.

Jerome Baker, 28, was getting ready to take his six children to Six Flags in May of 2016. He went to borrow a car from a friend and never returned.

For about three months, Michael Avery — a volunteer with the grassroots group Bring Them Home Search and Rescue — helped Baker’s mother search for her son.

“He went with me when I couldn’t get no other search team to go,” said Maurnice Baker, Jerome’s mother.

Since 2015, Avery has been working with the group of about 25 volunteers to help find missing children and people. They have been able to find about 100 individuals. According to a St. Louis Metropolitan Police spokeswoman, the police department only has one detective dedicated to missing persons investigations.

Baker was among community members and leaders who spoke out against Avery’s recent arrest for allegedly inciting a riot at a press conference on Monday, June 5. Avery is a Ferguson activist who participated in recent demonstrations in both St. Louis and Minneapolis to protest the police killing of George Floyd. On Sunday, May 31, FBI agents arrested Avery at his home in front of his 3-year-old daughter, parents and other family members. The charges against him are based on the federal government’s interpretation of Avery’s Facebook posts, according to the criminal complaint. Avery is being detained without bail in Crawford County.

Avery often leads the missing-person search teams, making sure vacant buildings are secure before they enter them, Baker said.

“We have three or four open cases this week, and we can’t even go out right now because he’s the one that teaches us how to clear the houses,” Baker said. “So, right now, we’re lost. He is the lead of our foot soldiers. We need him here so he can bring these babies home.”

During Avery’s detention hearing on June 3, a representative of the U.S. Attorney’s Office Eastern District of Missouri told U.S. Magistrate Patricia Cohen that Avery “had no community ties of any kind to St. Louis.” The representative alleged that Avery doesn’t live in St. Louis, and he “traveled from out of state for the sole purpose” of inciting riots. Avery is allegedly a danger to the community, poses a risk of flight because of his interstate travel and needs to remain in jail.

Judge Cohen said she will assess both sides and make a decision by June 12 about whether or not Avery should remain detained.

Marlene Suarez, Avery’s attorney, said she is fighting hard against the federal government’s claim that he’s a danger to the community.

“This young man is nothing but an asset to this community,” Suarez said. “He is no danger to anybody — maybe he’s a danger to the status quo.”

According to the criminal complaint, Avery attended and livestreamed protests in Minneapolis and allegedly gave directions to “St. Louis activists” on how to loot businesses. In some posts, Avery called for a “red alert” or “red action” in St. Louis.

“The FBI assesses level RED ACTION to be associated with a high level of violence,” according to the complaint.

Suarez, along with several prominent activists, said these are not “code words” for violence and the federal government has “completely mischaracterized” his Facebook posts. There is no evidence that Avery committed any crime, Suarez said, and he was just reporting on what he saw in Minneapolis, not instructing.

“They are trampling on his First Amendment, constitutional rights,” Suarez said. “This case is much bigger than Mike Avery, but unfortunately he’s the one who is suffering for it. By prosecuting him, they are prosecuting this entire movement here in St. Louis.”

Upon leaving Minneapolis on May 30, Avery wrote on Facebook, “Anybody in STL interested in being a part of a level RED ACTION AND CAN BE AVAILABLE SATURDAY NIGHT PLEASE INBOX ME BEFORE I LEAVE MN.”

Ferguson frontliner Cori Bush told The American that she would read that to mean: be ready to go.

“During Ferguson, you didn’t have to look for the protest, you just showed up,” said Bush, who is also a nurse. “Since then, we’ve started to plan the protests. To me, that means we can’t take two weeks to plan an action.”

“Red action” is not a code word for violence, Bush said, and his other posts were also misinterpreted.

“Mike Avery has never been a violent person,” Bush said. “He’s a peacekeeper.”

An online petition circulating to “#FreeMikeAvery” has almost 2,500 signatures. Alderwoman Megan Ellyia Green (D-Ward 15) and three pastors also spoke in support of Avery, talking about how he has mentored and employed youth through his construction and lawn service business. One of the young men that Avery has mentored is Jerome Baker’s son.

Janet Avery, Michael’s mother, said he breaks even with his business because he’s constantly hiring the youth he mentors and paying them well. Michael currently lives with his parents. When the FBI came to arrest him, the family was outside washing their cars, she said. He was arrested in front of his 3-year-old daughter.

“I don’t think nobody seeing the video understands the dramatic incident of this because there was a line of cars coming down the street and they had 30 FBI agents,” she said.

The fact that the FBI knew where to find Michael shows that the federal government knows he lives in St. Louis, Suarez said, despite telling the federal judge otherwise.

Frank Avery, Michael’s father, said the U.S. Attorney’s representative told a federal judge “a whole bunch of lies” to make sure he stayed in jail. His family hasn’t spoken with Michael in three days, he said, and they don’t understand why he can’t get a bond.

“Four police officers can murder a man in broad daylight, for everyone to see on video,” Frank Avery said, “and within 24 hours, they turn themselves in and they get a bond.”

Ferguson activist Mike Avery — who had just returned from protests in Minneapolis — was arrested at his St. Louis County home in front of his …