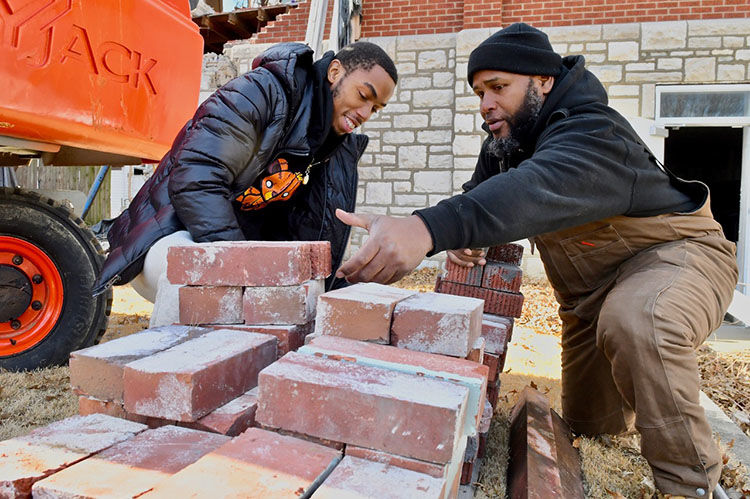 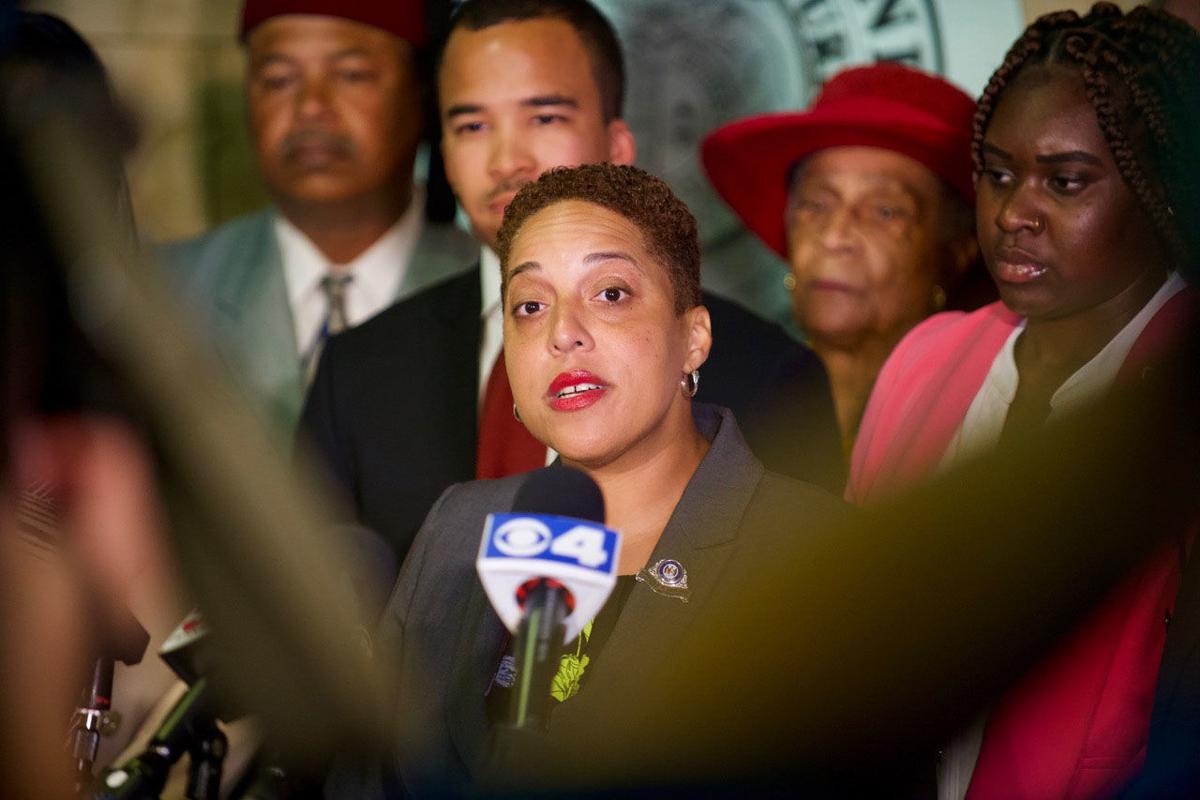 The weekend before Christmas, 20-year-old Gabriel Lockett sat in the back of a long tow-truck bed — in front of six life-sized, lit-up reindeers. His mentor, Darren Seals, dressed up as Santa and sat in a sleigh, ringing a bell.

Lockett’s job as one of Santa’s elves was to hand out presents to children throughout the Walnut Park neighborhood in North St. Louis.

“I got a good feeling from it, seeing the smiles on children’s faces,” said Lockett, who regularly does community service with Seals’ Sankofa Unity Center and mentoring program in Walnut Park.

Almost two years ago, Lockett was a high-school senior at Lutheran High School South in Affton when he ended up in jail one night in March 2018.

Although his high school was in South St. Louis County, Lockett lives just north of downtown St. Louis. One night, he was on the porch of a friend’s house in his neighborhood, acting too loud and doing “teenager things” when the police showed up, according to Lockett. The officers said they had probable cause to search the house, and they found two illegal guns in a closet. There were children asleep in the house, and Lockett was accused of being the person who hid the guns in the closet, according to Lockett’s attorney Mark Hammer.

Seals, who is a part of St. Louis Circuit Attorney Kimberly Gardner’s diversion team, reached out to Lockett and told him that he might be able to get the charge dismissed if he made it through a rigorous yearlong felony redirect program.

“The reason why diversion was offered was because my client doesn’t have any criminal history and he was young,” Hammer said. “For him to be convicted of a felony would label him and decrease his opportunity for the rest of his life. What Kim Gardner is doing is providing a select group of individuals to have another chance.”

Lockett lives in an area where it’s nearly impossible not to be close to guns, Hammer said, and it was deemed that he was not a danger to his community.

Part of the diversion process meant being accountable to Seals at all times and having a strict schedule. Lockett said he actually doesn’t mind being under Seals’ constant watch because he now feels like he has a father figure in his life for the first time.

“I used to just be able to do whatever I wanted, whenever I wanted to,” Lockett said. “But I feel like now that I’ve got people that actually care and they want to see me doing better in the community that I live in. Channeling my time is way better than me just having free time.”

The felony redirect program is part of the circuit attorney’s diversion program, which is meant to address the harm caused by mass incarceration and decrease crime. In 2019 alone, there were 241 people accepted in the misdemeanor or felony redirect program and 149 people who completed it. The diversion program is part of Gardner’s Justice 2020 initiative to reform — or, as she says, “tear down” — the system.

“We have to stop having this rhetoric that we’re going to be able to lock our way out of this, prosecute our way out of this,” Gardner said. “That simply cannot be our strategy for crime reduction. It does not work. And we have not been successful.”

The average cost to incarcerate a person in a St. Louis jail is $31,543, according to Gardner. A year of diversion is 95 percent less expensive than a year in jail, she said. The program is based on those in similarly situated cities, she said, including Milwaukee — where the recidivism for diversion participants was less than 3 percent.

“We have to look at how we stop the cycle of victimization,” Gardner said. “You are a victim today, perpetrator tomorrow. Our prosecutor-led diversion solutions work.”

The felony redirect program was designed by experts from Washington University, Florida State University and St. Louis University. It allows nonviolent felony offenders with little or no criminal history to enter an intensive regimen of behavioral therapy, classes in life skills, job training and employment, and community service in order to redirect the offender out of the criminal justice system.

In 2017, Alexis McCain, then 23 and working as a pharmaceutical technician, was in the wrong place at the wrong time, she said, and landed a second-degree felony assault charge.

“That was my first time getting locked up, first charge ever,” McCain said, “and for that being on my record forever, it would have stopped me from having good opportunities.”

Going through the diversion classes changed how she viewed life, she said.

“You have so many conversations that people are afraid to talk about,” McCain said. “In that class, you can express yourself with people that deal with the same things. It gave me a different opportunity to look at life.”

The redirect program is just one of the initiatives under Gardner’s diversion umbrella. There is also the opioid addiction education program, which allows people who are low-level offenders and not eligible for the 22nd Circuit’s Treatment Court (formerly Drug Court) to go through a four-week supervised course on drug safety. The program was designed by Dr. Kanika Turner, a physician at Family Care Health Center, and in partnership with the University of Missouri – St. Louis (UMSL).

“We found that if you give individuals more options, they feel like they have control of their life, and they’re more likely to seek outside community-based treatment,” Gardner said. “We have just as many deaths from opioids as murders. And that’s not been addressed.”

Diversion participants are receiving trauma-informed counseling. The office is also providing services to victims, and more than 4,000 people have been touched by the victim services unit. The circuit attorney partners with SLATE to offer job training and other agencies to offer general health care needs.

“Being a prosecutor and a nurse, I understand those root causes of how we address the criminal justice system,” Gardner said. “It’s the failed system of healthcare, failed systems of education, economics — and that field drives the criminal justice system. If a person is committing crimes because they have a mental health crisis, and we’re thinking locking someone up is going to help them with this crisis, it doesn’t.”

Gardner’s diversion programs have been met with resistance from select judges in the 22nd Circuit Court, she said.

The trainers for Gardner’s opioid education class were being compensated through the State Targeted Response Grant, for which the Missouri Department of Mental Health (DMH) is a grantee. According to emails obtained by The St. Louis American through a Sunshine Law request, Circuit Judge James E. Sullivan, who is a former Drug Court Commissioner, expressed his concerns to DMH leaders about the program. The department ceased funding for the drug education program for four months while investigating Sullivan’s claims. The department ended up reinstating funding after finding that the program was effective and rooted in evidence-based practices, Gardner said.

In response, Sullivan told the American in a statement, “The Circuit Attorney's opioid addiction education program in early 2018 was a four-part, 10-hour education program, which, if attended by the defendant, would cause the Circuit Attorney to dismiss the case against the participant. The program when initiated had no requirement for any type of screening to determine whether the participant was an addict or an abuser of a drug — a significant distinction in that evidenced-based practices indicate that education alone will not assist an addict in acquiring the necessary tools for abstinence. DMH contacted the court as to those concerns.”

Gardner responded to Sullivan’s statement, saying that the participants have always been screened, and experts created the program using evidence-based practices.

“We’re going to depend on the experts who are committed to the intellect that goes into the success of these programs to develop the content and the procedures,” Gardner said.

The same judge spoke harshly about the felony and misdemeanor redirect program, according to Gardner, saying that it should be run under the Treatment Court, which is a court-run alternative, versus a prosecutor-led initiative. Sullivan was the judge designated to hearing the diversion cases, but he stopped agreeing to accept the cases for about six months because of a disagreement about policies and procedures, Gardner said. The cases that were started under the redirect program ended up having to go through the standard prosecution process during this time period, she said.

“It was a whisper campaign that was actively in the courthouse, basically stopping judges from even wanting to take the diversion program,” Gardner said.

The problem is more about the overall fight to protect the status quo than the actions of the individual judges, she said. Gardner eventually found a supporter in Judge Paula Perkins Bryant, who agreed to hear her diversion cases.

Sullivan denied that there was a six-month standstill in the redirect program, as well as the claim that he or other judges lack support.

“There are individuals in our community who only need a hand up,” said Rev. Linden Bouie, pastor of the Zion Travelers Missionary Baptist Church.

In the redirect program, the diversion team does an assessment of all cases to see who qualifies for the program. But Seals and other mentors are ex-convicts, who have experience with the streets, and they do their own assessments of the potential participants.

“Once he comes to me, I’ll try to figure him out,” Seals said. “The first conversation, I can know if I can work with him. My assessment is strictly from the streets. Is your father in your life? I’ll try to figure out the pattern from a generational curse to say, ‘Okay, how many uncles you’ve got in jail? How many friends you got dead?’”

The next step is to test them, Seals said. He’ll call them at 12 p.m. on a Saturday and ask for help with some of the projects at the Sankofa Unity Center, a mentoring program he established three years ago in the Walnut Park neighborhood.

“And if he shows up, then I know he wants my help,” Seals said. “I try to give every kid a shot. When I got my felony, there was no diversion programs. Even though I was trying to change and I was a hard-working person, but that box affected me,” meaning the felony box on job application forms.

When Lockett comes to the Circuit Attorney’s Office, he typically goes to see Seals.

“I feel like it’s someone that’s been through the same thing I’ve been through,” Lockett said. “And he actually understands what can possibly happen and how we probably feel about the situation. So I feel like he’s a great person to have in this system.”

Lockett has seen a lot of people grow through this program and has seen three people graduate, which motivates him.

But it’s not easy.

“Miss Gardner, she doesn’t play,” Lockett said. “I appreciate that she doesn’t play like that because it’s going to make a lot of people change their decisions in their life.”