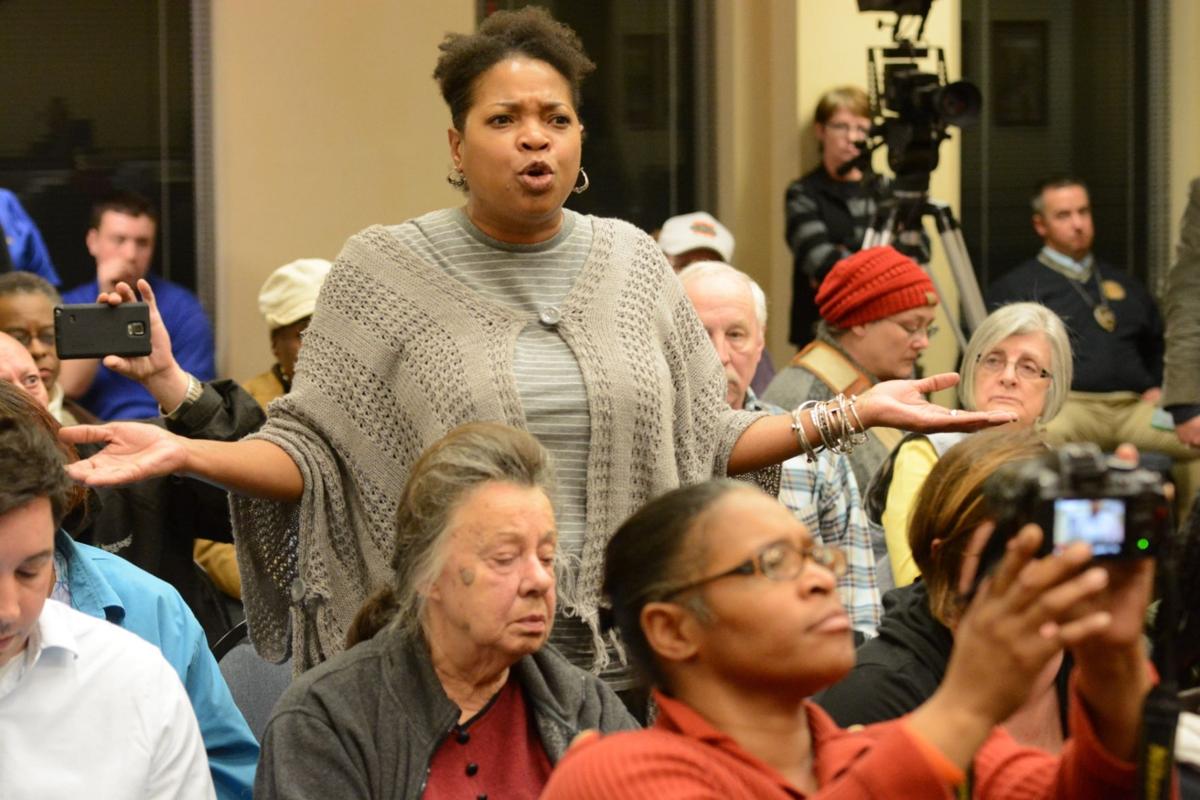 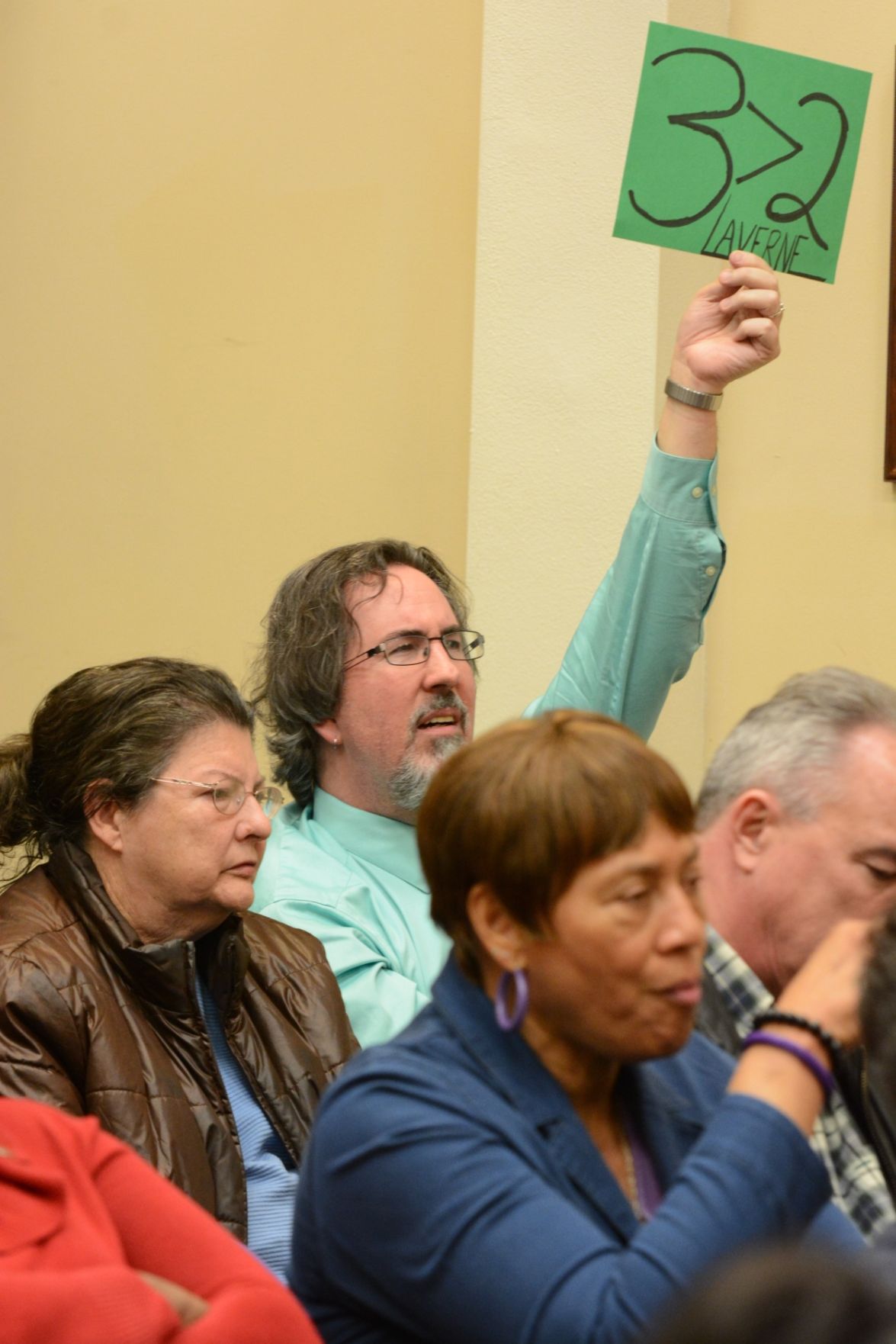 Ferguson resident John Powell protest the vote to put in candidate Laverne Mitchom in a 3 to 2 vote in favor but did not during Tuesday night's Ferguson city council meeting at city hall.

Ferguson resident John Powell protest the vote to put in candidate Laverne Mitchom in a 3 to 2 vote in favor but did not during Tuesday night's Ferguson city council meeting at city hall.

Over 100 citizens filled the Ferguson City Council chamber on Tuesday, February 2 as dozens of residents stood outside anticipating a chance to tell city government their thoughts on the proposed Department of Justice consent decree.

“Every African American that talked about the consent decree tonight was in favor to sign it,” said Mildred Clines, 58, a member of the Ferguson Police Task Force. “The majority of all the white people were against it. The racial divide is still here. Many people here don’t experience the disparity that we experience.”

Last week, the city released a draft of its consent decree with the DOJ. Under this agreement, the city would undergo major changes to its municipal code and police force, requiring massive amounts of new training and oversight. Among many other changes, Ferguson would be compelled to help form resident associations at high-density apartment complexes like Canfield Green Apartments, the first center of protests after Michael Brown Jr. was killed there. A monitor would oversee and report on its progress.

The monitor would be agreed to by Ferguson and the DOJ and paid for by Ferguson. Between the new police training and the monitor, the consent decree would cost the city $1.5 million a year, according to its city manager. Unless the court decided the terms of the agreement are met earlier, Ferguson would be monitored for five years.

Many of the older white residents at the meeting encouraged the council to vote against the decree because of the costs and “unrealistic requirements.”

Ralph “Ank” Ankenbrand, 76, is a  40-year Ferguson resident. While wearing an “I love Ferguson” T-shirt, he suggested that the city reject the decree and take its chances in court and “perhaps the real truth would come out.”

Ankenbrand’s comments were met with laughter from decree supporters.

“Money never becomes an issue until it involves justice for all people,” said Charlee Johnson, 65. “Just sign this doggone thing. Make a way. Do the right thing and you never have to worry about this.”

Much of the city’s revenue that would be spent on the consent decree was raised through aggressive ticketing strategies (“taxation by citation”) revealed in the DOJ report that led to federal supervision of the municipality.

“They opened the books to this town and found out how much you were making off all these citizens and the means in which you were getting it,” Rosalind Hagedorn, 36-year Ferguson resident, said at the meeting.

One 52-year-old white female Ferguson resident, who wished not to be named, told The American that she is willing to pay higher taxes to fund the consent decree because it’s “worth it” for the city to get past this crisis. Even this white consent decree supporter said she was “tired of talking about race.”

Many residents are trouble by the council’s vote for a new city council member to replace Brian Fletcher, who died on January 10. Last week, all three of the black council members voted on Laverne Mitchom to fill Fletcher’s seat, giving a 3:2 majority vote.

At Tuesday’s public meeting, Mitchom was not sworn in. Instead, Ferguson’s city attorney Stephanie Karr said the council needed a supermajority 4:1 vote.

Residents protested. People held up signs that read “3:2” and “Stop the Karr-uption.”

“What’s up with the supermajority?” Pulliam told The American. “How does the city attorney make a ruling? She’s not the judge. She can offer an opinion. I’m so sick of this foolishness. They just make it up as they go along.”

The ACLU sent a letter to Karr on January 28 stating that she was “blocking” Mitchom from being sworn into office. With five members remaining on the council, a vote of three constitutes a simple majority and should suffice to install Mitchom in office.

“The community will benefit from a decision to follow the law without the necessity of a court order to do so,” the ACLU threatened – with an obvious allusion to the DOJ consent decree designed to force Ferguson to follow federal law.

There are two more public comment hearings before the final vote next week: 10 a.m. Saturday, February 6 at Ferguson Community Center, 1050 Smith Ave.; and 7 p.m. Tuesday, February 9 at City Hall. The bill will be read for a second time and voted on at the City Council meeting on February 9.

The story is published as part of a partnership between The St. Louis American and the Huffington Post.