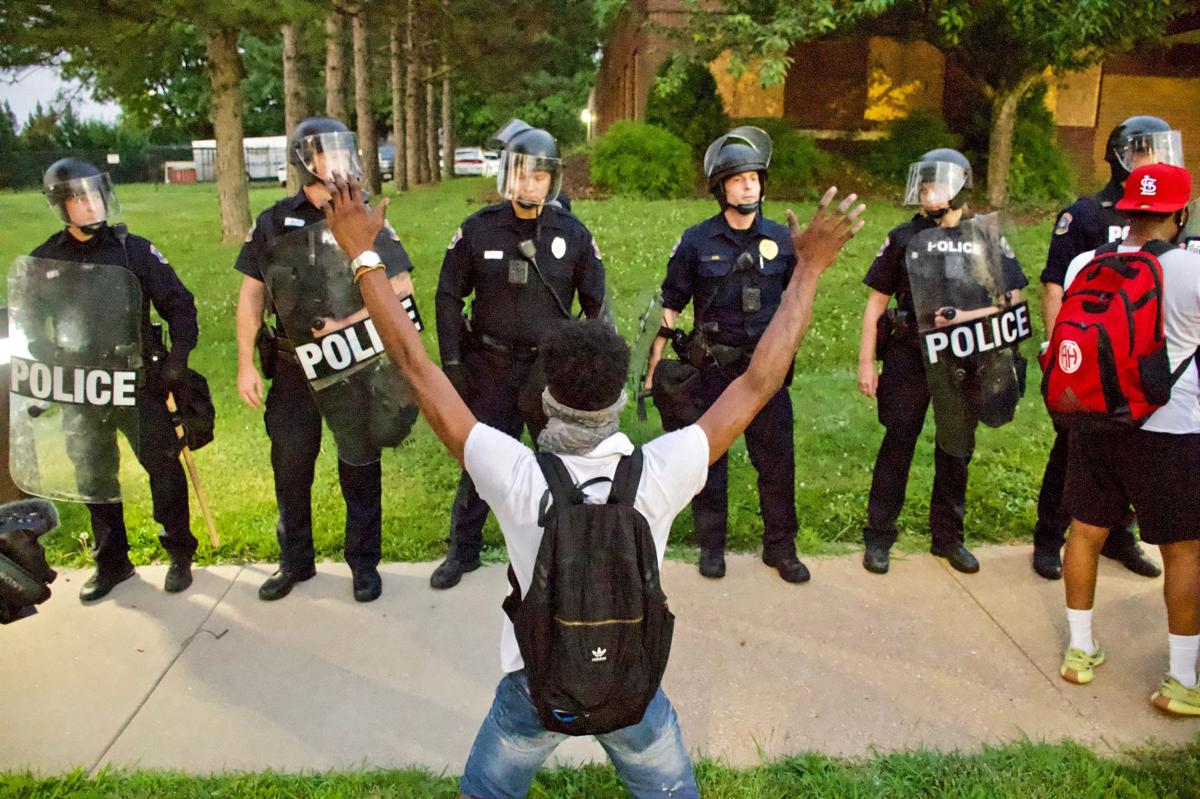 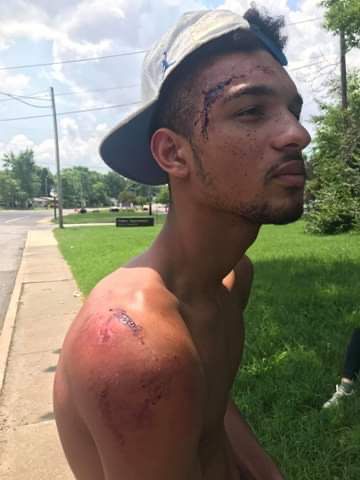 19-year-old Elijah Foggy was among those arrested during a protest at the Florissant Police Department on Sunday, July 5.

19-year-old Elijah Foggy was among those arrested during a protest at the Florissant Police Department on Sunday, July 5.

Elijah Foggy, 19, was injured by Florissant Police officers on Sunday, July 5 during a protest action organized by Expect Us. He sustained lacerations to his face, arm and leg from the police officers who arrested him. That was after he was doused with mace.

Foggy said the police officers came for him by name after he had retreated from Florissant Police Department property as ordered.

“One officer came up and was like, ‘Come on, Elijah; come on, Elijah,’” Foggy said. “He was taunting me, trying to get me riled up. I didn’t know there were officers who were sneaking up behind me to do a sneak attack.”

Foggy has been photographed and identified by name while leading recent protest actions.

Foggy said that four officers pushed him to the ground and pinned him there. “They dragged my head into the concrete – literally,” he said. “That’s why I have that big gash on my forehead. Another person had his knee on my back. When they were trying to turn me over, I was complying.”

Florissant Police said that Foggy had to be restrained because he resisted arrest after ignoring an order to disperse, but that his head was not dragged on the pavement. Foggy “was not wearing a shirt, so more of his skin than normal made contact with the pavement,” a police spokesman said. He was provided medical attention after his arrest, the police claimed.

The police spokesman explained the use of Foggy’s name by saying officers “have frequently heard him called his name over the past month as they have been in close contact with each other along the protest line.”

Florissant police arrested 17 people on Sunday night and maced the majority of the group. Many protestors were bruised by batons, and several of those arrested were shoved face-first onto the ground.

“I was drenched in pepper spray and hit with a baton when police rushed non-violent protesters,” said Rev. Darryl Gray, an Expect Us organizer. “Medics trying to assist injured protestors were tear gassed.”

In a social media post, the Florissant Police Department stated that several protestors committed property damage and threw various objects at the police.

“At no time were police threatened nor did they come under attack in any way,” Gray said. “The police called writing on two pieces of plywood ‘destruction of property’ and used that as a reason to viciously attack protestors.”

During the action, protestors scribbled messages like “ACAB” and “BLACK LIVES MATTER” on particle board covering the Florissant Police Department’s windows. Within a few minutes, police in riot gear emerged from the building and pushed protestors back. An order to disperse was issued at approximately 8:45 p.m., and then officers began to arrest protestors, pushing the group back out onto Lindbergh Boulevard with batons and mace.

Expect Us organizers had warned the diverse group of protestors that this would be a “code red” action – meaning that the risk of arrest would be high. Organizers Gray, state Rep. Rasheen Aldridge (D-St. Louis), Ohun Ashe, and Cori Bush told people that they were welcome to leave at any point if they felt unsafe. Instructed by Aldridge, everyone wrote a jail support number on their arms or in their phone contacts.

“We all know folks that have been arrested by Hazelwood, by Florissant, and been mistreated,” Bush said. “Think about what you’re willing to lose. Being a part of this particular action, or any action, what are you willing to put on the line? Are you willing to have your name smeared, your reputation questioned, lose your job? What is a Black life really worth to you?”

This action came after nearly a month of protests of the Florissant Police after then-detective Joshua Smith drove his unmarked police SUV into a Black man and then exited the vehicle to kick and beat him. Protesters with a different organization, Respect Us, have organized the majority of these actions.

Smith has been fired and charged with first-degree assault, assault in the fourth degree, and armed criminal action, while the two other officers who were with him in the SUV have been allowed to remain at their posts.

The marchers on Sunday night repeated calls to defund the police heard across the nation, along with a demand for every police shooting to be independently reviewed. The police responded with behavior that now demands its own independent review for misconduct and unnecessary use of force, organizers said.

“There can be no real police reform,” Gray said, “as long as police officers continue to conduct themselves as thugs.”

Ferguson Police said it will perform a routine use-of-force internal organization investigation, though Foggy had not filed a complaint.