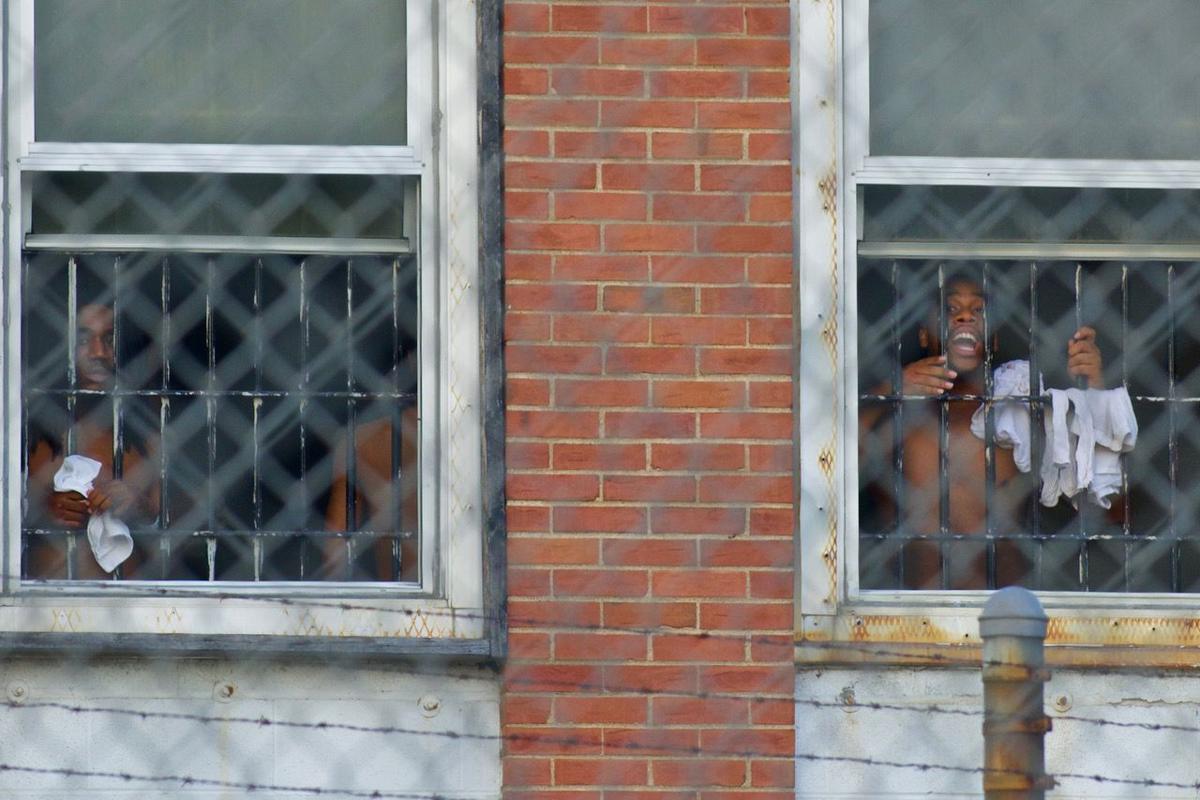 Inmates of St. Louis’ Medium Security Institution, otherwise known as the Workhouse, rallied from the inside along with citizens protesting their being detained pre-trial in a jail without air conditioning on Friday, July 21, 2017. 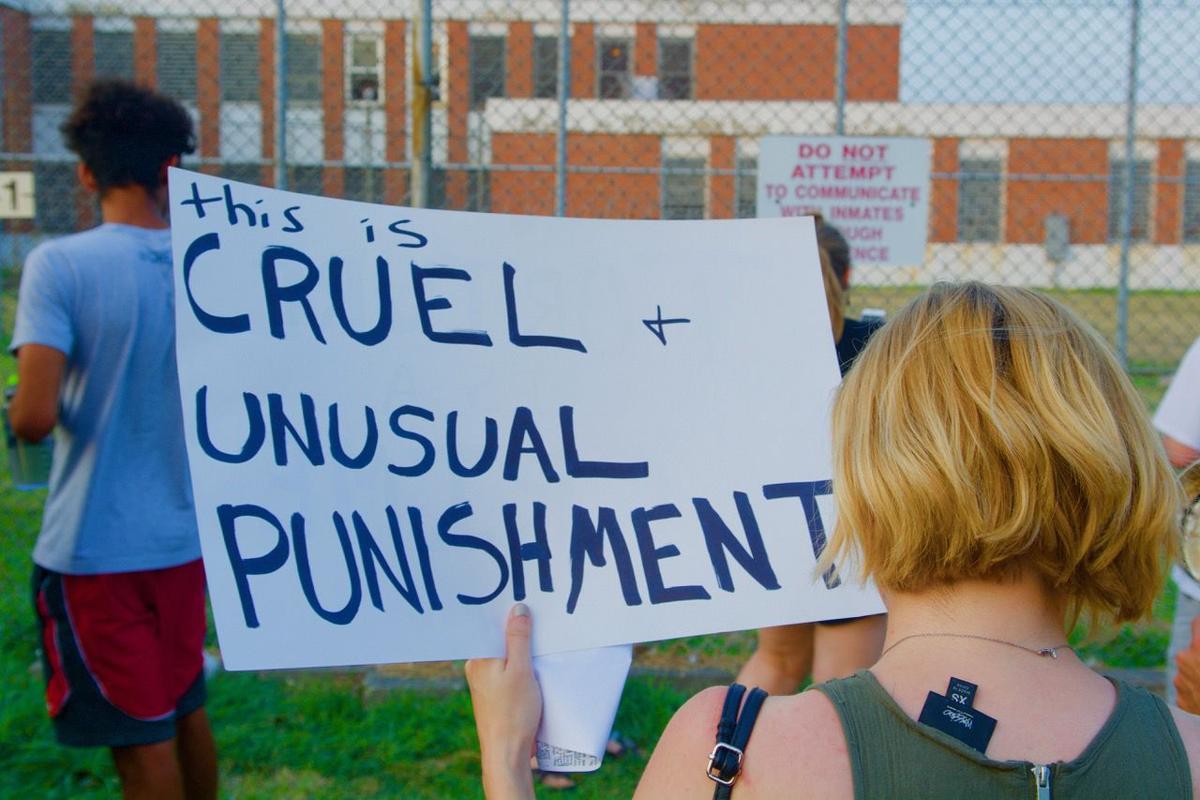 Margaret Sherer displaying her displeasure with the living conditions in the City Workhouse.

For inmates of St. Louis’ Medium Security Institution, otherwise known as the Workhouse, this past week’s heat wave has been unbearable. With no air conditioning in most sections of the facility, when temperatures went over 100 degrees outside, things got even worse inside –reportedly up to 115 degrees. Dozens of desperate inmates took to their windows for help, screaming that the conditions inside the jail were unbearable.

Matt Brown, 34, who was released from the Workhouse last Friday after one and a half months in jail for a parole violation, said many inmates attempted to get sent to solitary confinement, or “the hole,” to escape the heat. That’s “the only place that has air conditioning” that they were able to access, he said.

In their desperation for cooler air, Brown said, “We wouldn't listen, you know, just talk back, wouldn't follow orders. People were fighting, and did whatever we had to do for them to send us to the hole.”

Even getting a drink of cool water, he said, could be a fight.

“It was survival of the fittest in there, you know?” he said. “They’d bring one cooler in the mornings around 9, and they’d bring one at maybe 3:30, 4 in the evening. There's like 70 people in a dorm, and they wouldn't police it - they wouldn't have people get in a line, they wouldn't make sure everyone had some. They would just set it in there and have us fend for ourselves to get it if we can.”

Conditions in the jail were such that, according to Brown, “there were fights over everything, even trying to get in the shower.”

The inmates themselves broke the story of the Workhouse, after a video circulated of inmates waving towels out their windows and pleading for help. “Help us!” begged a man. “We have no A/C! We need clean water!” The video was posted to Facebook and resulted in public concern and outrage.

On Friday, July 21, some 200 protesters gathered in front of the jail on Hall Street to demand that the inmates be released or relocated until the living situation inside the jail improved.

Demonstrators carried signs condemning the jail system and shouted, “No justice, no peace! Free them from the heat!” As the protesters chanted, people could be seen silhouetted inside the jail windows, watching and chanting back.

“I’m here today because making a mistake does not mean you do not deserve human dignity,” said protester Mahina Nightsage. “A lot of people inside there have not even been convicted of a crime yet, but they are being denied basic necessities.”

Many others echoed her concern about the conditions of the jail, and about what they believed to be gross neglect by city and state officials.

State Senator Jamilah Nasheed (D-St. Louis) was on the scene to show her constituents that there were people in government who heard their concerns and cared.

“The people in my district are upset and outraged,” Nasheed said. “They do not understand why these people, some who haven’t even been convicted, have to endure such harsh conditions. They want to see these people treated humanely, and so do I."

Mayor Lyda Krewson issued a statement on Friday that lay blame at the feet of city voters. “In 2015, city voters rejected a bond issue that would have funded infrastructure improvements throughout the city, including installing air conditioning at MSI,” she stated.

Tension at Friday’s protest was still extremely high. Protesters joined together to shake the outer fence at the jail. Some even found a way under the fence and gained access to the jail grounds. As they did so, dozens of policemen gathered, some in riot gear.

Chontol Calvin, who was pepper-sprayed along with two friends, stated that the protest “was never violent. We were just banging pots and yelling. There was no rhyme or reason for riot police to be there. It felt antagonistic. We were nonviolent.”

The next night, protesters came back to the jail. That time, however, the police brought out batons and tear gas earlier in the evening – by 8 p.m. – and arrested three protesters: two adult Saint Louis University students, Amelia Jade Maxwell and Wesley Schnitker, and one minor.

By Monday, temporary air conditioning units were being installed, as promised by Krewson’s office. Aldermanic President Lewis Reed had first suggested this solution in a letter to the city’s Corrections Division on July 19, two days before the first protest.

But, for many activists, this small concession to the threat of continued protest didn’t fix the larger issue of conditions at the Workhouse.

The jail housed around 770 inmates at the time of the last census in June – despite a 1990 District Court order that the maximum number of people incarcerated there should be 481. According to St. Louis city data from last June, about 98 percent of those imprisoned are pre-trial, meaning they have not yet been convicted of any crime and are being held because they could not afford to post bail.

Unacceptable conditions in the jail have been a matter of public record for decades. Judge Clyde S. Cahill decried those conditions in his since-disregarded 1990 judicial order stipulating a maximum number of inmates and other improvements in upkeep. A 2009 report by the ACLU of Eastern Missouri (to which The St. Louis American contributed) revealed squalid conditions and abuse by corrections officers and other inmates. Jeff Rainford, chief of staff for then-Mayor Francis G. Slay, responded by saying that jail “was not supposed to be Shangri-la.”

In state and federal prisons, there are laws governing the upkeep of facilities. The Workhouse, which is owned and operated by the St. Louis Division of Corrections, is excluded from these mandates.

“They need a new facility,” said Nicole Nelson, staff attorney at ArchCity Defenders. “This is not a humane place that anyone should live.”

ArchCity Defenders, along with the nonprofit Action Council St. Louis, worked to bail out as many people as possible from the Workhouse during the heat wave, and were able to pay bail for 16 people accused of nonviolent crimes by July 22.

Kayla Reed, one of the main organizers of the bailout action, said the Workhouse is among several facilities that were built to house black people – and that’s still true today.

“With 700 people in the Workhouse, we got 100 emails from people’s wives and parents,” Reed said. “We want to organize those people and put them in front of the mayor, Board of Aldermen, circuit attorney, so we can ask: Why are we holding people in jail on $200 bonds? That conversation needs to be created, and elected officials need to be held accountable to a response.”

Beyond bail reform and the temporary air conditioning units, several other solutions have been proposed. State Rep. Joshua Peters (D-St. Louis) sent a letter to Missouri House Speaker Todd Richardson asking him to create a special committee “to examine and investigate these concerns and to receive testimony as they pertain to the condition of the Workhouse.”

St. Louis Treasurer Tishaura Jones made the Workhouse a campaign issue in her bid for mayor, which she narrowly lost to Krewson in March. She said that the next step is to “look through the people who are in the Workhouse who have not been on trial, and then release them on their own recognizance,” as an alternative to the cash bail program that keeps so many incarcerated there.

Though the most recent list of charges for which people are being held in the Workhouse include more than 100 people being held for alleged possession of a controlled substance, more serious charges of detainees include armed alleged criminal action, child abuse, kidnapping 2nd degree, elderly abuse and failure to register as a sex offender.

Jones called for the circuit attorney to investigate Workhouse conditions, and suggested that funding used to keep people in the jail should be re-directed to rehabilitation and reentry programs for less-serious offenders.

“Because people shouldn’t be in jail for being black, poor, on drugs,” Jones said. She pointed out that almost 1,200 of about 1,500 people being held in the Workhouse and the City Justice Center are black men.

A spokesperson for Circuit Attorney Kimberly Gardner said that unless there is a criminal case to be made, the circuit attorney can’t investigate the Workhouse as an institution: “That’s the purview of City Hall.”

sharing my thoughts on the city jail. this is horrible to have people in there without air. I bet if it was some animals they would have air and good food too. People stop being afraid and speak out. Guards, etc don't be afraid

Who of you by worrying?

Pandemic task force head Dr. Alex Garza: ‘It’s not going to slow down until everyone steps up'