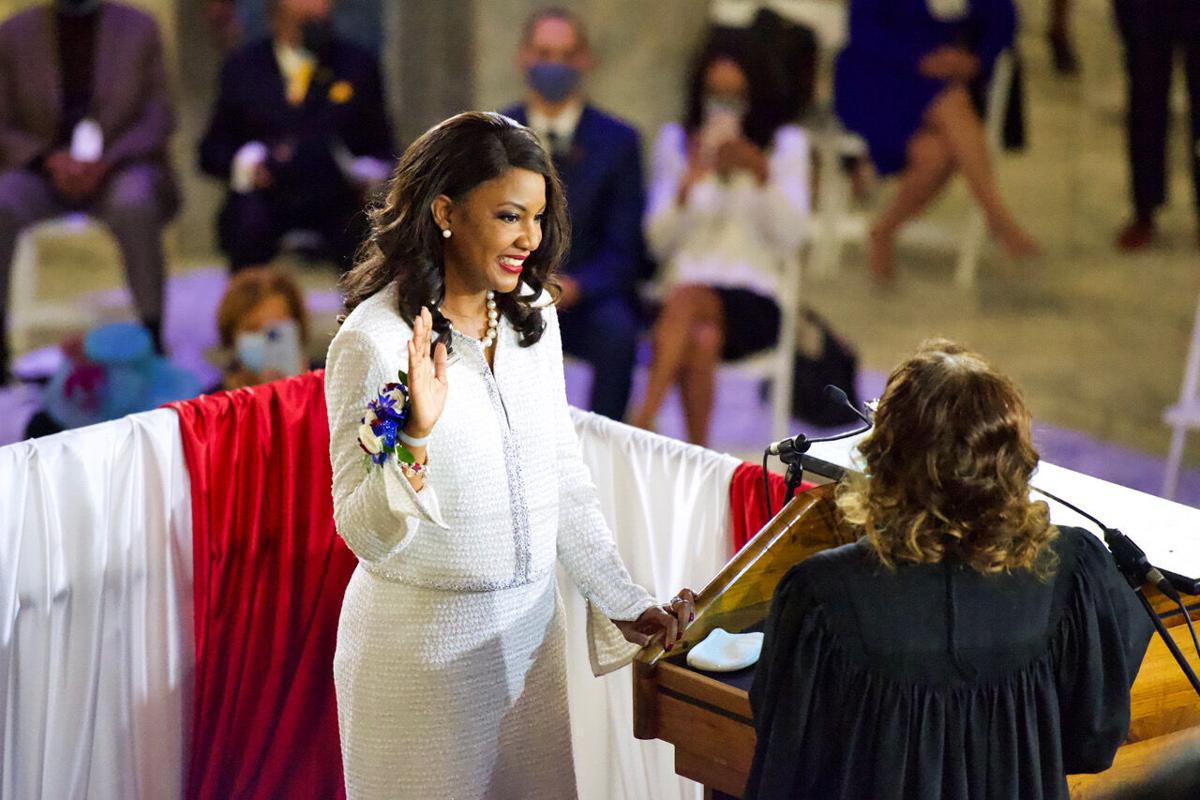 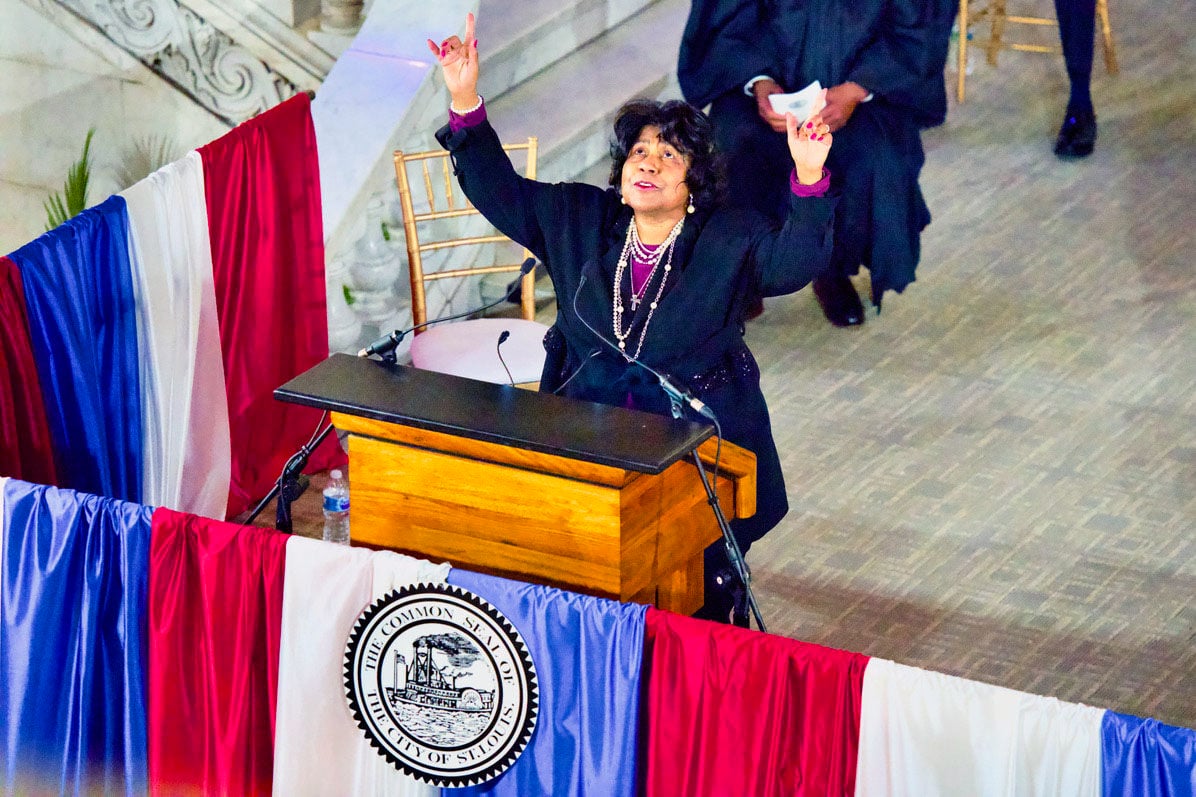 Tishaura Jones stood at a podium in the middle of City Hall’s rotunda, surrounded by her family and invited guests as she took the oath of office — becoming St. Louis’ first Black female mayor.

“I am standing on stone that was not meant for me, I am speaking in a rotunda that never envisioned my ascent to mayor, I am going to walk into an office that my ancestors could have never imagined me working in — but I’m here,” Jones said.

In her speech, she paid homage to her family, the schools she attended and her Delta Sigma Theta Sorority — whose members lined the staircase dressed in red.

“But most importantly I’m here today because of you, because you voted, because you got involved, because you chose to be inspired by a movement of people and vision for St. Louis to move our city and region forward,” Jones said.

We will move forward when we recognize our shared humanity, our shared core desires, and our common resolve to make our city a better, safer and healthier place to live.” - Mayor Tishaura Jones

Jones pledged to be a mayor for every city resident, whether they voted for her or not.

“Most St. Louisans share some core desires and as a single mom I know these desires well myself,” she said. “I want to raise my son in a safe neighborhood. I want him to receive a quality education. I want him to be able to envision himself safely raising a family in St. Louis one day.”

Jones said she was resolved to make change.

“To transform our city and to transform our approach to safety,” the new mayor said. “I stand ready to begin putting equity for people, not equity for wealthy developers, at the center of our plan for development.”

Jones said she was dedicated to address the lack of opportunity for the city’s most vulnerable, a broken criminal justice system and a fractured region.

“Decades of problems will not be solved by days or months of solutions … sometimes, when addressing an incredible challenge, it takes six months to see progress and a year to see real change.”

She said once the city realizes that the success of all communities is linked, the region will move forward.

“We will move forward when we recognize our shared humanity, our shared core desires, and our common resolve to make our city a better, safer and healthier place to live,” she said.

“St. Louis, there is a challenge before us, but I know that together we will solve it,” she said. “The forces of good will always shut down and shut out the forces of evil. Light will drive out darkness, love will overcome hate — I’m ready to get to work.”

Fredrecka McGlown, CEO and Founder of Black Girl Millennial World, served as the mistress of Ceremonies for Jones.

The ceremony was held in the rotunda of the City Hall building, due to inclement weather. Comptroller Darlene Green was also sworn in prior to Jones to serve her eighth term as the city’s chief fiscal officer.

Green became the first woman ever elected to the comptroller’s office in 1997. However, she has been the city's chief fiscal officer since she was appointed to the position in 1995.

In her speech, Green thanked God and noted that she’s kept the promises she made to St. Louis voters.

“I look forward to working with our new mayor, Tishaura Jones,” Green said. “Working together we can introduce a transformative public safety initiative that will reduce violent crime and that will reform criminal justice. We can streamline economic incentives to developers and support public education and we can provide resources to increase positive outcomes for housing and for health care. And yes — we can protect city assets and at the same time rebuild north St. Louis.”

Prior to Green’s swearing in, the National Black Anthem was sung by Detective John W. Leggette.

Jones won the election on April 6 with 51.7 percent of the vote, while her opponent Alderwoman Cara Spencer finished the night with 47.75 percent.

The election earlier this month saw a voter turnout of 29.14 percent, a slight decrease from the 30.12 percent voter turnout in 2017.

Last week, Jones appointed Adam Layne, her deputy chief of staff in the St. Louis Treasurer’s Office, to take over as treasurer. Jones has been the city’s treasurer since 2013 — she won reelection to another term in August 2020.