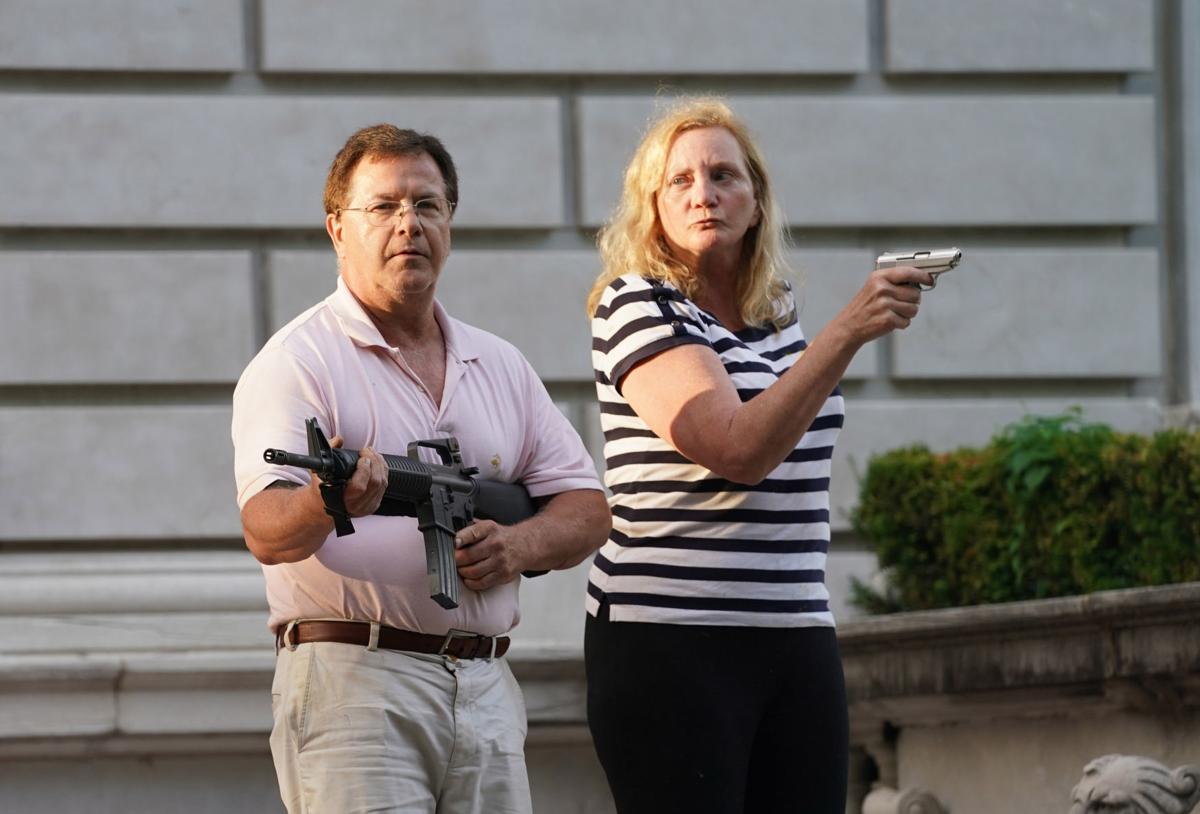 A husband and wife hold a pistol and automatic rifle as protesters walk past their house enroute to St. Louis Mayor Lyda Krewson's home during a protest march in St. Louis on Sunday, June 28, 2020. Photo by Bill Greenblatt/UPI 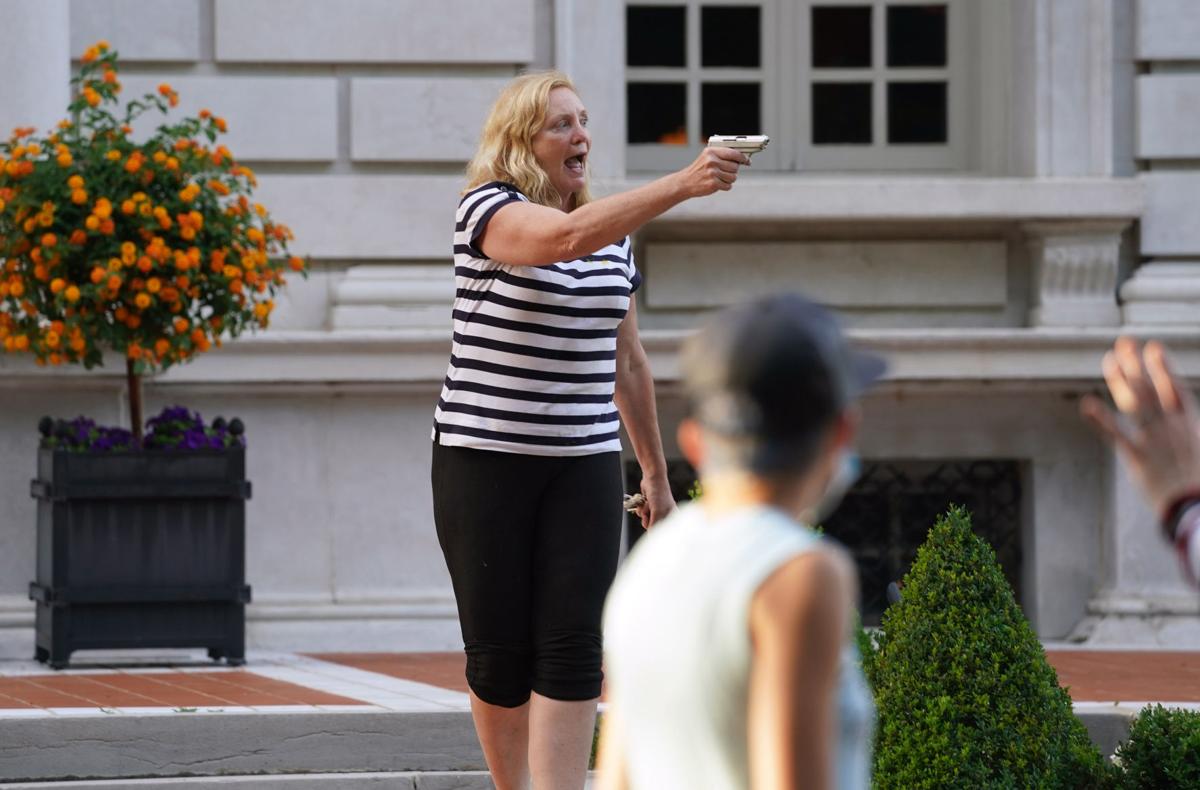 A woman holds a pistol on protesters as they walk past her house enroute to St. Louis Mayor Lyda Krewson's home during a protest march in St. Louis on Sunday, June 28, 2020.  Photo by Bill Greenblatt/UPI

A husband and wife hold a pistol and automatic rifle as protesters walk past their house enroute to St. Louis Mayor Lyda Krewson's home during a protest march in St. Louis on Sunday, June 28, 2020. Photo by Bill Greenblatt/UPI

A woman holds a pistol on protesters as they walk past her house enroute to St. Louis Mayor Lyda Krewson's home during a protest march in St. Louis on Sunday, June 28, 2020.  Photo by Bill Greenblatt/UPI

Protestors gathered in the Central West End on Sunday to demand the resignation of St. Louis Mayor Lyda Krewson. Their action came two days  after she read the names and addresses of nearly a dozen activists during a live social media broadcast. The doxxed activists were calling on the mayor to defund the police.

Activists, community members and public officials have condemned Krewson’s actions – which they say put the lives of citizens in the St. Louis region at risk. One of the doxxed activists was among 16 people arrested in Florissant on Saturday, according to the Florissant Police Department.

“”(Mayor Krewson) decided it was okay on her livestream to give the name and the personal addresses and exactly what the people wrote in these letters said,” activist and Congressional candidate Cori Bush told the crowd before they marched to Krewson’s home.

“She put lives in danger. She puts lives in immediate danger, in imminent danger because people...have serious concerns about what can happen when you’re an activist and you speak up, especially against police brutality.”

Doxxing is defined as “the publishing of private or identifying information about a particular individual on the Internet, typically with a malicious intent.”

The doxxed activist’s arrest – which was captured on video – took place as protestors demonstrated outside of the Florissant Police Department on Saturday, June 27. Activists have been consistently present at the department in response to video footage that showed a man being hit with an unmarked police video during a violent arrestThe detective, Joshua Smith, has since been fired and charged with assault.

As of Sunday evening, more than 42,000 have signed a Change.org petition started by activist Maxi Glamour just days ago calling for Krewson’s resignation. The Facebook video showing the doxxing has since been deleted and Krewson issued an online apology.

“I’d like to apologize for identifying individuals who presented letters to me at City Hall today. This was during one of my Facebook updates as I was answering routine questions. Never did I intend to harm anyone or cause distress. The update is removed and again, I apologize,” the statement read.

One of the people exposed by Krewson said they were “disturbed” by Krewson broadcasting their name and address during a Facebook Live COVID-19 briefing on June 26. They said they considered staying with friends because they were scared of the exposure.

“That kind of signaling from the mayor to the police force, who we already know from experience have intimidated people, is frightening,” they said. “There’s a lot of scary white supremacists and Nazis and trolls on the Internet but the police are a whole other layer. Those folk have even more tools to potentially harm and harass.”

They said they are especially concerned about the risks for Black protestors given the current climate. The protestor who was arrested is a well-known activist in the community and is African American.

“The Black organizers' lives are at considerable risk,” they said. “These are people who are specifically protesting a racist system and at this point it’s like they have a target on their backs.  I think about them. I don’t think I’m the person to be most at risk or targeted.”

Several hundred protestors marched to Krewson’s home chanting “hey-hey ho-ho, Lyda Krewson has got to go.” Organized by Expect Us and Respect Us, the Black-lead protest included white and Black protestors. Chants of “defund the police” and “close the Workhouse” rang in the air among raised fists, masked-faces and Black Lives Matter signs.

Barricades were placed in front of the mayor’s home in the gated community and the police shut down Kingshighway between Delmar and Forest Park. At one point, residents at a home in the high-end neighborhood brandished firearms and made threats as the protestors passed.

As the gathering marched from Krewson’s house to Union and Delmar, an artist painted a huge mural with the word RESIGN on the street in front of Krewson’s home and painted signs that read “Resign Lyda!” and “Close the Workhouse."

“If you really understood the people you were elected to serve, would you have made these comments?” Rev. Darryl Gray posed to Krewson, who did not make an appearance, during the Sunday evening protest. “This action was legal...but was it ethical?”

The group said that the next step is to shift their focus to Alderman President Lewis Reed, who would become mayor if Krewson were to resign. Dozens of protestors took out their cell phones to leave a voicemail at Reed’s city phone number, which was given out through a bullhorn by protestor Charles Buchanan.

“If we get Lyda to resign, who’s gonna be our mayor?” Buchanan asked. “Lewis Reed. We’re here today but on Tuesday, we're gonna be at Lewis Reed’s house.”

Ashley Jones contributed to this report.