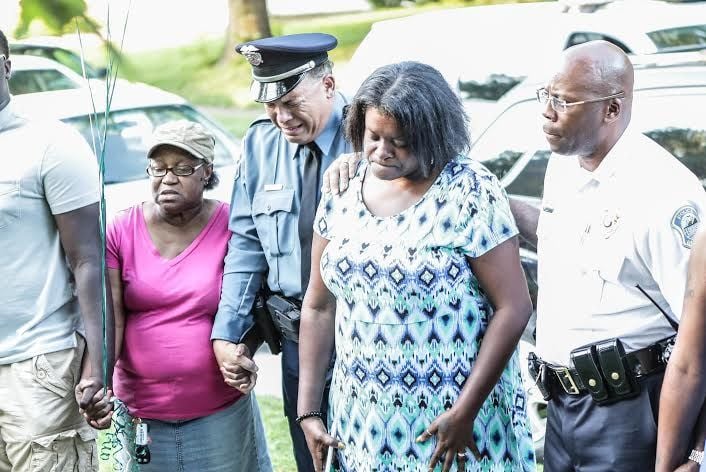 Ferguson Police and the community come together in prayer as they mourned the loss of nine-year-old Jamyla Bolden during a vigil organized in her memory Thursday night. Photo by Lawrence Bryant/St. Louis American 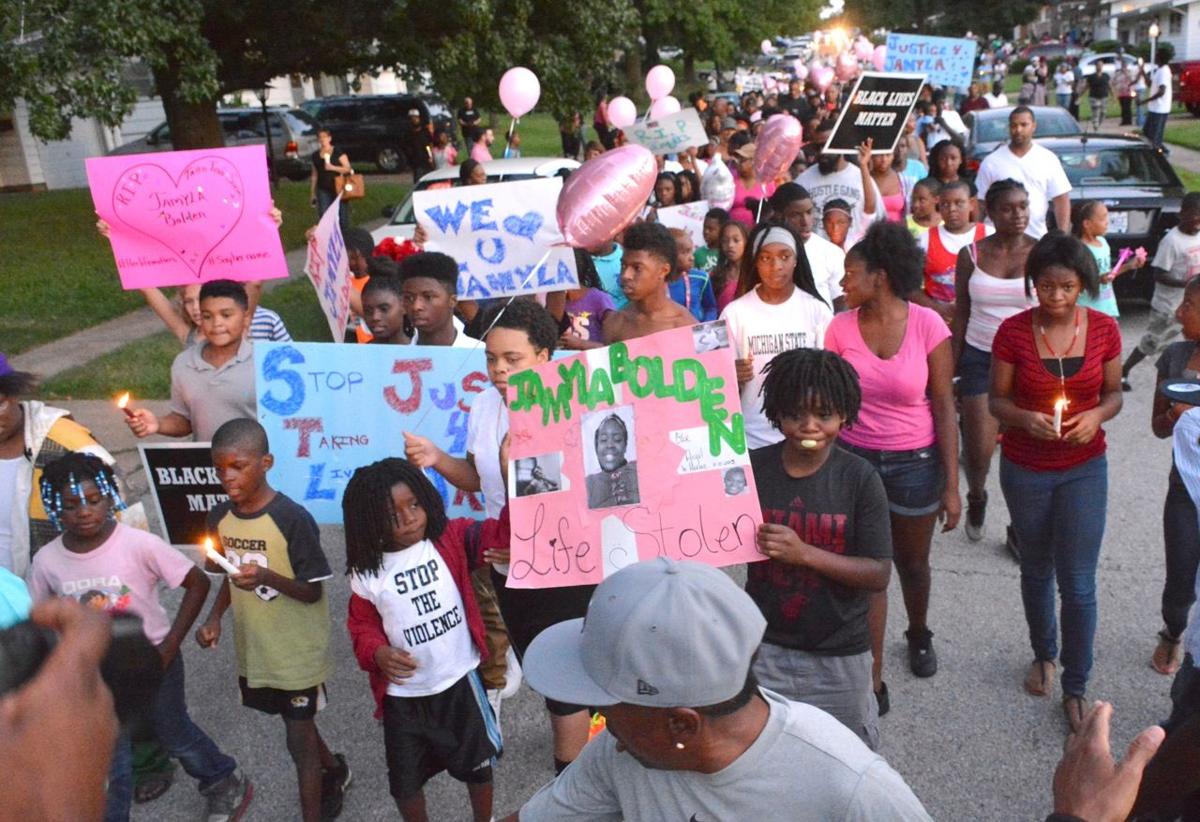 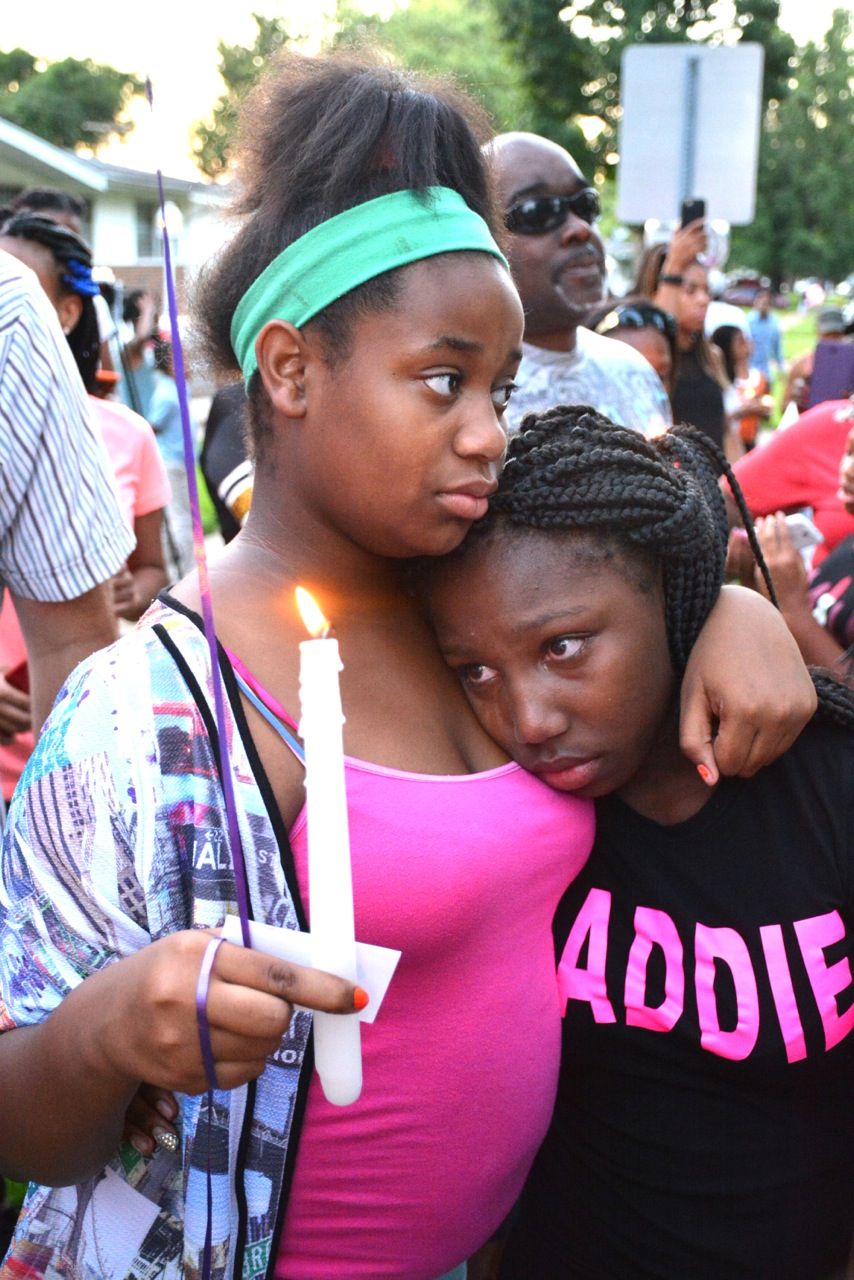 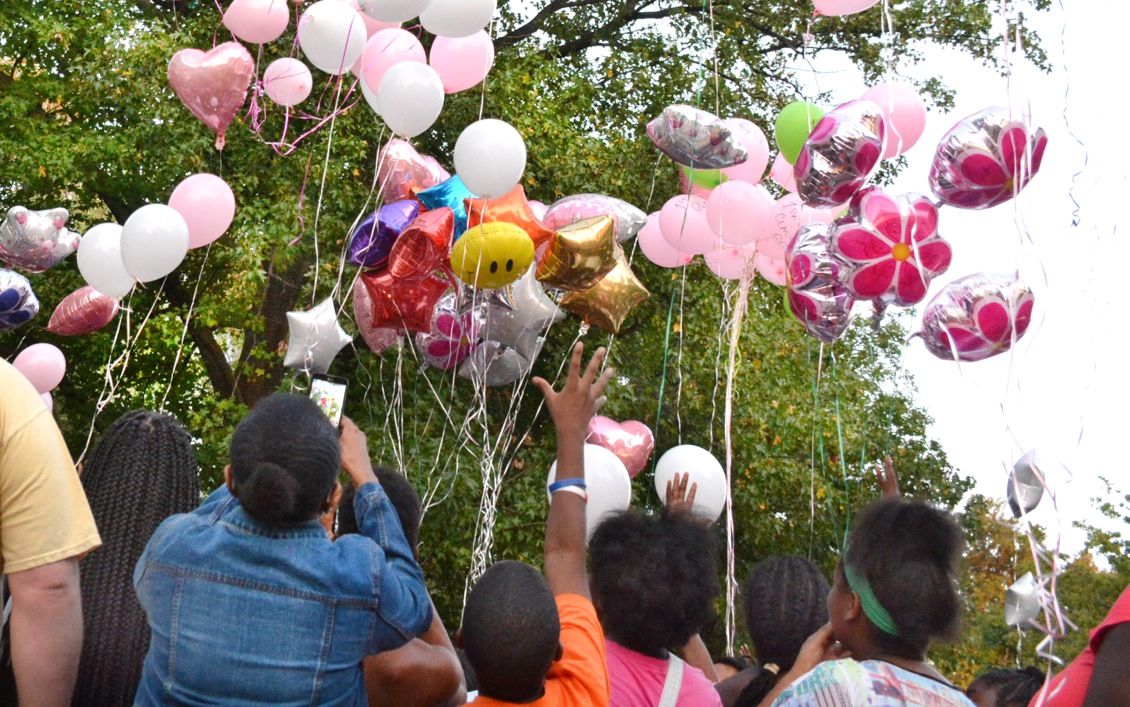 Ferguson Police and the community come together in prayer as they mourned the loss of nine-year-old Jamyla Bolden during a vigil organized in her memory Thursday night. Photo by Lawrence Bryant/St. Louis American

Blackmon stood on the frontlines in Ferguson amidst the constant protest in response to death of Michael Brown Jr. last August.

Thursday night she was less than two blocks away from the heart of the unrest, helping a community bid farewell to 9-year-old Jamyla Bolden. The fourth grade Ferguson resident was killed when a stray bullet entered her home Tuesday night.

A crowd of nearly 400 – including dozens of children – filled the 9200 block of Ellison to participate in a candlelight vigil, balloon release and march in memory of Jamyla.

This is our neighborhood. It ain’t about nothing to stand in the streets yelling if we don’t take care of our own.”

Words haven’t yet been created to aptly describe the level of sadness that permeated as mourners reflected on the senselessness of the tragedy.

In her short life, she clearly had an impact on all who knew her.

“My cousin was angel on this earth,” said April Cooks. She organized the vigil on behalf of her uncle, Jamyla’s father James Bolden, and the rest of the family.

In her death, Jamyla moved those who had never met her to tears. The thought of having her life snatched away in a place expected to be a guaranteed safety zone seemed too much to bear.

Ferguson police officers – who stood as statues while having expletives shouted at them during heated moments of protest – broke down. Some stood stoically with tears streaming down their face, while others melted into their emotions.

“We are going to do everything we can and we will not give up. Trust me,” said interim Ferguson Police Chief Andre Anderson. “We all collectively have to work together to heal the community and this family.”

But seeing the young girl’s peers attempt to come to grips with their loss in front of the home where Jamyla lived – and died –was the most difficult to watch.

Children who should have been home preparing for the next school day wailed and leaned on each other. They grieved to the point of near oblivion as the brief speeches continued over the course of the program.

“My heart goes out as I hear these children cry,” said activist Zaki Baruti, who served as master of ceremonies. “This is an abnormal reality in our community.”

If ever there was a moment that captured the broad reaching emotional and mental health trauma that gun violence imposes, this was it.

James Bolden’s entire body shook as he attempted to hold a megaphone and muster up enough composure to address the group that came to show their solidarity and support. Jamyla’s mother Kendric Henderson was understandably absent.

“I am deeply hurt, but I am very grateful that everybody came out to celebrate and lift up my daughter Jamyla Bolden in peace, love and unity,” James said. “And to the person that did this, I say whatever the situation was that happened, you had a choice.”

Between the tears, prayers and reflections there was a resounding demand for the community to aid law enforcement in helping identify Jamyla’s killer.

“We need justice for this little girl,” Cooks said. “For those of you that might know something, think about how the man walking around here can do it to your child. Think about what you are keeping to yourself.”

During the march portion children led the way and chanted “Justice for Jamya” for most of the way from Jamyla’s home to site where Michael Brown Jr.’s death in the Canfield Green Apartments.

It organically turned into a call and response with the adults starting off “Justice for…” and the youngsters passionately screaming “Jamyla.”

“I’m affected today,” Anthony Shahid admitted to the crowd. “People are probably saying, ‘If it was your son or daughter how would you feel? What I want you to understand that this is your daughter. If you start thinking any differently, then all you are gonna do is offer your condolences to the family and you’re gonna think it’s over with.”

Shahid asked the marchers to shout out the name of their own daughters’ names as they prepared to disperse.

“Now you can understand that this is your daughter,” Shahid said after they shouted them out.

He also promised to galvanize black men so that they can “take back the streets” from the criminal element.

Cooks pleaded for parents at the vigil to be proactive do everything humanly possible to keep their children from turning to crime.

“When you’re done here, hug your kids – take them to school in the morning,” Cooks said. “My uncle can’t do that. He’s not going to anymore parent-teacher conferences.

Shahid said that he would be working to get 1,000 black men to patrol the community and said when he had more details he welcomes support in doing so as they work to eliminate tragic casualties such as this.

“You took the life of a little baby that was doing her homework,” Shahid said. “We can’t let you do this.”

Now take this energy and passion and make a difference. This is the root of the problem. Blind, no regard, ruthless passion that is destroying the black communities and is spreading. Take action on all the senseless murdering of fellow black people. Enough pointing the finger else where. Its time to soul search, folks.