You have permission to edit this article.
Edit
Home
Sections
e-Edition
Newspaper in Education
Classifieds
Editorial Calendar
Make A Gift
Foundation
1 of 4 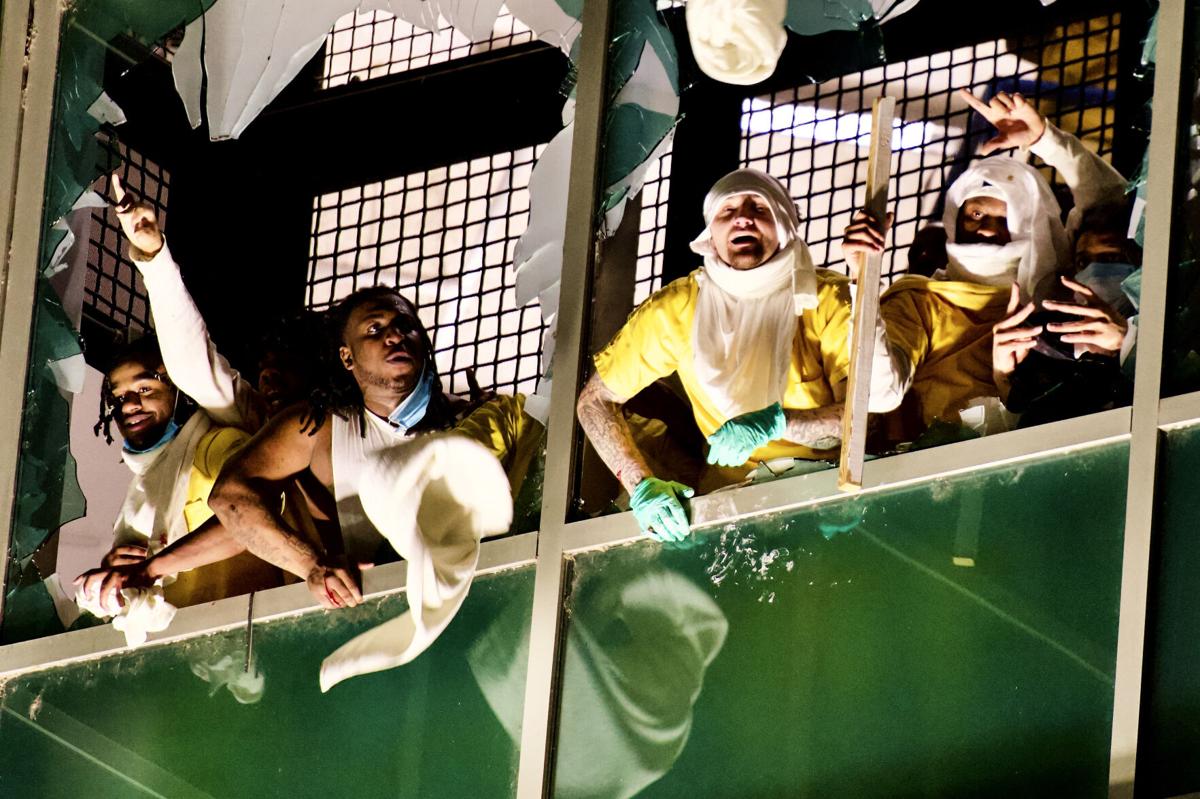 Inmates at the City Justice Center in downtown St. Louis stand at windows they smashed yelling to supporters late Easter Sunday night, April 4, 2021. It' the second uprising at the Justice Center in less than two months. 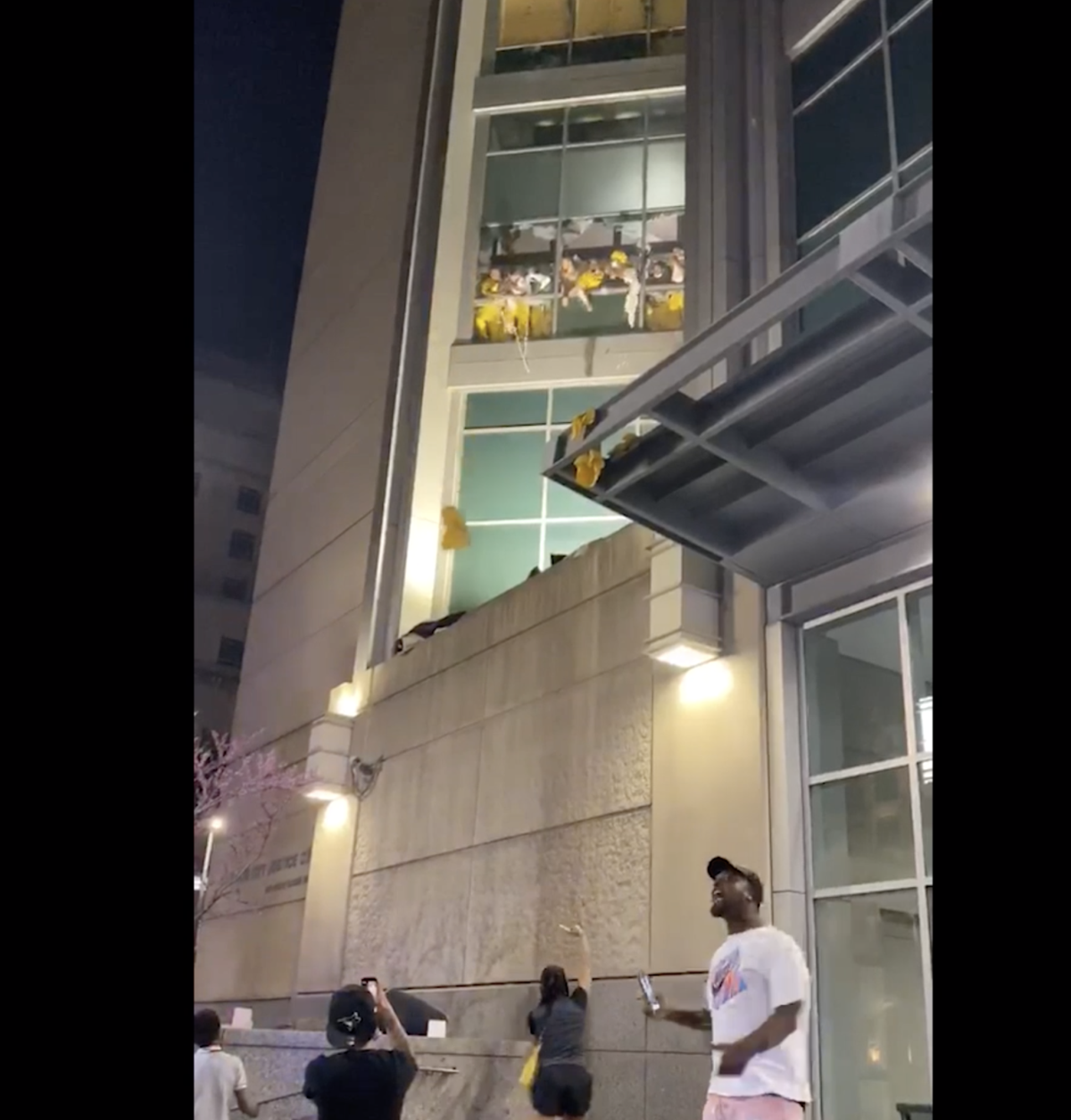 During a protest Sunday night, April 4, 2021, at the St. Louis City Justice Center, inmates on the third floor threw pieces of their uniforms down to supporters below. 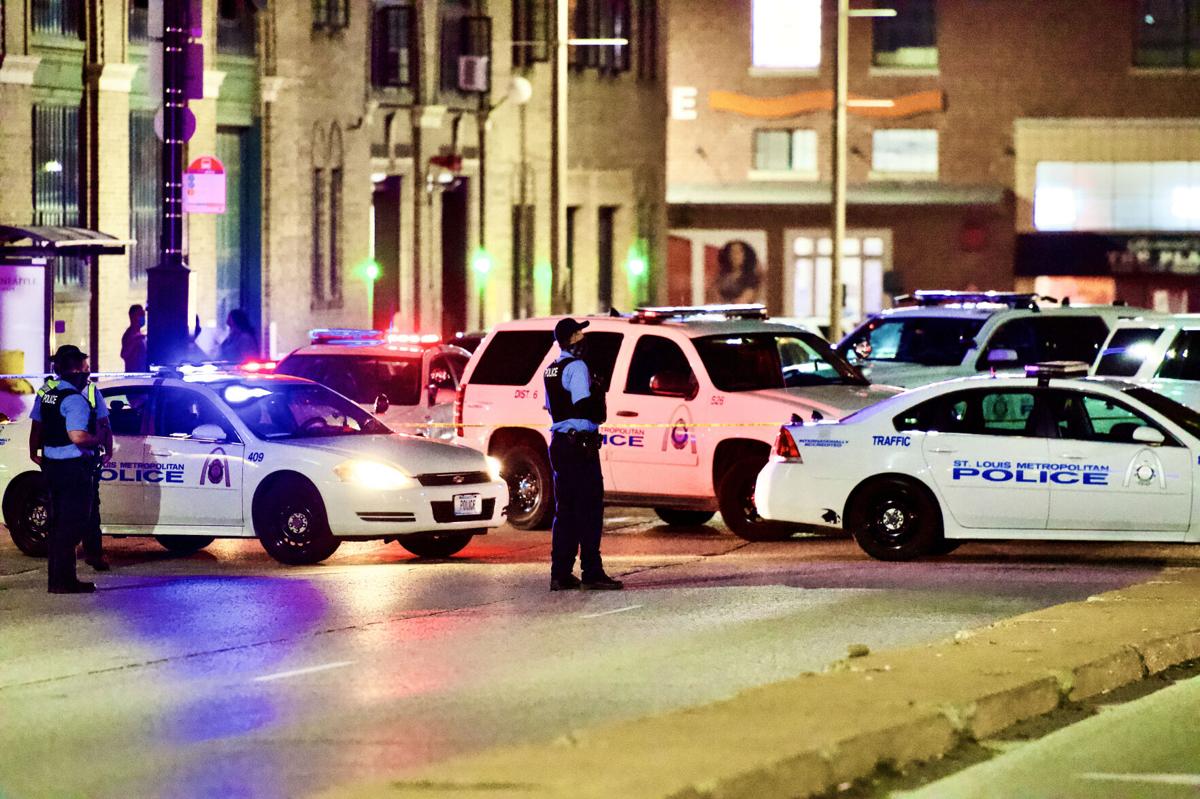 St. Louis Police Department set up road blocks at Tucker and Clark after inmates at the City Justice Center in downtown St. Louis smashed windows and tossed burning clothing and debris down onto the street late Easter Sunday night, April 4, 2021. It' the second uprising at the Justice Center in less than two months. Photo by Wiley Price / St. Louis American 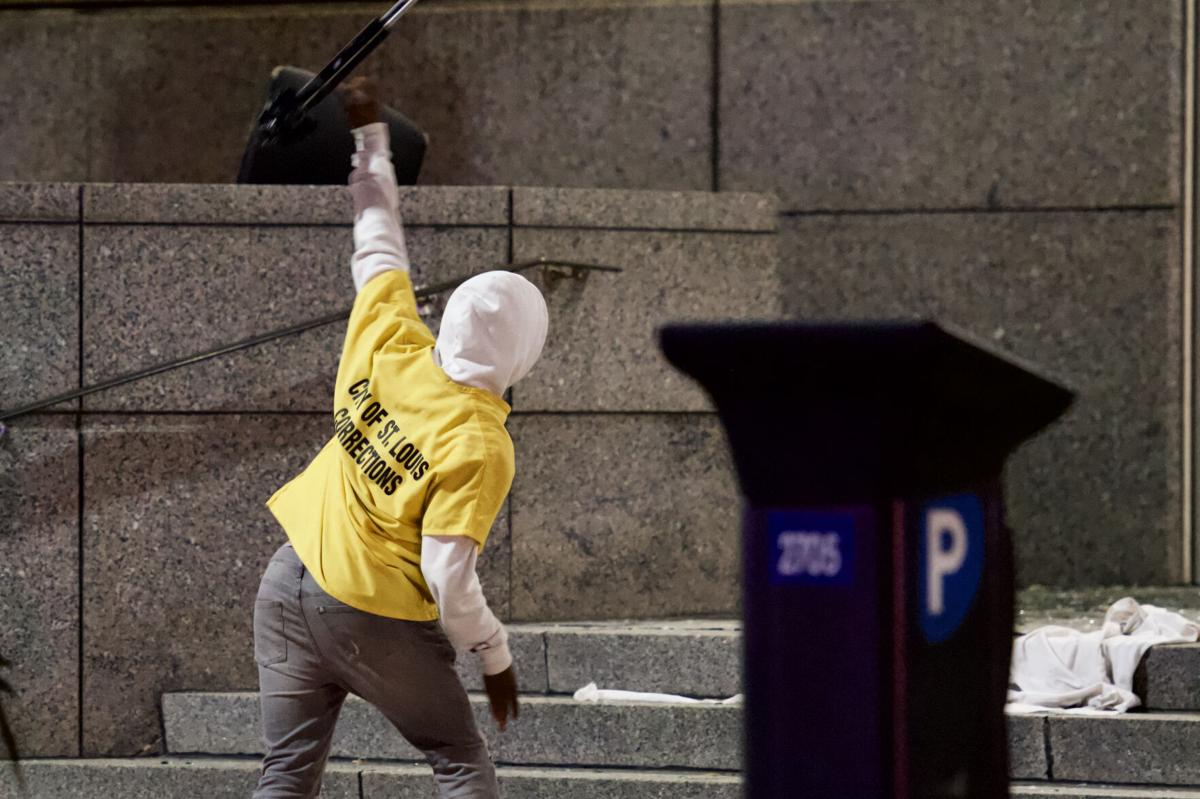 In at least the fourth protest since late December, inmates took over both the north and south side of the third floor of the City Justice Center jail beginning around 8:30 p.m. Sunday.

Police closed off Tucker Boulevard between Market Street and Clark Avenue as inmates threw trash, computers, furniture and other items from the broken third floor windows. Several small fires were set and at some point inmates began to throw their uniforms out the windows — which were then picked up and worn by onlookers, including several children.

Anti-police chants echoed through the growing crowd and inmates held signs, with one saying “Free LG.” At various points throughout the evening detainees chanted “we want court dates.” Inmates on the south side threw down a long rope made from what appeared to be bed sheets, but no one attempted to climb down.

Lisa LaGrone is with the Organization for Black Struggle and works as the coordinator for Project Haki, the OBS violence prevention based in the 22nd Ward. She was out at the jail Sunday evening and said she has been working with some of the inmates who protested CJC and were transferred to the Workhouse.

“St. Louis has got to do better, we cannot keep putting a Band-Aid on things,” LaGrone said.

Frankie Edwards said he was out at the jail during the protest to support those inmates, having been an inmate himself at the Workhouse in 2012. He had a heated conversation with St. Louis Sheriff Vernon Betts, who was attempting to get bystanders to back away from the jail.

“Your problem is not down here, your problem is up there,” Edwards said, referring to Betts. “You need to make sure those young men are getting treated fairly when this has calmed down.”

Edwards said he knows a few people inside the jail and said the phones were shut off, but he intended to contact them Monday.

“What Vernon Betts needs to do, what he got elected to do, is his job,” Edwards said. “Make sure the city is safe and make sure these inmates are safe and properly taken care of until the process of getting found innocent or guilty is through.”

Betts told The St. Louis American he went in and talked to the inmates, which is what he said to Edwards during their conversation.

“They agreed to come away from the window and stand down if they can talk to me first thing in the morning,” Betts said outside the jail Sunday evening. “Now I’ve not been involved in the negotiations on how to change the jail — because that’s not my job.”

Betts said he and his team have built a rapport with the inmates because they are in charge of taking them from the jail to court and back.

“It’s better for us to go in than the police — they look at the police as an enemy,” Betts said. “So that’s why we’ve been able to get them away already and I’m going to be a man of my word and in the morning, I will be talking to the guys and see what is going on.”

Betts mentioned the task force created by St. Louis Mayor Lyda Krewson is investigating the jail’s conditions. They presented a list of recommendations just over two weeks ago — over 60 in total, but 13 they consider matters of urgency.

The task force’s chairman is The Rev. Darryl Gray, a local criminal justice activist. He says the task force was allowed into the City Justice Center and found that one of the main issues facing inmates is that they are only allowed out of their cells for one hour a day to shower, make phone calls and participate in other activities.

A similar uprising occurred in early February, where 117 inmates took over the north side of the fourth floor of the jail, much like inmates did Sunday — breaking the windows and throwing debris down onto the sidewalk and street.

After that uprising, Public Safety Director Jimmie Edwards told the public that cells’ “locks don’t necessarily lock” and that is how inmates were able to break free and overpower the correctional officer one duty.

Two other protests occurred just before and on New Year’s Day. Each time, the inmates refused to return to their cells in protest of inadequate protections against COVID-19 for those being held there. Following each protest, groups of inmates were transferred to the Workhouse,  which had been slated to be closed Dec. 31, 2020. Fifty-six people were transferred from the Justice Center to the Workhouse on Dec. 29, followed by 45 on Jan. 1.

Krewson did not immediately comment on the situation, but on Monday her press person Jacob Long released a preliminary statement calling the protests “two violent and dangerous disturbances.”

“There is an immediate need for change in our city’s justice system. Uprisings at our jails should not become the norm, and this is unacceptable,” she wrote. “We need a clear chain of command — and the buck must stop at the Mayor’s desk. We need to get serious about moving pre-trial detainees out of our jails, vaccinating our inmates, and creating a new culture of justice in Saint Louis.”

Her opponent, Alderwoman Cara Spencer, released a statement Monday morning stating that she remained committed to closing the workhouse.

“Last night marks the 4th serious incident at the CHC in a matter of months,” she wrote. “It’s clear that the city is failing to ensure the safety and security of those incarcerated in the city’s care and correctional officers in our incarceration facilities. As mayor I will launch a full investigation into the city’s two detention facilities to ensure that staff and the city residents incarcerated there are safe.”