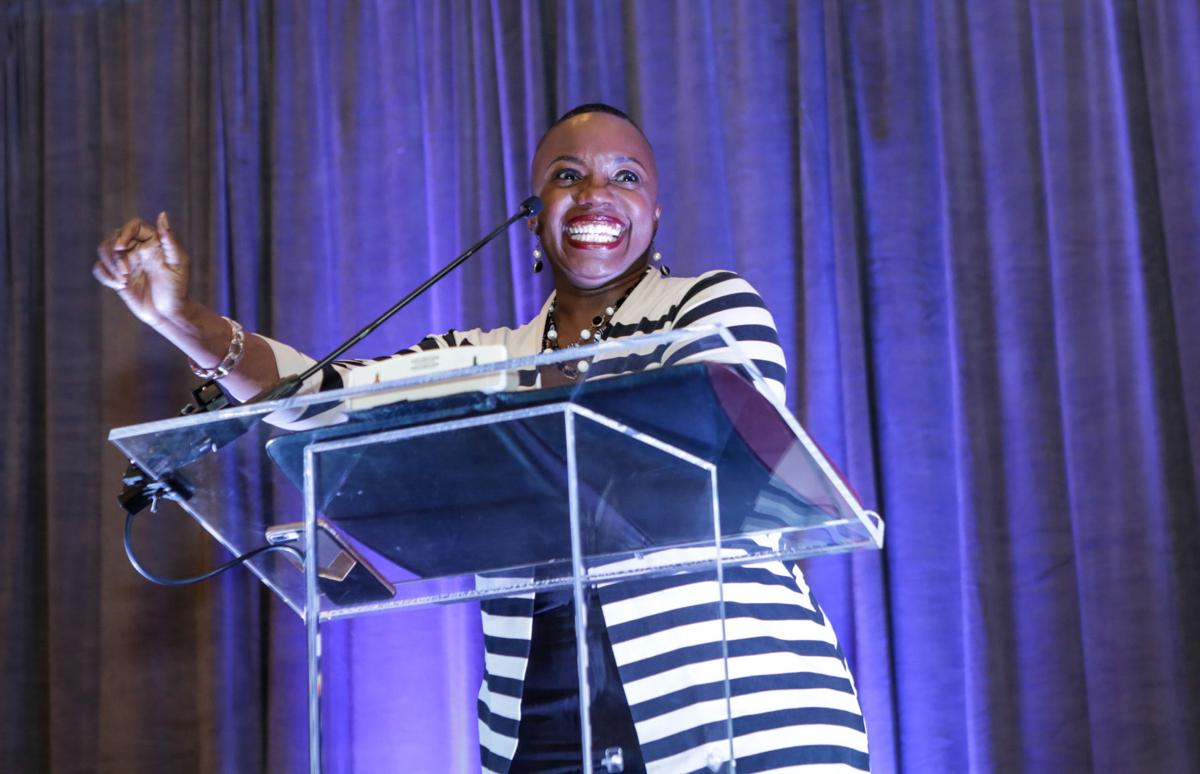 Rebeccah Bennett, mistress of ceremonies for the St. Louis American Foundation’s 8th Annual Salute to Young Leaders Networking Awards Reception, encouraged guests to give a lively reception to each of the 20 awardees Thursday night at The Four Seasons. Photo by Lawrence Bryant. 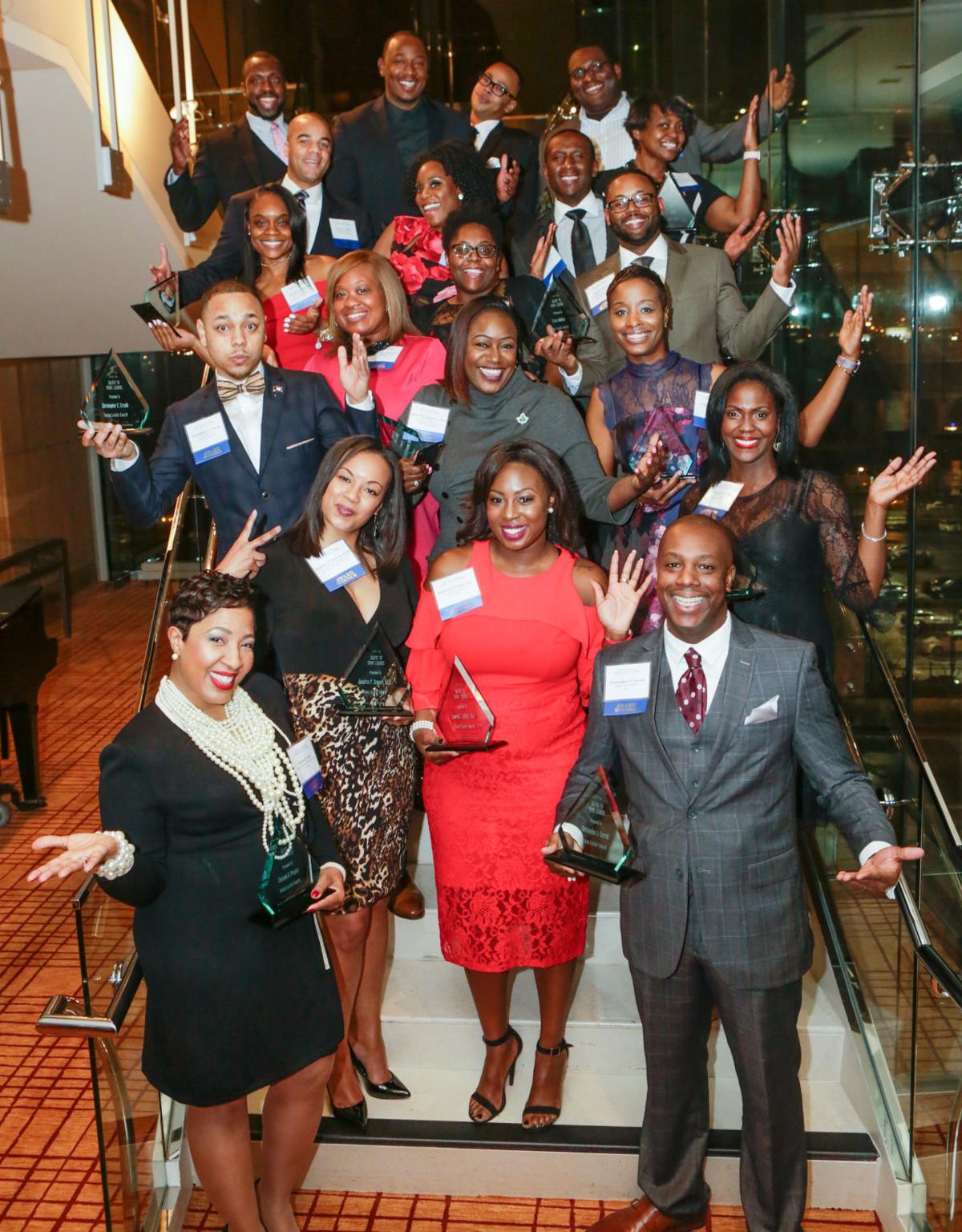 Rebeccah Bennett, mistress of ceremonies for the St. Louis American Foundation’s 8th Annual Salute to Young Leaders Networking Awards Reception, encouraged guests to give a lively reception to each of the 20 awardees Thursday night at The Four Seasons. Photo by Lawrence Bryant.

“Can I be honest?” Nicole McPherson, department leader of home office talent acquisition at Edward Jones, one of the sponsors for the St. Louis American Foundation’s 8th Annual Salute to Young Leaders Networking Awards Reception, asked Thursday, February 15 at The Four Seasons.

“I didn’t know I was going to have this much fun here,” she confessed just before she helped present a group of awards to the 2018 class of Young Leaders. “I’m having a blast.”

As per usual for the Young Leaders event, the room was on fire with positive energy ushered in by Mistress of Ceremonies Rebeccah Bennett, founder and principal for Emerging Wisdom. The audience could hardly wait to cheer on the 20 young men and women at the celebration presented by the St. Louis American Foundation and Wells Fargo Advisors. Bennett urged them not to be shy about it.

“Salute to Young Leaders is its own breed of celebration,” Bennett said. “It does not follow conventional standards. We do not ask you to hold your applause – so that people know how much we value and appreciate their talent, their expertise, their intelligence, their commitment and their genius. How do the young people say it? Let’s turn up.”

The crowd was ready for the “turn up.” It was hard to tell which guests belonged to which respective young leader, because everybody was rooting for each other in addition to the friend, family member, spouse, co-worker, or church member whom they came to support.

When it was her turn to speak on behalf of sponsor organization the Regional Business Council, President and CEO Kathy Osborn asked for all the people who had been rooting all night to stand and be recognized.

“I feel very strongly that achievement is never a solitary accomplishment,” said Osborn. “Our careers and our lives depend on many people and many relationships.”

“It takes a village to raise a success,” Bennett said. “In this room tonight, we not only have an abundance of talent, but we have individual and collective genius. We have resourcefulness, and we have the ability to change the world. It is happening right here with the 20 people we are saluting tonight – and those of you who are supporting them. We honor and acknowledge the village that is in the room today.”

The honorees came from a host of professions and areas of service, and with each came a steady stream of turn up.

But when Tracey O. Hermanstyne, a neuroscientist for Washington University School of Medicine, was recognized, Bennett and everyone else took the liberty of an additional moment to bask in celebrating her.

Bennett was able to contain the “shout” she felt coming as she explained that Hermanstyne studies molecular and cellular mechanisms that underlie the functioning of the brain’s clock – which controls circadian rhythms in physiology and behavior.

“Tracey will translate what that means after the event,” Bennett joked.

The evening was light and fun, but praising the work of this year’s young leaders was serious business.

“You have taken your passion and turned it into your profession, but you also have purpose – which is why you give back, make a difference and help others,” said Michael McMillan, Urban League of Metropolitan St. Louis CEO, as he presented on behalf of the organization, which was also a sponsor. “We expect even bigger and better things for the future.”

As she spoke on behalf of sponsor Webster University, Nicole Roach, associate vice president of Diversity and Inclusion, charged the honorees to not let anyone or anything stand in the way of their journey.

Osborn and Bennett asked them to pave the way for someone coming behind them, but not before they stopped to enjoy being praised for what they’ve accomplished so far – and acknowledge the cheerleaders and support systems that blessed them along the way.

“I can’t emphasize enough how important it is for you to take in all of the love and adoration and support that you are getting,” Bennett said. “We say a lot about haters on the path. And they might in fact be there. But we want you to know that for every one of them, there are 10 of us – those who are not threatened by your brilliance and applaud your service.”