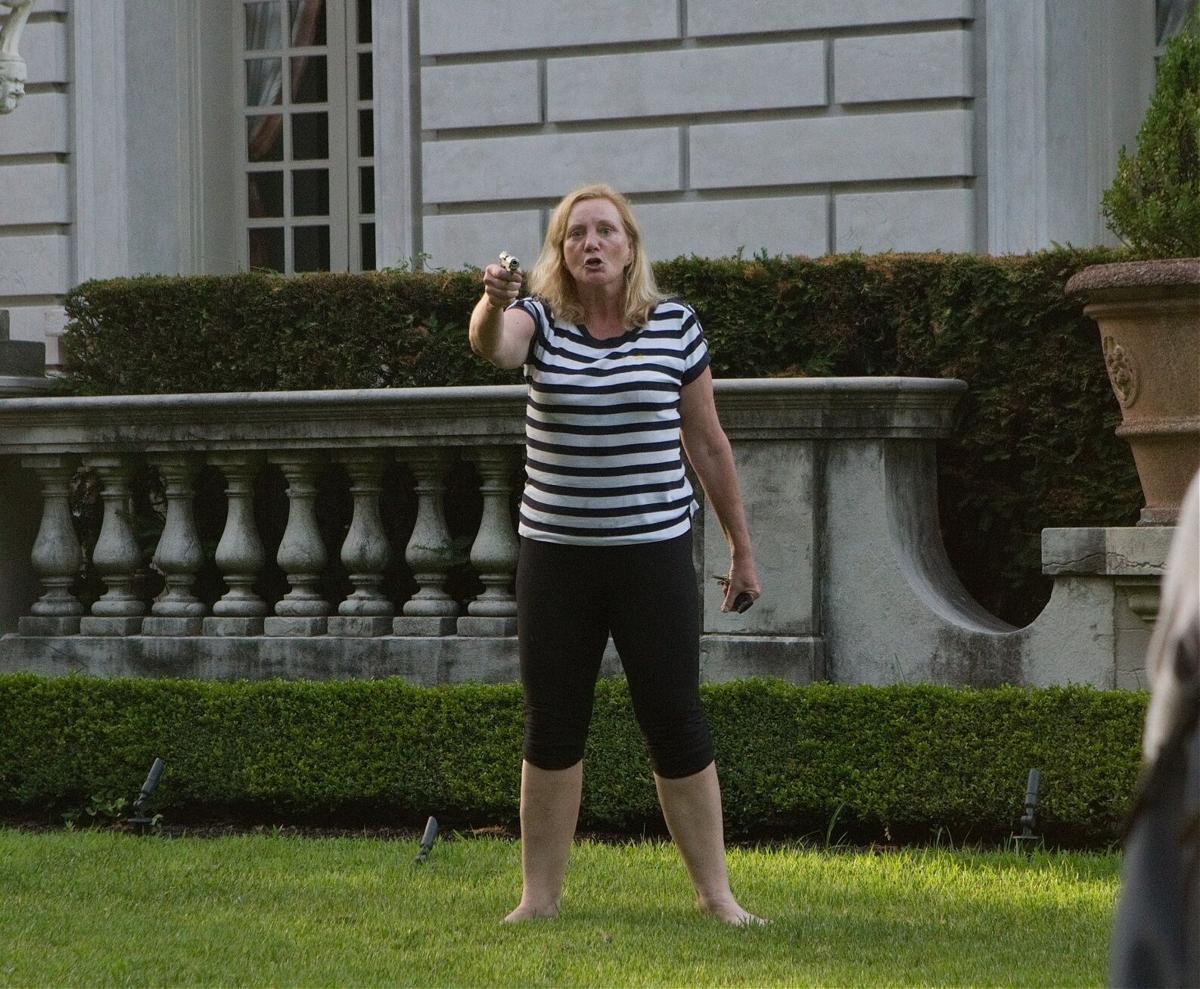 A couple draws their firearms on protestors as they enter their neighborhood during a protest against St. Louis Mayor Lyda Krewson , in St Louis, Missouri, U.S. June 28, 2020. REUTERS/Lawrence Bryant 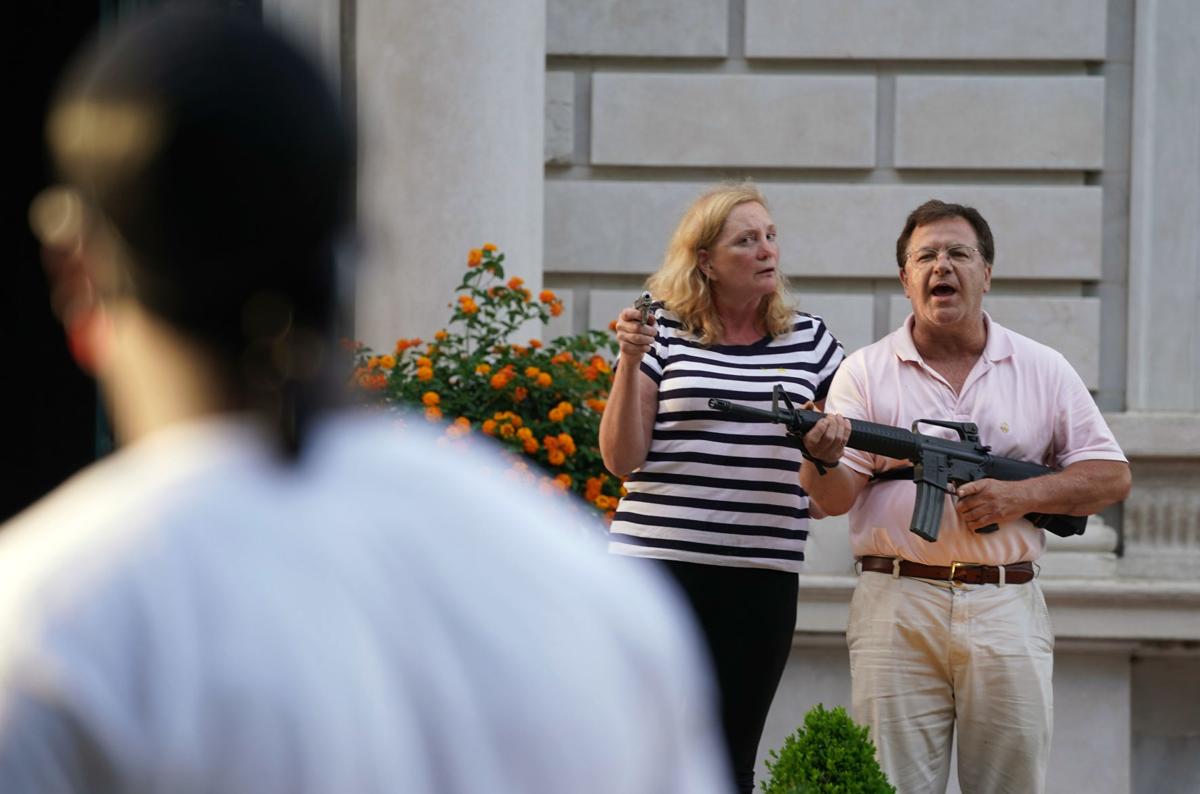 Patricia McCloskey and Mark McCloskey brandished guns as protestors marching past their home in the Central West End on Sunday, June 28.

A couple draws their firearms on protestors as they enter their neighborhood during a protest against St. Louis Mayor Lyda Krewson , in St Louis, Missouri, U.S. June 28, 2020. REUTERS/Lawrence Bryant

Patricia McCloskey and Mark McCloskey brandished guns as protestors marching past their home in the Central West End on Sunday, June 28.

St. Louis Circuit Attorney Kimberly Gardner – the first Black person to serve as the city’s chief prosecutor – has charged two wealthy white attorneys for flourishing weapons at peaceful protestors. Powerful Republicans – the president, the governor, a U.S. senator and the state attorney general – attacked her and defended the accused. And a Black congressman, two state representatives, and Missouri’s own wall of moms have risen in her defense.

All the while, Gardner is working under death threats while campaigning for office. In fact, every elected official caught up in this battle is on the August 4 ballot, which helps to explain the furor.

On Monday, July 20, Gardner charged both Mark and Patricia McCloskey with unlawful use of a weapon, which is a Class E felony. The charges stem from the McCloskeys confronting peaceful protestors with weapons when they passed in front of their home on a private street in the Central West End on June 28.

“It is illegal to wave weapons in a threatening manner at those participating in nonviolent protest, and while we are fortunate this situation did not escalate into deadly force, this type of conduct is unacceptable in St. Louis,” Gardner said.

The McCloskeys’ attorney Joel J. Schwartz said they will plead not guilty.

“I, along with my clients, support the First Amendment right of every citizen to have their voice and opinion heard,” Schwartz said. “This right, however, must be balanced with the Second Amendment and Missouri law, which entitle each of us to protect our home and family from potential threats.”

Though the McCloskeys’ claims on national TV that they were threatened seemed to reach and persuade the president of the United States and Missouri governor, abundant video evidence of the incident shows no one approaching the McCloskeys or their home. The St. Louis police probable cause statement makes no reference to a reasonable need for self-defense.

State Rep. Rasheen Aldridge personally attended the protests on June 28. “Not one protestor set foot on their property or said or did anything that would have given them the impression that we wanted to harm them,” Aldridge said.

Aldridge went directly after one of the McCloskeys’ powerful Republican apologists who have taken to national television in their defense: the governor.

“Contrary to what Gov. Mike Parson said Monday, July 20 on The Hannity Show, we were not some bloodthirsty, rampaging mob,” Aldridge said. “We practiced peaceful civil disobedience and had the threat of violence imposed upon us. Parson’s dishonest hypocrisy about the events of that night shows he has no interest in actual justice, only in exploiting this situation to mobilize his base.”

Parson went so far as to say – without reviewing the evidence or allowing the legal process to proceed according to the U.S. Constitution and state law – that he would pardon the McCloskeys if they are convicted.

In response, the Missouri chapter of Moms Demand Action – the nation’s largest grassroots volunteer network working to end gun violence – rose up like a Missouri version of the wall of moms protecting protestors in Portland from unmarked federal agents. They accused Parson of directly condoning “threatening acts of violence towards Black Missourians and all those exercising their constitutional rights to protest.”

The accusation was made by Karen Rogers, a volunteer with the Missouri Chapter of Moms Demand Action.

“Just days after the governor urged lawmakers to create harsher punishments for violent crimes, these comments seemed to suggest this dangerous behavior should be singled out for special, lenient treatment,” Rogers said.

“If the governor were serious about saving lives in Missouri, he’d add common-sense gun violence prevention measures to his agenda for next week’s special session and condemn this couple’s dangerous behavior.”

Moms Demand Action (www.momsdemandaction.org) is part of Everytown for Gun Safety, an organization with nearly six million supporters and more than 375,000 donors.

Missouri Attorney General Eric Schmitt also grandstanded in defense of the McCloskeys and at the expense of St. Louis’ elected prosecutor. Less than 24 hours after the charges were filed, Schmitt released a passionate statement asserting that, as Missouri’s chief law enforcement officer, he would immediately enter into this case and seek a dismissal.

As Michael A. Wolff, a former chief justice of the Missouri Supreme Court pointed out to Schmitt in social media, the state attorney general has no standing in this case. It was an empty political gesture – like Schmitt previously filing suit against the Chinese Communist Party.

“The Attorney General’s Office did not investigate the incident involving the McCloskeys, and Schmitt’s actions are based on nothing more than a blind judgment on the merits,” said state Rep. Steve Roberts, an attorney and former prosecutor in the office Gardner now leads.

“Gov. Parson has already spoken about pardoning the McCloskeys, which makes Schmitt’s actions even more baffling. A pardon would only take place if – after a presentation of the evidence – a jury found Mr. or Mrs. McCloskey guilty. Schmitt is attempting to circumvent the prosecution of the case altogether – without knowing the facts or with indifference to them. He is making it clear that his office does not care whether a crime was committed or not.”

Parson and Schmitt were not alone on the Republican political grandstand against Gardner. U.S. Senator Josh Hawley (R-Missouri) also called for a Department of Justice investigation of her while her investigation was underway before she filed charges. This was after President Trump called her investigation “disgraceful” despite expressing no knowledge of the facts of the case.

“I am appalled that Missouri’s junior U.S. senator would attempt to interfere with an ongoing criminal investigation in the City of St. Louis by asking our racist, incompetent president and his failed attorney general — who has long since surrendered any allegiance to the rule of law — to misuse the U.S. Department of Justice Civil Rights Division by intervening in this case,” Clay said.

“The Civil Rights Division of the U.S. Department of Justice was created to investigate and defend the rights of African Americans and other minorities who have been subjected to generations of racially-fueled violence, police misconduct, and voter suppression. It was not created to harass and interfere with local law enforcement. And it was not created to allow federal elected officials to interfere with local law enforcement by inflaming racial divisions to advance their own political agendas.”

Clay said that Hawley is simply enabling the McCloskeys in their attempt to intimidate peaceful protests of police abuses.

“The rights of non-violent protestors are guaranteed by the U.S. Constitution and should never be subject to the threat of deadly force, whether by individuals or by the police,” Clay said. “The young Americans who are on the streets in St. Louis and across the nation deserve constitutional policing and a government that is as good as they are. I stand with them.”

Both Gardner and Clay are on the August 4 primary ballot with primary challengers.

As for the merits of the actual case – which does not appear to matter to Trump, Hawley, Parson or Schmitt – the McCloskey have claimed that the privacy of their street, which was posted at the gate that protestors entered to pass by them, should exempt them from being charged. They also have claimed that Patricia McCloskeys’ handgun was inoperable. Clearly, those claims did not persuade Gardner.

Gardner said she will recommend the office’s diversion program for the McCloskeys. Their attorney declined further comment.

“The people of St. Louis have elected me to pursue equal justice under the law fairly and impartially,” Gardner said, “and that is what I intend to do.”

Aldridge – the only political officeholder weighing in on this case who witnessed the actual events of June 28 – is alarmed to see due process disregarded for a political circus based on an attack on a Black woman prosecutor trying to do her job under threat of death.

“The eagerness with which the governor and attorney general attacked Circuit Attorney Kimberly Gardner for standing up for her constituents' First Amendment rights is alarming,” Aldridge said.

“Her decision to charge the McCloskeys with the unlawful use of a weapon is warranted given what I saw that evening, and a jury should determine whether or not they're guilty of that crime. The governor and attorney general's decision to get involved does nothing more than transform our state's legal process into political sideshow.”

Way to turn a completely non-race-related event into something racist by insinuating racist motives by people who simply see an injustice. A truly disgusting article, written by somebody with a small, one-track mind.

The preservation of whiteness at the balk of the law is the disgusting part. Missouri statuate 571.030 section 4 is what these white unearned privilegers violated and it's quite interesting this fact is being left out of every article, press conference and narrow-minded comment. Peaceful protesters are being called mobs to fit an emotionally appealing narrative that is designed to defend the McClosky's lawlessness. The McClosky's broke the law and they are being charged as such. Parson, hawley and others defending the crimnal actions of these lawyers, trying to intimidate and usurp the authority of the office of the Prosecuting Attorney of the City of St. Louis is outrageous and shrouded in white privilege. The behavior of these elected/appointed robots is the epitome of disgusting.