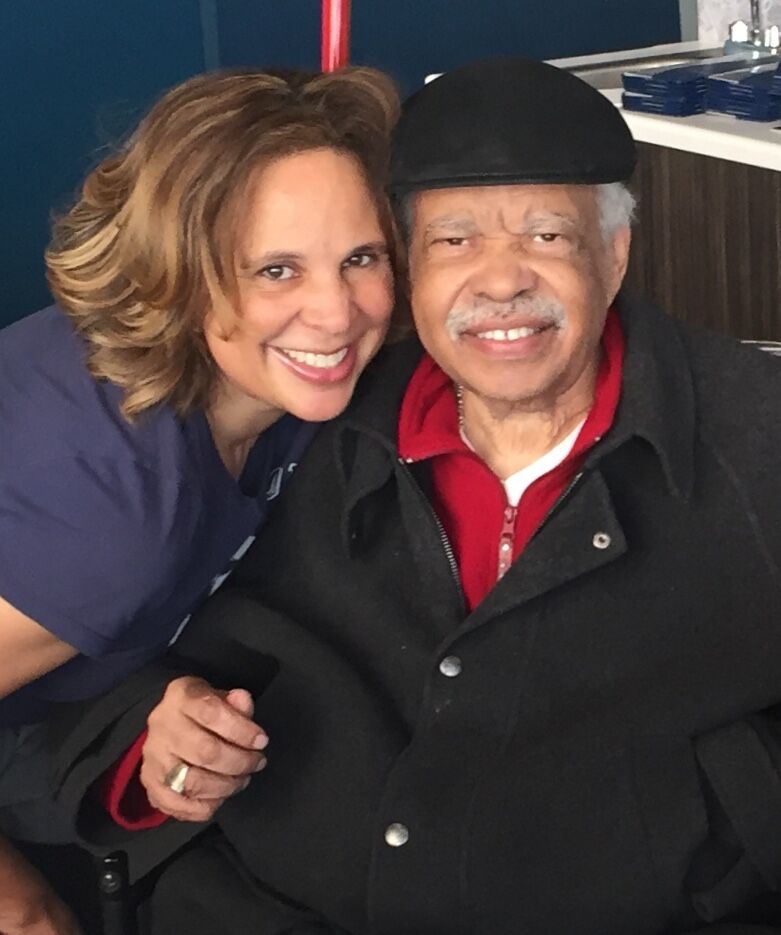 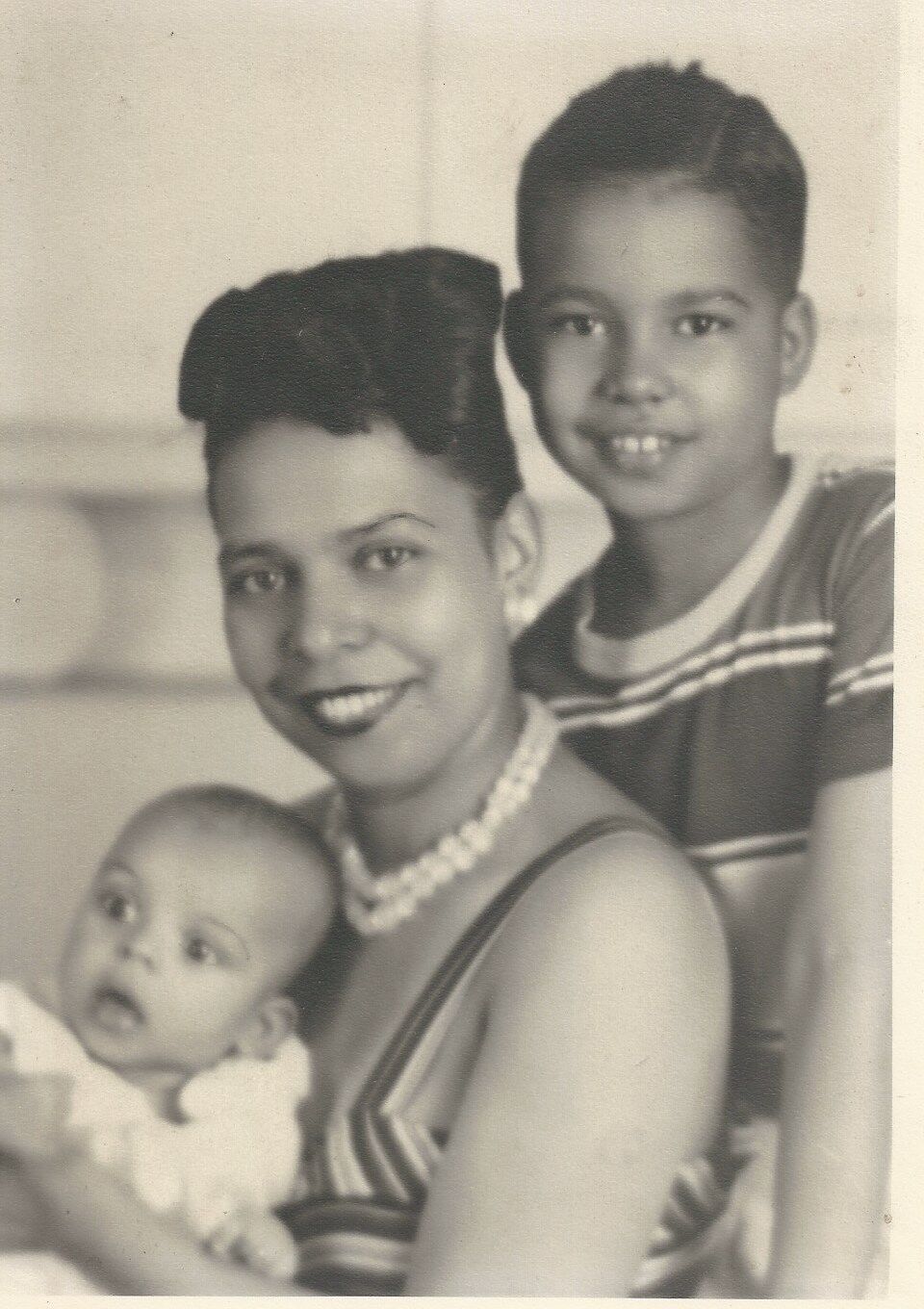 "My uncle Christopher Meaux Sr., my grandmother Edythe Meaux Smith and my dad (1950)." 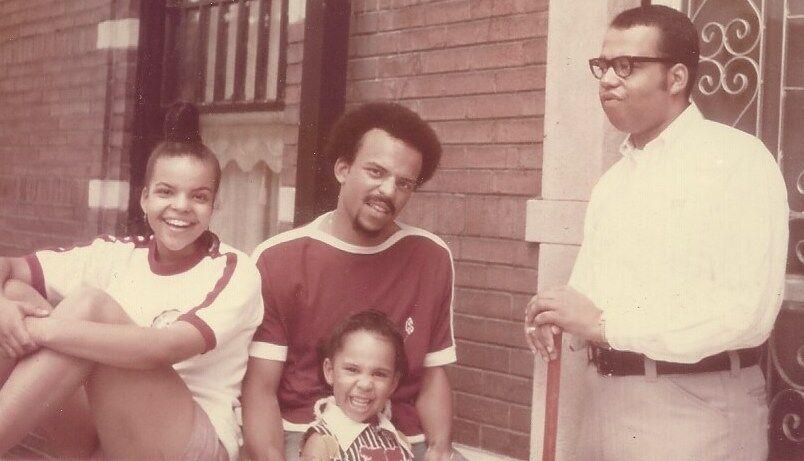 "My aunt Robin, uncle Chris, me and my dad on Windermere Place circa 1971"

When telling me that my father was a “born diplomat,” my grandmother, Edythe Meaux Smith, shared the story of his birthday party when he was only 7 or 8 years old. In those days the birthday host would, apparently, stand by their front door to greet their guests and then receive and open their gifts.

Unsurprisingly, in the 1940s, there weren’t endless gift options – especially in the Black community – so several people gifted my dad the exact same pair of blue-striped pajamas.

My grandmother said that, instead of expressing any disappointment, each time my father received and opened yet another pair of those blue-striped pajamas, he’d address his guest with appreciation and tell them, “Thank you, this is exactly what I wanted.”

My grandmother said that my dad knew what to say – and what not to say – that she never had to worry - that he knew how to make people feel connected, feel valued. Whenever she told that story, I had the sense that she learned lessons from my father, as much as we all have.

When I think of my father, Wayman Flynn Smith, I too think of a diplomatic and self-determined man, yet neither of these concepts – diplomacy nor self-determination – fully captures how my father lived his life.

Few of you have ever seen my father mad, and even fewer still have ever heard him complain about anything. My father had an innate and majestic sense of grace and possibility.

A kind of grace that – in this world – is often mistaken for blindness. Yet, to the contrary, my father had extremely clear vision. He saw and understood – with mathematical precision – how this world works, and he saw the people in this world for what and who we are, at our best and at our worst, and no matter how common the experience or the behavior, my father chose, over and over again, to focus on the best in each of us and to embody positive change.

My earliest memories of my dad take me back to our home on Windermere Place. He went through this sweet Dick Van Dyke/Nat King Cole phase - where he’d put on a smoking jacket, retire to the living room, smoke one of the pipes he’d inherited from his father, and read the evening paper. Each evening I’d crawl up on to his lap, and he’d open the “funny papers,” he’d patiently read each comic strip to me – Blondie & Dagwood, The Peanuts, Beetle Bailey – and we’d laugh and laugh. Being only 4 years old or so, I had no idea of what any of these comic strips meant, but he’d laugh, so, I’d laugh, and it was perfect.

When I was a little older, he invited me to his sacred Saturday ritual. On Saturdays when he wasn’t hanging out with Julius Hunter, Gus Stuart, his brother Christopher, or Mike and Steve Roberts, his Saturdays were spent visiting my grandmother and his aunt, Thelma Meaux (who’d inherited his grandparents’ home on Northland Place); taking his cars to the hand car wash on Delmar and Kingshighway; dropping-off and picking up his shoes from the House of Good Care; lunching at O.T. Hodges Chili; and then visiting various car lots, pawn shops and jewelry stores. He never met a stranger, and everyone was happy to see him wherever he went. As we drove around the city, and when I wasn’t talking his head off, he’d tell me jokes and educate me about jazz music.

One of the best educations my father gave me was his including me, in attending award dinners, political and non-profit events with him - even at a very young age. Not only did I learn etiquette, social skills, table manners, and patience, I received a one-of-a-kind “keynote address education.” Learning about politics, social responsibility, civic responsibility, and cultural history from community legends like Maynard Jackson, Andrew Young, Damon Keith, Bill Clay Sr., Wm. Lacy Clay, Henry Givens Jr., John Lewis, Elijah Cummings, Maxine Waters, Earl Wilson, Ida Woolfolk, Frankie Freeman, Margaret Bush Wilson, Janet Reno, Percy Green and countless others. This helped me fill the gaps in my own formal education and connect my personal experiences with our community, and with this world, more holistically and realistically.

I learned from people who represent resilience and who overcame the worst of odds, whose passion and sense of responsibility were infectious. People who helped make concrete my sense of accountability and earned trust.

Later, when I started to live with my dad full-time, he became my Mr. Mom in addition to his role as my dad. When I first went to live with him, the refrigerator held two things: a can of mixed nuts and diet coke. But he figured it out and he quickly made the necessary adjustments to ensure my sense of security and comfort, ensure my opportunity for success, and to invest in the value and importance of fun. If I needed to go to his office to do my homework, I did it; if he had to work late and we needed to do my homework at Talayna’s while catching dinner, we did that; and if I did not have any homework, and it was during the baseball season, we’d dinner at Busch Stadium on bratwurst and Cracker Jacks.

When I was away at Georgetown, hardly two weeks went by when he didn’t come to town, to check on me. He always made sure that I had flowers on my birthday and Valentine’s Day.

His care packages were the best. He'd send me money, food, but, even better than that, he’d send the latest copies of Jet Magazine and the St. Louis Evening Whirl.

Chuck was in the midst of moving to St. Louis when our daughter was born, so my dad became very protective of us. The first time I woke up to properly meet my daughter, I looked over, and my father had already arranged to have a sleeping cot put in my hospital room, just in case I needed him.

My father introduced me to his love for theatre. First at the Muny Opera in Forest Park and later on Broadway. Much to the distress of his nerves, he made sure that “his daughter” knew how to drive a stick-shift car. And, when I was sick, he’d buy every cold remedy on the market to help me feel better.

When I took my first business trip to Nigeria, my father entirely rearranged his own business trip to South Africa, just so that we could meet in London for one night and have dinner at his favorite restaurant.

My father never missed one of my birthdays, and he flew in to celebrate with me when I closed on my first home.

I have so many meaningful memories of my father: drinking chocolate malts at Velvet Freeze, eating BLTs at Crown Candy, buying records at Peaches record store on Hampton Avenue, and celebrating the 4th of July at the VP Fair and airshow. He and I once sneaked my dog Mo – who was a rescue dog – into a restaurant in East St. Louis, to have an impromptu lunch with Mayor Carl E. Officer.

My dad would take me on the best birthday trips. He introduced me to James Bond movies at the Esquire Theatre (#4 was the best), and we’d take endless late-night trips to Walgreens and Steak n’ Shake. I remember him driving my friends and me to and from Rosati Kain and Nerinx Hall dances; backstage passes at the Budweiser Superfest; inviting me on to the set at the Lou Rawls Parade of Stars; Venice Beach; Olvera Street; the United States Supreme Court; deep and funny conversations with him in his kitchen – big or small - he made all experiences memorable, educational and fun.

There was never a time when I was with my father that I did not have what I needed, when he wasn’t teaching me something, or when he wasn’t effortlessly generous.

Yet my dad never let me off the hook nor find comfort in mediocrity, and eventually – e v e n t u a l l y  – I became so thankful for that, because as he suspected, it forced me to learn how to meet and even exceed his expectations of me, expectations that pulled me out of my comfort zone and into the best version of myself.

My dad was everything a father should be: a protector, a role model, a provider, a confidant. He was my advocate. My friends were his friends, my foes were his foes, my loss was his loss, my wins were his wins. When I was scared, he was scared. When I was happy, he was happy. And when my heart was broken into hundreds of little pieces, he’d say, “See, I told you so.” (Smile)

I miss my father terribly. I miss the sound of his voice and his wickedly intelligent sense of humor. I miss his infectious energy. I miss hearing Chuck call him “Big Smith.” I miss him calling me Kymmy-Kymmy-Coco-Pop. I miss watching him shine his shoes …

My dad was proud of this city. And he was proud of each and every one of you. As a dear friend of mine so aptly described, my father “wanted more for people than from people.” Often humble about his own triumphs, he constantly celebrated the accomplishments and successes of others, even the wins of those who weren’t always kind to him. He lived his values, and his values transcended any one experience or any one person.

As heartbreaking as it is to let him go, I truly believe he’s found profound peace. When I look at my daughter, I can trace her strength and her smile directly back to my father. And then I smile, knowing that she is imminently capable of carrying my father’s legacy into the future.

I hope that you will always remember my father, that you will hold on to the positive experiences you had with him, the lessons you learned from him, and that each of you will pay it forward, that you will embody his best qualities for others.

The most wonderful way you could honor my father’s life is to be the best and most productive you that you can be and to help others do the same – to lift each other up and to want the best for each other without reservation or envy.