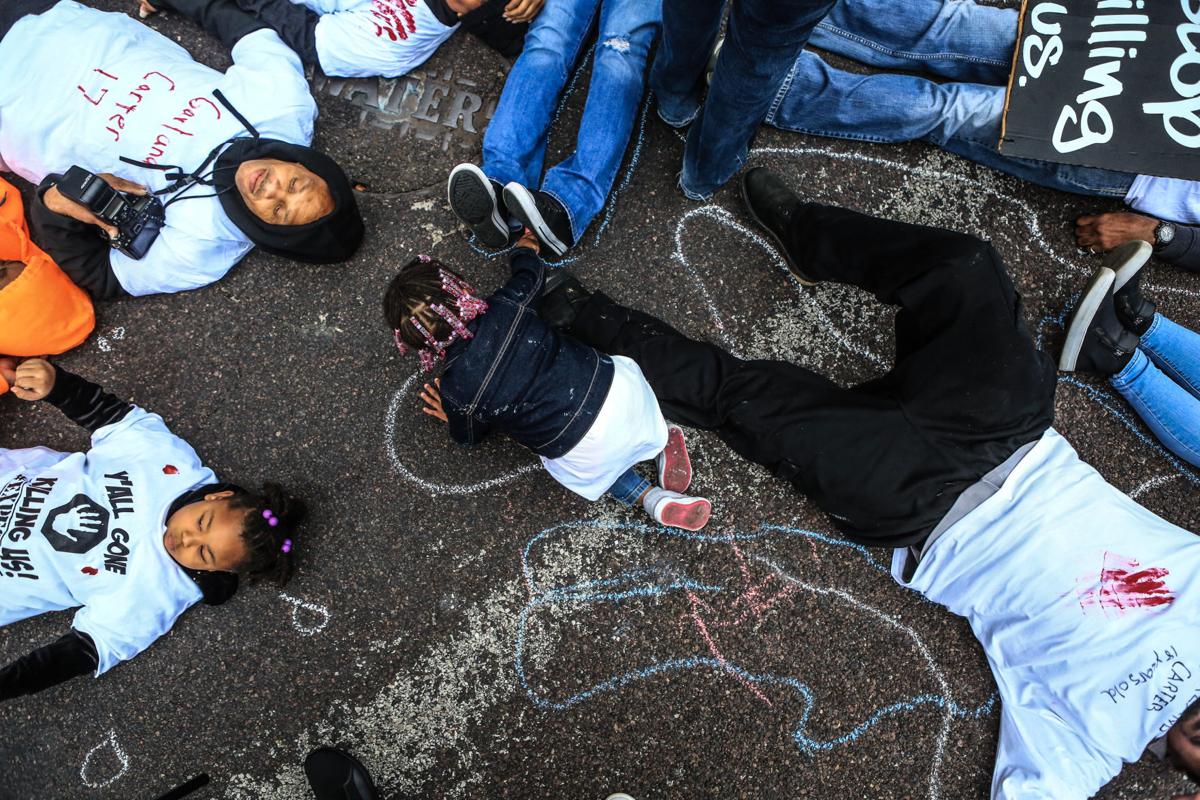 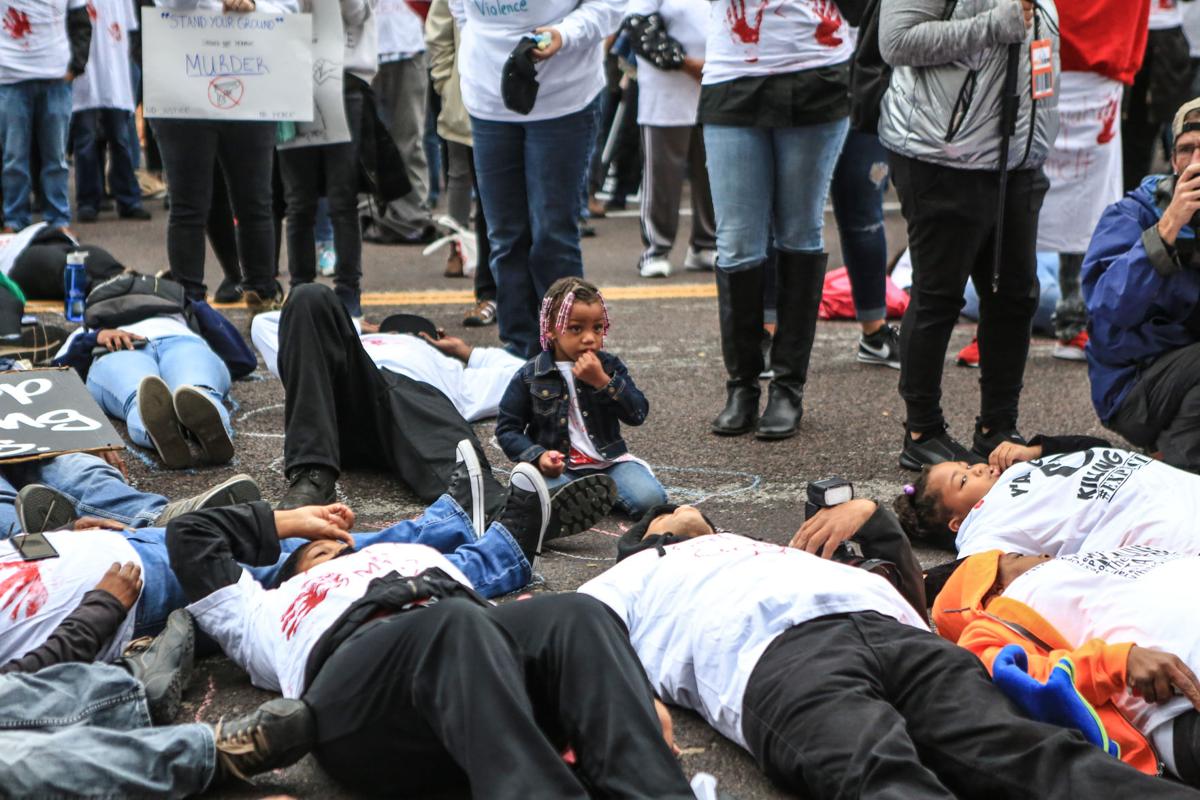 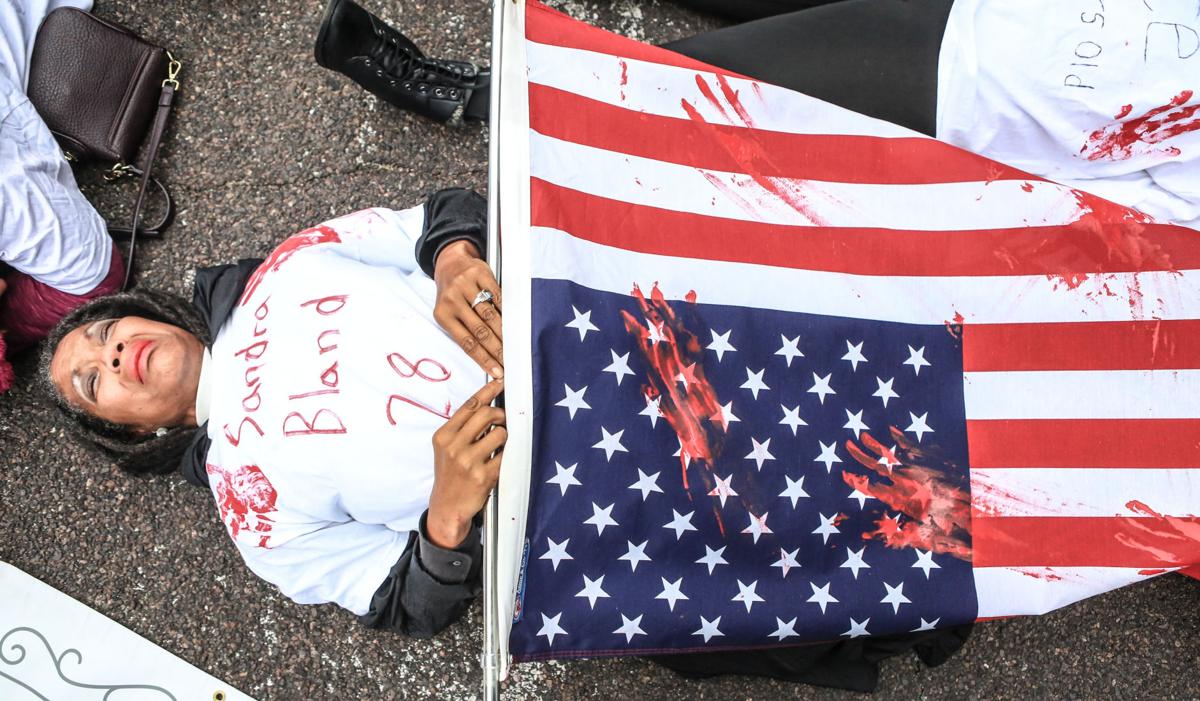 The hundreds who gathered in front of the St. Louis Metropolitan Police Department Headquarters at 20th and Olive were busy preparing for their latest action Sunday afternoon.

Those with extras were already wearing white tee shirts with the name of an individual who had died at the hands of police written across the front. Red paint – some with handprints – was smeared across some of the shirts.

Melissa McKinnies walked through the crowd and randomly asked for more information about the names on their shirts.

Toni Taylor had the name of her son, Cary Ball Jr. on the front of her shirt – along with his age when he died – but she spoke of 14-year-old Andrew Joseph III and Gary Joseph Jr.

After a few descriptions, it was time for a die in.

“The red stains on your shirts, as we know, represents the blood that has been shed repeatedly at the hands of people who are supposed to protect and serve,” Cori Bush said. “Let’s lay that blood before them right here.”

The people of color were directed to the ground. The white people were asked to stand around those who simulated death.

“When we say, ‘silence is violence,’ we mean it,” McKinnies said. “When you know about it and don’t speak about it, that’s just as bad as doing it.”

The moments that we share together to speak out against these injustices are just moments – but in a moment, our lives could be gone. It’s fake blood on the ground right now. But there can be real blood tonight.”

LaShell Eikerenkoetter talked about being at the recent county council meeting and that there was a feeling from the police there that there was a war between them and the people who say black lives matter. She also praised the many white people who continually show their solidarity in the protests.

“You standing out here with us is such a big deal because they don’t stand with us,” Eikerenkoetter said to the white people while pointing at the police building. “It is important for you to stand with us to show that this is not make believe. As Melissa said, as Cori has said. This is real. We can see the family members faces. The pain is real.”

Protesters were asked to imagine the pain of the families.

“I know how it feels to lose a child,” McKinnies said. “But not to lose one because the police are so careless and murderous and cowardly – and there’s nothing you can do about it. As I look around, I see a lot of my people that I love so dearly on the ground. I see my husband on the ground. This is pain.”

Carlos Ball and his mother were lying there too. It was a pain they didn’t have to imagine.

McKinnies heard Carlos talking as she walked past him on the ground and urged him to share his comments.

Just as the rain began, those who were on the ground got up. Chalk outlines of their bodies remained in front of the department.

Families of those fatally shot by police to come forward.

“We don’t know what it’s like to be villainized, to be criminalized, to be scrutinized,” Bush said. “For your loved one to be made out to be this demon and for you to be hurt by the people who should be rallying around you. We don’t know what’s that like, so we salute you.”

McKinnies said it was important for the protesters to understand what the families go through daily.

Toni Taylor, the mother of Cary Ball Jr. was up first.

She vividly recalled the circumstances of her son’s death on April 24, 2013.

“They shot at Cary 32 times, so that means that one officer reloaded,” Taylor said. “Of the 32 rounds, 21 actually hit his body.”

She spoke of the craters that are still on the street due to the bullets that were fired at her son.

“When we were laying on the ground and Carlos was speaking, I started to cry,” Taylor said. “I was thinking about how that’s how he laid when he took his last breath. I been in this fight for justice for four years. I’m here for justice for all. I My heart cries on the inside. Some days I don’t’ even want to get out of bed.”

She then led the protesters in one of their own chants.

“I believe that we will win.”

As the rain came down, McKinnies called the drops, “God’s tears” before she called the family of Isaiah Hammett up to speak.

Gina Torres, who is white, said her son Isaiah Hammett was killed on June 7 after a “no-knock” search warrant.

Her father witnessed him being killed.

Torres said that 130 rounds were fired into the house – and that police were shooting through the window before they entered. She said they shot all around his son’s bedroom.

“My son lived through the bullets in his bedroom to run to my father in the other room,” Torres said.

“He put my father on the ground and told him to lay down, because he thought somebody was breaking in. My father asked, ‘who is shooting, Isaiah?’ My son’s last words to him was ‘I don’t know grandpa. I love you.’”

Torres said he entered the dining room, where he said, ‘please don’t shoot.’

“Those were my son’s last words – in his own home. Not out here in the streets, but in his home – in front of my father.”

Torres said that she just got her son’s death certificate on October 20th, and the cause of death is listed as homicide. She told the crowd that she and her family have been harassed for trying to get to the bottom of what happened.

“I don’t know who killed my son – they could kill me too,” Torres said. “But I don’t give a [expletive], excuse my language. I’m not going nowhere. I’m going to be out here in these streets until I get justice for my son – and not just for my son, but every other mother out here…and the next kid that they are going to try to kill.”

Though she now lives in St. Louis, Nadida Matin's son Abdul Kamal was unarmed when he was shot 13 times in New Jersey.  Matin said the officers who fatally shot her son did not face justice and were eventually promoted.

“Sgt. Gonzalez and Officer Cadet Knowles and Johnson said that they didn’t even think they saw a gun, they just thought he had one,” Matin said. “He was 30 years old with a young daughter. That’s why I’m out here.”

Matin said that because her son’s death in 2013 in New Jersey took place 800 miles from where Michael Brown and VonDerrit Myers Jr. were killed the next year, she feels that the country is dealing with a systemic crisis.

“As many of us that are out here there are still not enough bodies that lay in the street to show the ones they have left in the street,” Matin said. “This pain don’t ever go away,” Matin said. “Every birthday, there it is. Just waking up it gets really, really hard some days. But I’m not giving up. Expect me, expect us. We’re not going nowhere.”

Raise you kids right and they won’t get shot by police. I have never seen a video of police roaming the streets looking for people to shoot.

The carbs are worth it on Netflix’s series ‘Bridgerton’