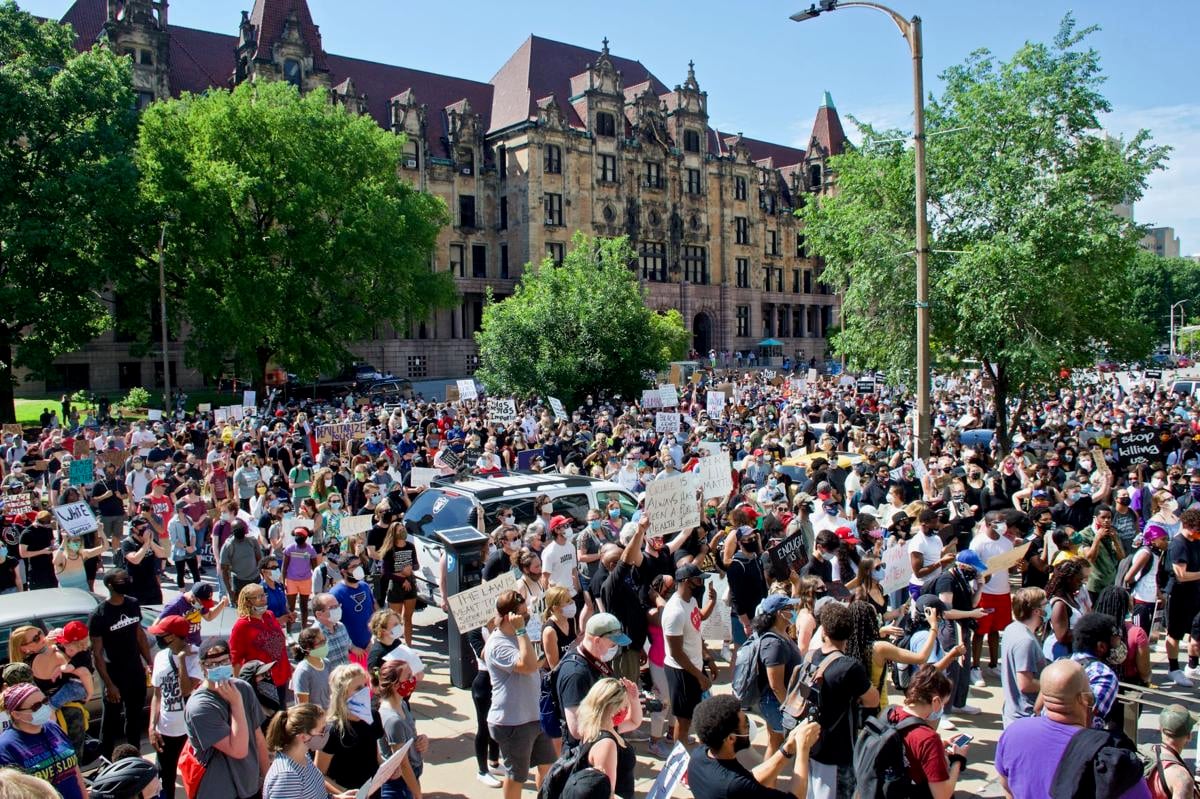 Protesters march through downtown St. Louis during a demonstration against the police killing of George Floyd in Minneapolis on Monday, June 1. Photo by Wiley Price / St. Louis American 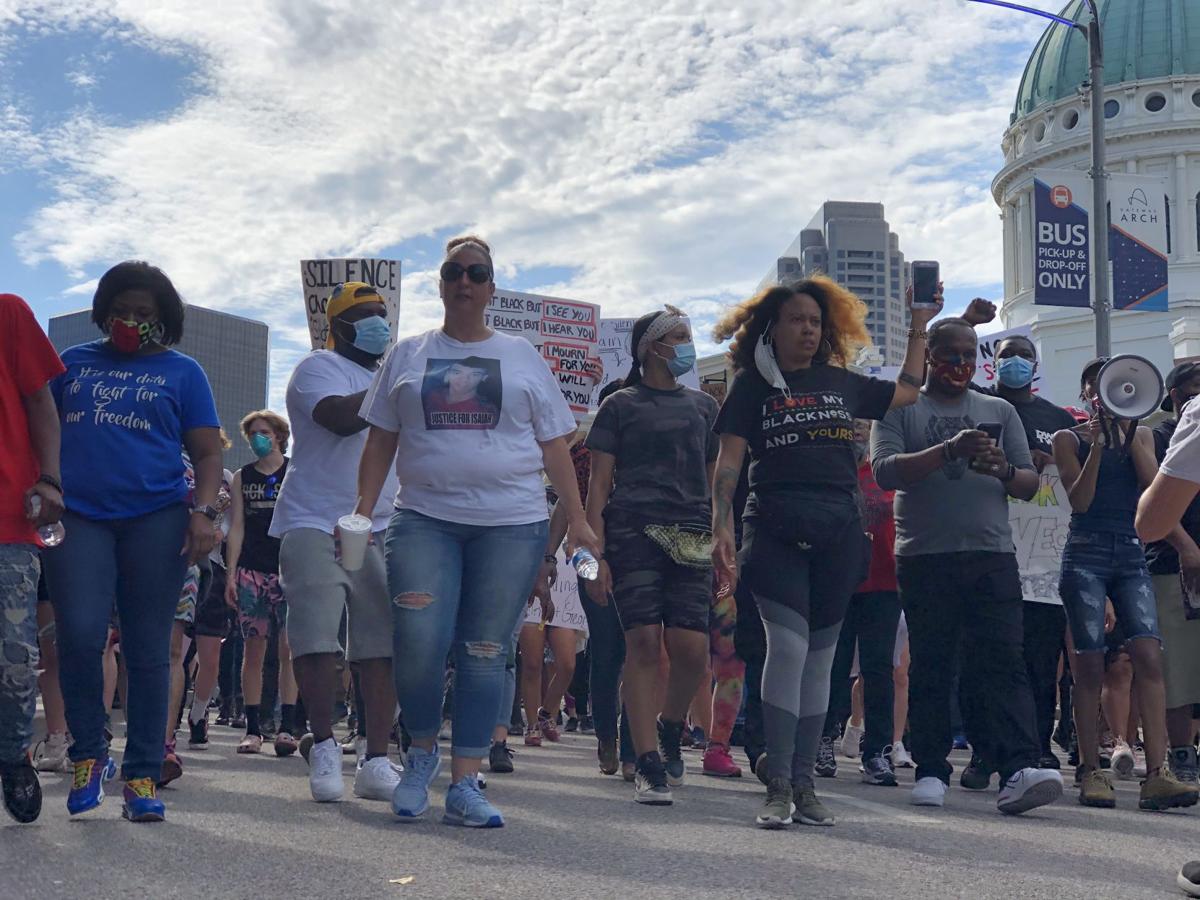 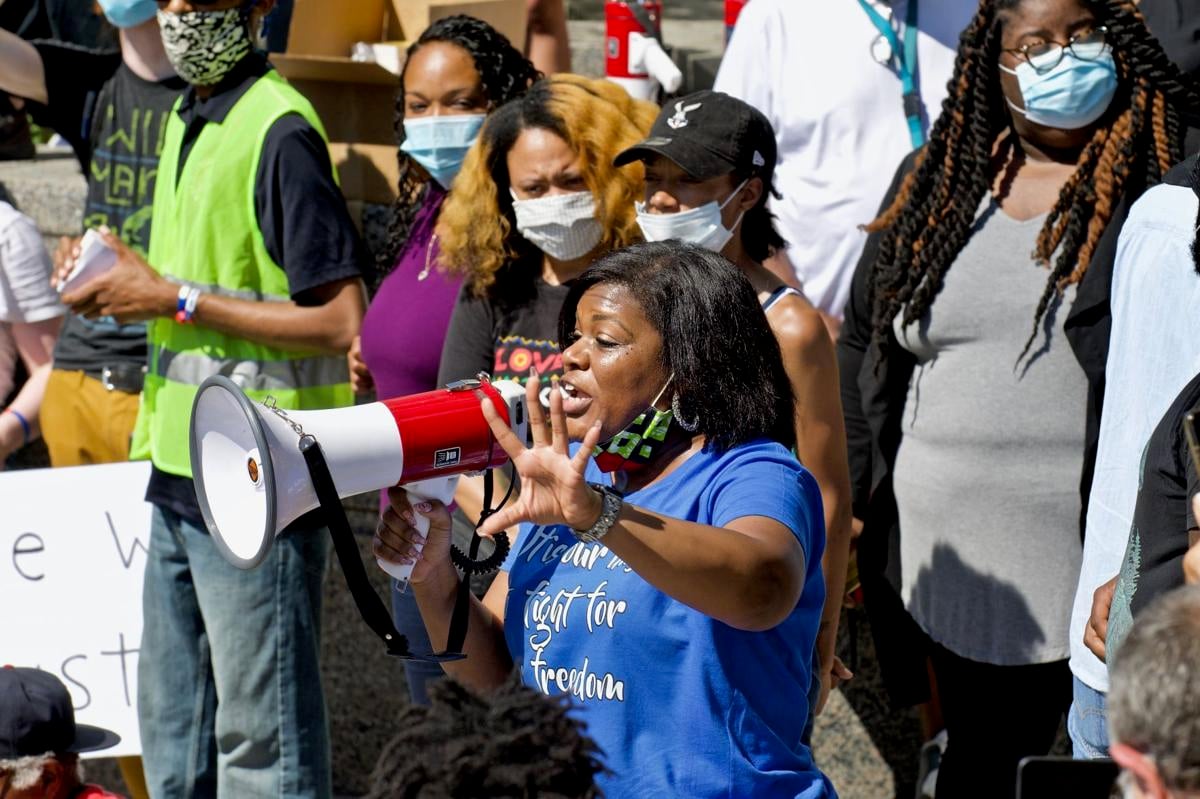 Protesters march through downtown St. Louis during a demonstration against the police killing of George Floyd in Minneapolis. Photo by Wiley Price / St. Louis American

Protesters march through downtown St. Louis during a demonstration against the police killing of George Floyd in Minneapolis on Monday, June 1. Photo by Wiley Price / St. Louis American

Protesters march through downtown St. Louis during a demonstration against the police killing of George Floyd in Minneapolis. Photo by Wiley Price / St. Louis American

Hundreds marched in downtown St. Louis on Monday, June 1 in ongoing protests against police brutality and the killing of George Floyd at the hands of Minneapolis police.

“If we gonna have to be in the streets during COVID, then we’re going to be in the streets,” Kayla Reed, co-founder and executive director of Action St. Louis and a Ferguson protestor, told the crowd. “During a pandemic, nobody should have their knee on any of our necks. There’s not enough respirators.”

Masks, a common sight at protests, now had another protective function as many protestors followed public health guidelines and wore protective masks.

The protest, organized by a collective called “Expect Us,” started in front of the St. Louis City Justice Center with chants then marched throughout the streets. The groups organizing the action include Action St. Louis, Metropolitan Congregations United, Missouri Faith Voices, St. Louis Action Council, St. Louis Clergy Coalition and others.

“We want the demands that we ultimately take to the government to be the people’s demands,” said Rev. Darryl Gray, one of the organizers and a longtime civil rights activist. “We want the people to speak. If the riot is the voice of those unheard, as protest leaders and advocates and activists we want to make sure we are listening.”

As part of the action, the group walked down to the Gateway Arch and wrote their demands on sticky notes and placed them on the national monument.

One list of demands circulating in the crowd included decreasing spending on the police department, which currently makes up more than half of the city’s budget. It also included demilitarizing the police, closing a notorious city jail known as the Workhouse and freeing political prisoners.

The united focus of the #ExpectUs action is nonviolent civil disobedience, organizers said. However, Gray said, the words “peaceful” and “violent” have been misused to distinguish the two kinds of demonstrations in St. Louis and across the country. Gray made a distinction in how words should be used to describe protestors.

“We don’t expect any of our actions to be peaceful,” Gray said. “We have been peaceful for too long. We need to shake the tree, but that doesn’t mean burn down the tree. Buildings can be rebuilt, but people’s lives you can’t bring back.”

The marchers continued through the streets of downtown and convened at the Arch grounds. The diverse crowd held signs that read "Black Lives Matter" and other messages while chanting.

"No justice, no peace! No racist police!" the group shouted as they made their way to the Arch.

Upon arriving, activists used sticky notes to post their demands for justice on the Arch. They then proceeded to march onto westbound I-64. “We’re not out here just to be on top of the highway,” said state Rep. Rasheen Aldridge, who was also a Ferguson protestor. “We’re out here because we are still grieving for lives and lives and lives.”

The massive group of demonstrators ended the action with closing remarks from Gray.

Younger activists stayed in the street after the Expect Us action ended. It was largely a group of black protestors with some white allies. Clara Holmes, who organized one of the first George Floyd actions on Thursday, May 28, was one of the impromptu organizers of this follow-up action.

“If you’re 25 years of younger, this is your movement!” a young organizer who identified himself as Kenny said. “You all have a role! Know your role in this movement, but whatever you do, do not lose momentum.”

Kenny tried to harness and control some of the crowd’s seething energy. “We need to plan, let’s not let this fizzle out,” Kenny said. “We are not prepared to face the police head-on. That’s the last thing we need. We need to stay cohesive to one plan.”

A young woman protestor who did not give her name joined Kenny at the makeshift podium. She spoke to both the diversity in the crowd and the awareness that some white protestors might present themselves as Black Lives Matter “allies” but have their own agenda.

“It’s a lot of white folks in the crowd,” the young woman said. “You’ve got to understand and respect your place in this war. Some of you think it’s Hunger Games. Do not come up in here trying to start your own struggle.”

There is sensitivity among organizers to be identified by name. A number of Ferguson protest leaders have lost their lives since 2014. Two St. Louis protestors have just been charged with crossing state lines to incite a riot after livestreaming their road trip to join protests in Minneapolis.

The police let the younger group march mostly undisturbed until around 8 p.m. when some protestors busted up two SUVs from the Sheriff’s Department. A number of police vehicles then advanced and dispersed the crowd, with a group of protestors forming around 9 p.m. at St. Louis Metropolitan Police Department Headquarters. When police dispersed that crowd with tear gas, some protestors formed a barricade at 18th and Olive. Some of that group looted the 7-11 on North 17th Street, and it was set on fire.

Some of the clarity of the organizers’ intense speeches may have been lost in the chaos, when Kenny tried to focus their anger for the long haul.

“This is your movement,” Kenny had said, when first addressing the younger crowd. “This is your power we must show. Because if we don’t do it now, they will never stop killing us.”

Kenny’s advice that the protest movement is “not prepared to face the police head-on” was prophetic. While they were marching on the streets of St. Louis, President Trump threatened to invoke the Insurrection Act of 1807 and deploy U.S. troops to respond to protests.

And though there was no direct attack on police, a police spokesman announced just after midnight that four police officers had been shot and others were still under fire downtown. Police Chief John Hayden said he suspect that shots were fired at the police line working the protest.

All were conscious and breathing. Their injuries were believed to be non-life threatening.