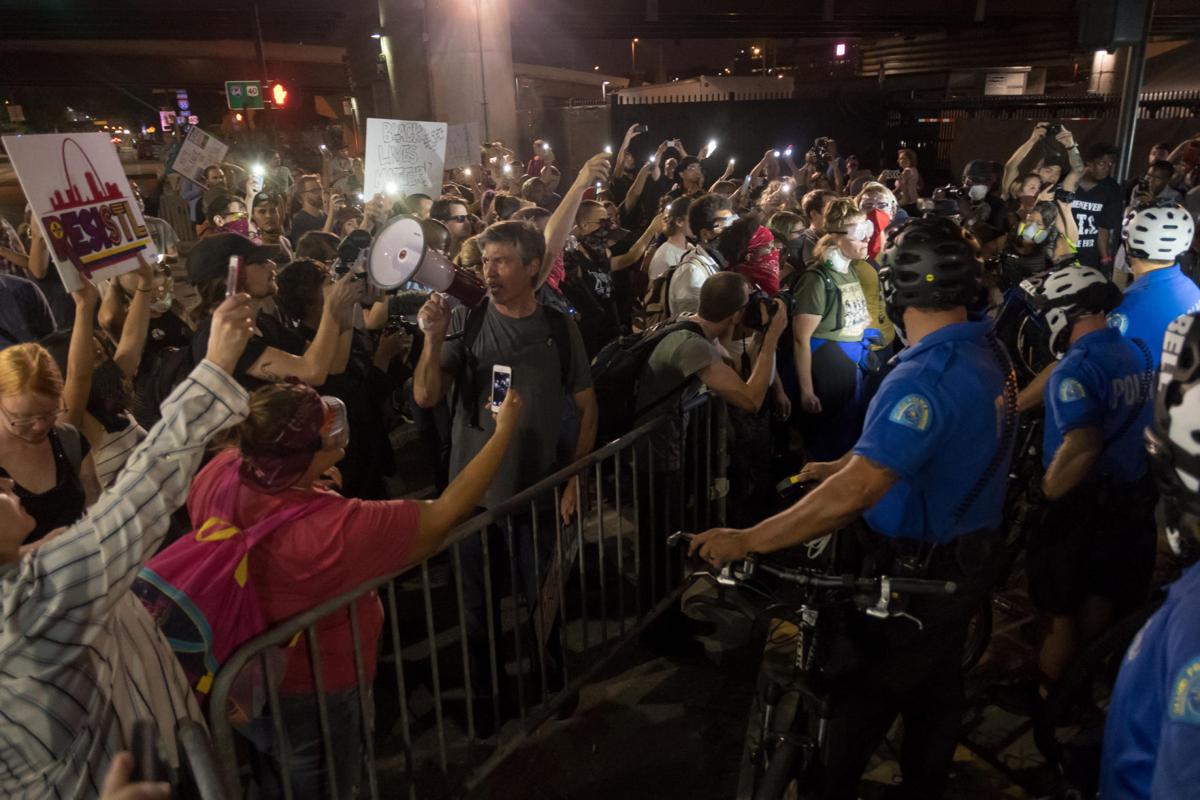 Protesters chant at police Thursday night as they block the gates of Busch Stadium during a protest over the acquittal of ex-police officer Jason Stockley on murder charges. 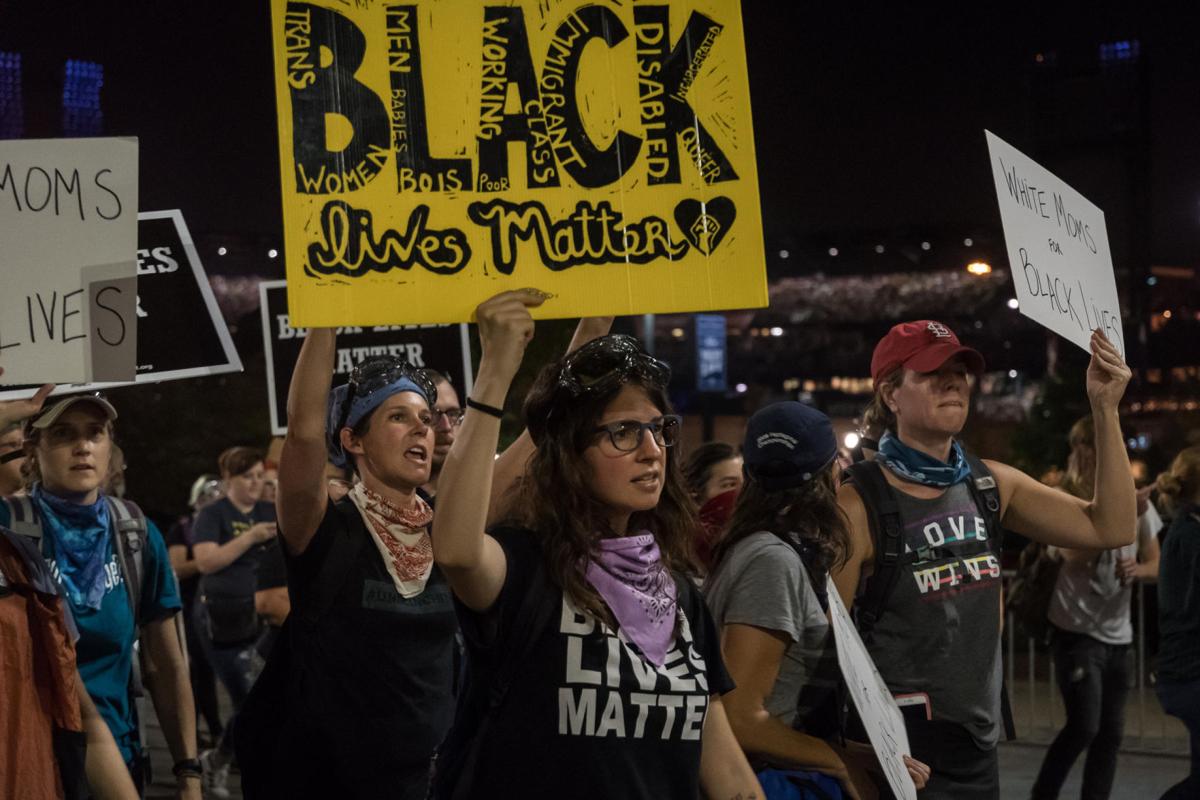 Protesters walk toward Busch Stadium during a 'white allies' rally Thursday night. The demonstration blocked two gates to the stadium during a Billy Joel concert. 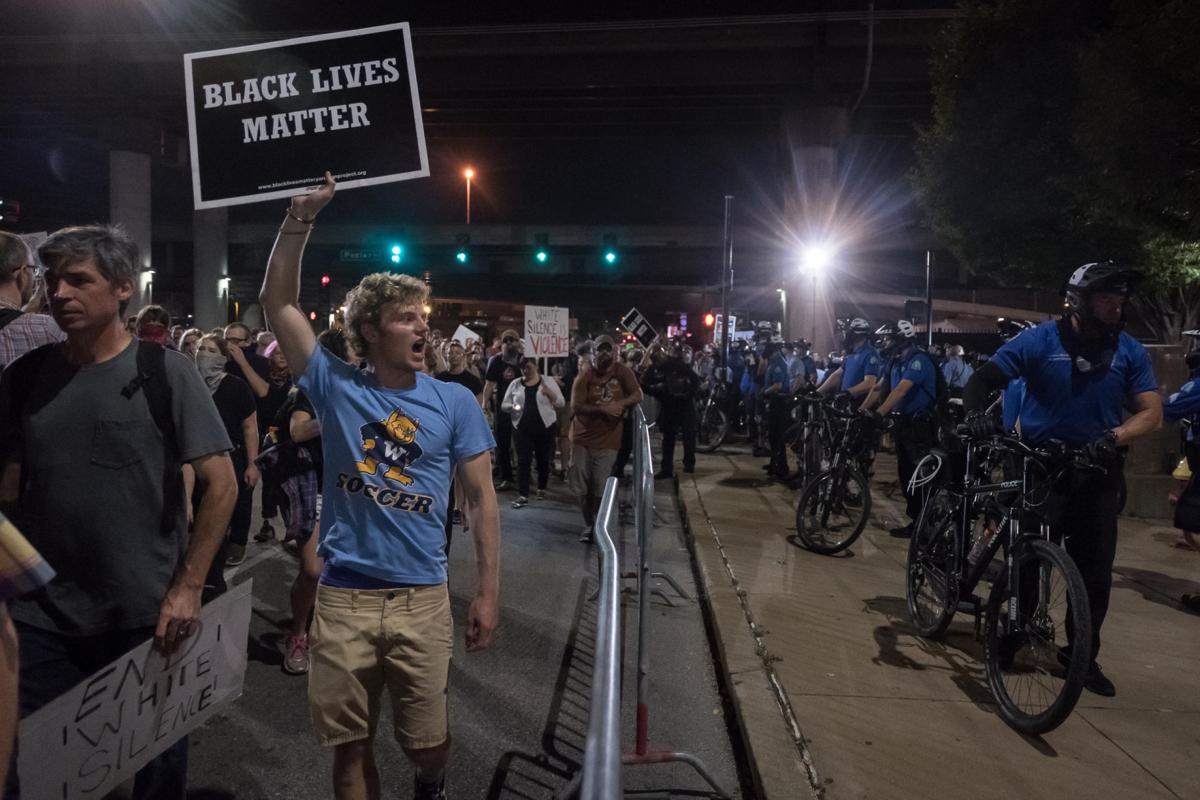 A "white allies" protest descended on Busch Stadium Thursday during a Billy Joel concert to protest the acquittal of ex-police officer Jason Stockley on murder charges.

Protesters chant at police Thursday night as they block the gates of Busch Stadium during a protest over the acquittal of ex-police officer Jason Stockley on murder charges.

Protesters walk toward Busch Stadium during a 'white allies' rally Thursday night. The demonstration blocked two gates to the stadium during a Billy Joel concert.

A "white allies" protest descended on Busch Stadium Thursday during a Billy Joel concert to protest the acquittal of ex-police officer Jason Stockley on murder charges.

What a difference a day makes. Twenty-four hours before a nearly exclusively white crowd of protestors shut down Broadway for a couple of hours on the night Billy Joel took the stage at Busch Stadium, riot cops in full formation demanded that a racially diverse group of protesters clear the street immediately or face arrest.

“We respect your right to protest, but blocking the street makes it an unlawful assembly,” a police officer said Wednesday through his vehicle’s sound system to protestors marching down Brentwood Boulevard in Clayton. His words came just before the demonstrators were forced to retreat to the parking lot or face the wrath of the riot cops. A few of them even followed the protestors to the side of the parking lot, where protestors chanted, “We don’t see no riot here, why are you in riot gear?”

The riot police stood in a line blocking Brentwood as the protesters scrambled back towards the mall – where they had been demonstrating. Police left after seeing the protestors had no intention of returning to the street. And just like that, the street protest was over.

Thursday night, it was decided that there would only be white protestors demonstrating. There were a few black protestors off to the sidelines. They met in Kiener Plaza. They marched to the middle of Broadway as traffic buckled because of Joel’s show. They stood there holding signs. They chanted, “White silence is violence,” “black lives matter,” “no justice no peace,” “no justice, no profits,” “if we don’t get it, shut it down.”

There were riot cops and tanks hidden in several pockets downtown. None of them ever emerged from their respective stations to confront this enormous group of demonstrators. Instead, the white protestors were met with a long row of bike cops who stood between the barricades around Busch Stadium set up to block protesters from bombarding into the stadium.

It was inspiring, almost breathtaking, to hear hundreds of white people march through downtown St. Louis – on a night where more than 40,000 people, mostly white, came downtown to see Joel– and proclaim that “black lives matter.” But it was just as disheartening, and frustrating, to see what happened – or didn’t happen – as they stood boldly on behalf the injustices that black people endure.

They were free to block the street, free to chant and voice their frustration with systemic racism and police brutality against people of color. And after they were done, they were free to go home. None of the tactics that protestors have been terrorized with since the start of non-stop protests in response to Jason Stockley’s first-degree murder acquittal – or a few years before in Ferguson – were a part of the program.

The irony wasn’t lost on the few black people who stood on the sidelines in support of the white people for black lives. “Man, if we were up there like that, we woulda been pepper sprayed, chased off and arrested by now,” a member of The Lost Voices, a group of protesters from Ferguson, said as the protestors carried on. “This is straight-up boring.”

The protestors occupied Broadway for close to two hours. Concertgoers who approached the sidewalk where the black protesters supporting their white allies were stationed maneuvered through the thick of the protests to avoid them.

“We’re just trying to go to the concert,” one of the few who braved the sidewalk said to the group. “We don’t want any trouble.”

“Man, ain’t nobody thinkin’ about you,” a black observer yelled back. “Your cousins the ones over their protesting. Go tell it to them.” The man scurried forward as fast as he could – almost breaking into a full-on jog.

The black observers were keen to their surroundings. They noticed a group of riot cops on the other side of the parking lot that separates Busch Stadium from 4th Street. “If things get crazy, let’s go that way,” an elder of the observers said, pointing south on Broadway. Things never did get crazy.

It was a sight to see.